Lynda Hallinan shares the less-than-glamorous reality behind a photoshoot for NZ Life & Leisure, one involving cantankerous chooks and reluctant roosters.

On the days when I drop my kids off at school sporting tidy tresses, a pancaked maquillage and any outfit other than a t-shirt and trackies, the other mums at the coffee cart know something is up.

“Oh,” I’ll shrug with a humblebrag air of nonchalance, “I have a magazine photoshoot today.”

Trust me, that sounds far more glamorous than it ever is, although a few Christmases ago I did swan about in a full-length red-sequinned ballgown for an Australian Women’s Weekly spread, alongside Outrageous Fortune actress Antonia Prebble, TV presenter Wendy Petrie, feminist songstress Lizzie Marvelly and a fresh-faced politician being tipped for big things. Her name, as I recall, was Jacinda Ardern. Lynda’s husband Jason hefted the hen house up on his JCB but drew the line at having his photo taken sitting in the driver’s seat.

Fast forward five years and Jacinda’s a global icon while I’m, ahem, posing with cantankerous chooks and increasingly petulant children who refuse to hold still while Mum tries to get a good shot of her latest skyscraping sunflower or prize-winning pumpkin.

In my 20-odd years as a gardening guru – a description that always makes me feel like I should be living in a teepee spouting philosophical mumbo-jumbo while the menfolk tend the fields and my gal-pals fuss over a flock of free-range children – I’ve become accustomed to patiently posing with animals, vegetables and minerals. (Those minerals are mainly nitrogen, phosphorus and potassium, aka the bog-standard ingredients in any bag of garden fertiliser, with the occasional sprinkle of copper, manganese, boron and molybdenum for good measure.) Acting the goat is all in a day’s work for the neighbour’s flock of friendly angora.

Now when most people think of magazine photoshoots, they probably think of highly strung fashionistas working for Vogue and Vanity Fair, or scenes from movies like The Devil Wears Prada, but when I modelled with my new hen house in the Nov/Dec 2020 issue of NZ Life & Leisure (out now), the devil wore black feathers with a wobbly wattle and sharp spurs on his scaly legs.

One of our heritage roosters took exception to the rounding up of his hen harem en route to their Wild West-themed abode, and had a crack at me. At least he didn’t have a go at photographer Sally Tagg; when she papped our pet ram-lamb Tiki earlier this year, he eyed her up down the camera lens, charged straight at her and fractured her ankle.

I administered hot tea and sympathy, bandaged her up with arnica cream and – to my enduring shame – jollied her along to carry on shooting all day. 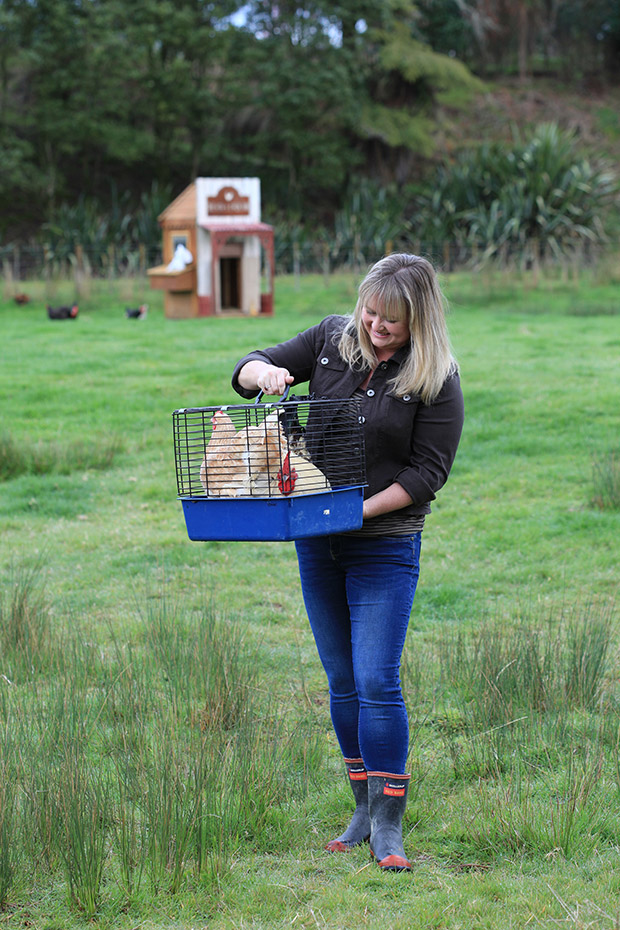 Lynda’s hens were less than impressed with their cramped mode of carriage, but they’ve happily made a home for themselves at The Hen and Chick Inn.

When I’m on a roll, I can be quite persuasive. My husband Jason reckons I am “difficult and demanding”, but really, I don’t find it difficult to demand his help with my DIY projects. I consider us a creative design-and-build team; I design things and against his better judgement he begrudgingly finds a way to build them.

Our new hen house is not the first love shack my husband Jason has built for our free-range chooks, but it’s definitely the fanciest Banty Shanty. A decade ago, he turned the old wine barrels we used as bar leaners on our wedding day into a three-storey hen hotel affectionately nicknamed Coq au Vin, and I also have a portable chook house with a 2m x 2m netted run designed to slot over my raised beds. When the veggies come out, the chooks go in to scratch out weeds and fertilise the soil for its next crop. 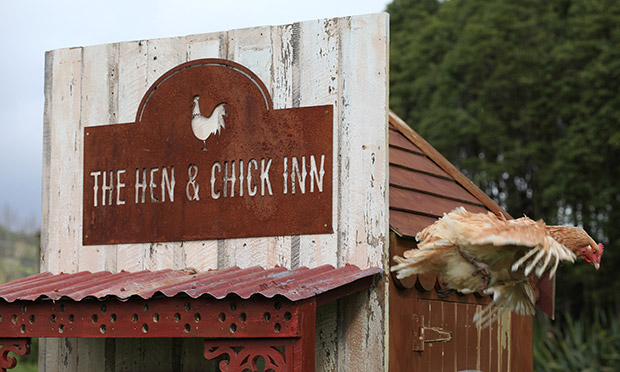 Free-range chooks, it seems, don’t take kindly to being told to sit still and smile for the camera.

Construction work on our new hen house began during the lockdown. Jason built it on our driveway, within reach of power cords and his toolshed, but by the time it was ready to relocate into the paddock, it was too heavy to budge.

“I’ll get the JCB,” said my man. “The JC-what?” I called after him. Minutes later he trundled back up the driveway in his JCB Construction Loadall Telehandler (a sort of high-tech hybrid of a forklift, digger and tractor rolled into one), hitched it up and hauled it off down the road to its permanent home.

I went ahead in a high-vis vest, car hazard lights flashing, a chook cooing nervously from the pet cage on my passenger seat. My friend Debbie from Puriri Lane Nursery happened to be out our way delivering plants at the time. “I just passed a chicken house driving down the main road. Is that yours?” she texted. 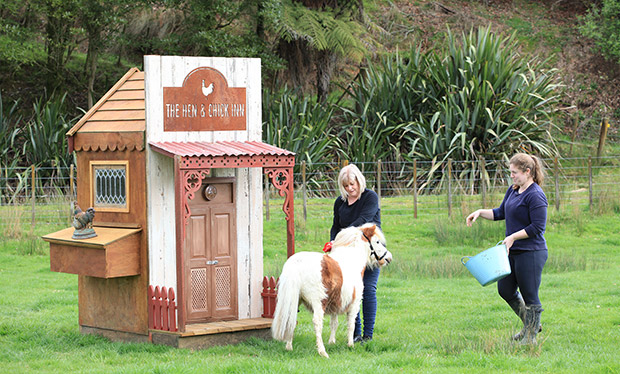 Horsing around: Keith, the miniature pony from next door, came with his own catering and hairstyling crew… his owner Kate and her mum Fiona.

With the hen house safely deposited in the middle of its paddock, Sally Tagg arrived to photograph it. But first I had to catch all its tenants and this proved harder than it sounds. The first few hens were a doddle to pounce on as they pecked at a bowl of grain, but as their number diminished, they became increasingly suspicious of the sight of me. Two pecked me and a third shat on my jacket, requiring a fistful of baby wipes and an emergency blast with the hairdryer.

Initially, I thought about lining the ladies up all along the roof of The Hen and Chick Inn, but they had other ideas. It was a wonder we managed even one take of the photoshoot. At least Keith, our neighbours’ adorable miniature pony, put on a star turn. Granted, he was easily bribed with the sniff of a feed bucket just out of shot. To say that Lynda’s rooster was a reluctant photoshoot participant is an understatement. He took umbrage at all the attention and attacked her.

I should also have thought to borrow a few angora goats from up the back, as every time they’re let in to graze the paddock, they evict the chickens and move in themselves. Last weekend, I counted nine mohair misfits squatting inside the house with four more chewing their cud on the front porch.

Unless, of course, you have a camera handy to capture all the outtakes.

Lynda Hallinan’s Blog: The charm of a barn

Lynda Hallinan’s Blog: How to sprout a kūmara in no time at all