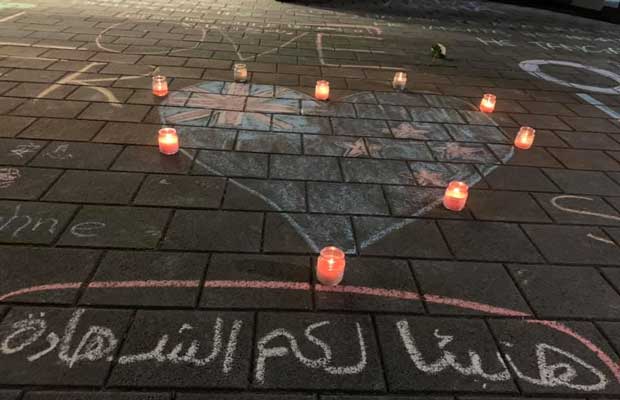 Let the bullet-holes blasted through the fabric of New Zealand society on Friday be a call to lovingly take the hands of strangers, writes Polly Greeks.

It was an intense weekend; heavy in weather and heart. The heat had been building beneath brooding skies since Friday morning. Then the news: 50 dead in the Christchurch mosque shootings and on Sunday a phone call: a friend had died in a boating accident.

My grief at the mass-murder is blunt and wide. It extends past each pointless termination of life and beyond the Islamic community’s sense of persecution.

Seen from above, every one of those deaths is a fallen star – extinguished and radiating black filaments of pain, loss, anger and sadness from its centre. Collectively they’ve cast a web across New Zealand. Like so many others, I grieve in the newly formed shadow – for the bullet-holes blasted through the fabric of our society.

This is not who we are.

We don’t take weapons and randomly slay crowds of innocent people going about their business because we disagree with their beliefs. Nor do we behave in hate-filled ways that result in certain New Zealanders being afraid to express their identity.

Yet it happened all the same. And if we really want to ensure such an event never occurs again, we must accept it as part of our history and allow ourselves a moment of self-reflection.

How did we get here and why? Plenty of prejudice lurks in New Zealand; against Maori, Pacific Islanders, Africans, Indians, Americans, Muslims and against Asians – particularly the Chinese. Look at our history of racial discrimination; sexual, xenophobic and religious intolerance. Even this most horrendous act of violence in Christchurch began with a seed; the planting of a belief that ‘they’ are not us; they’re the ‘other’ and for whatever reason, are to be feared. Who sows these seeds? By what means are they allowed to disperse, grow and perpetuate?

The media’s long-term portrayal of the Muslim world as the ‘enemy’ has done its damage. Add the culture of violence subscribed to by so many online gamers; the echo-chambers of Facebook and other online forums reinforcing any particular take on reality; the availability of semi-automatics, our tolerance of casual racism, our layers of cultural segregation and the cracks through which our mentally unwell are falling and the probability of a perfect storm starts to grow.

This is not who we want to be. How do we mend something broken? How do we cleanse something seemingly decent that’s been corrupted?

Friday’s killings were meant to spread fear and hatred. Instead New Zealanders have turned the attack on its head and are generating love. Their outpourings towards the Islamic Community shine like a shaft of light through the darkness. People everywhere are taking the pain and grief of the Muslim population and making it their own.

Let’s continue reclaiming last Friday by reaching out next to take the hands of strangers. It’s harder to harm something or someone once it’s known. Absorbing the other doesn’t mean swallowing their identity. Different words for assimilation are embracing, understanding, learning and adapting. They aren’t alien; they’re you and I; just clad in different clothes, customs and skin.

Love in its pure form is an act of receptiveness; accepting, opening and giving. Fear is its opposite, with its contracted, narrowing smallness and separation. Terrorists want to wreak terror but deep down they’re the ones caught in its grasp. We are not that.

My grief for the loss of our family friend is sharper and deeper; but also surprisingly clean, like a cut from a filleting knife. However, this death is tinged with remorse. We’d been meaning to have him up for a meal since before Christmas and life had just gotten busy.

That’s not true. Life is always busy. We hadn’t stopped to make the time.

A psychologist on the radio last week spoke of regret. He said women tend to regret actions related to relationships. Men were more likely to regret decisions relating to work. Then he said closer examination usually revealed most people never actually had the options available which they’d based their regrets around. Because of who we are, there’s not as much room to move as we think.

A friend confirmed how little freewill we might possess with a visit to an Indian palm-reader. To her astonishment he read the events of her past with such detailed accuracy, she suspects his future predictions will also be spot-on. Most lines on her hand have been with her since birth; a predetermined map set in skin before she’d barely started the journey.

The prejudices and beliefs of our culture start to shape us before we are even aware.

For some this will contribute to their suffering and isolation but for a little nation asserting to its children that a brutal act of intolerance is not part of its identity, this conditioning might just help us eventually reach that level of harmony to which we aspire.