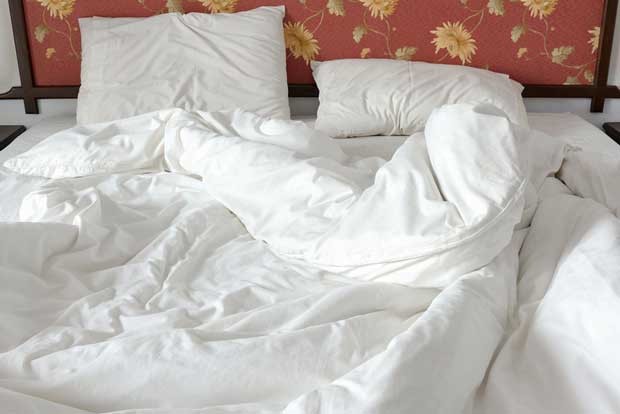 Polly laments the communal bed while a new DIY feature window brings some unexpected lessons – and just a little pain.

Some years summer arrives in our valley with the force of a jumbo jet, blasting the air with shimmering heat as the golden sunshine comes down to land. Overnight we realize the season has changed and the knowledge brings long inhalations of joy as we fling open windows, peg back doors and settle into outdoor living.

It’s tempting to put up the tent and sleep outdoors too, if just for the pleasure of corralling the children into a corner where they can undertake their nightly thrashings away from their parents’ heads.
We are a co-sleeping family. We became one, academically, before the children had even arrived when a friend handed me a slim volume called The Continuum Concept. In it, the book’s author spoke passionately of the need for babies to be in permanent contact with their mothers night and day, citing a South American forest tribe who apparently produced emotionally impeccable children.

Enamoured with jungle-style parenting, James and I embraced the model and shifted apart in our caravan bed to make way for our new baby. That was five years ago. Since then, we’ve gained a son and a three-roomed house-in-progress but we remain a co-sleeping family out of necessity. Bed in our home is a collective arrangement on our mezzanine floor. 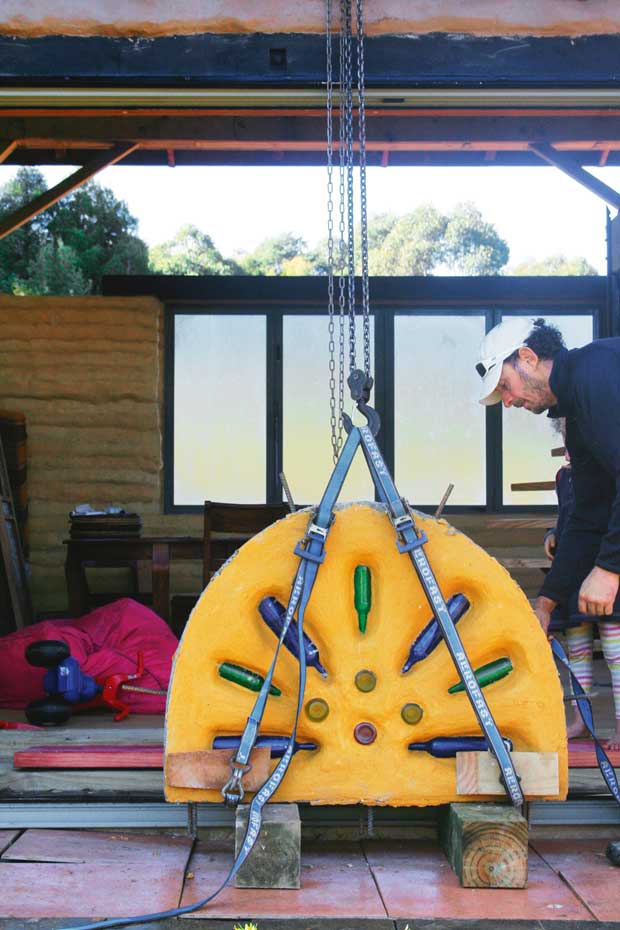 While it can be cosy and fun, James and I have tired of the communal bed. “Do South American jungle children sleep like ours,” we wearily wonder as we’re repeatedly thwacked in the head by this or that somnambulistic windmilling limb? Unfortunately, we can’t evict the kids from our bed until they have rooms to go to. And before that happens, we need to complete what’s become known as the “wailing wall” – the front mud-brick wall of our new lounge.

The latest in its string of headache-inducing complications came about following my desire to add a feature window above the bi-folding door. After seeing what stained glass fetches on Trade Me, I decided we’d opt for a DIY version using coloured glass bottles and jars. Incredibly, Google was silent when I asked for building guidance.
“Not to worry,” James told me, stretching his can-do muscles. Using flexible boxing, he formed an arch, backed with a sheet of ply. We laid the glass out in formation and half buried it in sand before sculpting fibre cement around the exposed bottles. As it dried, we congratulated ourselves on our cleverness and wondered aloud if we should film ourselves in action as a lesson to put up on YouTube.

Once the cement had dried, we flipped the window over, removed the sand and fibre-cemented the other side of the bottles in place. Two days later, it was ready to be raised.
“When I say ‘lift’, we’ll place it gently on the wheelbarrow,” James instructed me.
“Lift!”
???
We heaved again, but it wouldn’t budge.
Our latest Japanese wwoof-er, Junya, was summonsed and with a lot of grunting and straining, we managed to clunk the piece onto the wheelbarrow. Just. As it rested there, we noticed Junya making a high-pitched noise, a little like steam whistling from a boiling kettle. We watched with interest as he unexpectedly turned into a snow-white kabuki mask that began omitting a weird guttural yodel. After a few minutes enjoying what we thought was an impromptu cultural performance, we realized his finger was wedged between the enormous concrete slab and the rim of the barrow.
“Could you? Please? Lift a tiny?” he politely gasped.

In the end we had to use a chain block to inch the window above the door, where its weight was so heavy it immediately began bowing the 150-kilogram door lintel downwards. Acting swiftly, James jacked the lintel back up and rushed away to the engineer’s for two steel poles, inserted under the window to take its weight.
Now it’s finally in place, we love our new arched window. However, neither of us is rushing to create a how-to video for YouTube.
We might learn to pole dance instead.