This week, Jim gets caught telling a few porkies.

It was a cunning move, a deft play but it was never going to work. We were driving home and my wife was on the car’s speaker phone.
I suggested the youngest and I could pick up some ice cream on the way home but the idea was nixed. A few minutes later, the youngest said, “Dad, you could’ve just told mum you’d already bought the ice cream.”

“No I couldn’t,” I said, “that would be a lie”.
She went quiet, then suggested this whopper. “What if I’d told you I’d already bought it. That way, I’m lying, not you. You buy the ice cream and we’re all good.” It would have been, admittedly, a genius move. 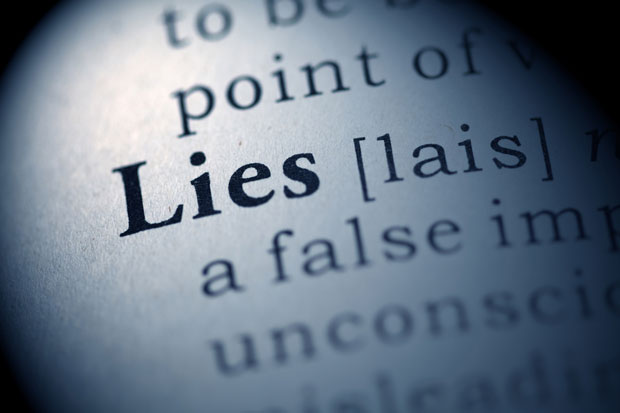 Lies are a hot topic in our household, made more acute I suspect by my career as a journalist. I’ve been lied to by some of the best. By decent, well-respected, usually honest men and women who, at times and for a wide variety of reasons, lie through their teeth. Usually to my face too.
I’ve never known why because the truth always seems to come out. Their lies have only served to erode my your faith in them. It means I begin to suspect everything they say. It’s little wonder experienced journalists are so cynical.

So I’m hard on any hint of lies within our family. I’ve often said to the girls, tell the truth about what you’ve done wrong and we can deal with it. Lie to me…well, then we have problems.
There have been times when I’ve given them another chance.

“Is that truly what you’re going with,” I’d say. “You have one chance, with no recriminations, to change your story. Right now.”
Invariably they do and we move on. But I know they’ll tell all sorts of lies through their teenage years because I did it to Mum. Some will be big, some inconsequential. Some you get away with and others, well…

What every parent fears is the big lie, the one about staying at one friend’s house, when they’re really at another place where there’s a party. Or the one about who was actually responsible for whatever happened. In my case, it was who was behind the wheel.

In my seventh form year a group of us went to a friend’s bach for the weekend. That was fine, all the parents knew and there was no social media to explode the weekend from a group of 10 or so, to the hundreds who descend on parties these days.

Where things went wrong was with Mum’s car. I was sweet on a classmate and I let her drive as a silly way to impress her. She crashed into a concrete pillar in the driveway. No one was hurt, but the front of the car was a mess. I told Mum I had been driving.

For about a week I thought I’d got away with it. Then, one evening, there was a knock on the door and SHE was there. Not for romantic reasons, heck no, she’d come to apologise and to offer money towards the excess on the insurance.

Mum didn’t miss a beat. They spoke, in our kitchen, about what had happened and Mum said not to worry about the money because I was taking care of that. They said good night.
Then Mum turned to me. Oh boy. I know a similar event will come my way because kids believe they can sidestep their way out of trouble. Some don’t grow out of it.

The youngest was keen to pursue the topic that day because I’d led her astray throughout the week. I had said whether she went to the Oceans Surf Life saving nationals to support her clubmates (with her foot still in a cast so she can’t compete) would depend on her behavior. But really, I had already told the school she’d be away for two days to be there in support of her clubmates.

My mistake was telling her I’d done that. It was sloppy of me and led to a long conversation about white lies. We all tell them, especially around birthdays and Christmas. Santa and the Easter Bunnies are the biggest of white lies we all perpetuate. And let’s not forget the tooth fairy.

Once, when the eldest was about four, my wife crept into her room to swap the tooth for cash. It was dark, she whacked her shin against the wooden corner of the bunks and swore.
“I heard that naughty word mummy,” our wide-awake girl declared.

As I giggled in bed in the room next door she had to retreat, return to bed and wait venture back later. Sometimes even the harmless lies hurt.