Blog: No walk in the park


A walk in the forest with the kids proves hard work for Polly.

In an action perhaps not dissimilar to the lugging of coals to Newcastle, we banded together with two other bush-dwelling families the other week and shepherded our gaggle of children off on an overnight tramp into Puketi Forest.
Considering we live flanked by remote DoC reserves and the song of calling kiwis lulls our kids to sleep every night, a forest expedition may seem like over-egging the ‘nature-appreciation’ pudding, but there is something magical about venturing deeply into wilderness areas with a pack on your back. Now that our friends’ eldest children and Vita have all turned five, it seemed like a good time to add tramping to their lexicon. 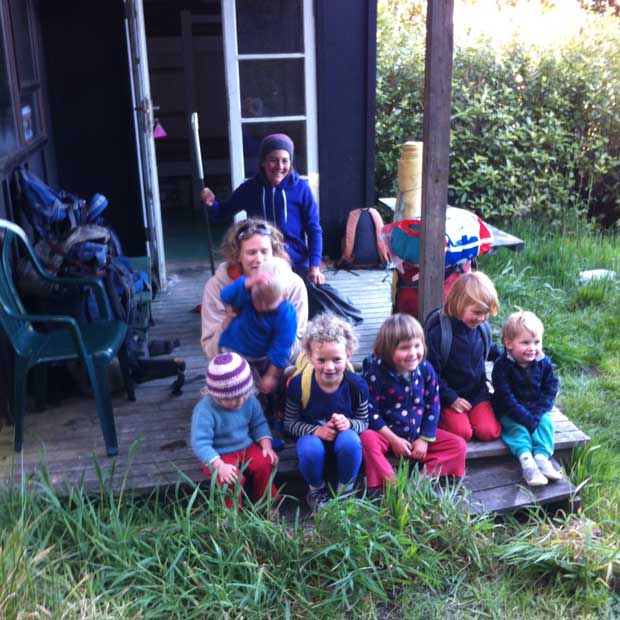 All the kids on the hut porch.

Anybody rattling up SH1 towards Kaitaia will have skirted the edge of Puketi Forest just north of Okaihau. Rising from the valley floor, its steep southern range runs parallel to the road like an immense and continuous barricade of wooded green. Occasional signposts mark gateways into the ancient forest, but those had barely registered for James and me each time we’d hurtled past at 100km/h, with some other destination in mind.
Then our friend Bernard landed a contract as a professional trapper for the Puketi Forest Trust, which is working to restore the area to a ‘living forest’ through pest control and the reintroduction of native birds. As well as his descriptions of towering Kauri and rare Kokako singing at dawn, Bernard told us he had keys to the trappers’ hut.
‘It’ll be a good walk in for the children,’ he said. ‘Around five hours. It’s a bit steep in places so we might have to carry the two-year-olds.’
The three two-year-olds were duly jammed into baby carriers and harnessed to their mothers’ shoulders while their fathers staggered like packhorses beneath gargantuan loads. The five-year-olds, clad in backpacks as light as butterfly wings, scampered off down the trail, shrieking and jostling to be at the front.
Their high-spirited performance was sustained for an admirable six hours of clambering up and down steep spurs, but it was the forest itself that drew the day’s highest praise, with its stands of giant Kauri rising like organic skyscrapers from the leaf-litter below. 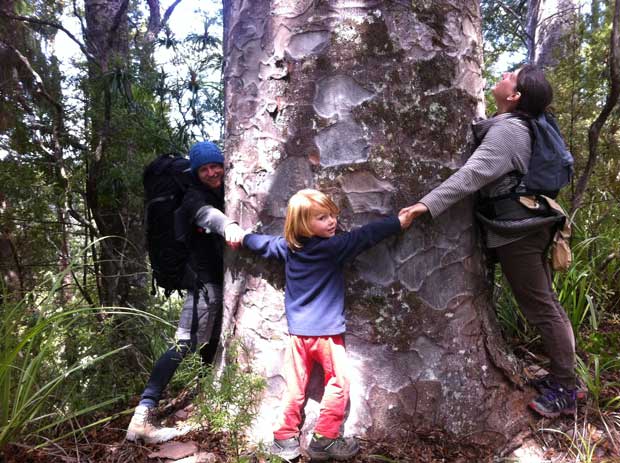 Spanning 15,000 hectares and merging into adjacent Omahuta Forest, Puketi is one of Northland’s largest tracts of native forest and home to more than 370 recorded plant species.
Like crossing different neighbourhoods in a city, we trudged through distinct ecosystems including stands of kauri, podocarp and hardwood trees, as well as bizarre Dr Suess-like forests of ferns and swampy hollows. The frequent stops necessary to accommodate children’s little legs were a pleasure; we stood about marvelling at the girth of ancient Totaras, Rimus, Rata and Puriri while toddling two-year-olds wrestled their way through supplejack vines on the track.
That night, after six over-excited children had finally receded into sleep; we sat on the porch of the hut, wrapped in sleeping bags as the forest exhaled its cold, mossy breath and starlight glinted sharply above, and we congratulated ourselves on the hike.
‘Let’s do another one soon,’ we agreed.
However, Sunday’s dawn chorus rang not with Kokako and Tui but instead with the disheartened whines of children who were tired and tearful as we cajoled them down the ridge on a different route out.
The Kauri forest we passed through was primaeval and breathtakingly beautiful but two-year-old Zen wasn’t in the mood for trees any more. Sick of his place on my shoulders but refusing to walk, he kept any birdlife at bay with his outraged bellows while I marched on with gritted teeth. Zen on the forest floor.

When we finally emerged from the bush after a seven-hour trek, we found ourselves on the banks of a pristine river flowing like liquid glass over its stony bed.
Sinking tiredly onto rocks while the menfolk headed off to retrieve our cars, we mothers sat in silence as the reviving children scuttled off to play by the water.
Nobody mentioned future tramps at the time, but minds are funny things. As the pain and weariness have subsided, memories of forest magic have once again come to the fore and we’re tentatively planning the next overnight excursion. Only Zen needs persuading. Asked for his thoughts on the matter, he emphatically retorts, ‘No! Yucky walk.’
Given that ‘no’ is his go-to word for most things in life at present, I’m sure he’ll come round.
A trip to Puketi Forest is highly recommended to anyone in its vicinity this summer. As well as stunning forest trails, swimming holes and diverse plant life, it is home to Te Tangi o te Tui Puketi, the fourth largest living Kauri tree in the world with a height of 50.9 m. Day walks are accessible from SH10 and SH1. See www.puketi.org.nz or www.doc.govt.nz for more information.