Two years ago, James gave up sugar. It was a desperate move taken by a man at the end of his tether after nothing else proved successful in vanquishing his mysterious headaches and stomach pains.

Initially, he eliminated ALL sugar from his diet – which meant several lean months without fruit and alcohol as well.

We became label nerds in the supermarket, frequently exclaiming incredulously as we discovered the extent to which sugar had infiltrated our diet. 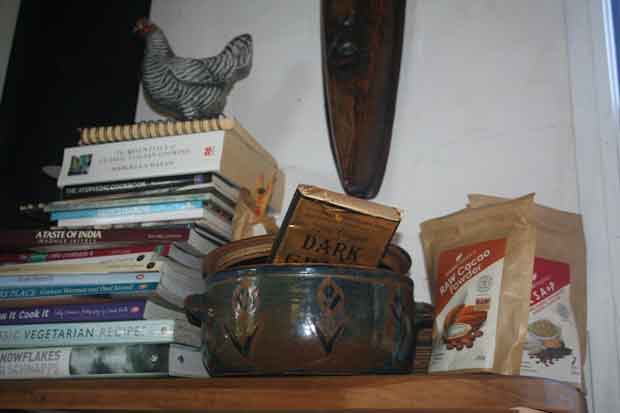 While the children and I didn’t exactly copy his extreme new diet, we tried to be supportive.

Nuts and savoury items became staple snack-foods; I began to use dates instead of sugar in my rare bouts of baking and Vita’s garden ‘café’ issued a special line of sugar-free mud-pies.

While James does now have fruit and alcohol, he’s sold on the sugar-free diet, swearing he’s never felt better, and the whole family’s refined-sugar consumption is low by association.

Guests wanting sugar in their tea or coffee see me rummaging hopefully into the depths of the pantry in search of a long-lost packet, while the empty biscuit tin sits like an ancient artefact in a corner.

However, I have had to draw the line somewhere. There is a secret stash of chocolate in operation, hidden high on a shelf in a lidded pottery pot.

I toyed with the idea of quitting and once even went for some months without replacing the supply before reason prevailed. There is no point depriving oneself of pleasure just to prove that one can.

Because we live in such a remote location, though, we are a perfect site for those who do wish to relinquish an addiction, and over the years, we’ve hosted a few such people. Both wwoofers (willing workers on organic farms) and friends have taken the opportunity to battle
from the grips of the nicotine demon while staying so far from the shops.

Much as James and I like to support efforts to be smoke-free, there have been times when I would have happily shoved a whole packet of cigarettes in the mouth of a guest undergoing withdrawals – to end the jittery, surly, hunched-over aura of hellishness they’ve exuded.

If things get too bleak, we’ve been known to accept bribes for ‘mercy drives’ out to the coast for tobacco supplies, but otherwise, we have initiated sufferers into the chocolate stash whereabouts, put them to work shovelling mud-brick clay and waited for the storms (or their
stay) to pass.