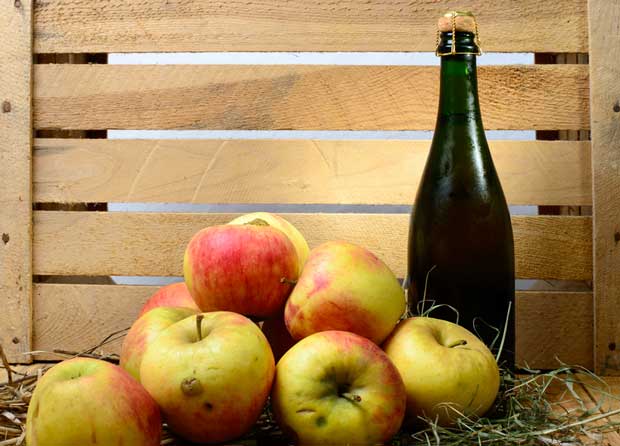 What do you do on a rainy day when you live off -the-grid and can’t watch DVDS? Make cider vinegar!

If ever an isolated shower is forecast for anywhere in Northland, I can pretty much bet my bottom dollar a cloud or two will be emptying over our valley.

It’s dawned on me over the years that our surrounding forest is most definitely of the rainforest variety.

Since moving onto the land, I’ve become something of a weather bore, frantically hushing the children to catch radio weather reports, and mapping the progress of fronts and cyclones with more than a passing interest.

The reason for my attentiveness is our numerous streams. Cascading down wooded hillsides and prettily crisscrossing the valley floor, they add a continual background song to the soundscape of our lives; running the spectrum from gentle tinkling to thunderous torrent depending on the elements. Because we must drive through three waterways to exit our valley, there are days, particularly in winter, when we just can’t get out.

Sometimes we know in advance that an enforced home day (or week) is coming. Other times we awaken to the roar of an unexpected deluge drumming the roof and must spontaneously abandon wherever the day’s excursion was going to take us. If we’re already out when the
streams burst their banks, my mother, who lives on the coast, always offers a gracious reception.

For now, Vita and Zen, who seize each moment as the next adventure, take news of abruptly changed plans with good humour. If we’re trapped at home, they know the pantry’s always well-stocked and floodwaters will never reach us.

As for their parents – we can usually get through a day or two of indoor confinement without going crazy, but our three-roomed house shrinks dramatically during the aeon and cabin-fever looms large by day three.

Vita and Zen like the rain; stripping off to whoop nakedly through the sodden mud at every opportunity but twinges of conscience mean I summon them in after an hour or so – it is winter after all. If we lived on-grid, this would be the time to park them both in front of a DVD but with no sun, the solar panel can’t charge, and the laptop’s usually run out of battery power, so we must turn to other forms of entertainment.

Such was the scenario the other weekend. We’d been invited to a Matariki midwinter feast, but the raging brown river rumbling over our ford meant both the road and the plan were off-limits.

After a moment spent mourning the Perigord black truffles we’d been promised as part of the menu, James and I pondered how to pass the day.

On softly sunny days back in autumn, we’d picked two large crates worth of apples from a neighbour’s orchard and pushed the whole lot through the juicer. While apple juice will naturally turn to vinegar given long enough, we helped ours along by tipping in ‘the mother’ – a little of last year’s cider vinegar to hurry the process. We’d then placed the juice in jars, covered it with muslin and left it to ferment for a couple of months.

More stories you might like:
Lynda Hallinan's Blog: How to sprout a kūmara in no time at all

As the rain beat against the windows, we formed a chain gang of sorts, straining the juice to remove the gelatinous ‘mother’ growing on the top of each jar, bottling the results and giving the floor an unexpected vinegar scrub, thanks to sploshing little helpers. We now have our new year’s supply of cider vinegar, which we use for everything from hair conditioner, to a health tonic, to salad dressing, to a mould deterrent on our canvas tent.

Here’s my recipe for a cider vinegar salad dressing. Do you have any uses for cider vinegar to recommend? Or strategies for maintaining sanity during prolonged wet-weather confinement? 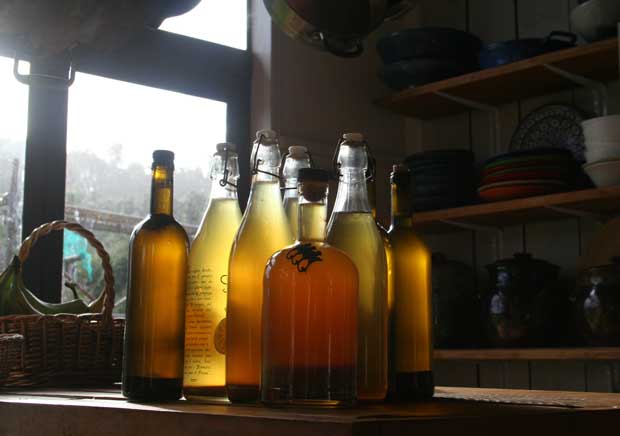 A tablespoon or two of Dijon mustard (depending on your preference for tang),
A generous dollop of cider vinegar,
¼ cup of olive oil,
Juice from a lemon,
And a good splash of balsamic vinegar.

Shake it thoroughly and drench your salad. It works very well with a cooked rice salad, especially if grated carrot, beetroot and finely chopped red onion feature among the other ingredients.