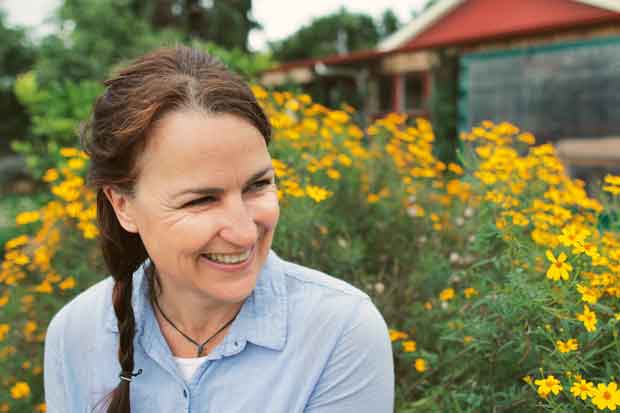 A new book from a permaculture expert helps beginners conquer their fear of fruit tree  pruning.

There are three kinds of pruners in Kath Irvine’s experience. Those who want to chop off 90 per cent of the tree, those who don’t chop off enough, and the biggest group, who are too worried about ruining a tree to chop at all. All share the same problem, says the Levin-based permaculture landscaper who has run pruning and gardening workshops for almost 20 years.

“The disconnect is simply an understanding of trees. Without that, how do you know how to approach it? I can cut a tree and have an idea of how it’s going to respond to my cut. “But if you don’t have that (understanding) you would panic. “That was a goal with this book, to bring people to an understanding of trees and how trees work.” You can choose from a large range of pruning books, creating another problem says Kath.

They can be so full of complex pruning techniques that it’s overwhelming. Her book is designed to keep it simple. It looks at just two common shapes – single leader and vase – and gives you the basics.

“I decided the book would be absolutely fresh and basic, right at the beginning, so I’ve just described those two shapes. If you can do the basics really well you can spring from there to other styles and you open up to reading other pruning books that go into the more tricky stuff.”

When it comes to tree pruning, Kath’s first step is always backwards. Have a look at the structure of the tree. The first thing Kath sees is what’s not there.

“The immediate thing to me is the absence of light. I really want a compact tree and I would say most people are the same. “It’s about having as much productive wood as possible and that’s all about getting the light in there. The first thing I see is the structure, the framework, and then where does the light need to come in.” The great thing about pruning is even when you get it wrong, the tree will forgive you. Eventually.

“Ruining a tree is everyone’s fear, but of course it grows again. You could chop the whole thing off with a chainsaw and you would still be able to – in a few years – get fruit off it. “It’s a big thing, cutting a tree, and it’s what I love about doing workshops – I make people cut. They’re generally really timid but once you get them cutting, they just need encouragement.

“So I wrote the book to be really encouraging. I want people to be successful. I hate the thought that they’ll have a go and it won’t work and they’ll just give up.