New Zealand towns and cities are crying out for more town criers. Two sisters are ringing the bell for a proud (and loud) institution.

Oyez! (pronounced Oyay) Oyez! Oyez! The Honourable Guild of New Zealand Town Criers seeks candidates to be goodwill ambassadors for their region. City. Town. District. Valley. Must have a winning personality, brawny vocal chords and the willingness to publicise their locale by drawing attention to themselves. 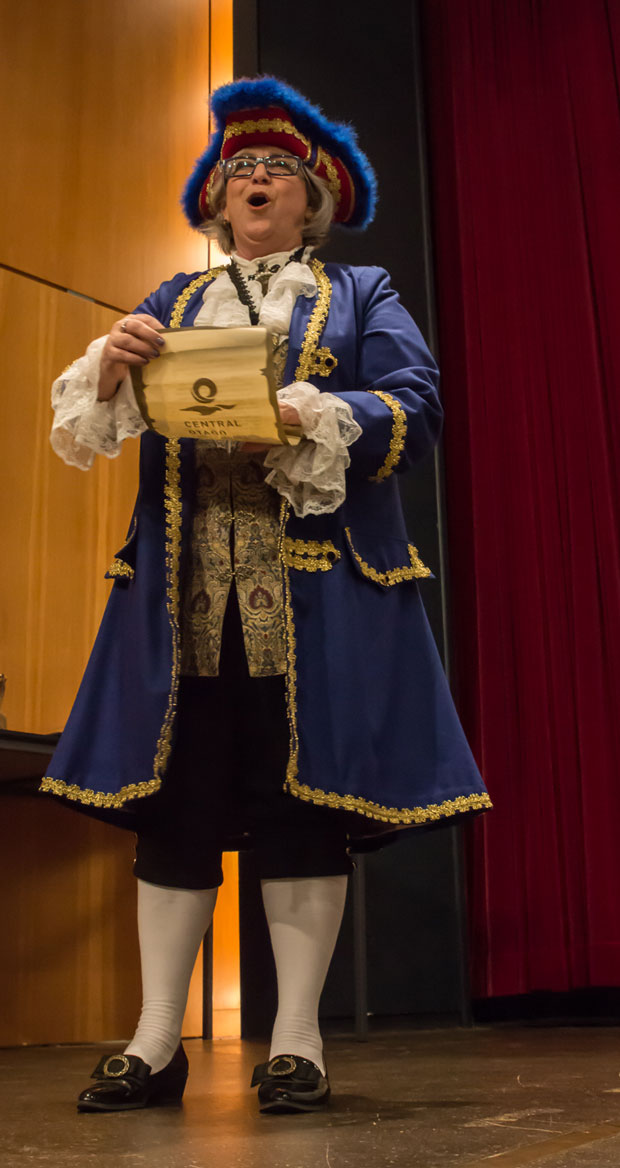 Town criers, tasked with gathering the citizenry and making announcements, have been around since the time of the ancient Greeks. And they’re still around in nearly every country of the world despite widespread literacy and cheap newspapers even if the role today is ceremonial.

Town criers are affiliated to the Ancient and Honourable Guild of Town Criers and tend to be of a certain age with a background in community performing arts and music. Many are professionals, with doctors and teachers common, gregarious, articulate, flamboyant, energetic and dedicated to promoting their town, district, region and/or country.

The Cry is at the centre of any Town Crier’s presentation. It must be concise, clearly enunciated, delivered in a tone appropriate to the audience and with a certain finesse.

“The town crier,” says Caroline, “is not the town clown.” Ono!

A town crier’s elaborate clothing is referred to as a uniform, livery or regalia. It is not a costume. “We are Town Criers; we’re not playing the role of Town Criers,” says Caroline. Oyez!

For 17 years Caroline has been engaged by the Palmerston North City Council to add pomp and ceremony to the parades of graduands from Massey University and other tertiary institutes in the city. She correctly pronounces and proudly announces the names of new citizens at the local citizenship ceremonies and undertakes other civic duties as well as private engagements such as being the MC at conferences. She has won several awards at international and national Town Crying Tournaments. Her slogan, designed to appeal to conference organisers and the like, is Your Voice of Choice.

On the other hand, Paddy Ann’s slogan, The Gal with the Bell and the Very loud Yell reflects her less formal approach. Recently she delivered a colourful welcome, half in English the other half in Google-Spanish to a group of Argentinian farmers in the Millers Flat hall.
After winning three consecutive Media Awards as well as best Dressed Crier at international tournaments, Paddy-Ann was encouraged to host the World Tournament in 2015 and was commended by her mayor for the publicity it had generated overseas in addition to the tourist dollars it generated for the region.

“But with New Zealand Guild numbers having dwindled to five, there are opportunities for local councils with a bit of chutzpah to engage a Town Crier and boost their profile”, says Caroline.

“We need a crier in Nelson to make the most of the town’s fabulous markets. The fellow in Rotorua has just retired and needs to be replaced. Tauranga and Wellington should have one. There’s one in Howick but Auckland could do with another three or four.”

Paddy Ann points out that while some town criers are paid by their Council for a continuing commitment to specific events, “town criers in general are seen as goodwill ambassadors, volunteering their time when asked by community and charitable organisations, although a fee would probably be expected from larger businesses and corporates.”
“It’s fun for us going to so many events and meeting different people,” Paddy Ann says. “But quite often that’s not the point. Everyone wants to have their photo taken with the Town Crier and you often don’t appreciate how much pleasure you bring to people.” 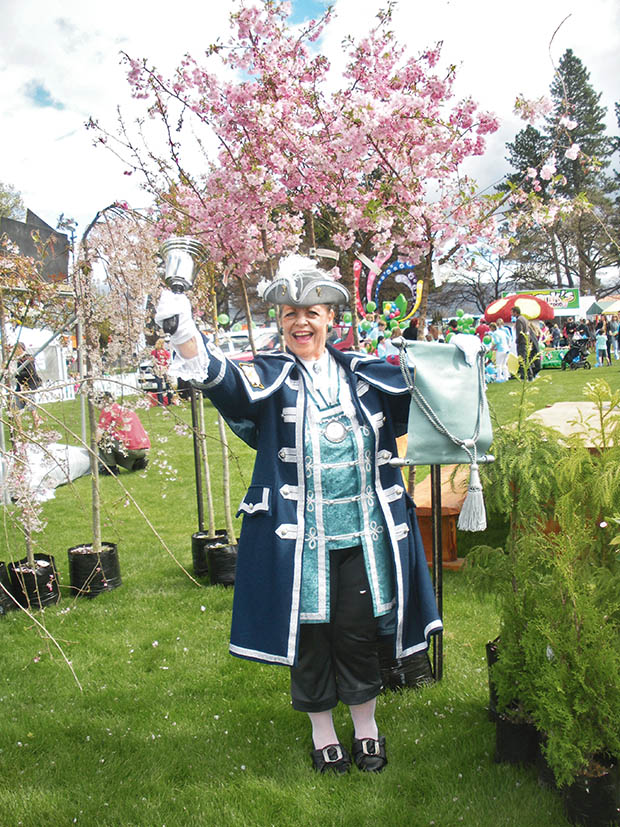 Why did you become a town crier?

Caroline: Massey University and the Palmerston North City Council decided to add a certain pomp and ceremony to the graduation ceremonies for the year 2000 and the idea of having a Town Crier appealed to both parties.
I’d done several amateur dramatic productions in Palmerston North, and I was offered the role for a week – the task – to deliver a congratulatory cry through the CBD then lead the Graduation Parades. It was very successful and my role was formalised by the Mayor. I’ve been doing it and expanding the role ever since.
Paddy Ann: When I went as Caroline’s escort, dressed as an 18th century lady, to a tournament in Anacortes (Seattle Washington, USA) in 2001 there was an article about me in the local Gore paper. The Irish fellow who was the Gore Town Crier, Michael Roach, approached me saying he wanted to relinquish the role and thought I’d make a wonderful Town Crier – would I like to do it? Michael rang me again shortly afterwards at four o’clock one afternoon to say he had tendered his resignation as Gore Town Crier and put me forward as his replacement. Later that day he died suddenly of a heart attack. The local Council respected his wishes and I was inducted as Town Crier.
What’s the driving force for you in town crying?
Caroline: I get a lot of personal satisfaction from it and the further I get into it the more I enjoy it and it’s of value to Palmerston North.
Paddy Ann: Everything about Town Crying is positive and I like the pomp, ceremony. And there’s the camaraderie of meeting Criers here and overseas. They’re colourful, talented and fun and some have become close friends. My husband Rod and I have travelled Canada and Africa with two couples we met through town crying, one from England the other from Canada. One couple has come to New Zealand and the other is coming next year.

More stories you might like:
How to save money (and the planet) with your hot water and heating

How do you become a town crier?
Caroline: Contact the president of the New Zealand Guild of Town Criers – that’s me. I can tell if a person is right by the way they answer a few questions – why they want to do it and what they think they can do for their city or district. We advise them about the livery – what they should be wearing. They need a letter from their mayor, or from a business association in a smaller area, endorsing them as a representative of the local community. They then become a postulant for a year after which time their community contacts the guild to confirm their suitability or otherwise. Then they receive their guild badge and are fully fledged guild members.

Is there any sibling rivalry between you?

Paddy Ann: The town crying has brought us together. When we compete against each other we’re both really happy for each other – there have been no black eyes, anyway.
Caroline: When we’re writing our cries for tournaments and competitions we run them past each other except when we’re competing.

What do you do when you’re not a town crier?

Paddy Ann: I took early retirement from primary school teaching eight years ago when we moved from the dairy farm in Southland to the Teviot Valley near Roxburgh. My husband Rod is a semi-retired farmer and we’re both involved in the local community. We have four adult children and five grandchildren.
Caroline: I am the Gateway co-ordinator and careers administrator, working with senior students at St Peter’s College in Palmerston North. The Gateway program allows students to have work experience while gaining NCEA credits.

An assembly of town criers.

What’s the most interesting, bizarre or funny gig you’ve had as a Town Crier?
Caroline: Being invited to Japan by Mr Ohashi of the International Pacific College, as it was then, in Palmerston North where I officiate at the commencement and graduation ceremonies. He wanted me to perform at the opening ceremony of his new academy in Japan.
Paddy Ann: The family of another Town Crier, Noeline Dudley-Garbutt asked me to speak at her funeral and lead her casket from the church. That was the most unusual. I walked in front of the hearse along Buckingham Street in Arrowtown in full regalia, ringing the bell that had been shrouded in black velvet

How is competition town crying judged?
Paddy Ann: There are usually five categories: Sustained Volume and Clarity, Composition of the Cry, Content of the Cry, Dignity and Bearing and Livery. Some tournaments also include a media prize where the criers keep a record of all the media coverage they have generated for the host country as well as their own region.

Why do you think town criers are necessary? What’s the value of being a town crier?
Paddy Ann: They’re the best free advertising and goodwill ambassador an area could have.
Caroline: It’s the WOW factor – a visual presence commanding attention. And there’s always a photo often ending up on social media pages promoting where it was taken. Even if we’re just directing foot traffic, when we’re dressed in full regalia and we ring that bell and project our voices, people take note!