What is a dark-sky nation? Nelson author Naomi Arnold wants New Zealand to be the world’s first 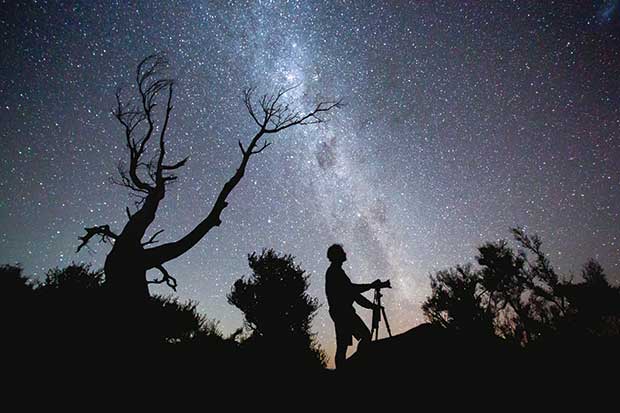 Two and a half years spent researching and writing a book about the southern skies convinced science writer Naomi Arnold of the importance of protecting the darkness of our nights.

“More than half of the New Zealand landmass has a pristine dark sky, but few New Zealanders live under it,” says science writer Naomi Arnold, who has just published Southern Nights: The Story of New Zealand’s Night Sky from the Southern Lights to the Milky Way.

The Nelson-based award-winning freelance journalist, author and podcaster first felt awe for the night sky as a pyjama-clad four-year-old in the Western Bay of Plenty after being shown Halley’s Comet by her dad. Today she fears New Zealanders don’t appreciate its value.

Neither, she says, do most Americans. In 1994, after an earthquake brought down the Los Angeles power supply, emergency centres reported a flurry of anxious residents calling in about a strange, giant, silvery cloud in the sky. It was the Milky Way. 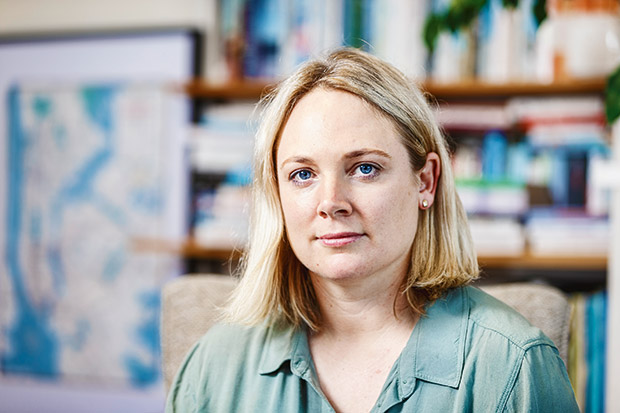 Writer Naomi Arnold would like New Zealanders to campaign to become the world’s first dark-sky nation.

Naomi doesn’t want this to become the experience in Aotearoa. She applauds the lighting regulations protecting one of the world’s largest and darkest Dark Sky Reserves, at Mount John above the township of Tekapo in the Mackenzie Country.

From the local district plan: “All unnecessary light pollution of the night time sky in the Mackenzie Basin area is to be avoided so as not to adversely affect the astronomical, astrophysical and atmospheric research at the Mount John University of Canterbury Observatory or people’s ability to view the night sky.” 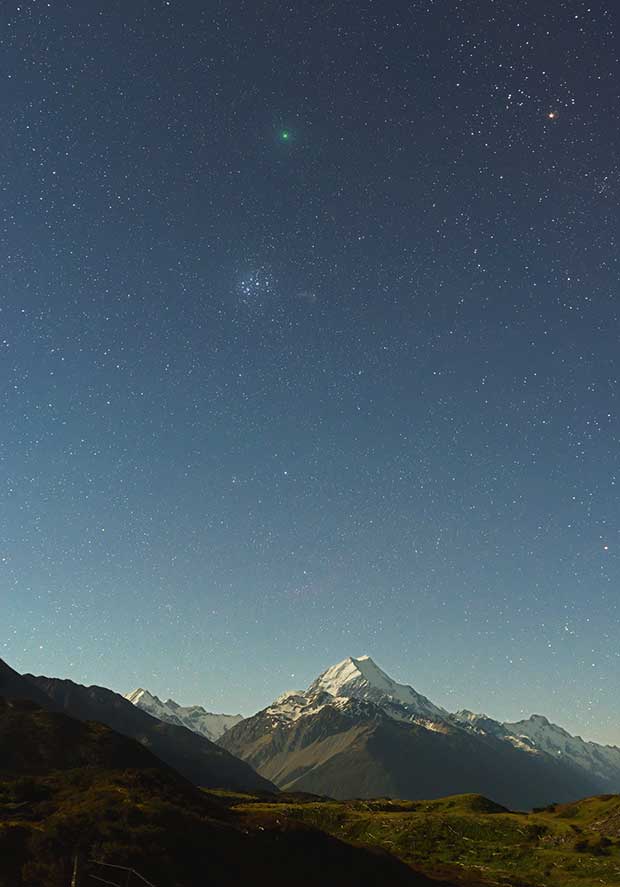 The green ball of comet 46p/Wirtanen above Aoraki Mount Cook. Below it is the constellation Pleiades or Matariki. Photo by Stephen Voss.

This is achieved by detailed rules about shielding (stopping the light from traveling upwards), filtering (to remove the blue or ultra-violet light) and timing (prohibiting all outdoor lighting between 11pm and sunrise).

More stories you might like:
The nomadic couple behind Expedition Earth returns to nest in a two-pod tiny house in the Far North

Naomi says taking such an approach across the whole country would not only enhance opportunities for celestial observation but improve human health.

“For humans, light is a biological trigger and exposure to artificial light at night can harm health. Too much light in the night time environment (especially inside the home) suppresses natural melatonin production and increases the risk of obesity, depression, sleep disorders, diabetes and some types of cancer. For instance, there is strong epidemiological evidence for a link between indoor artificial light and prostate and breast cancer.” 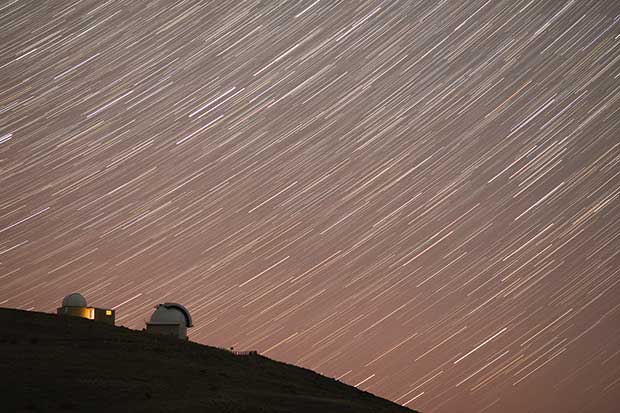 She says that while it is hasn’t been proven that the light causes cancer, laboratory studies show exposure to light at night can disrupt circadian and neuroendocrine physiology, accelerating tumour growth.

“Melatonin is essential for health, ensuring the normal function of our immune and hormonal systems. As a species, we humans evolved with long periods of darkness lit only by the dim light of a fire. In winter, humans would sleep from the onset of darkness but perhaps wake in the middle of the night for a few hours of gentle activity, before drifting back into another long period of sleep.” 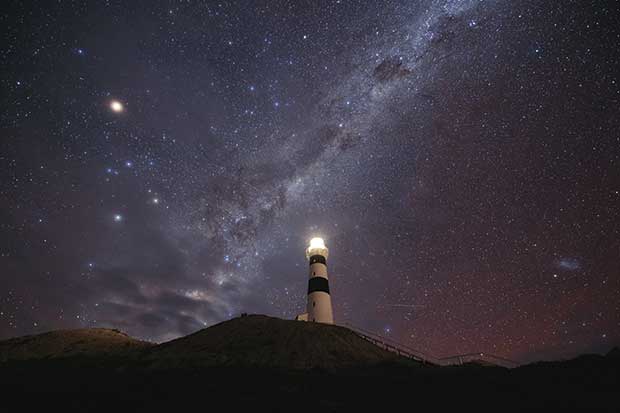 Scudding cloud passes over the Milky Way at Cape Campbell, on the northern tip of the South Island. Mars is the brightest red ball, with the claw of Scorpius below. Saturn is the bright white fuzzy spot to the lower left. Photo by Tamzin Henderson.

Naomi wants New Zealanders to campaign for a dark sky by encouraging their local councils to adopt appropriate lighting regulations for public areas. She urges people to take a look at their own homes, turning off unnecessary lights, keeping lighting in the warm/sodium zones (rather than blue/LED) zones and going to sleep in total darkness. 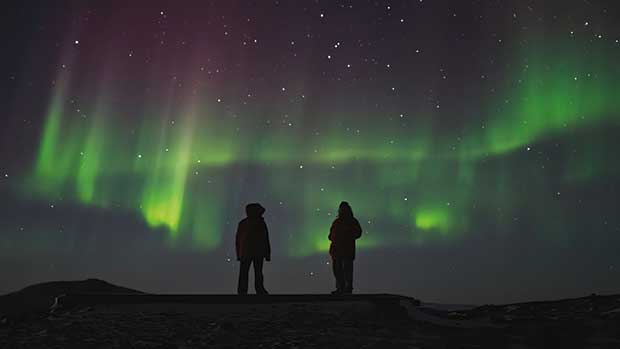 Rugged up against the cold, two Scott Base staff members stand outside to watch an aurora during the Antarctic winter. Photo by Anthony Powell.

She also advocates that New Zealanders should get outside under the night sky. “It’s calming to look at the stars for a few minutes, hearing and feeling only your heartbeat and breathing. Our bodies evolved with regular patterns of sunlight and darkness and to subsume yourself back into the night is a kind of meditation in itself.

“What connection to a greater, wilder, yet entirely orderly power is lost when the stars blink out and our attention is directed instead only downward, at ourselves?

“If we accept that we and everything on Earth are made of stardust, then by ignoring the sky we’ve lost our ancestry, a tangible connection to our origins and a powerful sense of kinship with every other living and inanimate object on our planet.”

Southern Nights: The Story of New Zealand’s Night Sky from the Southern Lights to the Milky Way by Naomi Arnold explores what is special about Aotearoa’s skies and stars. 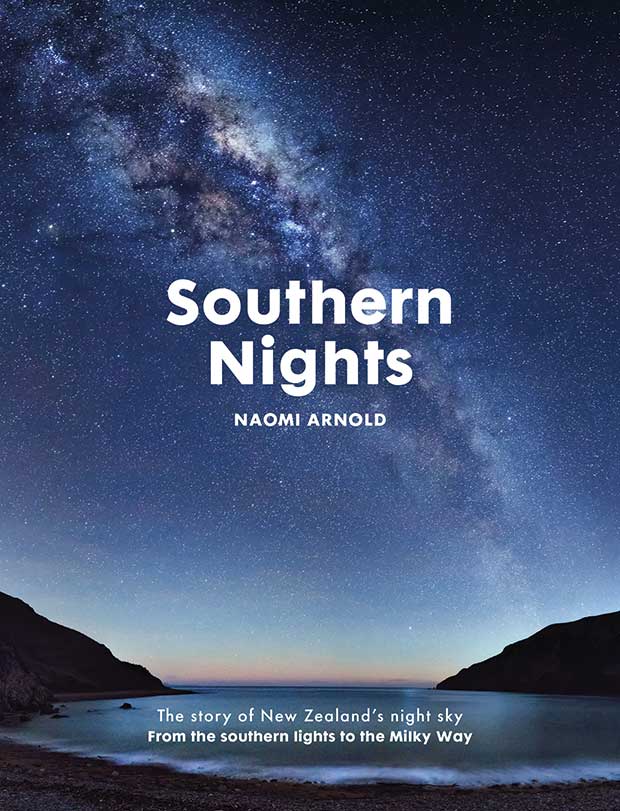