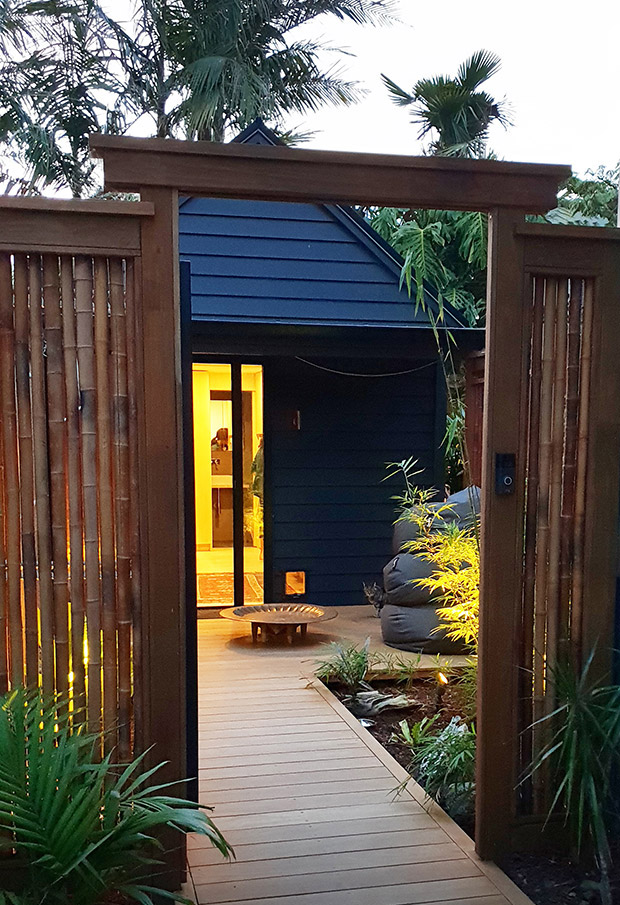 A desire to see the world encouraged an Auckland couple to reimagine their living requirements and move into their reworked garage.

This miniature house may be small, but what it lacks in floor space it gives back in spades — by way of a great big chunk of lifestyle. For this family of three, from the city-fringe suburb of Ponsonby in Auckland, that meant being able to follow their dream of taking a year out to live in Spain.

Stephan Peters and Maureen Tan had occupied their 1920s bungalow since the mid-1990s. “We’d renovated this and that over the years but the garage at the back of the home was always under-utilised,” says Stephan. In 2018, following changes to regulations under Auckland’s Unitary Plan, they decided to convert the garage to a self-contained dwelling. Maureen, a freelance graphic designer, and Stephan, an IT project manager, wanted the resulting home to be unobtrusive within their established tropical garden.

“We tried to keep as many plants as possible, which meant careful digging, placement and head-scratching to get all the utilities in.” 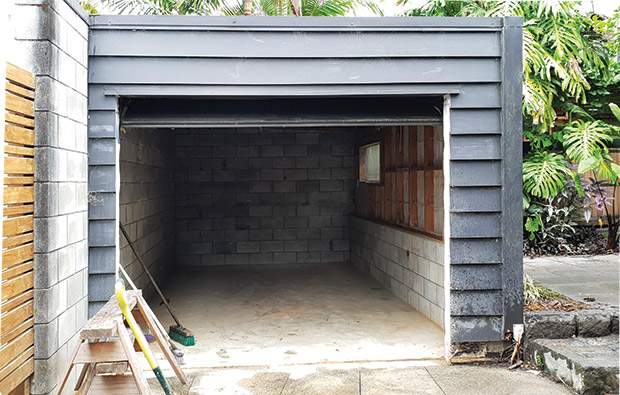 The garage before the renovation.

The couple share the same sensibilities and decided upon a hint of Balinese style, so it teamed with the immediate landscape. “The layout more or less designed itself as there are only so many ways you can logically configure a 15-square-metre floor plan and make it work,” says Stephan.

For peace of mind, they called on Macfie Architecture who suggested creating a dormer for the main loft which added more space to the pitch roof allowance.

More stories you might like:
Inside the expensive world of houseplants: The reality of making a living from cuttings + how to create a thriving indoor garden But it was Maureen, who once worked as an interior designer, who came up with the innovative solution of a net to link the two mezzanine bedrooms that provide a separate sleep space for them and their 10-year-old daughter Amaya.

The idea was simple, the execution not so. “Finding a suitable net proved difficult so, in the end, we used a catamaran trampoline.” 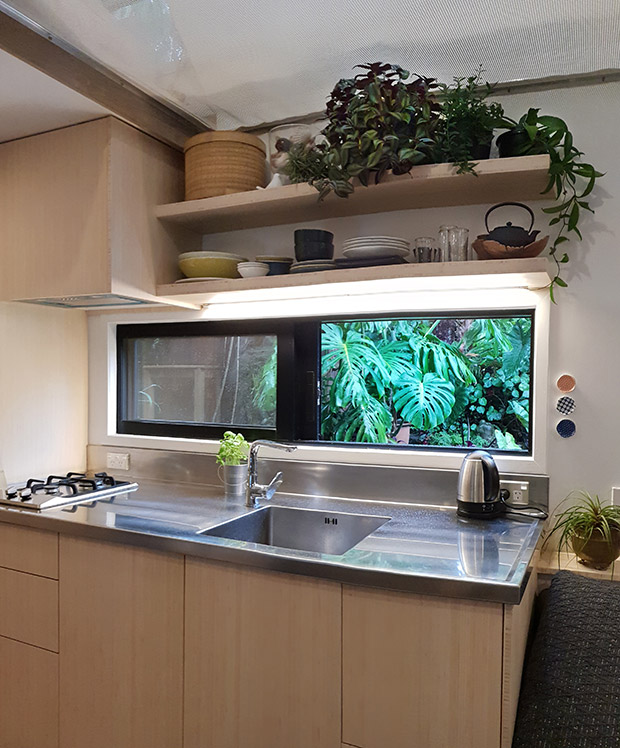 It became one of the family’s favourite features because it was so multifunctional. “It acts as a safety barrier, gives access from one bedroom to the other, is a lounging area for Amaya and her friends and works aesthetically.”

While Stephan was able to do most of the hands-on construction and landscaping himself, they also engaged a licensed practitioner, Andy Rust from Custom Rust. Andy helped with the structural build, provided expert guidance and made sure everything was to code, and recommend good subbies. 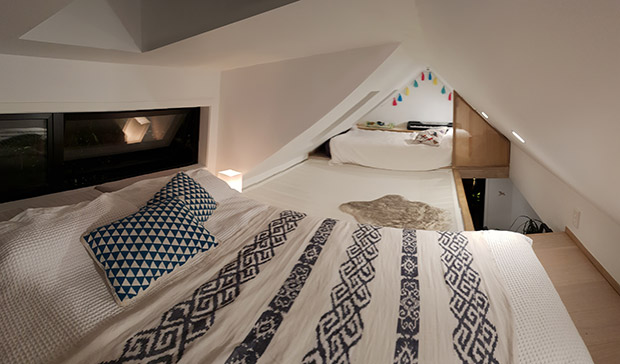 The result is both practical and magical – a boutique home with a Balinese feel tucked into a mature garden. Outside, fencing made of Brustics bamboo panels, a timber gateway and wooden boardwalk, set the scene.

They lead to a decked garden which adds 10 square metres of living and is planted with Himalayan blue bamboo and furnished with beanbags. A cedar-tub spa, shared with the main dwelling, brings even more of the tropical-holiday feeling to their backyard.

Garden lights illuminate the tree fern canopy above the spa, and the resident hedgehog can be heard scavenging in the shrubs. 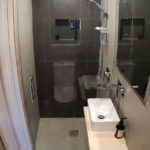 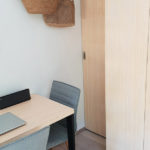 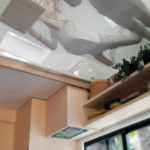 Inside, the bamboo theme continues, and the cabinetry of the kitchen, the end wall and two sliding doors on either side of the pantry (one leading to the bathroom, the other to the laundry, closet and storage) are made of bamboo panels from Plantation Bamboo. To achieve a light, bright feel to the interiors, Woca oil in ‘White’ protects the bamboo.

More stories you might like:
Water cooler: Dunkirk review, garden goals and why it's good to be a bag lady

Furnishing the home was a breeze as living with less became the mantra. Yet they still wanted it to feel homely. Inherited pieces such as the antique rug and kava bowl work well alongside contemporary finds, and there are many indoor plants. 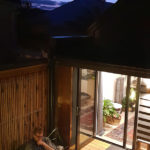 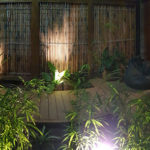 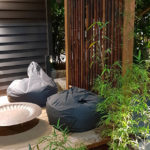 “They take up space, but we would rather have more plants than things,” says Maureen.

All up, the project took six months to complete, but it allowed the sports-loving family, who spend many hours in the great outdoors, a space to move into and then a chance to expand their horizons. They lived in the home for a few months before heading off to Europe for year’s sabbatical in Malaga. By renting out the main house and its tiny offsider, they have a financial backstop while they explore the world – and can always return to their mini-home at the drop of a hat. 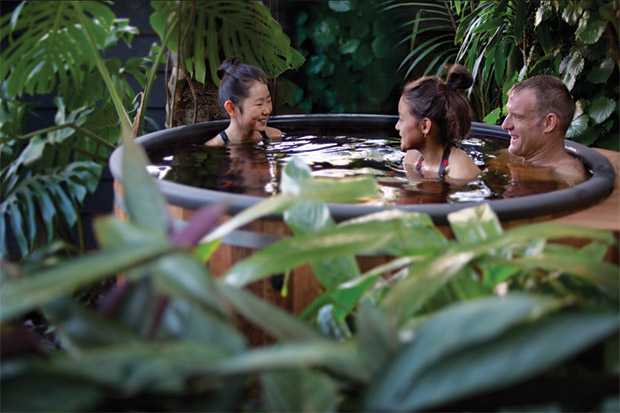 Life is a journey, and this has been a good one. As Maureen says, “Downsizing has enabled us to simplify life so we can spend more time doing the things that bring us joy.”