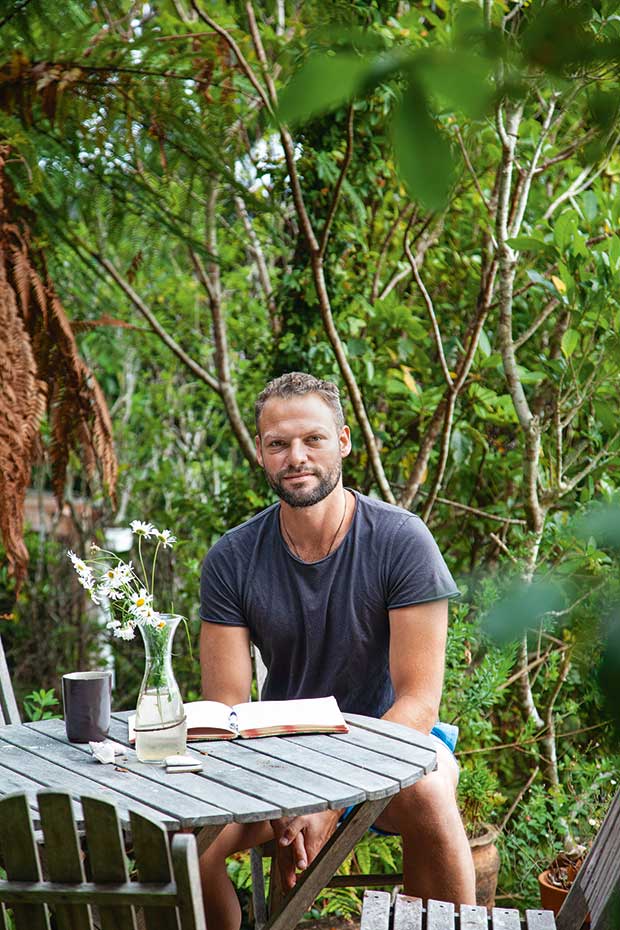 Avi starts his day by writing in his journal on the outside table looking out over the Auckland skyline.

New Zealand’s first Survivor winner is back-to-basics again in an Auckland tiny house, using lessons learned during his time in Nicaragua and Ghana.

Avi Duckor-Jones, winner of season one of Survivor New Zealand, triumphed by being kind. This niceness wasn’t a strategy to win the votes of his fellow contestants, it’s the way he lives his life: be kind to the planet and to fellow humans.

The Avondale College teacher’s tiny house, which he rents from friends on the edge of a native forest on the fringe of Auckland, is not a flashy home bearing signs of his Survivor winnings. Avi spent a good portion of his $100,000 prize producing a documentary series, Avi’s Return to Ghana, which follows the lives of students he taught while living in West Africa in 2014. His tiny house in the Henderson Valley, with its loft bed, small shower, composting loo and teeny-weeny kitchen, is basic but beautiful. “I saw this place and the view and thought, ‘This is all I need in the world.’”

The 12 x 3m house is “abundant” compared with the small corrugated-iron shack he called home while teaching in Africa.

“Ghana taught me that you don’t need much stuff to live. We had composting toilets and a bucket for a shower. Making coffee in the morning was difficult because you had to get water from a well and then make a little fire to boil the water. It makes you appreciate the simple things and how much wastage there can be in everyday life.”

In his tiny house, Avi has enough room to practice yoga in the living area. He finished writing his award-winning novella Swim while watching the sunset from the kitchen window.

“Living so close to nature, and the quiet and simplicity of this house, definitely helped me finish the book. What I like about this place is that no part is extraneous or unnecessary. I engage with every aspect of it.” 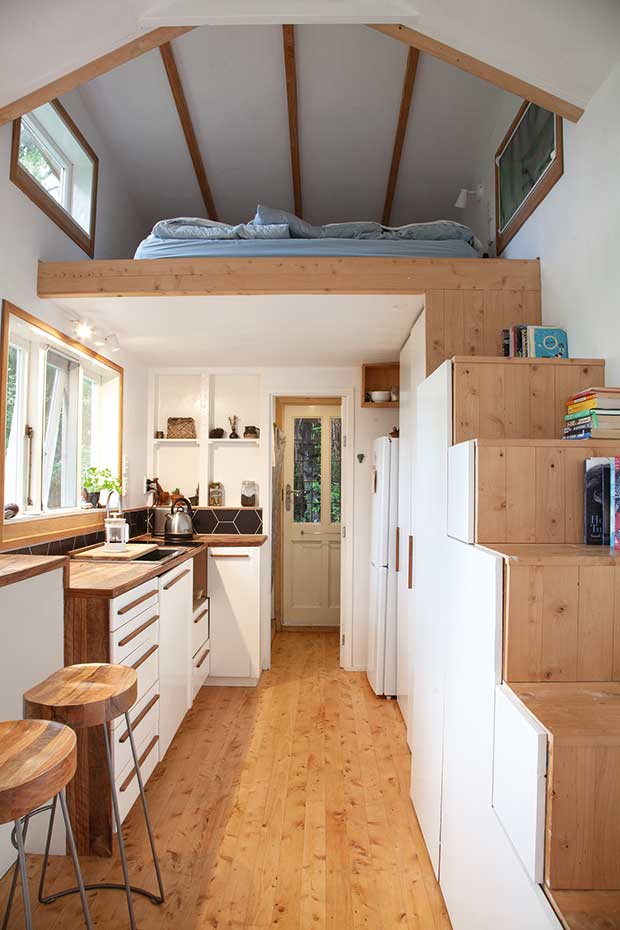 The stairs have hidden storage and also double as a bookcase.

The simple surroundings and pared-back existence could only have helped reduce this novel — about an open-water distance swimmer — from its original 150,000 to 40,000 words of raw storytelling.

Season one Survivor New Zealand contestants were allowed to take one luxury item on their isolation test. While others took playing cards and towels, Avi took a journal and pen.

“It was controversial whether that was two items but I’ve lived out of a backpack for many years, so for me sleeping in the sand and making a fire wasn’t a big deal.”

After studying law at the University of Otago, he moved to Hawai’i for a few years to surf and study indigenous Hawai’ian rights, which dovetailed into traveling around Central America, a job with National Geographic Student Expeditions and later at US eco-focussed programme Carpe Diem Education teaching university students about sustainability and conservation. The Swim author’s literary collection is one of his few indulgences.

Avi credits his upbringing for an open mind.

“My parents gave me a strange sort of template for life. They are both really hardworking, but probably couldn’t survive in a 9-to-5, Monday-Friday job and I’ve always had a little battle with that too.” His mother JoEllen Duckor is one of the few privately ordained rabbis in New Zealand and his father is the writer Lloyd Jones (Mister Pip), so perhaps Avi was always going to have a life less ordinary.

In his tiny house Avi recycles, composts and has a small garden on the steep hill nearby. His next goal is to become more aware of his car use and to buy a bicycle. Outside, yellow ropes mark the rāhui protecting the forest from kauri dieback and one grand old kauri towers behind the house. On stormy nights the nearby kauri, tōtara and mānuka drop a volley of sticks on the roof — deafening when lying in the sleeping area where the bed is centimetres from the ceiling.

“It’s noisy during a storm, and the whole house shakes. But even when it’s loud, I’m grateful to be this close to nature.”

THE WORLD ON HIS SHOULDERS

Avi takes living lightly quite literally. His advice to anyone wanting to downsize? “

Go on a multi-day hike. A quick way to figure out what you actually need is to carry it. The lighter the load, the easier it is.”

This is an extract from our new special edition In Your Backyard: Living Lightly

More stories you might like:
The spirit of Logan Lore: The Wānaka couple finding resilience, mental strength and purpose through outdoor adventures
Discuss This Article