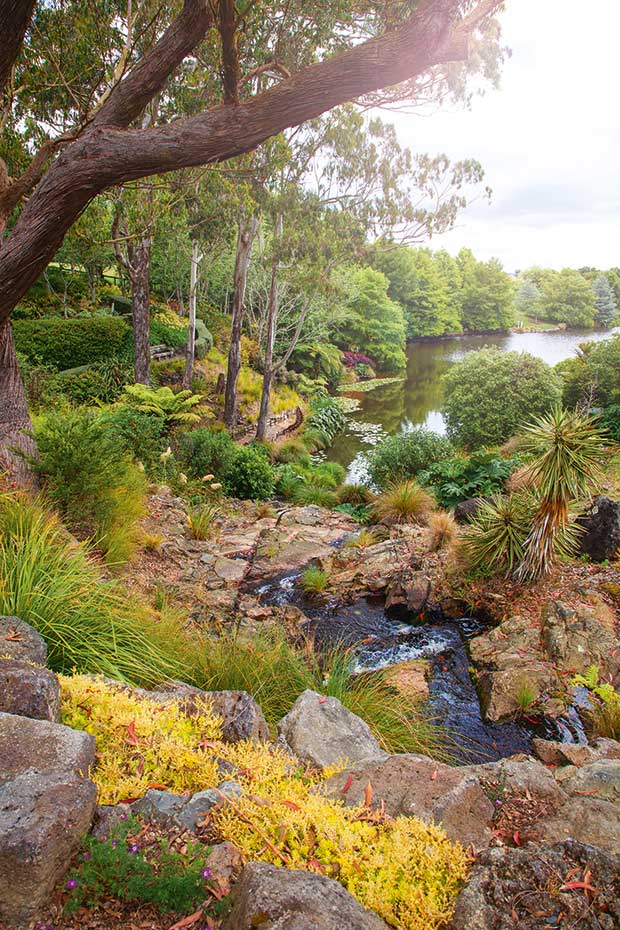 Over three decades of patient-yet-determined graft, the Walkers of Clevedon have crafted a rural enclave around a thoroughbred stables that they hope will stay the distance way past the winning post.

No childhood chore made Sherin Walker scarper faster than weeding. “My brother and I would run and hide behind the water tanks when Mum called us to help; she never had any idea we could actually hear her.”

Growing up on a farm in Waiuku, vivid experiences like “pulling turnips and chasing cows through the mud” turned her off being a farmer’s wife. She was just as unenamoured by gardening. Sherin became a school teacher and stuck to her guns in the suburbs. So when, years later, her husband Peter mentioned that a move to the Clevedon countryside would be the bucolic antidote to the stress of owning Halls, a business running 120 refrigerated trucks the length of New Zealand, she formulated a plan.

The couple had met and married in the early 1970s — and the only common ground that embraced vast expanses of green until now was a shared love of golf. “I knew there was plenty of clay in Clevedon and that when it rained, it became boggy and looked bloody awful,” she says.

One weekend in a downpour, Sherin arranged an impromptu land viewing. “The first place we went to the driveway was under water,” she recalls. So far, so good. The second property wasn’t faring much better in the deluge. The estate agent in her red stilettos couldn’t walk more than a few steps before the ground swallowed them up. 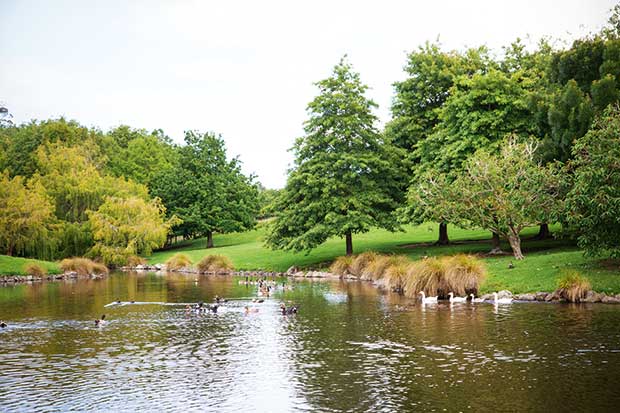 Geese swim on the Pond O Shags, so named because there once was a big straggly pine on its shores filled with the nesting birds. Most of the 80 geese and ducks that call Ashford Lodge home come via the SPCA — many are blind or crippled.

But Peter disappeared into the gloom. “When he came back and said ‘I’m buying this’, I cried all the way home.”

Those first 24 hectares — land that was part of the original farm that ran through the Clevedon Valley — were purchased in 1984. On it was a humble Keith Hay home and a stable block.

Peter’s interest in horse racing was nurtured by his grandparents at an early age, much to the chagrin of his school principal who complained it was not entirely proper. “It was one of the only ways to have a day out in those times. I was eight or nine, and we would get all dressed up for the races,” he says. 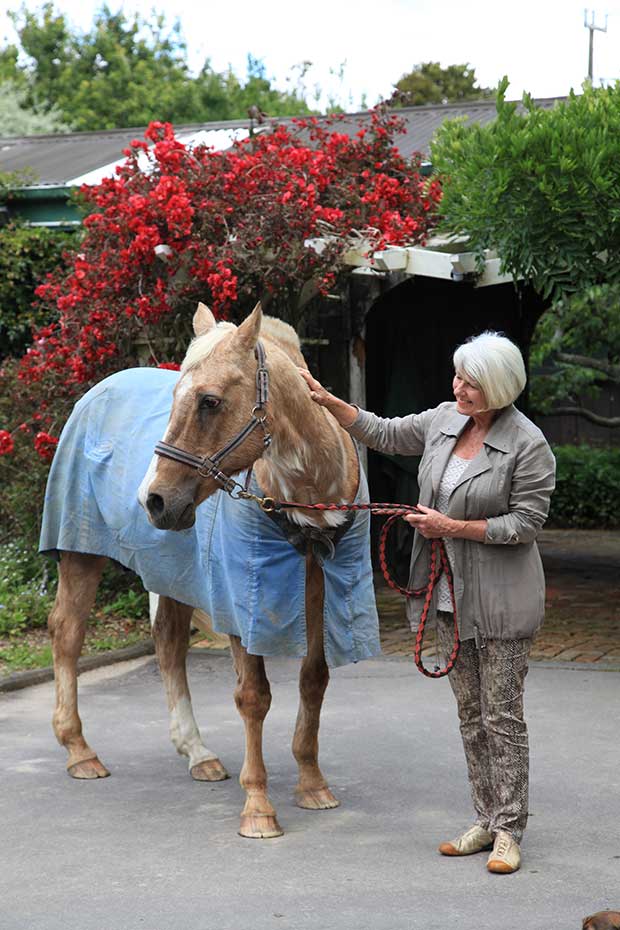 The quaint colonial stables sparked an idea: Peter could buy a racehorse and start a training operation on the property. He went half shares in a grey mare called Kerry Lane. A rank outsider, she took the Auckland Cup in 1986 by a country mile.

“It hasn’t been all downhill since that first win,” says Peter, “but there aren’t too many like her.” When visitors book to see the garden, Sherin dashes down to the pond where The Jazz Men by Hamilton-based artist Marti Wong play and stashes her portable speaker in the bushes so the music floats mysteriously out over the water.

So while Sherin didn’t end up with cows to herd or calves to feed, she nevertheless had four-legged beasts to consider. In time, the Walkers bought up five more titles and the whole 72 hectares had to, first and foremost, be made safe for flighty young thoroughbreds.

The new land was far from ideal — there were three streams, and the property was dotted with towering humps where the previous farmer had dug drainage and piled up the clay. The Walkers, unaccustomed to working the land, took common sense as their guide. 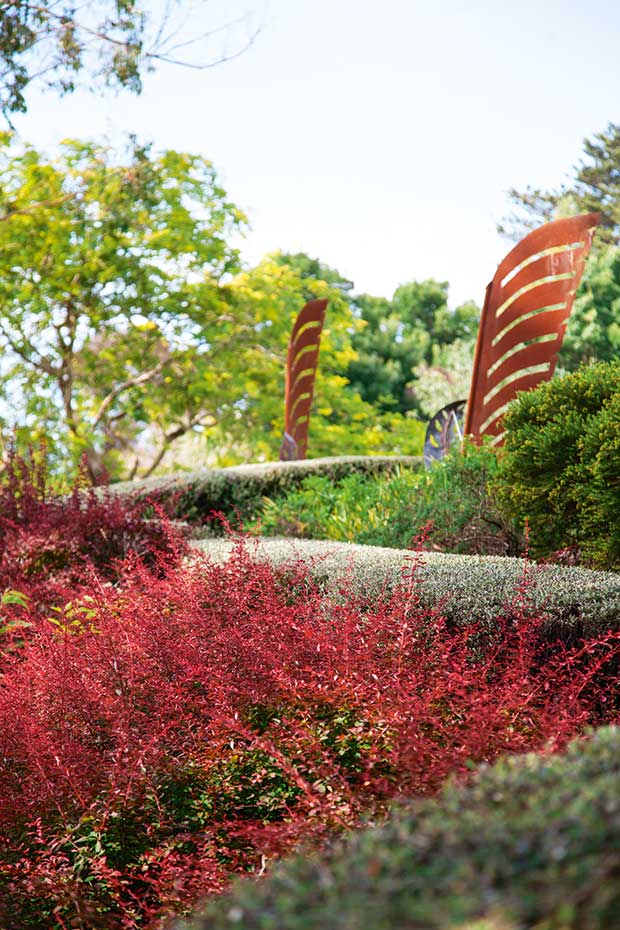 They cleared gullies of gorse, blackberry and rubbish, fenced off the steep parts, flattened out the peaks. Then they worked with the natural landscape to form ponds, digging them out one by one, bringing in rocks to stabilize the banks.

It took years of hard graft but, with the backdrop sorted, they got to thinking about planting.

“Pete met a landscaper who came up with a plan for lavender, azalea and rhododendrons but I knew one thing from my mother’s garden — you can’t put those plants into clay,” says Sherin. Pete said: “You look like you’ve got to grips with it. Do you want to do it instead?” 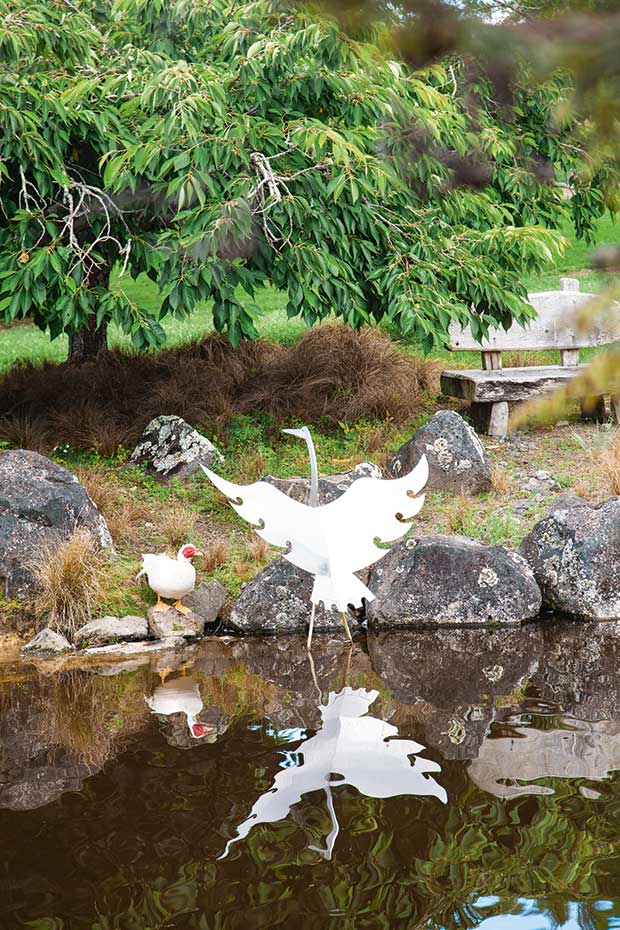 Thus began Sherin’s transformation. Her mother must have been thrilled when she was asked for advice. “Mum was really helpful. She had pages and pages of information about trees in particular.”

More stories you might like:
How this New Plymouth project director kicked workplace sexism to the kerb

Today, Ashford Lodge — a name they inherited when they bought the land — is known among gardeners for its wonderful trees in parklike grounds. And the Walkers have planted thousands — liquidambar, oak, nyssa gum, ginkgo, maple and cherry thrive in this microclimate.

In autumn, they put on a flavescent show, changing hue from golden to russet. “We had some Canadians drive in off the road to tell us the colours were just as good as they get over there,” says Sherin. 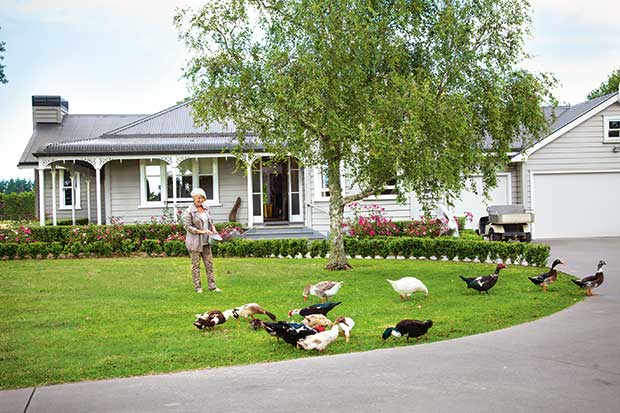 The rescued birds are fed a diet of maize, vitamins and minerals every day.

Learning the ropes, she’s had inspiration and help from many others over the decades: sculptor James Wright created the trails, built waterfalls and 12 of his works enhance the landscape. One-time neighbour and landscaper Annette Sloog also brought her talent to Sherin’s vision.

“She had a gift for placing plants to achieve that peaceful, flowing garden with the wow factor.”

But the constant driving force has remained with Sherin who can tell you the intricacies of planting holes — they involve an octopus-like drainage soak — and how they mulch and compost every year to gain more soil.

She has even been known to hang on to tree trunks as she swings around them to weed the steep banks. 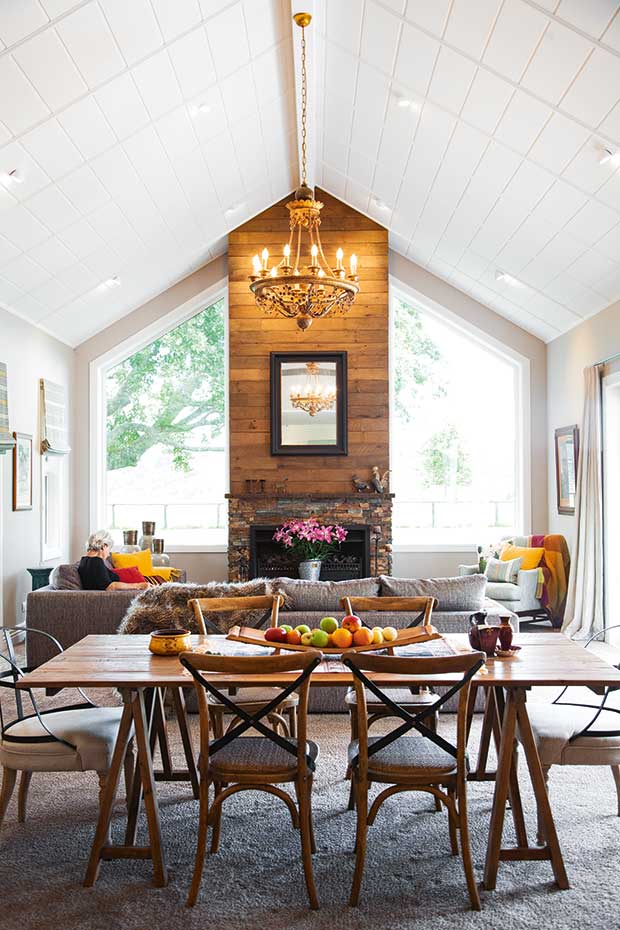 The chimney breast is covered in floorboards repurposed from the one part of the house during the renovation. The chandelier is Venetian.

Four years ago the Walkers altered and extended the kauri cottage on the part of the property where they now live (horse trainer Jo Surgenor now occupies the Keith Hay house near the stables). Although it was “falling down around our ears”, they felt its history worth saving.

“The harbour master once lived here. He traveled up the river on his scow, blasted the land for rocks to make a road, and used bullocks to move them around,” says Sherin.

The couple’s son Jason, a trained engineer, was keen to help with the substantial project. He kept the original façade and drew up a design that recycled the timber pulled from the floor and walls. Now that kauri is repurposed in the kitchen bench, sideboards, bathroom cupboards and on the breast of the chimney that is a focal point of the winter lounge with its magnificent cathedral ceiling. Looking towards the kitchen from the winter lounge where the Walkers’ son Jason designed the cathedral ceiling so it was clean-lined, with no beams.

“The lounge looks out to an oak tree — one of the few we didn’t plant — which the experts say is about 180 years old,” says Sherin.

Beneath its spreading branches and surrounded by lawn, the “new” home looks well settled in this environment. Bronze racing trophies, a soapstone labrador (“Pete wanted a dog”) and black and white photographs of the area (“they came from the Clevedon pub which we still part own”) bring character to the colonial-style home.

Under the coffee table in the living room, a copy of The Noble Horse is juxtaposed with the children’s storybook Noisy Bottoms — a hilarious push-button adventure and a clue that grandchildren are regulars here. 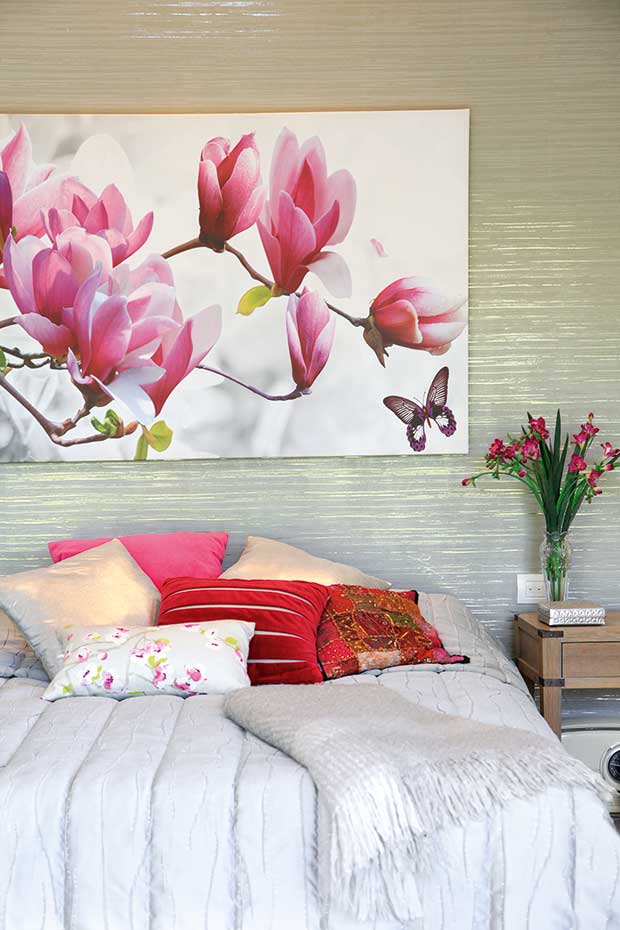 The colour theme in Sherin’s bedroom was inspired by the spring show of flowering cherries just outside the windows.

Daughter Kelli and her husband Simon live on the property where they run their boutique fermentery, Forage & Ferment, bubbling up gut-friendly raw products like wild sauerkraut and kimchi. Sherin grows kawakawa for the kraut and enjoys frequent visits from the couple’s three boys.

The youngest, three-year-old Harley, loves to jump aboard his nana’s golf cart for a tiki tour of the garden, ducks rushing out the way before them, Sherin pointing out trees and works of art. If she’s busy, he’ll help grandad on the ride-on mower. The lawns take 15 hours to finish, and the Walkers have their work cut out keeping everything shipshape. Photographs of historic Clevedon hang above an antique oak sideboard.

He’s curmudgeonly about the energy and expense required to run Ashford Lodge, but it’s not hard to see beyond the bluster. And the couple has a succession plan — to sell some one-acre sections (about 4000 square metres), north-facing overlooking the main pond.

“It’s a way for us to share in the upkeep of the grounds and means we can live here longer,” says Peter. 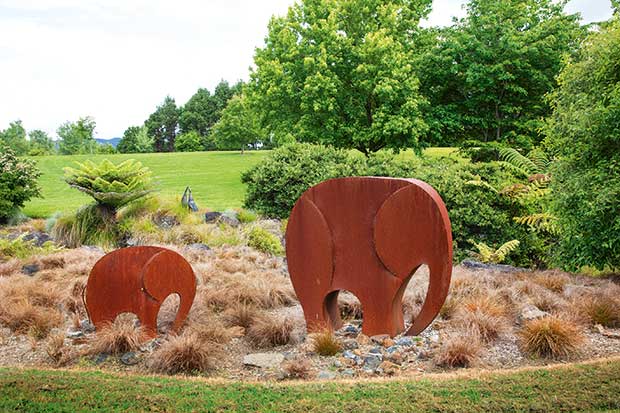 An African corner where James Wright’s elephants in rusting steel march through the grasses; the rescued birds are fed a diet of maize, vitamins and minerals every day.

Several times a year Sherin hosts a garden ramble for charity. In the early days, the money went to bird rescue. More than 80 injured birds — mainly ducks and geese — now live in the garden.

“There was one duck that had acid thrown in her face, and Cinderella (the bandy-legged goose) arrived with no feathers,” she says.

Recently, she has become involved with Animals Asia, a charity aimed at ending bear-bile farming in China. “I read a story and was fascinated; bears are put in cages and milked for their bile which is used in traditional medicine.”

Whangarei-born Jill Robinson founded the organization in 1998 and has rescued 600 moon bears to date, caring from them in sanctuaries. Sherin was filled with admiration for Jill’s work.

“She negotiates with the Chinese government and raises funds to pay off the owners so she can rehabilitate the bears.”