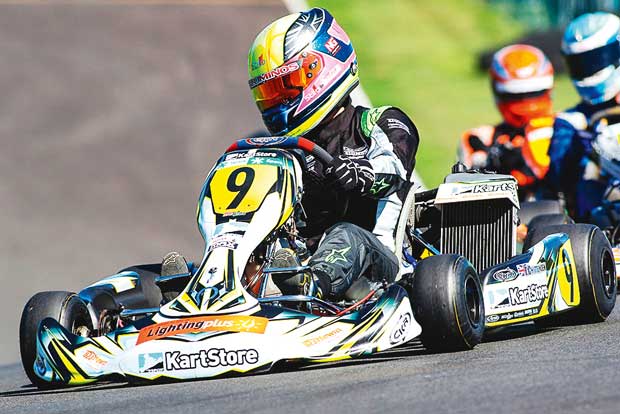 Tiff Chittenden behind the wheel.

Top go-karter Tiff Chittenden is teaching a new generation of speedsters how to tackle the track.

Go-karting champion Tiff Chittenden fines her students $1 every time they physically turn around during training. Karting isn’t a sport for looking back, that’s distracting. What’s more important is the road ahead.
Now 35, Tiff was born to parents heavily involved in motorsport racing and there was no chance of her picking up a stethoscope or ballet shoes as a child – she was destined for a racing helmet. Not one to push, however, her father let her find her own way to karting. She did so quickly. At 12 she competed in her first race and won – as she did the following 10. Hooked on the adrenaline, speed and the fact that it never hurt as much as falling off her beloved BMX bike, Tiff joined her siblings and dad on the circuit. Sponsors followed – and soon discovered that having a brilliant young female driver was good for business. “The dads were quick to decide that if a girl was beating their son, it was down to equipment – not talent – so they went out and brought the same gear. Turns out it was the girl.” 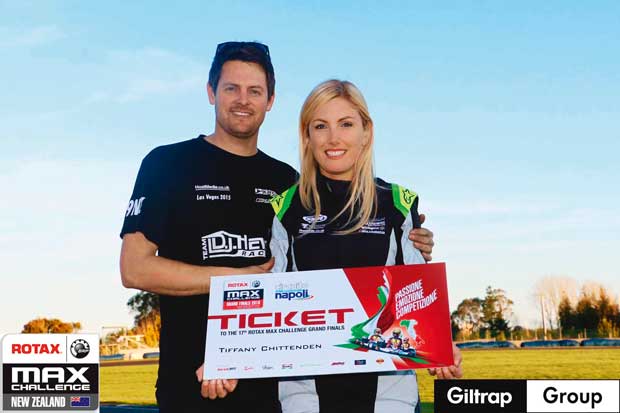 Tiff and her partner Matthew Hamilton.

Tiff doesn’t particularly enjoy playing the female card. Karting is judged regardless of gender, so the races are mixed and ranked accordingly. She’s currently the number one female driver in the series, but would rather be known as the sixth best driver overall. In 2007, she was the first woman to win the British National Karting Championship and she’s heading to the World Championship in Italy in October after qualifying second in New Zealand. This will be the first time she’s flown New Zealand’s flag at the World Champs.
Born in England she made the move to Aotearoa in 2014 to join partner Matthew Hamilton, a 13-time New Zealand karting champion. “New Zealand has a lot of young female drivers compared with other countries so the industry has been welcoming. But at the end of the day, truly competitive karters don’t want to be beaten by anyone, male or female.”

When not on the track, Tiff gives others a chance in the hot seat, whether it’s training the next generation, giving corporates a thrill (and wobbly legs) by hurtling around a course or training road drivers how to handle icy conditions. Like many, her love of karting led to a career behind the wheel of performance cars and she’s raced and demonstrated for Aston Martin and Porsche. While she doesn’t often look behind her (she’s good at practicing what she preaches), she’s sometimes reminded of the choices she’s had to make.
“I’ve sacrificed so much to get where I am. At 16 I had to decide between racing and joining friends at parties, and that’s what I have to ask my students – do you want this enough? Do you want to give up friends, or rugby? But without those choices I wouldn’t be where I am, have met friends or my partner or I wouldn’t be heading to the Worlds.” With eyes focused forward, that’s one less dollar in the fund.

KARTED OFF?
“Kart racing is competitive,” says Tiff. “It’s a talent-based sport; at the World Champs, all karts, tyres and weights are exactly the same – the playing field is even and the best driver wins. It is less inhibited by money than other forms of racing where even the best drivers need serious money to be able to win.” Like all motorsport, there’s some danger (Tiff still has limited feeling in her right lower leg), since the karts can reach speeds of up to 100 kilometres per hour, but the focus is on safe driving. For those looking to get involved, start with a local club who may have karts to borrow. For more information and a list of local clubs, visit kartsport.org.nz. For more on Tiff, visit tiffchittenden.com

More stories you might like:
This Raglan couple rolled up their sleeves to transform their 14ha block into a tiny-home retreat

Saving the world through cake

Inside the world of ultra-marathon running