Baking is certainly not a slice of cake and all foodies fall short sometimes, says Lucy Corry.

Picture this: it’s a sunny spring afternoon in a small town on the West Coast of the South Island at the end of the school holidays. Outside, my adorable two-year-old nephew is squealing in delight as his grandmother, the dog and my daughter chase him around the garden.

Inside, my husband is preparing his latest Sunday night dinner special: oven-fried chicken and a vast amount of cheese-laden baked mashed potato to feed six adults and two children (eat your heart out, Colonel Sanders).

I’ve got two jobs — preparing a slaw to accompany the chicken and mash and making a birthday cake for dessert. It should be easy, right? I mean, I’ve managed far more complicated tasks in far less benign surroundings. Cooking in my mother-in-law’s newly remodelled kitchen should be a piece of proverbial cake. 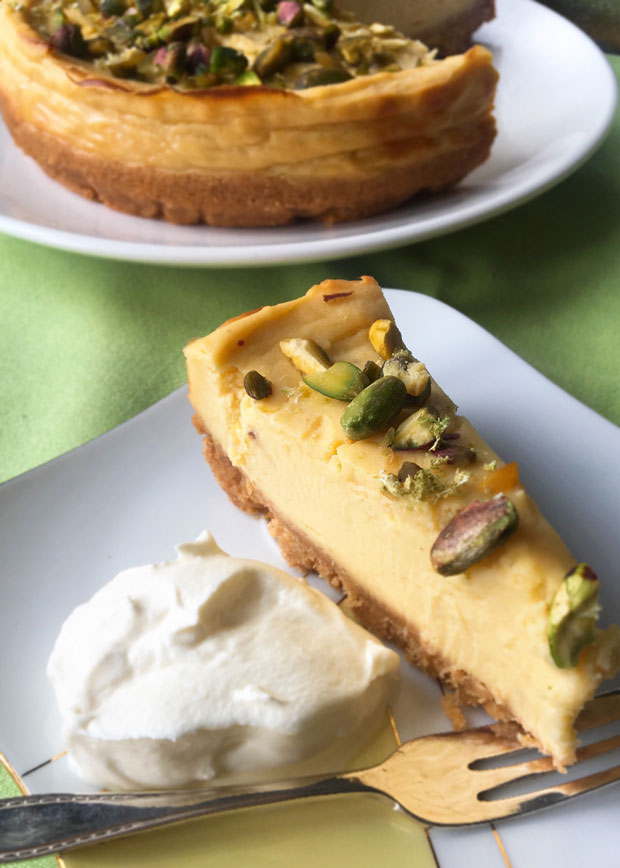 Kumara and Pistachio Cheesecake from my new cookbook, Homecooked.

Or so you’d think. My first mistake is consulting my husband on the size of the cake required. He raises an eyebrow, while peeling a colossal pile of potatoes, to indicate that bigger will be better in this circumstance. I have no problem with that, until I discover that my mother-in-law’s cake tins haven’t got the memo.

This means performing some mind-bending recipe calculations that make me wish I’d paid more attention in sixth form maths. I only have a digital copy of the recipe (a very easy and delicious chocolate banana cake from Helen Jackson) so I need to read it on the laptop propped up on the kitchen bench.

Every time I go to check and mentally multiply an ingredient, the screensaver comes on and I have to wipe my hands and enter a very secure but ridiculously long password. In the midst of this process, the dog gets banished from the outside games and needs some attention. At some point, while measuring cocoa, I have a moment of brain fade and add too much. 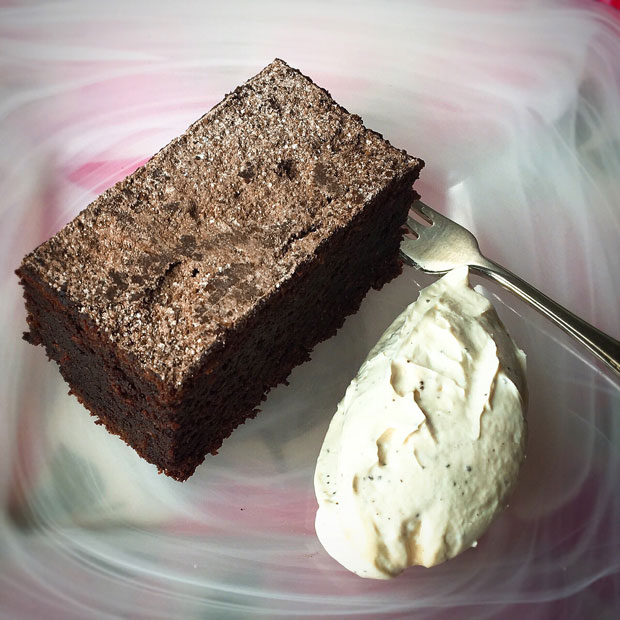 ‘Kim and Kristy’s Chocolate Slab’: a time-honoured recipe (on thekitchenmaid.co.nz) featuring the holy trinity of butter, chocolate and sugar.

I manage to rescue the situation – sort of – by scooping cocoa back out of the bowl. I throw in the rest of the ingredients, fold them all together and divide the mixture between the prepared tins. I slide them into the immaculate new oven and begin the clean-up before starting the slaw.

It’s only when I get the vegetables out that it hits me: I forgot to add a cup of yoghurt to the mixture. I explain the situation to my husband and we peer in the oven, where the cakes appear to be rising. “It might be alright,” he says with signature optimism. “They’ll never know!”

Emboldened by his confidence, I make chocolate ganache and a batch of chocolate mousse with which to sandwich the layers together. My daughter materialises, lured by the scent of melted chocolate, eager to decorate the cake. My husband appears, asking when he can put the potato and chicken in the oven.

I take the cakes out and prod them gingerly. They have risen, but there’s something definitely not right about them. Still, that’s nothing that ganache and mousse can’t solve, right? I whip some cream just to make sure, locate what looks to be raspberry jam in the fridge, and put the cakes outside to cool. 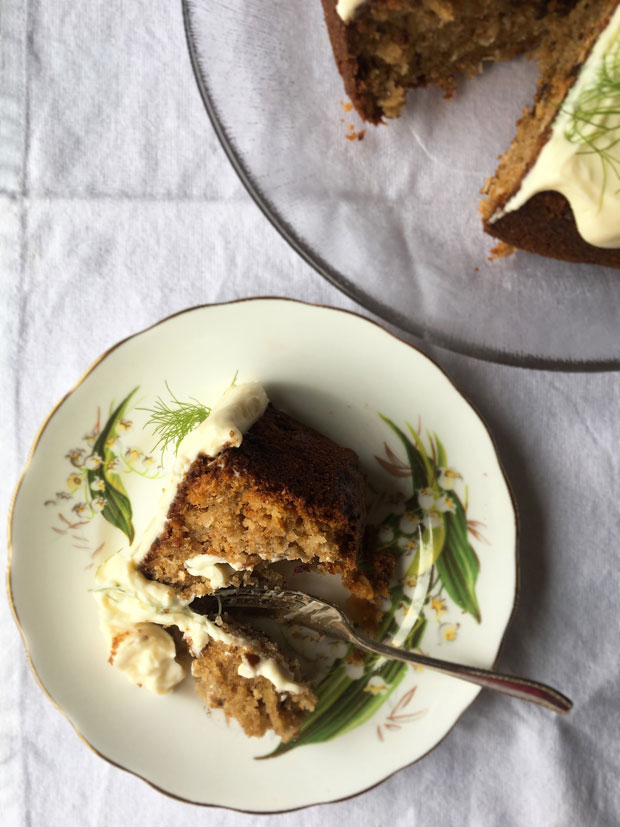 Fennel and Date Cake from my cookbook, Homecooked.

Everyone gathers at the table and we eat. My sister-in-law looks out the window at the giant hockey pucks cooling outside and says, “what ARE those?” I smile broadly and tell her they’re a surprise before hustling them into the kitchen. My plan to cut them into layers is looking a bit shaky.

This cake usually has a beautiful texture but these are like dried out kitchen sponge. I’m just about to spoon on a big dollop of the jam when I realise that it’s actually beetroot chutney. I ditch the jam plan and smooth over some mousse and whipped cream before adding another layer. You don’t have to be an engineer to sense that this construction is structurally unsound.

My daughter appears at my elbow as I manoeuver the final layer into place and it fractures into bits. I mutter every swear word I know under my breath. “Mum,” she says with the brutal frankness of the young, “it’s not looking very good!” Undeterred, I pour over the ganache and tell her she can put as many marshmallows on top as she likes. My Chocolate Cherry Cake (from thekitchenmaid.co.nz) is a light and lovely alternative to a heavy fruit cake.

By this time, the cake is starting to resemble a horror from Nailed It!, the Netflix baking show where people commit baking crimes on a regular basis. My instinct is to a) run out the door and never come back or b) throw the cake in the rubbish. Instead, I plaster on a grimace-like grin and carry the unholy mess to the table.

Here, the recipients greet it with shock and awe disguised as happy anticipation. I run them through the sorry tale, apologise profusely and insist that no one has to eat it. “The cook should never apologise,” says my mother-in-law kindly. “Cake!” shouts the two-year-old. “I’ll have some,” my father-in-law says. 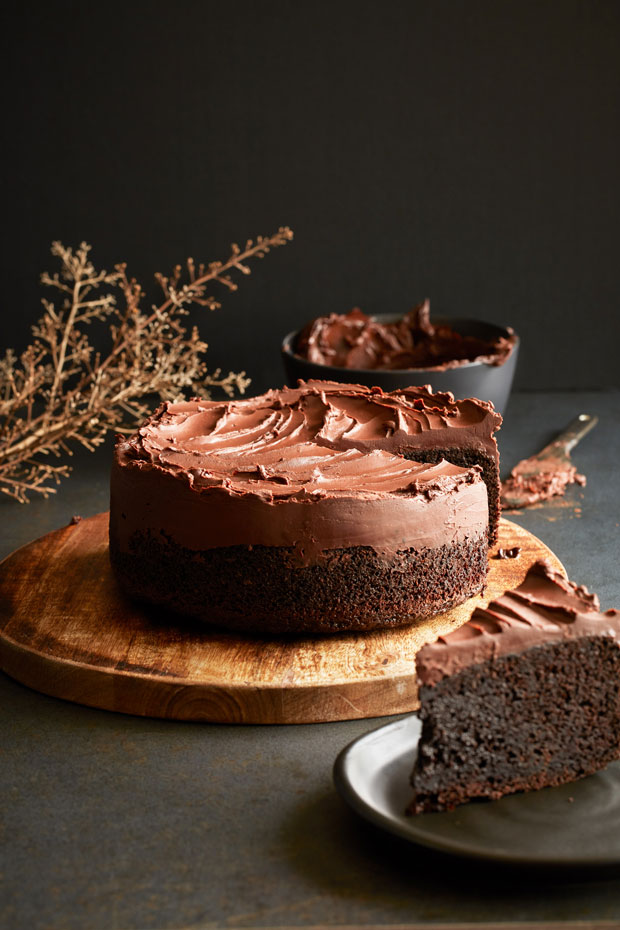 Suffice to say, the disaster in Westport looked nothing like my chocolate cake from Homecooked.

It turns out that the cake is indeed every bit as dry as I feared, but my family sweetly and doggedly wolf it down. It’s a good reminder of the absolute importance of reading the recipe – and that people who are always grateful to be cooked for are people to be treasured.

If you like to cook – or to be cooked for – I’m hoping you’ll like my new book, Homecooked, out this month. It’s a collection of very cookable and approachable recipes for every New Zealand season (including some great cake recipes that not even I can stuff up). Happy cooking!