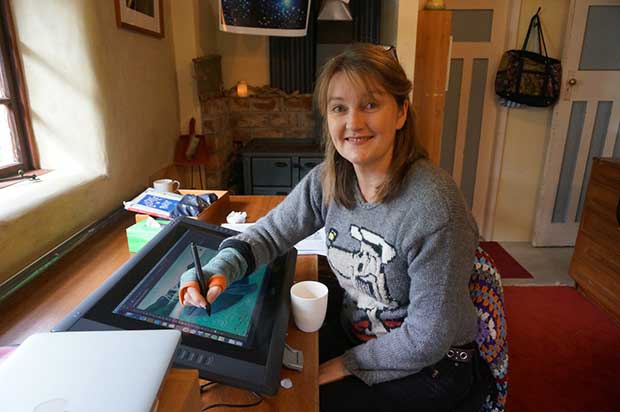 Ruth Paul is a children’s book writer and illustrator who shares her semi-rural lifestyle with her husband, sons, dog Teddy, and other wandering wildlife. She’s also just won Best Picture Book at the recent Children and Young Adult Book Awards.

It’s a spot of luck that Ruth Paul makes her living telling tales about animals. Life on a 20-hectare block at Makara, near Wellington, means she must deal with wildlife infiltrating her home studio, whether it be the ginger-haired piglet currently resident in the bathroom or a slow-droning queen wasp intent on building her family.

Using the humour that boosts her books above the bunch, she interrupts the conversation to calmly guide Mama Wasp out the window (rather than inflict the sudden death urged by this writer) and to shut the bathroom door firmly against the porker, who is deceased. (FYI, it’s a food gift from a generous neighbour – Ruth’s husband had hung it there, “out of the way”.) 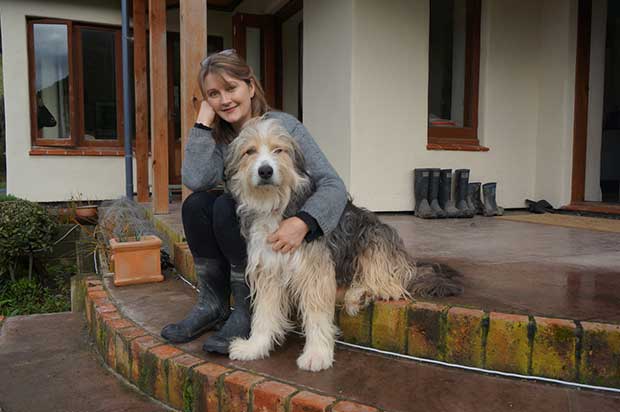 While the imagined story of a wandering wasp may not find its way into her next picture book, and children generally prefer their storybook animals breathing, it’s all material. For 18 years, Ruth has been writing and illustrating children’s books, drawing on whatever takes her fancy, and which she believes will also tickle children.
“It’s about taking a big idea and distilling it. If it’s accessible then generally kids can understand it. And the minute you put some pictures with it they understand even more,” she says.

That might be riffing with her two sons on the various names for knickers (The Animal Undie Ball) or blowing bubbles (The King’s Bubbles), misdemeanors from the family’s bearded/border collie, Teddy (Bad Dog Flash) or something tiny trying to find its place in a big, big world (I Am Jellyfish).

And she’s darned good at it – among her other prizes, I Am Jellyfish won Best Picture Book at the New Zealand Book Awards for Children and Young Adults in August.
Perhaps carrying just as much prestige, Bad Dog Flash was selected – alongside faves such as Hairy McLairy – for insertion in a New Zealand favourites parcel sent to Prince Louis, the youngest British royal. 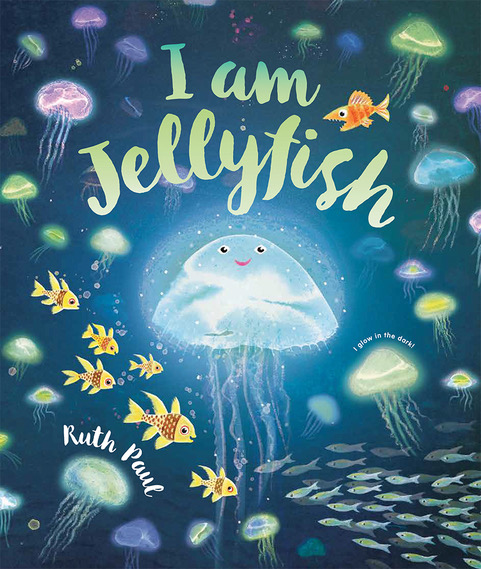 Of the reasons for her inclusion, selector Kate De Goldi said: “Ruth Paul’s propulsive rhythms and rhymes beg for audience participation… The misjudgements and scrapes of her hapless pup Flash are rendered in a wonderfully compressed text with a strong beat and crunchy consonants, and a regular chorus to be howled by all: ‘Bad Dog Flash!’”

Ruth is self-deprecating about the book’s selection but is happy to accept the honour of being included. “Especially in the company of Linley Dodd. This is somebody saying, ‘We think we you have a future.’ It is a respectful nod in some way, which is nice.” Being exposed to the highest strata of the British book-buying market can’t be bad either. Internet excluded, Ruth sells only “one or two” books in the United Kingdom but more in the United States. Not long ago she acquired an agent in the US – her first ever agent – which means more impending international publication and recognition.
By design, her books are generally not too Kiwi-ified. “Most of my books could sit anywhere, and where I do use people I focus on having diverse faces. There’s a big diversity movement in picture books at present which is well overdue.”

Ruth’s had books translated into te reo Māori, French Canadian, Spanish, Mandarin and Korean. The books include her first picture book, The Animal Undie Ball, which matches multitudes of English undie names with animals. “I can’t get my head around that. How you translate nicknames for underwear and then rhyme them with animals? I think a lot of the time you must lose the rhyming factor or the metre.” Still, the books sell. 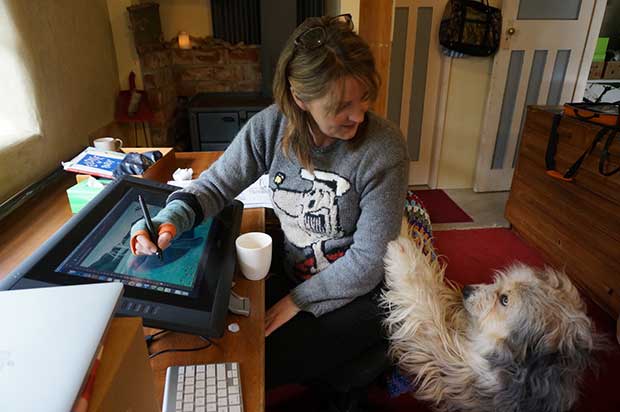 Which is great, because Ruth doesn’t get up in the morning, walk out in all weathers across the gravel drive to her studio, and sit at her desk, writing and drawing – these days often using a digital tablet called a Cintiq hooked up to an Apple Mac – to meet publishers’ deadlines for nothing.

“I’m probably at my desk six hours a day, five days a week. My deadlines all compete and I have to keep working or I won’t make them. I can guarantee that illustrating will always take much me longer than I thought. What happens is I’ll get partway through then change my mind about what looks good, so I’ll have to go back and adjust all the pictures. There’s a lot of backtracking.”

While most of Ruth’s books don’t have a New Zealand theme, her latest book does. Little Hector and the Big Blue Whale is the story of an endangered hectors dolphin that the publishers, Penguin Random House, hope will become an ongoing iconic New Zealand character. “The book does have an ecological theme, which is great for kids. They might not get it when they’re really young, but later they’ll go, ‘Really? There are only that many of them?’ It was important for me to do a book with particular relevance for New Zealand kids.” In all, Ruth’s name is on 23 books to date. Most of those are wholly her work – Little Hector and the Big Blue Whale will be the 17th title where she has a claim to both writer and illustrator, while her latest joint project, Mini Whinny – Happy Birthday to Me is produced with best-selling writer Stacy Gregg of the Pony Club Secrets books.
She says she’s loved working with Stacy, who she met on a writer’s tour of Northland (where the bus-riding writers got tipsy drinking from mini champagne bottles through a straw – seems the myth is true), but generally prefers to illustrate her copy.

“Working on my own books, there are fewer people to let down. And if I mess it up, I can change the words because that’s easier than changing the illustration. Like, ‘We’ll take out all the other horses and talk about just one horse, as shown from behind, at night. “I did worry Stacy might hate what I did, or my pictures might not be as she imagined it. But it’s a great collaboration – she thinks what I do is hilarious and I think what she’s written is hilarious. We’re not entirely sure what anyone else will think.

Despite the anxieties, artistic collaborations are welcome in an occupation that keeps one alone for hours at a time. “I’m probably a very outgoing and social person to choose a career that involves working on my own in a small room. You have to keep your networks functioning, otherwise you go insane. I have a lot of illustrator friends who I have phone coffee with, Skyping each other as we work. And I love National Radio – I chat to Jim Mora quite a lot, not that he knows about it…” 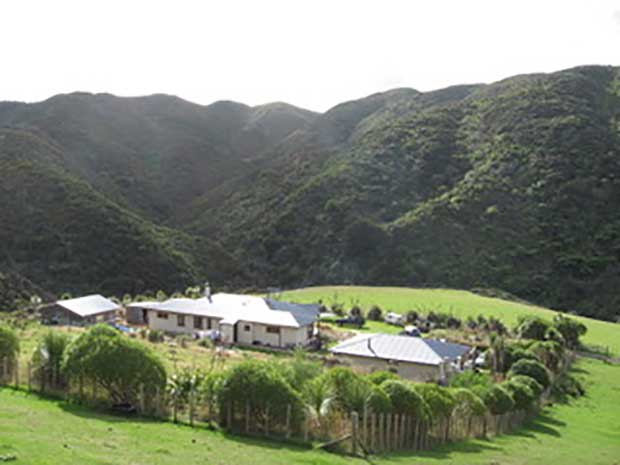 Ruth’s often on her own, too, because she, her husband and one remaining son at home, live up a long driveway that winds up from the Makara Road, through farmland, past llamas, and up to her off-grid, strawbale, Australian-style house. While parts of the drive are a touch technical, they are gradually having trouble spots concreted. “I consider it driving over my royalty cheques, which is tragic. But when visitors start parking on the main road and walking up, you know you have a problem.”

Ruth’s husband Chris Moore built the house 20 years ago, while the couple and their eldest son lived in the smaller strawbale building that’s now the garage and Ruth’s studio. The house is surrounded by farmland and bush (which Ruth would love to turn into a kiwi sanctuary one day), and was landlocked when they first moved in.  “With much begging and borrowing, we bought some of the neighbour’s property and put a road through.”

Putting in the road meant they could add a phone line, but bringing in electricity was far too expensive. So heating is mostly done via a wet-back coal range and a log burner, while a battery system with inverter is fueled via solar panels and a water wheel to provide standard 24-volt electricity. A solar hot water system heats the water in summer. 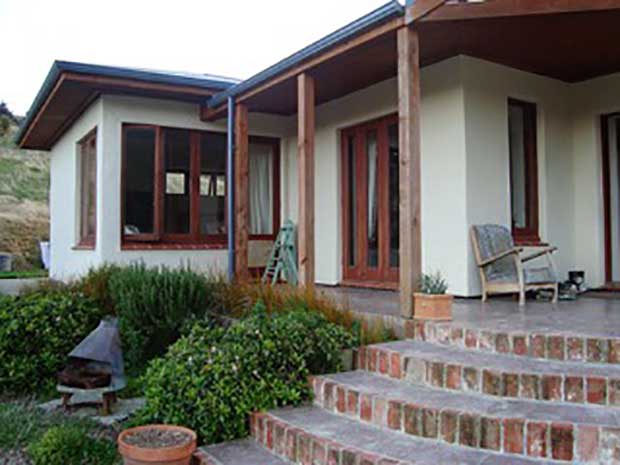 When extra oomph is called for, a generator is fired up. That might get a bit onerous for some, but Ruth is cheery about dashing out to start the generator when her son has played too much Fortnite. And she’s delighted with her strawbale house. “We built with straw as it has excellent thermal qualities, and because we generate our electricity we must be energy efficient in the way we heat and cool our house. Also, our living area is open plan but you can close it off into smaller rooms so it’s easier to heat or open it up to cool.

“The Australian-style big porch means we have eaves that keep out the sun but also stop the water hitting the top part of the plaster wall where there is an air gap for breathability. There’s no silage seeping out from under the walls yet so that’s a good sign.”

Speaking of signs, while a wasp for many is a sign to run, in some African cultures it means evolution and control over one’s life, while Native American tribal myths peg it as a symbol of productivity and order. All good talismans for a work-alone writer with deadlines to meet.

As for the piglet – that just means pork for dinner.