Case study: The missing four-week-old lamb that survived all odds The problem: Lilly was just four weeks old when she went missing. Her owners searched their block repeatedly but couldn’t find her. Eventually, suspecting foul play, they gave up hope of finding her. Almost two weeks later, their young son spotted a deep hole, about 50cm wide and 2m deep. When he peered down into it, a small voice bleated up at him.

This dark, narrow hole, filled with inches of ice-cold water, had been Lilly’s prison. She spent the whole time standing – there was no room to lie down – starved, frightened, and yet somehow she mustered the energy to bleat when it mattered most. The hole was dug out, Lilly was rescued, thin, frail, and very cold, and brought into the vet clinic first thing the next morning.

The investigation: Lilly was comatose. She was severely dehydrated, and her brain wasn’t working properly due to deathly low blood sugar levels. The outlook was grim.
She would need intensive care to have any chance at survival, including pain relief, anti-inflammatories, and anti-nausea drugs. It was either full-steam-ahead treatment
or immediate euthanasia.

Only a vet should attempt treatment of an animal in this condition. The animal’s welfare is crucial. Without intensive care and round-the-clock hospitalisation, humane euthanasia is the only acceptable option.

The treatment: We immediately ran blood tests and warmed her tiny body. Over the next 24 hours, we administered shock fluids straight into her bloodstream to rehydrate her body. We applied lubricating drops to her eyes, which were dry and sunken from the dehydration. We then added nutrients to the intravenous fluids, to take as much stress as we could off her body while it recovered.

More stories you might like:
Auckland A & P Association celebrates its 175th Anniversary at the 2018 Royal Easter Show

The goal was to stabilise her vital signs and help her regain brain function, so we could then make a full assessment of the damage to her body. Lilly’s state was dire. Her owners and vet staff agreed that when Lilly woke up, if she showed signs of pain and discomfort that wasn’t manageable, we would need to discuss humane euthanasia.

The next morning, Lilly woke up. Initially, her head was tilted, a common sign of brain malfunction. After so long drinking only muddy water, her gut flora was a mess. She had diarrhoea and preferred fibrous hay over milk, effectively weaning herself at just five weeks (compared to the normal minimum of 12 weeks). Fibrous food and probiotics would become a big part of Lilly’s recovery.

She didn’t stand for 48 hours as she was so weak. When she did, it became clear that she had stretched the tendons that run down the back of her front feet, probably when she landed hard at the bottom of the hole, front feet first. We wrapped her legs in splints to support her tendons while they healed. Lily needed 24-hour care, so each day she was bundled up into a basket and went home with Sarah.

This didn’t slow her down. She started talking to us in a hoarse, quiet voice, with an occasional soft cough due to inflamed vocal cords from prolonged bleating while trapped in the hole.Lilly improved each day, until we removed her drip. She quickly became dehydrated again.

More tests showed kidney damage from the severe dehydration she’d endured. The kidney’s primary role is to concentrate urine, which controls hydration and electrolyte balance in the body. When an animal is in kidney failure, water flows out of the body as quickly as it’s going in.

While she was otherwise happy, we had to keep her in hospital on a constant fluid drip for a further two weeks, testing her kidneys each morning to see if they had regained function. If her kidneys didn’t improve over this time, we would have to assume the damage was permanent, and she would need to be euthanised. 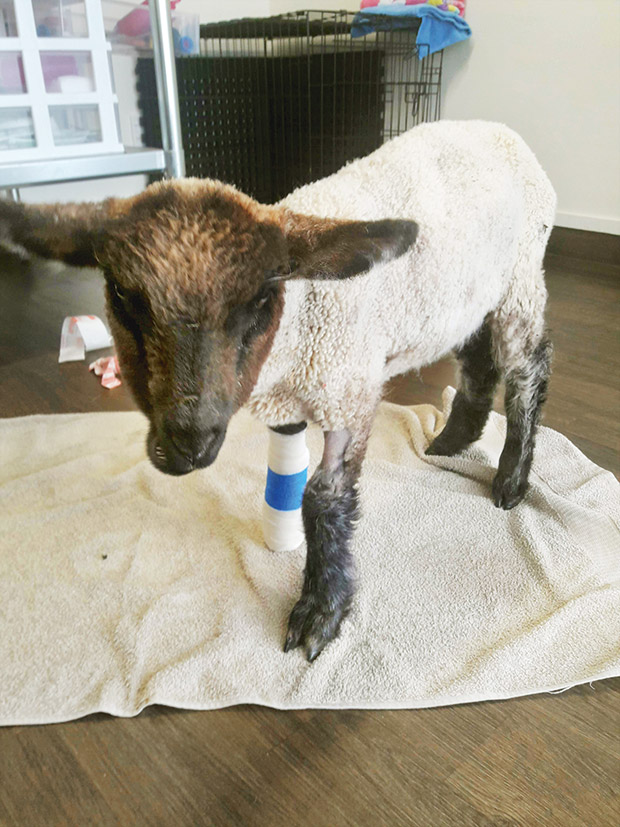 Each night, Lilly was tucked up in a special bed (a laundry basket) and I took her home. Her first night was a scary one, and she insisted on being very close to someone at all times. Eventually, we compromised. Her box sat beside the bed, and I dangled my hand into it.

After a week, her voice returned to full bleat. She was grazing consistently and wandering about easily in her wee splints. Her irritated eyes had healed, her brain was functioning normally, and her diarrhoea cleared up. She seemed happy spending her days in the sun, completely unaware that her kidneys weren’t functioning and that a fluid bag followed her everywhere she went.
Each morning she rode with me to work where we tested her kidneys for signs of life. Every morning the answer was no.

But 24 hours out from the two-week deadline, when euthanasia would take place, we got a second miracle. Lilly’s kidneys suddenly began to function, and the little survivor had overcome her final hurdle.

The result: Lilly went home, where her dedicated owners spent a further two weeks injecting supportive fluids under the skin and managing her splints. Over the next few weeks, Lilly lost all her wool. It fell out in clumps, a sign of the severe stress her body had endured. She wore a warm coat that covered her bare skin until her new wool grew in.

Once she went back to living in the flock, she eventually stopped responding to her name when they called her. In spring 2020, Lilly surprised her owners again, delivering a beautiful ewe lamb of her own.