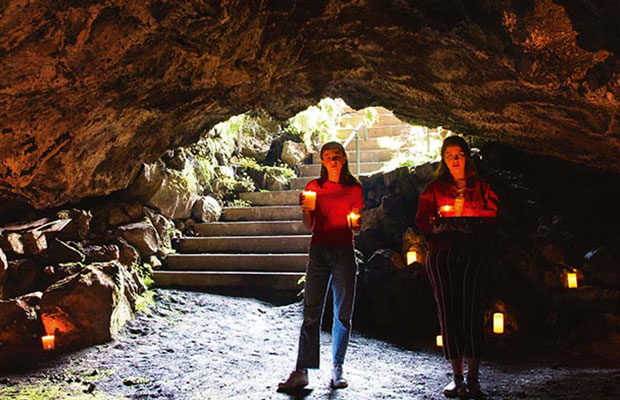 Kitty and Lola help shed a little light in the cave. Soft electric lighting is rigged up along the sides and sometimes switched off on unsuspecting visitors, giving everyone a thrill.

Some people have fairies at the bottom of their garden; the Jacob family of Mt Eden have a cave.

A long time ago, about 28,000 years in fact, there was the most horrendous belch just south of what is now Auckland’s CBD, and the area that would become known as Three Kings/Te Tātua-a-Riukiuta exploded.

The catastrophic kaboom left behind a series of caves, many of which are now lost beneath the detritus of civilization. But one of those, the one the University of Auckland calls “The Beautiful Little Cave”, is at the bottom of Annie and Sean Jacob’s garden. Or perhaps it is to the side because the garden is a little all over everywhere; it follows the traumatic scars in the earth left behind by that distant big bang, so sometimes what is up is down, and what is down is up. But, anyway, while it is commonly held that there are patupaiarehe – fairies – at the bottom of a garden, the Jacobs have a cave. 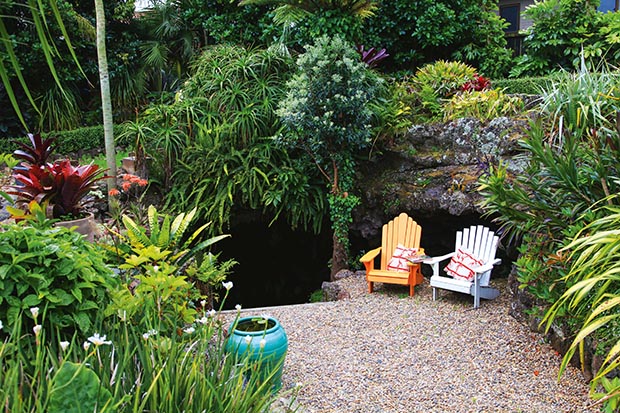 Cave wetas have decided suburbia is not for them so the only other unwelcome surprise would be forgetting to pay attention to the gap between a head and the roof in some places.

It is cool and dark inside and if any ghosts – wairua – linger, they are gentle because the nose and whiskers of the Jacobs’ little griffin/pug-cross Olive, do not falter nor twitch. The cave stretches back some 80 metres, past rockfalls and a midden of rubbish once chucked down a now-hidden vent, until it tapers to a narrow slit referred to as “The Squeeze”. Beyond that tight embrace, a slender person can explore further.

Of all the tales of this cave, one of the most recent is that of a slender person who was nearly swallowed up by the essence of the cave and her own belief. An international student arrived at an event being held by the Jacob family and asked to see the cave. A wee while later, as he was closing the gate, Sean realized he had not seen the young woman leave, and found her backpack at the bottom of the cavern stairs. 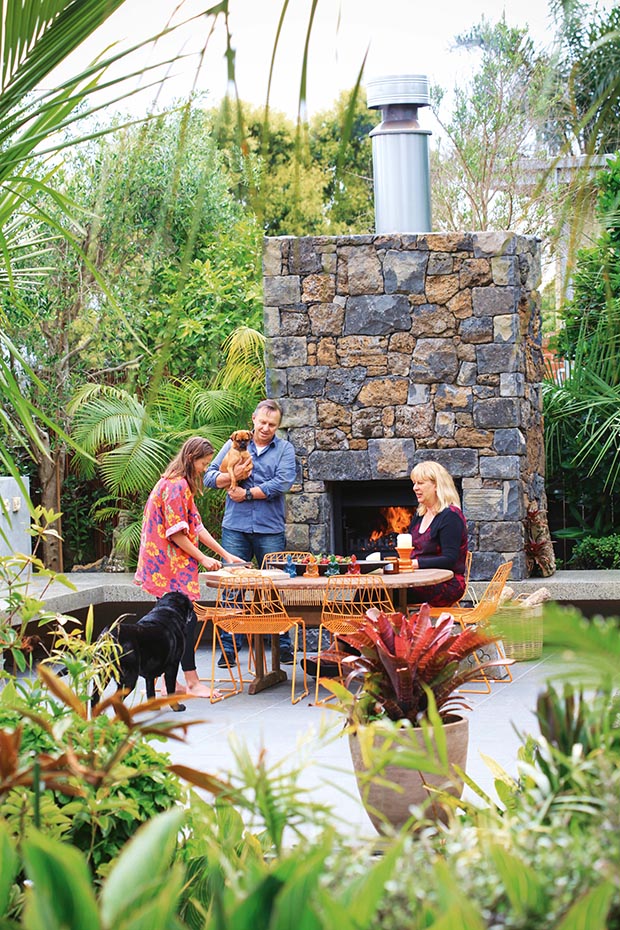 Queenie does what labs do best – eyeball food. Olive, too, is looking hopeful as Kitty plays hostess to her parents. Annie and Sean were lucky to build the deck and fireplace because if the footprint of Arch’s old shed wasn’t already there, they doubt they would have been able to get consent to build so close to the cave entrance.

They called and called but she didn’t answer. A few more increasingly anxious minutes and a few more cooees, but the only reply was the apprehensive echo of their own voices. Sean punched 111 into his phone. It was an odd call to make and a peculiar call for the emergency services to receive. How do you respond to a call about someone lost in a cave in the middle of an Auckland suburb? So, the operator sent everyone – the police, the fire brigade, the ambulance and, just in case, a helicopter. 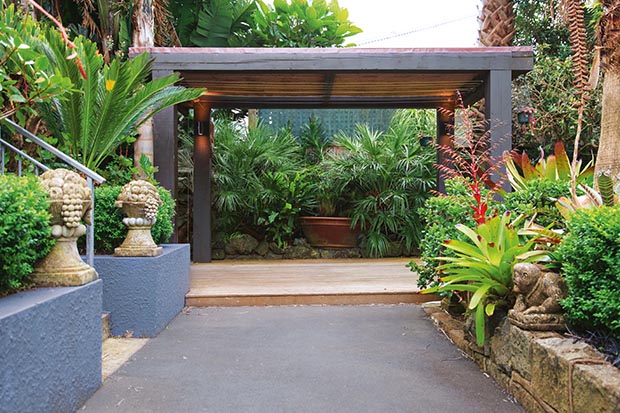 It is a family garden; they have two dogs and two teenagers, so it can’t be a fragile plot.

The Jacobs’ garden was overrun with uniforms of one kind and another and the trees bent with the wind of the clattering chopper blades. The response was heroic, which was apt as the event in which Annie and Sean had just participated was the annual Heroic Garden Festival.

What a to-do, but as the would-be rescuers contemplated “The Squeeze”, a beam of torchlight came dancing along the far walls beyond. The young woman was beside herself with…well, with what? She gabbled about myth, Māori, and some subterranean New Zealand-wide nexus of cave-dwelling iwi. It was just as well the ambulance was there because that was her taxi ride that afternoon, poor soul. The Jacobs didn’t always own the cave. When they first moved into their wee one-and-a-half-bed 1940s stone cottage, they were the neighbours. Old Arch Tollemache and his wife Edna lived next door and the cave yawned between their house and the garage that housed Arch’s pool table. After Arch had sunk his last ball and racked his last cue, Annie and Sean bought his property.

It was a lucky opportunity, as the arrival of two daughters, Lola and then Kitty, was making the walls of the cottage bulge and even their laid-back labrador Queenie was getting a bit cranky. 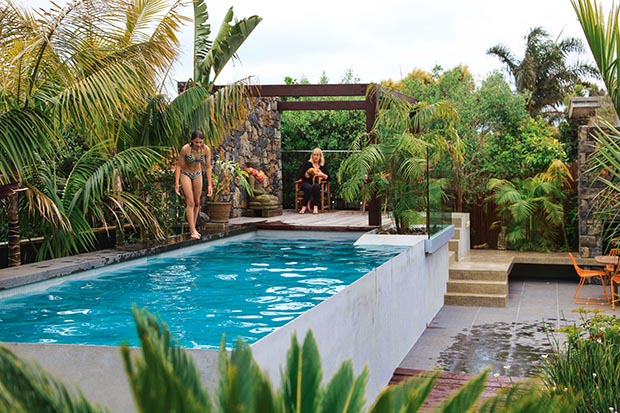 Annie’s vegetable garden made way for the pool and she is looking forward to planting a new one from scratch. Kitty thinks vegetables for garden is a fair swap and she and Lola are thrilled her dad has come through with their new summer playground.

Sean had extended the cottage already and now there was an opportunity to extend the outside as well. The sale went through just three months before the global financial crisis, so there were a few anxious moments, but if there is one thing the Jacobs know how to do, it is to keep on keeping on.

Which is what they’ve done with their garden. Neither Annie nor Sean were gardeners to start with, although Annie had fond memories of the vegetable gardens everyone seemed to have when she was a child. She remembered the potato digging and the sharing of produce between family and friends – the whole community spirit of it all – so she wasn’t averse to having a go. 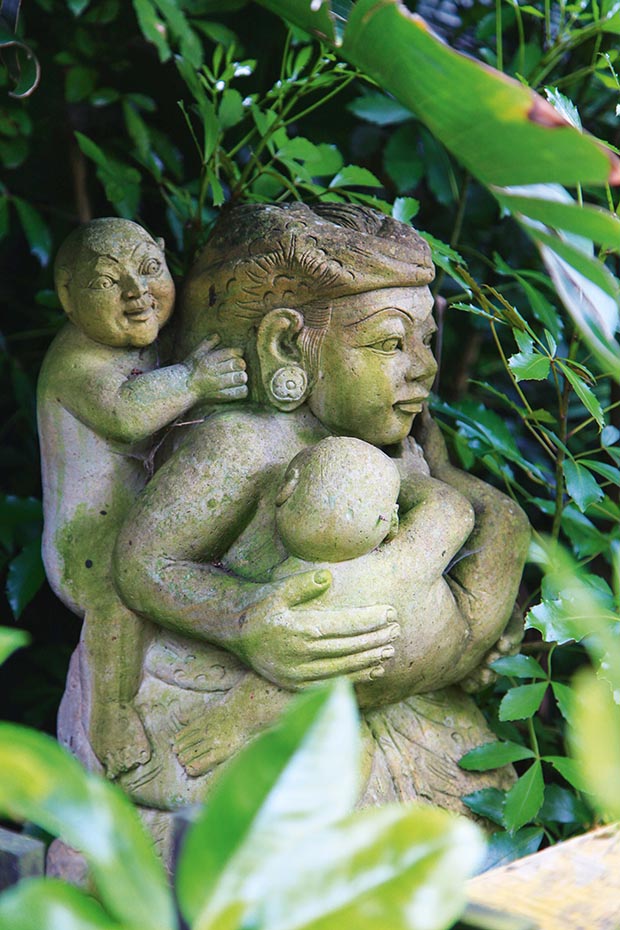 Of the many things Annie and Sean liked about Bali, it was the beautiful sandstone statues they loved the best. Annie, in particular, loved the feel and look of the stone and because it is composed of quartz or feldspar – some of the minerals most resistant to weathering – statues carved from it are durable and age beautifully.

She and Sean had pottered in the small garden behind their cottage. When visiting Bali, they had appreciated the tropical surrounds and fallen in love with the water features beloved of the Balinese. They decided to plant a few palms in their own backyard but – my word – they were expensive in New Zealand.

There was another holiday, this time to Queensland where there were wall-to-wall palm trees. Annie and Sean decided to import a couple of thousand palm seeds on the off chance that maybe 20 per cent of them would germinate. It’s true that one should be careful about what one wishes for because the Jacobs ended up with more palm trees than they could poke a frond at. They bagged them and on-bagged them. 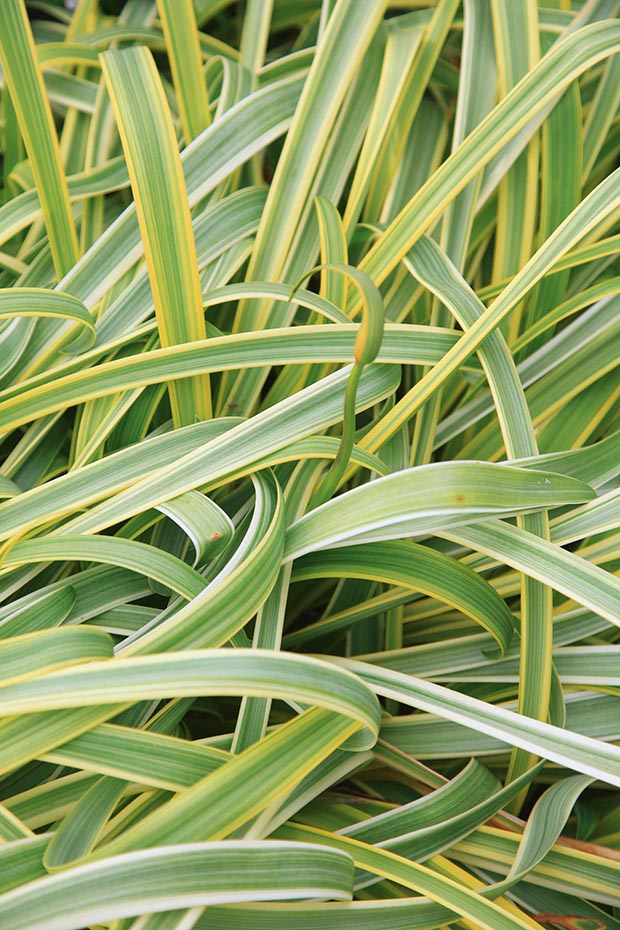 Stand in the lush tropical garden and it is hard to believe that Mt Eden’s Landscape Road was originally named for its barren, rock-ridden aspect.

They had weekends when all they did was sell palms from their driveway. Then the bottom fell out of the market as palms became so common that they were even sold on service station forecourts. It was a relief, in a way; the success of those palms had meant a lot of hard work.

Now palm-less, Sean and Annie looked around for something else and following their affinity for things Balinese, they began to import sandstone garden statues. The remnants of this project still peer out of the undergrowth. 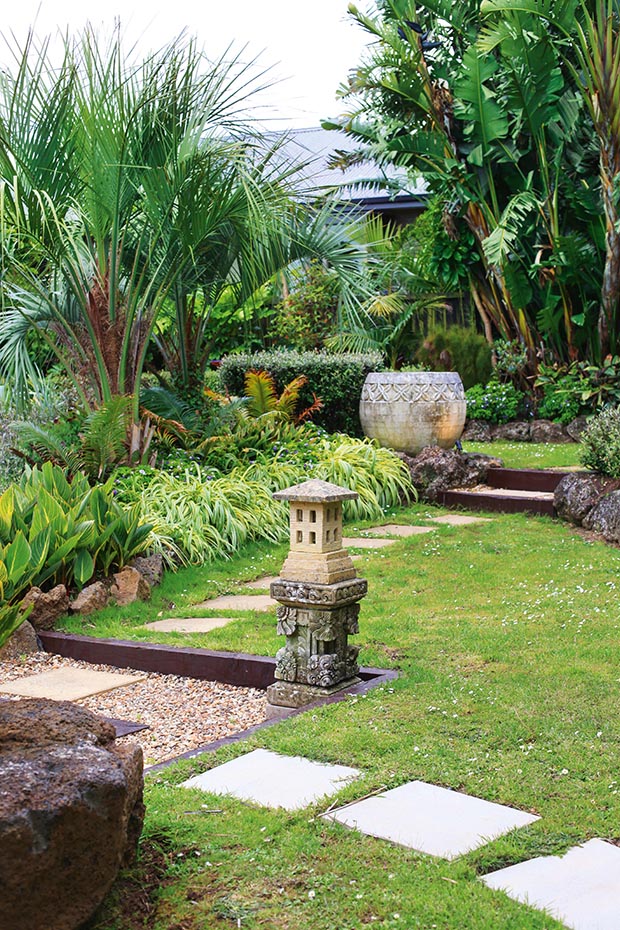 But while the importation of palm seeds and statues are in the past, they are indicative, perhaps, of Annie and Sean’s drive. Now, with the responsibilities of Queenie, Kitty, Lola and Olive, and Sean and Annie’s jobs as a director of Lahood Window Furnishings and IT project manager respectively, there are fewer forays into quirky imports but what there is, is their garden.

There is little planning in their garden. They put plants where they want, much to the consternation of those with a stricter green thumb, and they are not at all averse to changing their minds, shifting plants to new spots on a whim. It is also a family garden; they have two dogs and two teenagers, so it can’t be a fragile plot. And because it is a family garden, Annie and Sean wondered if a few changes could be made to the Heroic Garden Festival as most participants did not allow entry to children. The organizers were open to the suggestion and now kids can join in, because instead of buying one ticket to all gardens, visitors can now simply pay at the gate of the garden they want to visit, selecting, if they wish, those that will admit small people.

Annie and Sean’s garden follows the lie of the land, dictated to by the volcanic landscape, although they claim there isn’t a rock they can’t move, even if it means roping in some friends. They have poured about 150 square metres of soil; five metres here, 10 metres there. There have been successes and disasters, but it has been fun. They can sit on their new deck and raise a glass to themselves, to their foresight, their luck and above all, their hard work. And, perhaps, to that far off big bang that started it all.

CAVE WATCHING
Annie and Sean take the guardianship of the cave and the protection of these last remaining tubes very seriously and are equally resolute about protecting the cave’s integrity and quirkiness. They have had it blessed by the local iwi on two occasions. 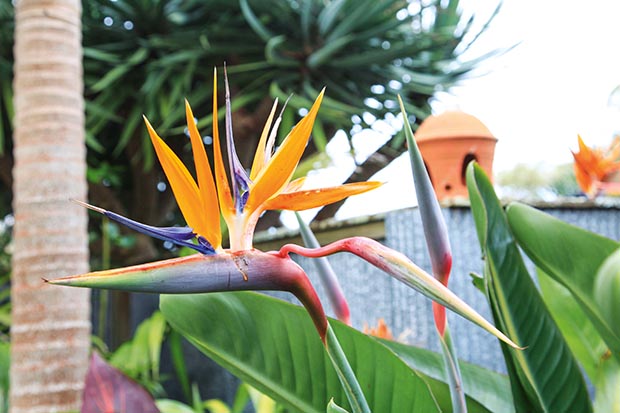 They think it is only in the last half a dozen years that the council has understood the significance of these cave systems to Auckland’s short history and believe the formations will become more and more important as people realize how Auckland came about. The cave is open to the public during the Heroic Garden Festival and is visited by university, school and scouting groups. It also featured in the science fiction television series, Under the Mountain.

Annie and Sean’s garden appears in the Heroic Garden Festival, 10 -11 February. Weekend passes are $60, and funds raised go towards Mercy Hospice Auckland, a registered charity providing specialist care to people who are dying, while supporting their families and whanau through the loss of a loved one. 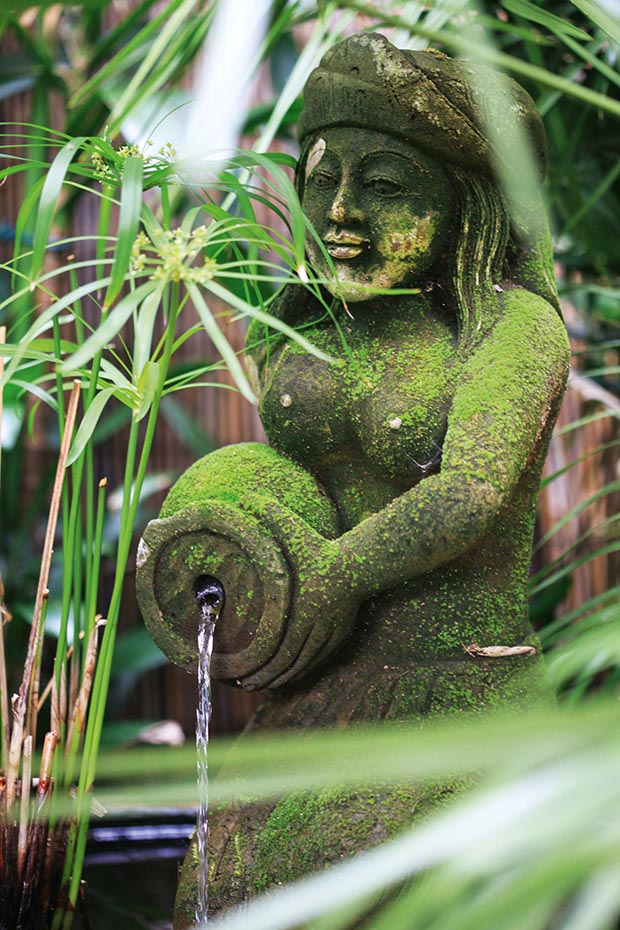