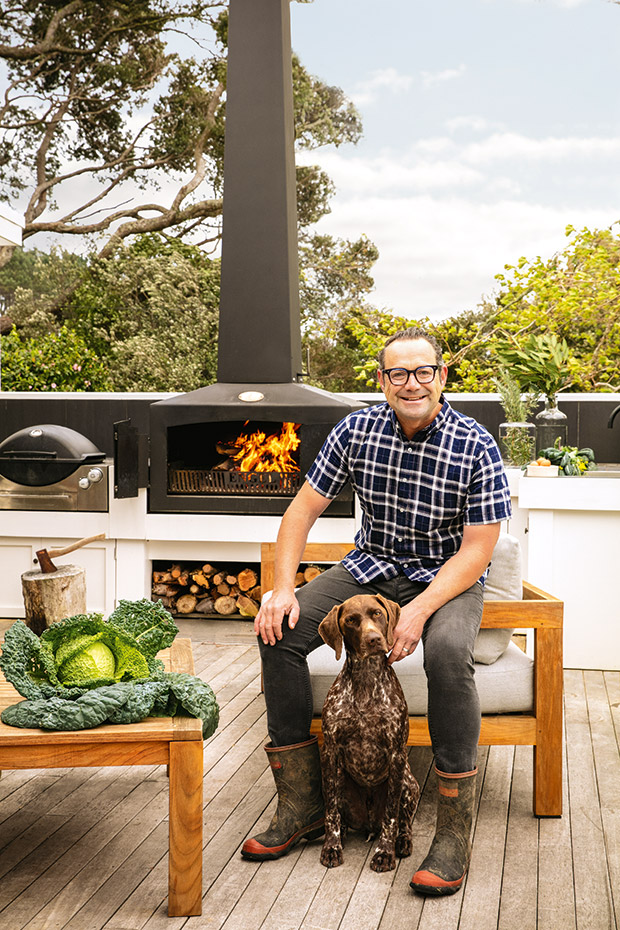 Chef Michael Van de Elzen is creating a block where everything is grown and cooked from scratch.

Michael Van de Elzen might be the celebrity in the family, but the star of the family block is waiting to say hello as soon as you open your car door.

Hector is a short-haired German pointer, his dad’s best bud, and mountain bike training partner. He’s gently sniffing around your feet, wagging his tail like a flag before you can step out of the car.

“We went through IVF treatment to have Hazel and Ivy… and then we stopped. We knew we’d never have a boy, so he’s our boy. It went in this order, we’ll get a farm, and then we’ll get a dog.” 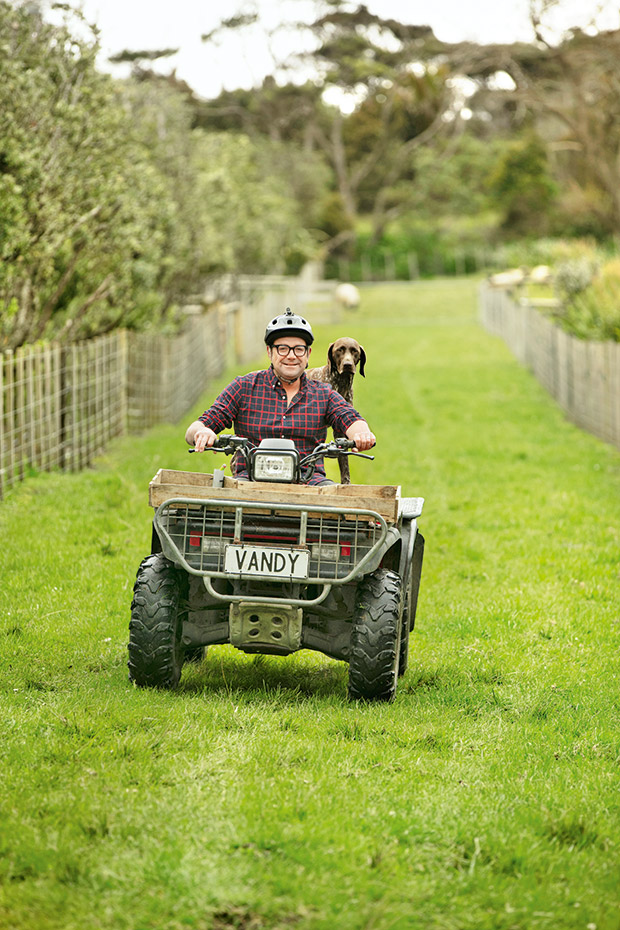 Michael is best known as the TV chef behind TVNZ’s popular show The Food Truck, and he’s soon to co-host the NZ version of Eat Well for Less. He also works with food companies to create healthy, great-tasting food options under his brand Good from Scratch.

He grew up on his family’s 8ha poultry farm with 100,000 chickens in West Auckland and wanted his daughters to enjoy the same childhood he had.

“What I loved about it was there was never a dull moment. My parents were always on the farm if I ever needed them. School holidays, you go hang out with dad and do what he’s doing.” It took almost a year to find a block that suited their needs.

“It chose us, really,” says Michael. “Dad said ‘there’s a property at Muriwai’, so we cruised out there with the kids and my sister. We didn’t even go into the house – as soon as we walked around the front and saw the view down the valley, we thought, ‘this is awesome’.

“The house was falling apart: we fell through the deck, it was quite dirty – it was just unloved – but we could see the potential. We bought it that night, no builder’s report, no LIM. Then on the Monday, we got cold feet. We got a LIM report, and it all came back fine, but I wouldn’t recommend buying a house like that!”

Gardens are starting to take shape and we are loving thus weather! #goodfromscratch #homegrown

True to Michael’s self-confessed workaholic nature – “it’s the Dutch coming out in me” – everything on the Van de Elzen’s block is ambitious. There’s an extensive vegetable garden, and a large orchard covers much of the hillside.

“There’s 300 citrus trees up there,” says Michael. “We love making lemon drinks, orange drinks, cordials. I’m a big fan of making syrups, so that’s one reason we’ve got so much.

The citrus was sourced from a commercial nursery, thanks to a chance meeting at an industry event.

“I met William, who’s a grower, at a Countdown trade show, and he was amazing. He was there with his citrus, and I told him we wanted to plant 300 trees. The conversation started, then email after email. He gave us so much advice on what to plant, how to plant, where to get trees – you can’t just go out and buy 300 citrus trees, so we went down to Tauranga to buy them off a commercial place in the back blocks of nowhere.”

More stories you might like:
'Challenge assumptions': This inspiring couple transformed a bare paddock into a certified organic block

There are beehives at the top of the hill, managed by Angus, a local beekeeper. There’s also a small herd of beef cattle, a flock of sheep, and 40-odd hens in a large run. 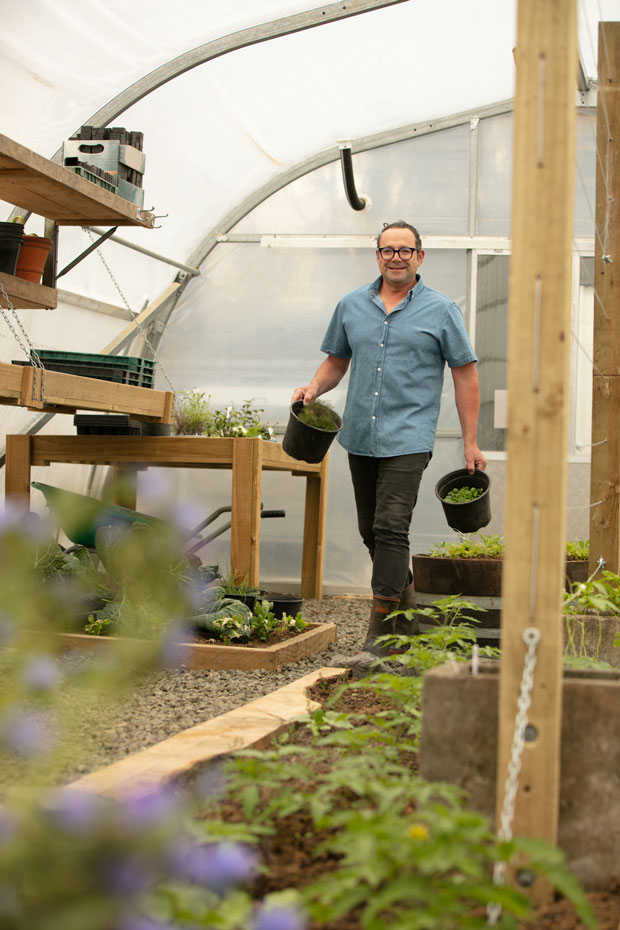 The vast garden covers almost 800m² and is full of raised beds. At one end is a 16m x 6m (96m²) Redpath tunnel house with a top vent and watering system; at the other is what will be a food stand and outdoor eating area for guests.

A gully runs through the middle of the block, channelling the water away. Bee spent hours tramping up and down it, planting hundreds of native trees. Michael says he got a much easier job, getting in his car and leaving for work.

“I think probably the biggest challenge for me is work-life balance. I’ll work seven days a week if I’m allowed to.” He might have lived on a farm growing up, but Michael says he’s still learning. 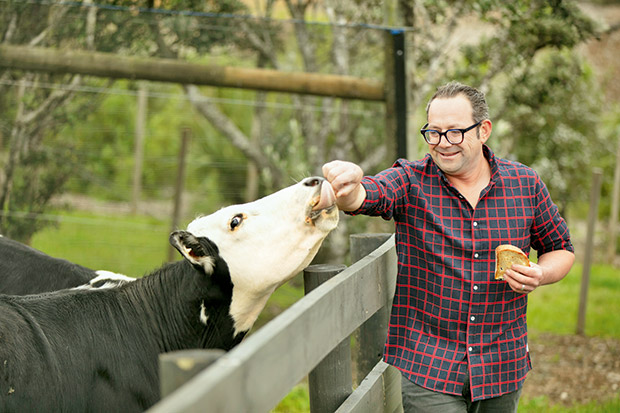 “The cows are wonderful, you put them in the paddock and they eat. I know my way around chickens. But sheep do weird things like ramming fences. We can’t get near them because they’re too skitty.”

There was another lesson when he and Bee drove their slow, gas-guzzling 1985 Toyota Hilux 111km to the Forgotten Fruits Nursery at Mangawhai to pick up their heritage fruit trees.

“It’s like driving a tractor on the road, no power steering, very slow,” says Michael. “Bee was like, ‘you’ve got to take the Hilux to fit the trees in’ but when we got there, the (bareroot) trees were like twigs. It cost us about $300 in fuel. But the Forgotten Fruits couple were such lovely people; I love to talk to people like that and get their feedback.”

He says even after four years, he and Bee are still getting used to the long commute, the lack of convenience, the organisation it takes when you need to go into town.

More stories you might like:
This boat builder in Piopio finds his anchor — in life and craftsmanship

“I think you’ve got to be committed,” says Michael. “You can guarantee on your tiredest, most stressed day when you just want to put your feet up and have a beer, something has happened. The electric fence isn’t going, the cows are in the next door neighbour’s place, the dog has chased a chicken, a cow has a twisted gut – that’s all happened to us – that it can kick you when you’re down.

“This lifestyle isn’t for everyone, but we’re lucky enough, we’ve worked hard, we’ve had a few things go our way, and we got our little slice of paradise.”

Mike’s Good From Scratch Cookery School is now open for business, offering an on-farm experience for food enthusiasts. The Good From Scratch Cookery School classes are a fun-filled day that involves picking and gathering the required ingredients for the day’s menu while learning about why they’re important. The preparation and cooking of the dishes is a hands-on experience for the participants and importantly, their labours are then enjoyed together with a selection of local wines, craft beers and homemade sodas. www.goodfromscratch.co.nz 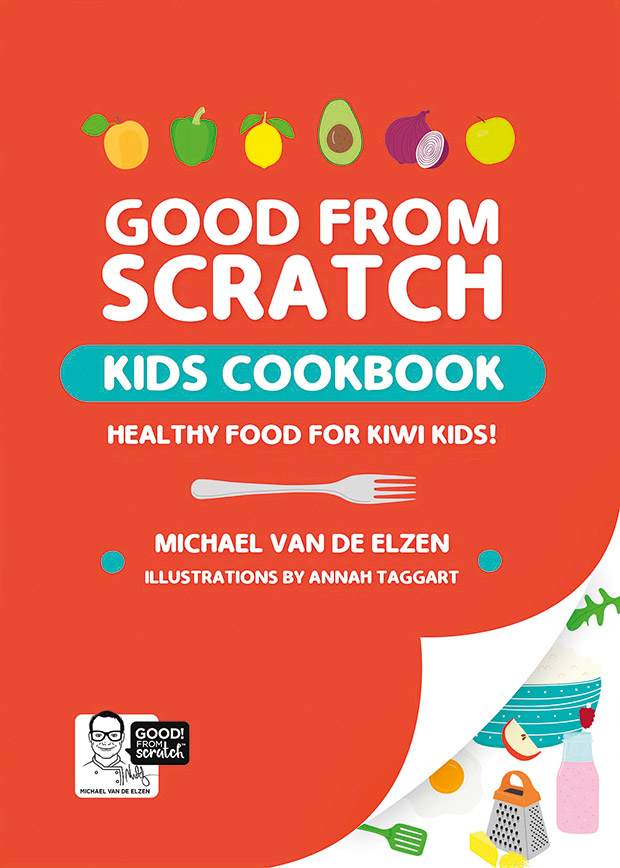 This is Michael’s fifth cookbook, collating favourite kid-friendly recipes that he cooks with daughters Hazel and Ivy, and that they cook for themselves.

The recipes all stem from his ‘Good From Scratch’ philosophy. It covers all the essentials: breakfasts, lunchbox options, after-school snacks, dinners, sweet treats, and the all-important party food.

The recipes use ingredients that don’t cost a fortune, and you won’t find any that require hours of prep.