The colourful history of carrots The carrot might seem like one of those boring but reliable veges, but they have a colourful past and a much brighter future in terms of health and organic growing. 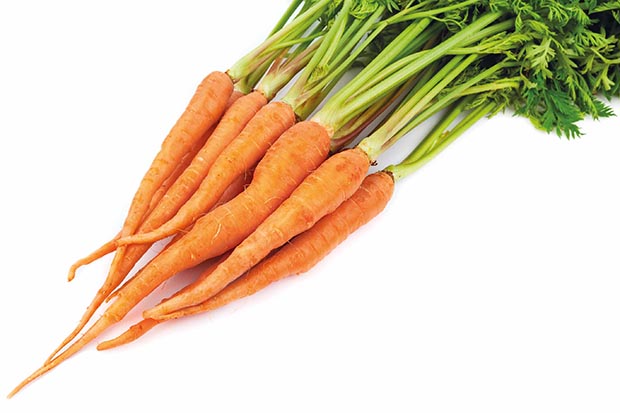 As a teenager raising pigs on our home farm, I was told carrots would make a good crop to feed my hungry porkers over winter. I knew they loved them because when they escaped – which was often – they headed straight for the carrot row in the vegetable garden.  So began my carrot journey. Dad allotted me a decent block of pasture. Over a period of weeks, we sprayed it, ploughed it and tilled it into a fine tilth. An old Planet Junior seeder was extracted and I set out to sow. For hours I walked the seeder up and down the long rows, trying to imagine these tiny seeds finding their way through the soil. Daily I peered at the ground, willing them to come up, but all I saw was weeds.

Three long weeks later, the first tiny, strap-like carrot seed leaves emerged. They were not ready for the hostile weed takeover which quickly lead to the next job… a quarter acre of tiny vulnerable seedlings had to be weeded and thinned – BY HAND! My long-suffering family was roped into this back-breaking, tedious job. Extra push hoes were sharpened up, and various bribes administered. The sun, so delightful when lying on our backs in the swimming pool, turned into a fire demon, cooking our sweat-soaked arms and legs. I learnt more about growing carrots than I ever wanted to!

The following winter we switched to fodder beet for easier cultivation and I didn’t grow carrots in my garden again for nearly 50 years. Apart from one of my university friends turning yellow from drinking too much carrot juice, my next carrot encounter was nearly 35 years later when I learnt that juiced carrots were a potent brew in fighting cancer. I went on an epic juice journey, juicing bucketfuls of carrots, beetroot, apples, garlic and parsley all through my cancer recovery and the chronic fatigue which followed. To what degree the carrots assisted in healing, along with everything else I did, I don’t know. But I grew to love the juice and felt energised when drinking it. Today, cancer-free, I still juice for an energy boost.

Where carrots really shine is in their beta-carotene, which is what gives them their orange colouring. Beta-carotene is converted in the body to Vitamin A, which is essential for cognitive function, eye and skin health and has been implicated as a cancer protectant and immune enhancer. A half cup serving of carrots provides over double the daily adult Vitamin A requirement. 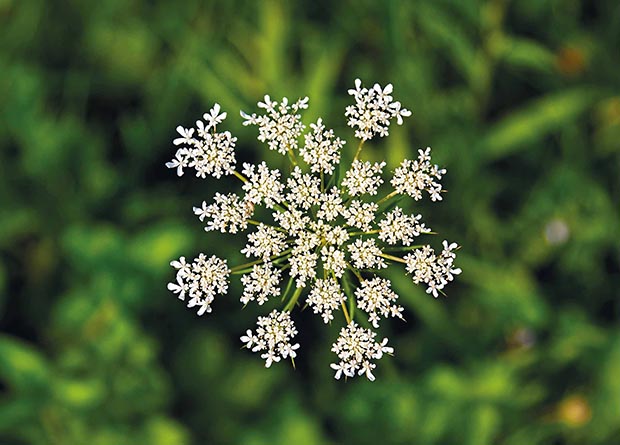 The seeds and roots of wild carrot, a common weed known as Queen Anne’s lace or birdsnest weed, was used by the ancients medicinally. Dioscorides in 512 AD wrote:
“Ye root ye thickness of a finger, a span long, sweet-smelling, edible being sodden [boiled]. Of this ye seed being drank…and it is good for ye [painful discharge of urine] in potions, and for ye bitings and strokes of venomous beasts;… It cooperates also to conception, and it also being [diuretic], both provoketh [poison], and being applied; but the leaves being beaten small with honey, and laid on, doth cleanse rapidly spreading destructive ulceration of soft tissues.” Source: Mitch, 1998. The root of wild carrot is slender and spindle-shaped, whitish and hard, with an acrid taste. Wild carrot seeds found in campsites in southern Germany and Switzerland, and dated as early as 2500 BC, are thought to have been used for medicine and flavouring.

IS IT WORTH THE EFFORT?

You can work without pesticides and there is nothing like fresh home-grown carrots, not to mention the fascinating varieties which cannot be found, from yellow, white and purple, to dark orange and nearly red. Kings Seeds stock a 1000-year old heirloom variety ‘Purple Dragon’ which is reddish-purple with an orange-yellow interior. If you have heavy or shallow soils, or for early and late sowings, stumpy smaller-rooted varieties such as Early Chantenay and Paris Market are a good option. It is likely that in the future we will see varieties with higher carotene values, darker root colouring and pest and disease resistance (as pesticide use becomes more limited), using genetic material from Asian and European carrots. A wild relative of carrot for North Africa, Daucus capillifolius, has already been used to breed a carrot fly-resistant cultivar called Flyaway.

In New Zealand, research on carrots by the Heritage Food Crops Research Trust in Whanganui is only in its early stages. Director Mark Christensen says they are interested in the pre-orange varieties. “What the original carrots – prior to Dutch breeding – looked like and contained.” In hindsight, carrots were probably not the best winter supplement for my pigs – as they are relatively low in calories and fat. One medium carrot contains only 25 calories and 0.15g of fat, terrific for those on a diet but not so great for hungry porkers.

THE COLOURFUL HISTORY OF CARROTS The wild ancestors of our modern day carrot were purple and yellow, not orange. They most likely came from the dry, hot lands of Persia (modern day  Iran) and are still popular there. Seeds of these Asiatic/Eastern or anthocyanin carrots (anthocyanin pigments producing the purple colour) were brought west by the Arabs around the 10th century AD. The western or carotene carrot was first described in Iran and northern Arabia in the 10th century and is thought to have developed from yellow mutants of the purple carrot. In Persia purple carrots were preferred for flavour, despite staining cooking utensils. Europe however, preferred the ‘more refined’ yellow carrots. Orange carrots first appeared in Spain in the 1500s followed by France, Germany, and eventually Holland in the 1600s.

There is no clear evidence for carrots being used as a root crop before the 10th century. Unravelling this mystery is not helped by classical and medieval writing which often confused carrots with parsnips, referring to them both as pastinacea, parsnip’s generic name. Exactly when carotene carrots first appeared is also unclear. Before them carrots and parsnips looked very similar, both being thin and woody and rather yellow (sometimes referred to as white). The name Daucus was first added to distinguish carrot from parsnip by Galen in the 2nd century AD, but it was not until 1753 that the Swedish botanist, Linnaeus (in Species Plantarum) formally separated the two species: Daucus carota (carrot) and Pastinacea sativa (parsnip).

What is known is that the long, orange Dutch cultivar, the forebear of the orange horn varieties abundant today, was developed by Dutch growers in the 16th century. Some historians have suggested the orange carrot was bred to honour William of Orange, but it’s more likely it was bred for its superior taste, sweetness, reduced woody core and attractive orange colour. Whatever its genesis, during the rise and fall of the House of Orange the carrot became a bit of a political football. Patriots revolting against the house declared that orange was “the colour of sedition…carrots sold with their roots too conspicuously showing were deemed provocative.” How you would sell carrots without their roots showing provocatively? 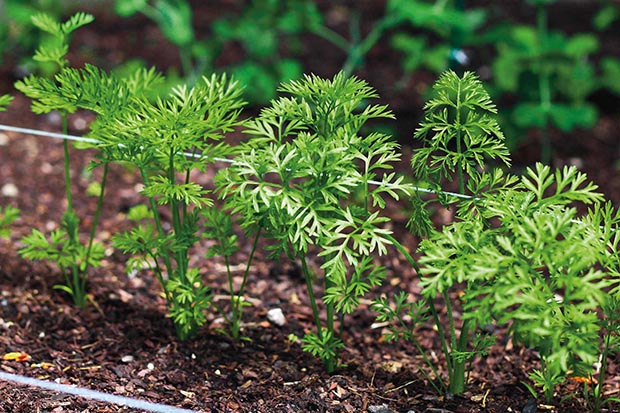 Are carrots really hard to grow? Some say yes, others say no, but here’s what my trial by carrots has taught me.

• Carrots are a cool season crop with optimum growth between 15-25°C.

• Like other tap-rooted plants, they do best in full sun in a free-draining soil, especially if they are to overwinter.

• Soil is best if prepared some months in advance – fresh manures can produce misshapen roots.

• Conventional long carrots need a deeply dug soil that allows their roots to penetrate to their full length without interruption.

• Carrots do not transplant well and are best direct sown into a fine seedbed – sow seeds thinly about 1cm deep in drills 30cm apart and thin to about 5-7cm apart.

• Seed germination is often uneven and early seedling growth is slow. Young thinnings can be used in salads but without thinning, roots will be stunted and woody.

• Carrot rust fly (Psila rosae) can cause stunting, wilting and death of plants especially in warmer areas. Flies are attracted by the smell of bruised leaves so all thinnings should be removed. A light insect mesh is a nuisance to take on and off but will stop flies laying eggs in the soil around plants. Mounding soil around the roots makes it harder for the larvae to reach the roots and also prevents green shoulders. Organic solutions aiming to confuse the fly’s sense of smell include mixing freshly ground coffee in the drill, or spraying onion juice or garlic and chilli sprays. 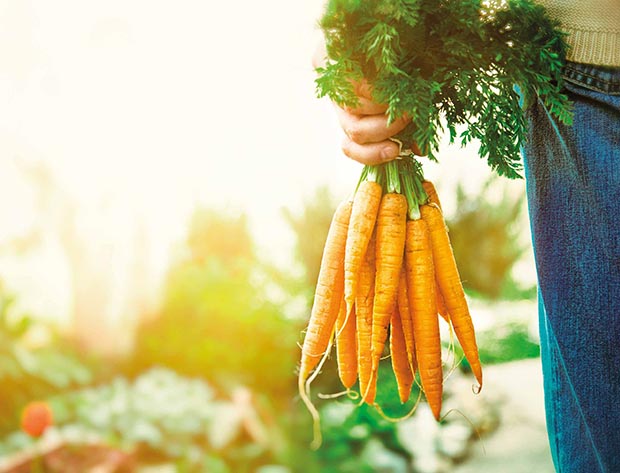 TRUE: the largest carrot ever grown was a whopping 8.6kg, grown by John Evans in Palmer, Alaska.

FALSE: British pilots did not increase their night vision in WW11 by eating massive quantities of carrots – this was a myth spread to cover up the significant advancements made by the Allies in radar technology.

TRUE: carrots were extensively promoted for their vitamin A in the United Kingdom during WWII to reduce use of rationed foods. ‘Dr Carrot’, carrying a bag of Vitamin A, promoted carrots for health and revived old recipes for cakes, puddings, jams and even a carrot drink called Carolade. ‘This is a food war. Every extra row of vegetables in allotments saves shipping. The battle on the kitchen front cannot be won without help from the kitchen garden.’

TRUE: in the reign of James I (1603-1625) it was high fashion for ladies to wear carrot leaves in their head-dresses.

TRUE: massive over consumption of carrots can result in orange skin as Vitamin A is fat soluble and will store in the body.

CARROTS IN THE KITCHEN: 5 DELICIOUS IDEAS • Use extra carrot juice instead of water or chicken broth to cook grains such as barley, couscous, quinoa or when steaming fish or chicken.

• Serve cooked carrots with parsley sauce, hollandaise or cheese sauce, or serve with
a little lemon juice and butter and chopped fresh herbs such as chervil, dill, marjoram, mint and parsley.

You can use any kind of kale for this dish, preferably of different types and colours. I used Cavolo Nero and Squire, and as I had no red kale, I used the leaves and stalks
of beetroot instead. Serves 4.