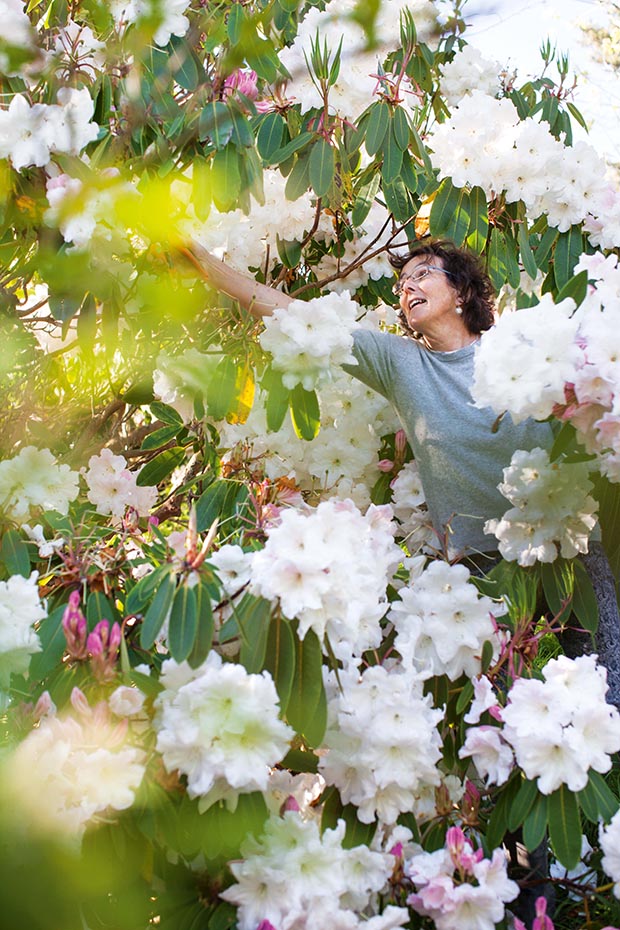 Peter Cooke and Anna Moore are turning a lifetime’s commitment to organic gardening and sustainable living into a retirement income.

Anna Moore is remarkably calm for a woman just chased from Hoopers Inlet by a sea lion. Making her way back to shore after an afternoon swim, she had to pick up her pace when she noticed it cruising at her heels. Sea lions and penguins are common in the waters of Hoopers Inlet on the Otago Peninsula where Anna and her general practitioner husband Peter Cooke have created the astonishingly beautiful Hereweka Garden. And staying calm under any circumstances comes naturally to Anna. Her work as a psychotherapist demands it. 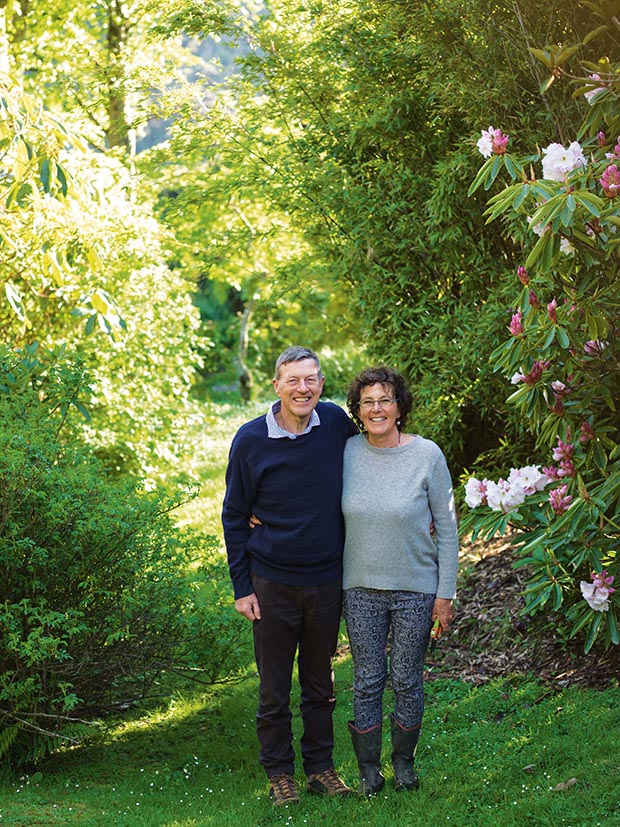 Even when they’re not working in the garden, Anna and Peter walk the paths most days

Somehow, Peter and Anna have managed to maintain their careers in the health sector, raise four children and transform four and a half hectares of solid clay ridges and gullies into a lush and verdant destination.

“Even after 35 years here we still wake up, look out the window and are thrilled by what we see in the garden,” says Anna.

“Something amazing is on display every day. It might be seeing the change in the colour of a particular plant or the arrival of certain native birds. We both work three days a week at our respective careers, but Peter might spend time in the plant nursery before driving to his practice in Portobello and every week I’ll pick flowers to take to my workplace in Dunedin. We get out into the garden almost every day.” 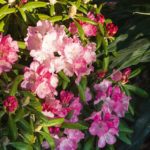 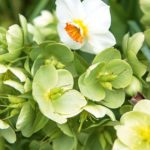 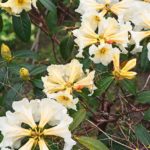 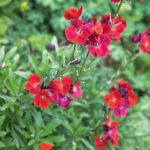 Gardening enthusiasts have been visiting for two decades and more, but since Peter and Anna added an eco-cottage in 2012, it has become a destination for honeymooners, couples celebrating significant anniversaries, and international travelers in search of something distinctly “New Zealand”. The cottage will give Anna and Peter the means to employ a gardener when, in their great old age, they are no longer able to maintain the property themselves. But at this stage it is still gardening – specifically organic – and sustainable living that are central to their lives.

They fell in love (in gumboots and damp homespun jerseys) on a visit to a community vegetable plot at the University of Otago in the early 1970s, and married in 1976. Peter was a newcomer to the good life, while Anna had grown up with organics. Her grandfather developed the first wholemeal bread in Dunedin, and had it made by Frew’s Bakery and sold as Doctor Moore’s Bread. 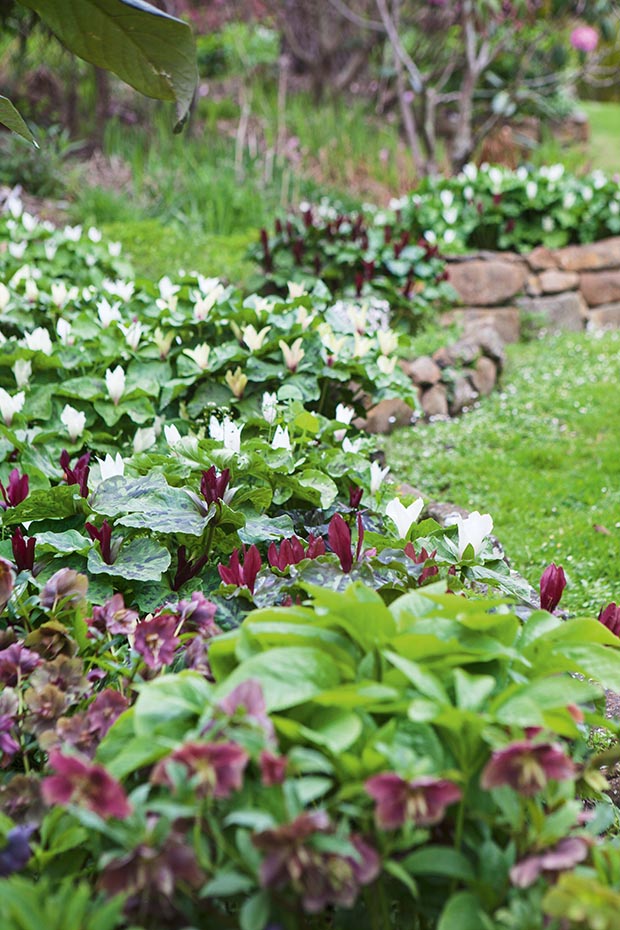 “For the first few years of our married life we lived at Kakanui near Oamaru and were enthralled by the rich black soil there,” says Anna. But Dunedin was the couple’s turf, and there was never any question that they would make their lives close to the southern city. In the early 1980s, they bought the land at Hoopers Inlet, half an hour’s drive from Dunedin’s Octagon, and started developing an impressive vegetable garden, orchard and hen run on the ridge at the back of the site.

“Hauling barrow-loads of organic matter to build the top soil was the hardest part of the work we did, and we’re glad we don’t have to do that anymore,” says Peter. But it had to be done before they could enjoy the thrill of creating the drifts and forests, dells, borders and vegetable plots while running a modest commercial plant nursery and enjoying their day jobs. 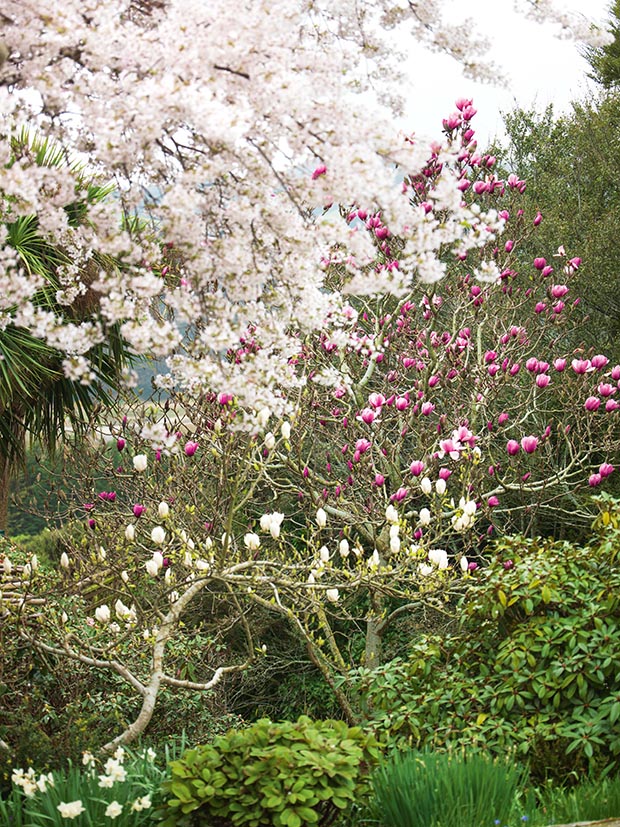 A delicate white magnolia ‘Lonnei Alba’ and her sister, the pink magnolia ‘Serene’ take a bow before the magnificent Prunus yedoensis

“In the early days, we were working in broad brush strokes and creating fabulous canvasses,” says Anna. “Nowadays we’re maintaining the garden, and it’s as if we are working with a fine brush.” Their favourite tools for maintenance work are always close to hand.

Says Anna: “One of my favourites is the Japanese hori-hori, a trowel that has a serrated edge and deals to tap roots like dandelion and dock. We bought two back from Japan. The other is the silky saw, also from Japan. They range from pocket-size for pruning roses to large tree pruners and all sizes in between.” 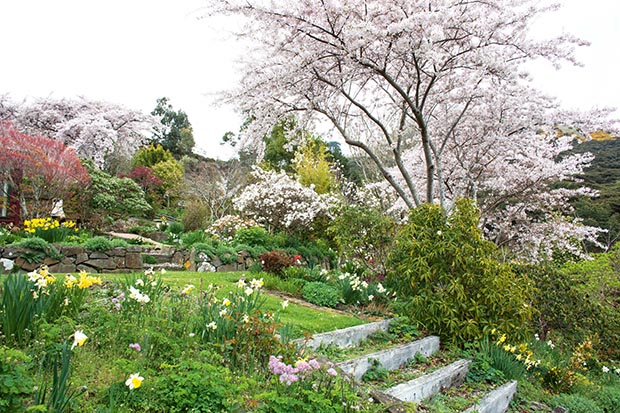 Anna delights in fragrance and subtle hues in the garden. She has planted a spring display of flowering cherries, magnolias and bulbs on a terrace close to the house

The garden beds are boarded in knee-high dry stone walls and connected by broad grassy paths, all of them built by Peter.

More stories you might like:
Why you should start planning in autumn for next summer's strawberry crop

“The vegetable and orchard areas take up about half an acre in the old parlance,” he says. “We grow species you wouldn’t expect to find in Dunedin – figs, mulberries, citrus, tamarillos and feijoas as well as apples, pears, plums and berries.”

Elsewhere in the garden, Anna has perennial borders and roses, and beautiful trees such as cherries, magnolias, maples and rhododendrons with lavish under-plantings. They invite friends for a spring blossom party every September. She has a dell of hydrangeas in marvellous shapes and colours. There’s one ridge where remnants of the original native forest stand. The 70 rimu trees are the only ones left on the peninsula. And then there’s the Gondwana Valley. Looking down into it from the upper ridge, it is breathtakingly dense, silent and primeval. Enormous tree ferns stand like umbrellas over cold hardy palms, cabbage trees and monkey puzzles.

“Some 80 million years ago, New Zealand was joined up with Africa, South America, Australia and Antarctica. The landmasses separated but there were original plants in all of those countries that now have descendants, and I’ve been planting their seeds,” says Peter. “I began to develop the Gondwana theme about 12 years ago in a little side valley off the garden proper.” As a member of the International Dendrology Society, dedicated to the scientific study of trees and other woody plants, he sources Gondwana seeds from dendrologists in New Zealand and abroad.

Says Anna: “When our boys – we gave them all tree names, Linden, Rowan and Jarrah – were at university they earned money by putting tracks through the garden. Our eldest, Rebecca, helped too but she missed out on a botanical name, so she called her first child Lily.” Peter and Anna’s family, including their eight grandchildren gathered for lunch

The garden is alive with native birds. Bellbirds have always been here, but it took about 18 years of tree planting before the tuis and wood pigeons were seen every day. If they are in luck, visitors may glimpse New Zealand’s smallest bird – the rifleman – but there are also fantails, grey warblers and shining cuckoos. And then there are the wading birds down at the inlet.

Hoopers Inlet is on the dark side of the Otago Peninsula. The lack of light pollution from Dunedin and the absence of nearby houses allow guests to stargaze and observe the splendour of the Aurora Australis on an evening’s stroll to the inlet, just minutes from Hereweka Garden. A NEW LEAF
At a time when manufacturers of everything from soap powder to cars claim their products are environmentally friendly, how much eco-cred is there in the cottage at Hereweka Garden Retreat?

Peter’s eyes twinkle. “Here’s the list: wool insulation in the walls, ceiling and floor. Other than the required tanalised piles, we used only sustainable wood – often larch and macrocarpa. For the kitchen joinery, we used hoop pine – one of the Gondwana plants. And we sourced a sophisticated composting flush toilet from Sweden.”

Anna has her list: “We have solar hot water with a gas boost. I found organic wool fabric for the sofa and all the furniture is New Zealand-made and bought at Thonet in Wellington.

“The dining chairs are recycled plastic. We have a beautiful set of vintage crockery. I pick up linen tea towels second-hand.

“All of our cleaning products are organic. The flooring is recycled wood, the curtains are cotton, and the bedding is cotton and linen.

“We provide an organic breakfast tray where everything possible is homemade and organic: low-gluten bread, kasundi (a type of tomato chutney) with our own tomatoes and garlic. I make all my jams with organic sugar and fruit. We have honey from the hives on our property and offer organic muesli, tea, milk and coffee. And we recycle everything our guests throw away.” IN THE CLUB(S)
Says Anna: “A group of local people get together every month or two for Cook Club. We’re all into organics, so we cook delicious, seasonal, organic food. Sometimes we cook together, sometimes separately and bring the food to the host’s home for a dinner party. Then there’s the Cuisine Club where one person is the host and cooks the main dish while everyone else cooks around it.

In both clubs, we prepare the most gorgeous food.

“When Cuisine magazine comes out every two months, everyone cooks recipes from that issue. There are four couples in the Cook Club and five in Cuisine. We also have a knitting club on a Sunday, and we go for a walk and the host makes something delicious for our afternoon tea.

“We walked the Milford Track together a while ago and it nearly killed us.”