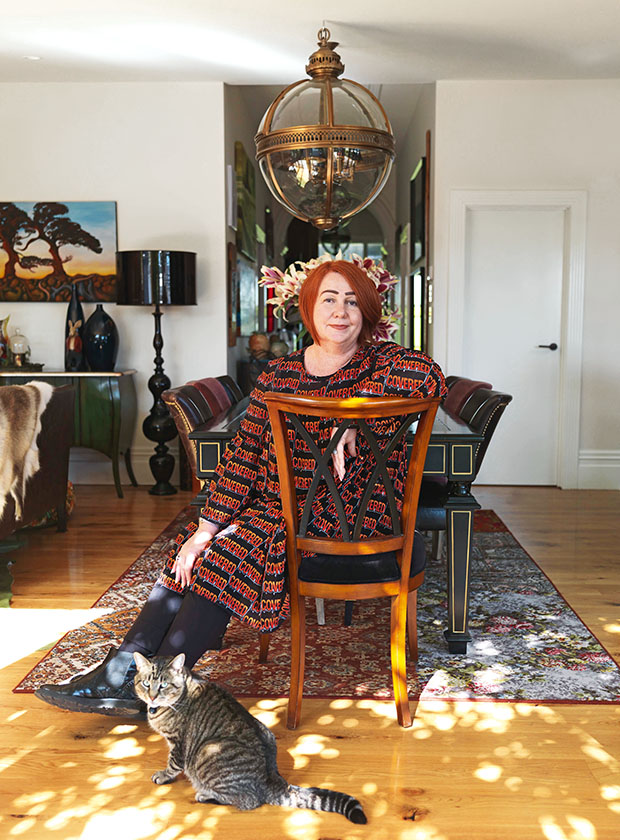 When the owners of an earthquake-wrecked home were told it was a lost cause, they knew it wasn’t.

There’s a line of thriving fruit trees along the boundary fence of Diane Shaskey and Jaemie McCleary’s front garden. You’d never guess they were once marked for the axe just like the house they belong to. That both house and trees are looking better than ever is testament to their owners’ determination and strength.

“We were never going to give up on this house,” Diane says. “I’m not sure whether people would describe us as resilient. Perhaps it’s more that we are just plain stubborn, and maybe a little headstrong. 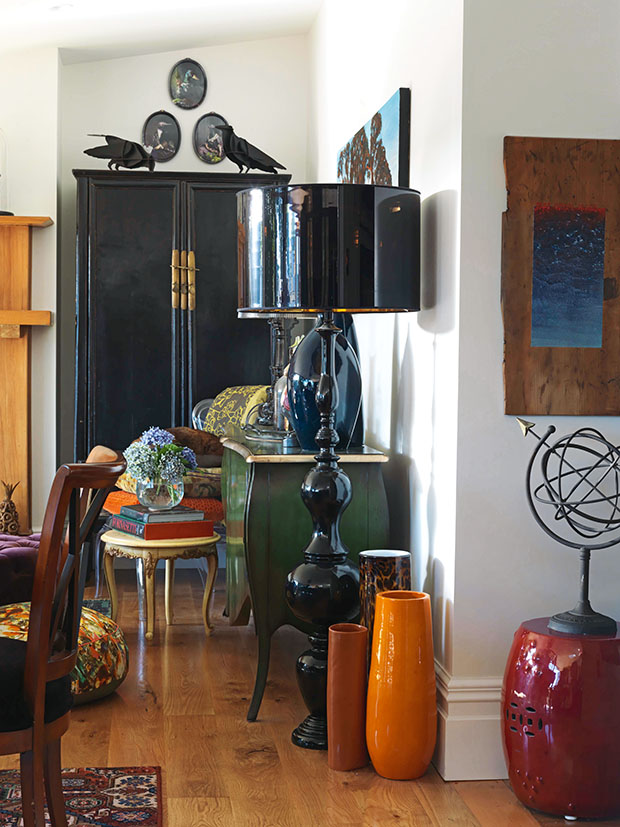 Diane set about collecting treasures to decorate her finished villa with- and stashing them in a shipping container in their garden.

“If everybody gave up on character homes because they were uneconomic to repair there would be no historical neighbourhoods and cities would lack character. I am very committed to sustainability, and demolishing a home for financial reasons alone was never going to sit well with me.”

The story of the couple’s relationship with their 111-year-old villa starts in 2004. Diane, the national technical manager for Matrix hair products, had decided it was time to return to her native Canterbury after 15 years’ living in Auckland and Australia. She and Jaemie, an Australian, fell in love with the Linwood house the moment they saw it even though it had been a rental property for many years and had a horrendous colour scheme. 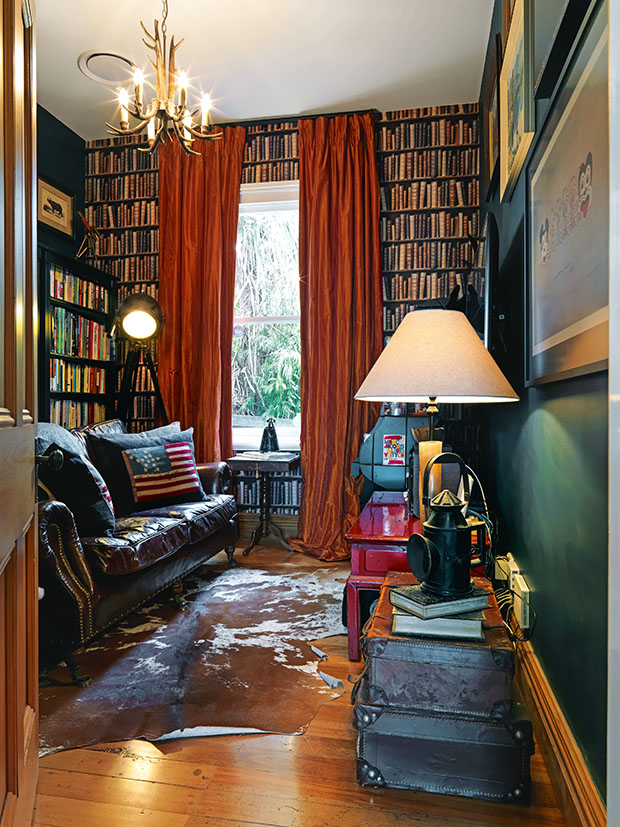 A tiny third bedroom has been transformed into a library and media room.

“The house ticked all our boxes. It was a character home in an inner-city suburb, close to Sumner beach and the Port Hills,” Diane says.

“The same family had owned it for several generations; it still had great bones and many of its original features, like the plaster arch in the hallway, three-metre ceilings and the fireplaces in the bedrooms.”

So they moved in and set about replacing rotten weatherboards, floorboards and sash windows, updating lights and painting the rooms in neutral tones. They planted fruit trees and roses to create a sheltered and private garden. They were adopted by a series of cats, four of which became permanent family members. Life was good. Then the unthinkable happened. Diane was at home on 22 February 2011 when Christchurch was ripped apart by a 6.3 earthquake in which 185 people were killed. The scullery cupboards hold dozens of Clarice Cliff and Royal Doulton that Diane found on Trade Me to replace the original collection she lost in the earthquake.

“The sound was deafening, lath and plaster walls and ceilings were cracked and pieces were falling to the floor, windows were shattering and all the china and glass in the house was destroyed in minutes,” Diane says.

More stories you might like:
Ellis Emmett on conquering mountains, underwater explorations and life in a treehouse

“I heard the chimney come down onto the roof and then the crash as it hit the side path below. I remember thinking to myself that standing in front of the bathroom mirror, holding on to the architrave of the double sash window, was perhaps unwise.” “We weren’t abandoning the old girl for anything.”

One glass and half a bottle of pinot noir had survived the carnage in the kitchen. Diane poured herself a glass of wine, righted an outdoor chair on the back lawn and sat in the drizzle waiting for Jaemie to get home. When he did four hours later, he retrieved their camping gear from the collapsed garage and they set up inside. The floor levels had dipped in places, the roof was damaged and the ceiling had partially come down in two rooms. They had no water or electricity for a fortnight and had to set up a makeshift toilet in the back garden.

Still, they knew they’d got off lightly compared with so many others. “Optimistically, I thought, ‘well, it’s all fixable’,” Diane says. “Being oblivious to structural engineering renders you blissfully unaware of the actual process. 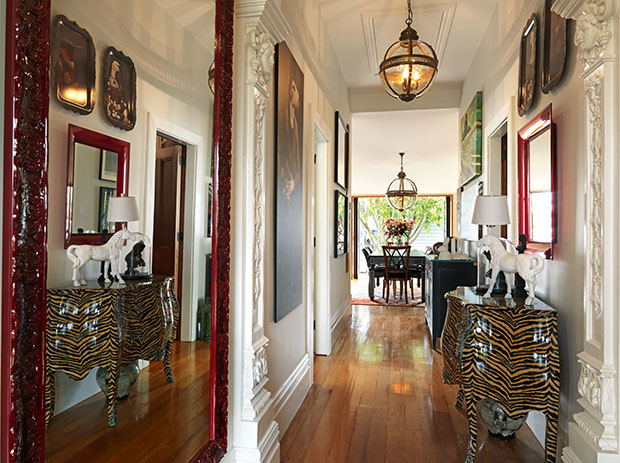 During the villa’s reconstruction, the builders were planning to lower the three-metre ceilings until Diane and Jaemie intervened. The lofty stud was retained, and the couple got the builders to strengthen the ceilings and create a loft space for extra storage.

“The initial first-response assessor allowed us a yellow sticker (broken not potentially deadly) if we promised to stay out of the bedrooms that had unstable double-brick chimneys in them. We weren’t abandoning the old girl for anything. She had looked after us despite being broken and we weren’t leaving her behind to fend for herself.”

They continued to live in the house for several years, through 16 assessments by various experts. Like many in Christchurch, Diane and Jaemie could write a book about the assessment process and the protracted battle they went through to save their home. When assessors said it was “uneconomic to repair” and that they would be better off building a small, modern home, the couple were stunned.

“When they sent through the letter saying please sign your demolition order I was devastated,” Diane says. “But the good thing about that was that it made us realize how strongly we felt and what we had to do.” 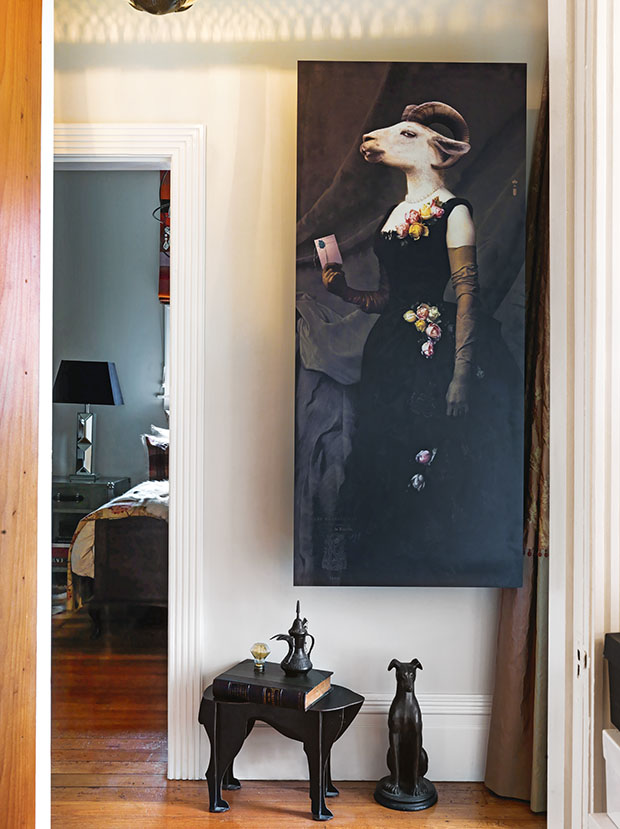 Diane and Jaemie invested in an ingenious cupboard, disguised as a painting, by French designers ibride.

The couple eventually negotiated a settlement with the aid of an insurance specialist, thankful to avoid the courts. “It would have made far more sense, both financially and emotionally, to have thrown in the towel and given up,” Diane says. “Many people suggested we should consign the house to demolition, then sell the new build and buy a villa elsewhere. But everything we loved about the house and the neighbourhood were still essentially there – just broken – so we were staying.” 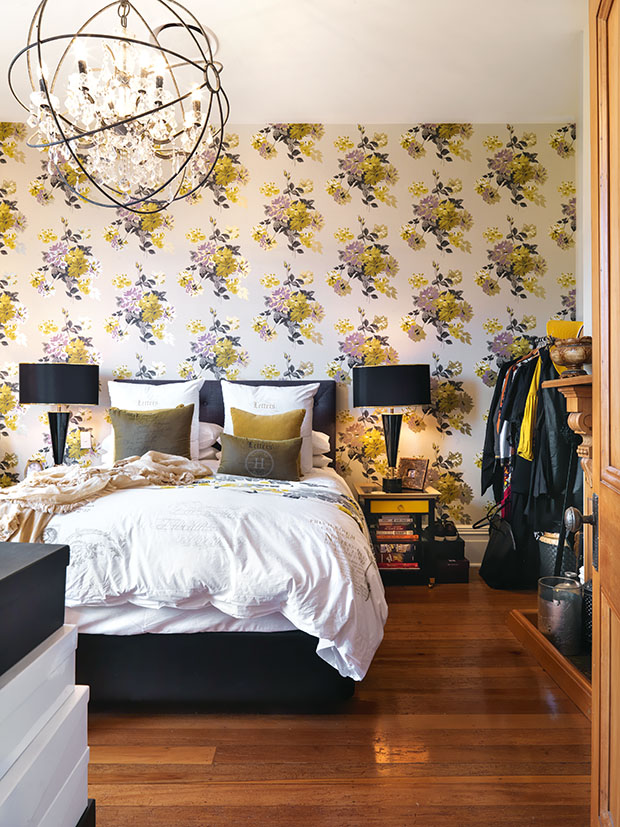 Diane and Jamie could write a book about the assessment process.

Once they had the green light, the resurrection of their home still took a long time – and cost a lot of their own money. They decided to rebuild the garage first so they could live onsite and keep some semblance of normality. Making the garage habitable took five months, and then the house itself took another nine months to complete.

“The garage was fantastic, we loved it,” Diane says. “We put in a full bathroom, a laundry, a heat pump and it was all insulated. It was a bit of a trade-off, but not having to relocate the cats meant we didn’t have to worry about losing them. We could just go about our life. We got to know our builders very well, and it helped being onsite because they had lots of questions.” Diane began sourcing fabrics and furniture and other key bits for the finished house.

Diane says she knew exactly what the rebuilt house was going to look like. Unbeknown to Jaemie – a man clever enough to recognize his partner’s talents and turn a blind eye when necessary – she had begun sourcing fabrics, furniture and other key bits and pieces for the finished house long before it was ready. She stashed everything in a container in the garden, along with many other treasures.

“I think it comes from my grandmother,” Diane says. “My mother said she would be highly embarrassed because her friends would always spot Phyllis, her mother-in-law, running to whatever fabric sale was on. It’s skipped a generation and I have the gene. Bargain shopping is my favourite sport.” Diane set about collecting treasures while waiting for the resurrection of the villa.

Now, six years after the earthquake, “the old girl” has never looked better. Diane and Jaemie’s resilience has played a big part, but so has Diane’s extremely skilled eye. An extension off the back of the house has given them an expansive open-plan kitchen and living space that opens onto a northwest-facing deck. The house is alive with colour, texture, gorgeous light fittings and art, including pieces on recycled and reclaimed native timber painted by their builder Manuel Brown.

A hallway cupboard by French designers ibride takes care of shoes and coats; a small third bedroom has become a cosy library and place to watch television. The opulently decorated master bedroom is flooded with morning sun and filled with furniture and objets d’art. The scullery cupboards hold dozens of pieces of Clarice Cliff and Royal Doulton that Diane found on Trade Me to replace the original collection she lost in the earthquake.

The complete restoration is not totally finished – while they managed to save and replant the fruit trees that an arborist said would never survive, the rest of the property needs landscaping and there are a few other bits and pieces that Diane has her eye on. But they are happy.

“Without even adding up every single invoice I can confirm that our insurance provider was indeed 100 per cent correct – it was most definitely uneconomic to repair,” Diane says. “But we are absolutely delighted with the end result and I am 100 per cent sure we did the right thing for us, even if we did end up spending $500,000 on a house valued at $325,000 when we began the process.

“Now we have to take a breath, recoup and start again outside,” Diane says. “But it’s such a haven in here now when you come home. We’ve always been so happy in this house. I think she’ll be good now for another 100 to 200 years.” Diane found the striking globe lantern that hangs over the dining table at ECC.

✱ Marcel Wanders is my interior designer hero – I love his creativity and style.

✱ Matthew Williamson, for his innate sense of the quirky, his use of colour and his beautiful fabrics.

✱ Grace Coddington, for her style and tenacity – plus she loves cats.

✱ Vivienne Westwood, for her outspoken campaign for a sustainable world.

✱ ibride, two French designers who make interior pieces that are fun and unique.

✱ Iris Apfel, for making it cool to be outrageously excessive with both colour and texture simultaneously. ✱ My favourite for inspiration, furniture and lighting is ECC in Auckland, while Ballantynes is the hands-down favourite in Christchurch.

✱ Plume (Christchurch) is my ultimate go-to for clothing.

✱ We love daytime eaterie Under the Red Verandah in Linwood – amazing, resilient people who rebuilt their business and looked after their staff throughout the quake. It’s an asset to
the neighbourhood.

✱ Our favourite bakery is Vic’s Bakehouse in Ferrymead – the best cheese and onion bagels and organic sourdough ever. SHAKY CATS
“Our three rescued cats most likely believe that they rescued us rather than the other way around,” says Diane. “There is some truth in that, as they came to our house and moved in of their own accord. We felt it would be another blow in their lives to move out and try and relocate them while the repairs were underway. They all suffered quite significantly in the quakes.

“One cat, Mr Splitty, was so traumatized he ran away constantly to live in the foundations of a local school where he felt safe and we had to keep retrieving him after every major aftershock. Pip, our tiny female cat, was under a bed in the quake and she was only saved from being crushed by a rolled-up carpet under there with her. We had to push her food and water bowl under the bed for days as she refused to come out following the main event. She was prescribed cat Prozac for anxiety but it made her so chilled out that she kept falling over, so we dispensed with the drugs and focused on giving her a stable bolthole to live in.”