The Southland wedding venue with a difference: Take a peek at Tussock Creek’s teeny tiny fairy village and restored Church 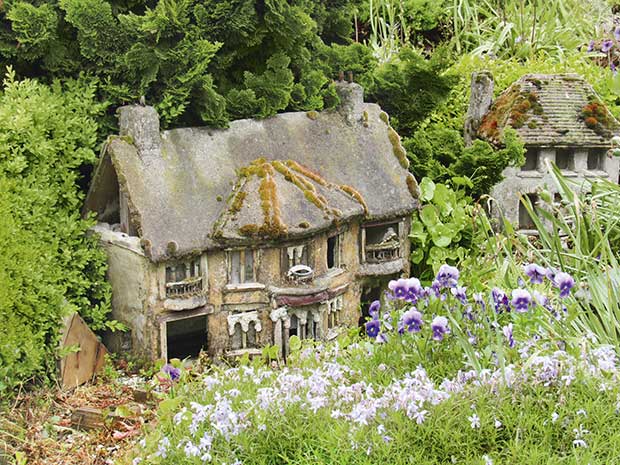 It takes a village to create a thriving business for one Southland couple. Or in this case, several very small villages, a railway, and a real church.

When you get to the Royal Creek intersection, turn right and you’ll find fairy land. Annie and Linc Evans’ lifestyle block looks fairly normal at first glance. There’s the pleasant background of bird song and the occasional bleating of a sheep. You can meet Polly the pig, Creamy the pony, and Little One, the dusty donkey who just loves a scratch inside his ears. There are also alpaca and cattle. There’s a clue that this is no ordinary farm when you spot an idyllic country church on the lawn, complete with steeple, belfry, and a bell you can ring yourself.

But it’s Annie’s garden that is outside the mainstream. And also quite little. About fairy size. 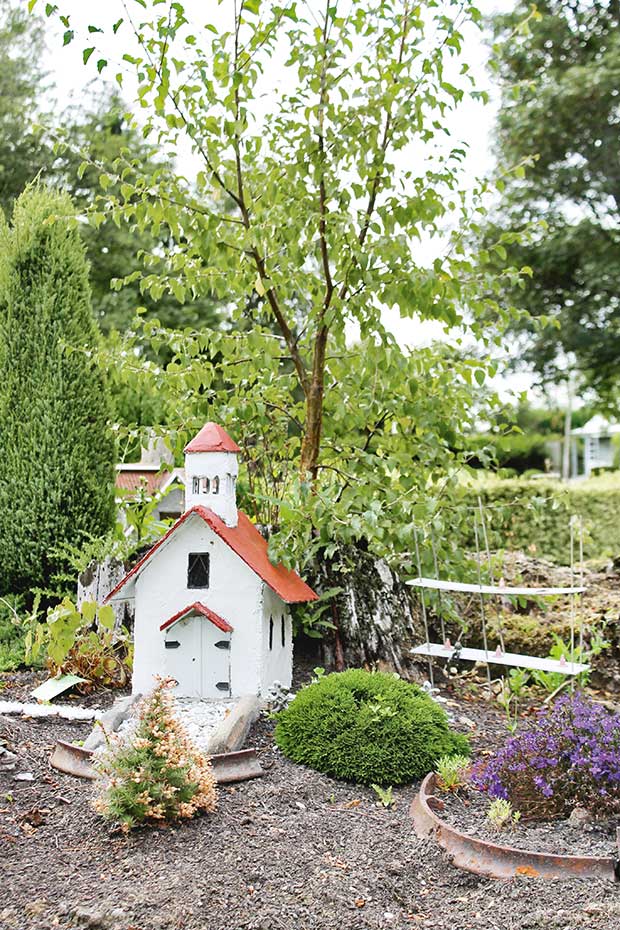 There’s always room for one more church, especially one this small.

Over the past 25-odd years, Annie has created a landscape of miniature English villages set in a park-like garden. She’s done it all herself, by hand. Linc is there to assist when the garden outgrows its borders, his work usually involving a tractor, the front-end loader and a chainsaw. When you visit, you’ll find Annie in the garden. “I remember, as a child, going on a family holiday and stopping for a break beside a house with a painted lighthouse in its front yard. It sat on the edge of a blue fish pond. While my father took out his tobacco pouch and rolled a cigarette, I sat and gazed at this miniature ocean scene. It must have stayed in my mind because I always dreamed of creating my own small-scale world.” When their children left home, Annie’s architectural plans came to life. “I built my first little house in 1989. It was a simple miner’s cottage made of wood.” It took her a few years to create the first village. As her skill level increased, she garnered inspiration from travels abroad (she adores the Cotswolds), magazines and internet. The buildings became increasingly varied and their settings more established. 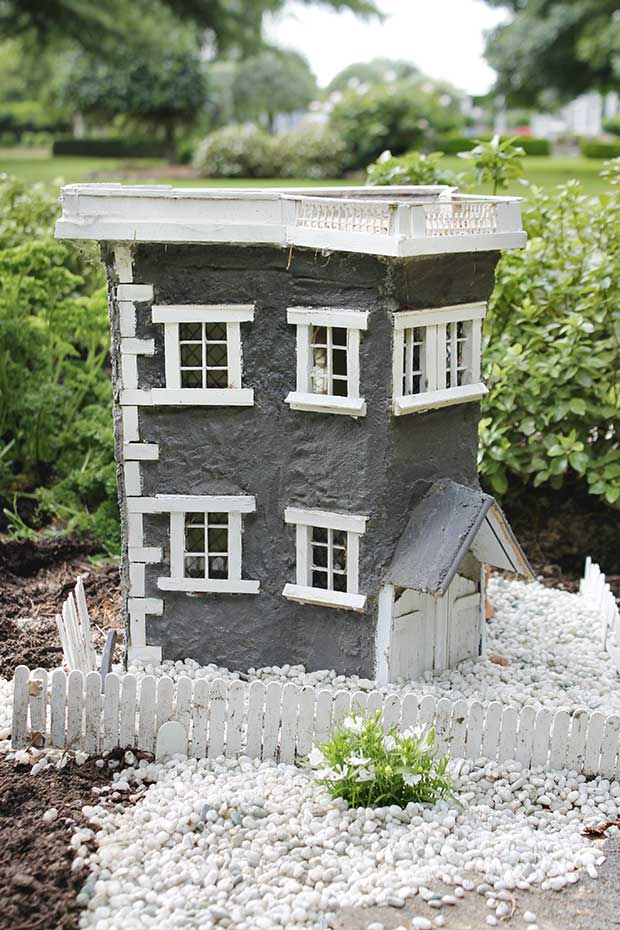 Plants are chosen carefully to help with scale.

Now, a series of little settlements are dotted around the expansive garden on the couple’s 5ha block. There’s everything from country cottages to grand manor houses and a working railway. “All miniature villages have railway stations so I knew I would eventually build one,” says Annie. “But when I sought advice about what sort of train to get, I was so shocked to find an electric model would cost $3000-$5000. Simpler trains weren’t available. In the end, we found an inexpensive model (and spares) on Trade Me.” To the delight of Annie and Linc’s grandsons, who live next door, the train chugs cheerfully around its circuit, past an angelica copse, over a railway viaduct (supported by picture frame stands which mimic a bridge’s framework), and past a parsley forest. When you have to think small, you need to have an eye for everyday objects that can be re-purposed. Popsicle sticks painted white become picket fences. Details from a light-switch cover add decoration to an ornamental window frame on a cottage. The railway is very popular with people and its mini residents.

You also need to choose just the right plants to keep the perfect scale. Annie admits she’s not a passionate gardener, but she is interested in the way plants contribute to the overall design and setting of her villages. Her favourites include violas, saxifrage, and blue and white lobelia for their tiny blooms; perfect for a miniature garden as they don’t get big enough to overwhelm the buildings. Dwarf conifers and tightly trimmed pittosporum also contribute to the diminutive nature of the setting. Like any property manager, Annie is kept busy attending to repairs in the off-season (May to October), removing moss, and clipping and snipping foliage.  In summer she’s busy playing host to bus loads of visitors who come to enjoy her fantasy landscapes, from classes of school children to rural groups, garden clubs, rest home residents, car enthusiasts, and happy picnickers. 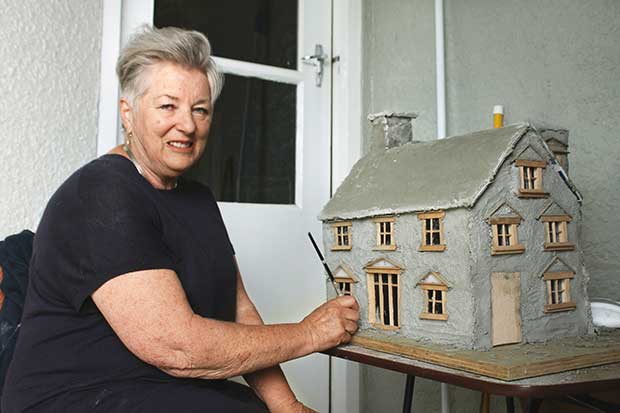 HOW TO BUILD A HOUSE FOR A FAIRY 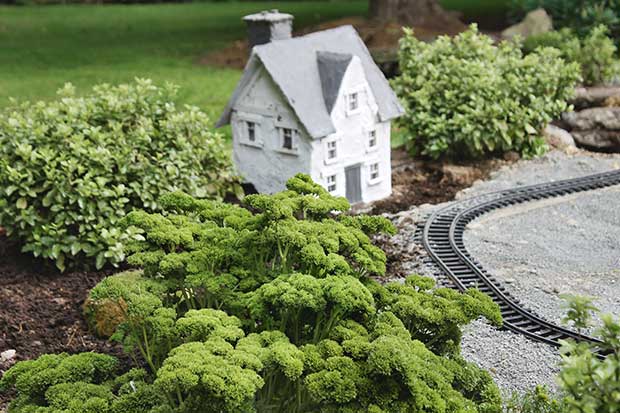 Over the years, Annie’s construction methods have evolved from the old to the new. Her first buildings were made out of tanalised plywood. Now it’s modern, light-weight, fluted plastic board, the kind used in real estate signs. Once the basic shape is held together, she applies plaster to the exterior, spraying it regularly during its drying process to prevent cracking. She sandpapers it to create the desired finish, then tops it with a coat of lacquer to help protect the exterior from the weather. 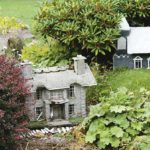 The original homes were made of plywood, now it’s plastic fluted sheets. 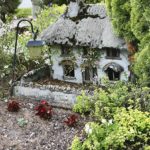 Annie is inspired by travels to the Cotswolds. 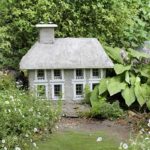 Maintenance is required all year round. 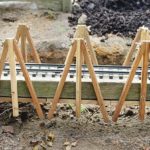 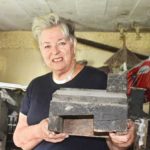 Annie in her workshop. 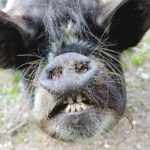 More stories you might like:
The Kindness Institute's Kristina Cavit on teaching mindfulness and yoga to vulnerable New Zealand teens

Construction of a building is on ongoing process which she likens to knitting; it can be picked up and put down as time allows. Each one takes 3-4 weeks to complete. When the garden opens to visitors every October, Annie usually has at least three new additions for people to see. Her miniature world provides a great deal of personal pleasure. Annie says she especially enjoys walking around them in the evening light. But more than that, she delights in watching others enjoy them. “I love giving people pleasure, and the villages can sometimes take people away from their everyday troubles, even if it’s just for a little while. I remember watching a couple of visitors who had come to the garden as a break from sitting with a dying relative at the hospice. I could see them relaxing as they looked at the little houses. That made me very happy.”

THE CHURCH AT THE BOTTOM OF THE GARDEN 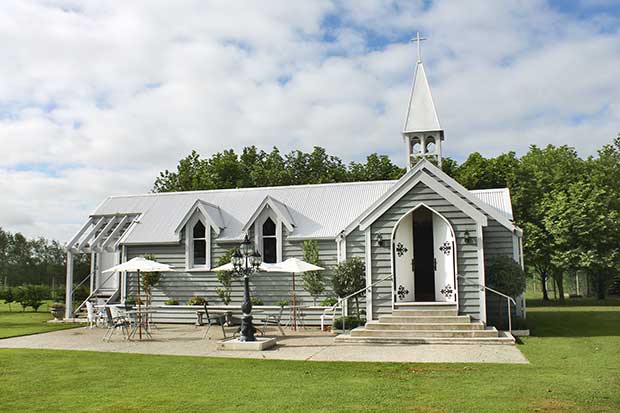 An old church from Timaru has been reborn in Annie Evans’ garden.

There’s one small building on Annie and Linc’s block that everyone loves, but unlike the rest, this one is big enough for a life-size wedding. Annie had always dreamed of relocating a church to their block. When the right one finally came along, Linc moved the fence to make space for it. “Our son Jason (a builder) was working up Cromwell way and he phoned us one day to say he’d been to look at a church that was sitting out in a paddock, not being used. We went to look at it and everything fell into place.” The church in Annie’s garden has been moved twice in its lifetime and is originally from Timaru. The inside is lined with macrocarpa which gives it a warm honey-glow. The pews from the now-deconsecrated Dipton church seats 65, but additional seating can take the total inside to 110 people.

The number of weddings they’ve hosted is now into double figures. Most have gone off without a hitch, but one memorable day, an important member of the bridal party went missing. “Usually, while the guests are assembling and everyone is waiting for the bride to arrive, the celebrant, the photographer and I will sit out under a tree and have a quiet chat,” says Annie. “But on this particular day, it was just the photographer and I – I thought the celebrant must already be in the church.  “However, when the bride arrived at the altar a little later on her father’s arm, there was no celebrant! The MC simply announced that everyone would go outside and that the bar would open until the matter was sorted. Well, it was a very hot day and you should have seen how quickly the church was cleared.” The celebrant had been held up by a road block from a car accident, in the one spot where there was no mobile phone coverage. “The bride’s father was quite happy about it all because, as he said, it’s not often you get to walk your daughter down the aisle twice!” There is space on the lawn for a marquee to be set up outside the church. Wedding parties often enjoy drinks and nibbles following the ceremony but Annie and Linc are considering building a permanent structure.

“You can’t guarantee the weather,” says Annie. “At the moment, if it’s raining, visitors to the garden can always come into the church for a cuppa and to eat their lunch, but it would be more comfortable for them if there was something like a little hall to gather in. That way they could come and go more freely between showers.” There are now 45 buildings dotted around the property. You spend so much time with your head down, absorbing Annie’s work, it’s not until you look up from your wandering that you find you are surrounded by magnificent, mature trees. 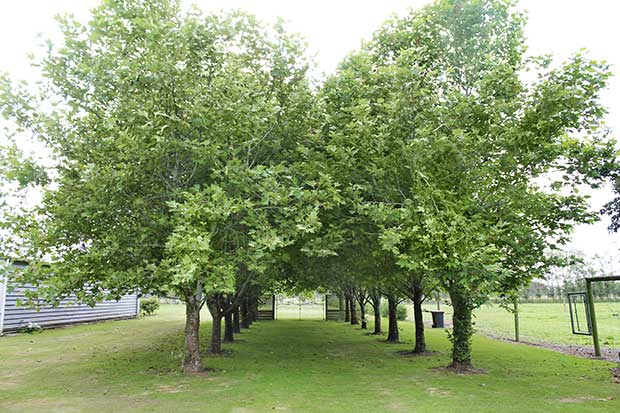 The garden is also designed with wedding photographs in mind.

A towering monkey puzzle, planted 38 years ago by Annie and Linc when they first moved to their block, is enchanting. There’s an avenue of silver pears, perfectly trimmed, and fringed by
a neat buxus hedge, and a collection of golden pencil cypress. “I planted these ones a few years ago. We have weddings here and the bride often has her photo taken under them. Their leaves are so big although they don’t appear until quite late in the season. But they’re also beautiful in spring and winter with their bare trunks.”

Annie is always looking for ways to increase the enjoyment of visitors. She has dreams of serving country high teas on tables sitting under the trees where people could drink from nice china. You might think of her as entrepreneurial, but Annie says she has learned to take things one step at a time.  “If everything were to have happened all at once – the garden, the little villages, the church, the bus loads of visitors – it would have been overwhelming. I couldn’t have coped. “Instead, I feel as if I’ve been offered just one idea at a time and, gradually, piece by piece, it’s all come together.”