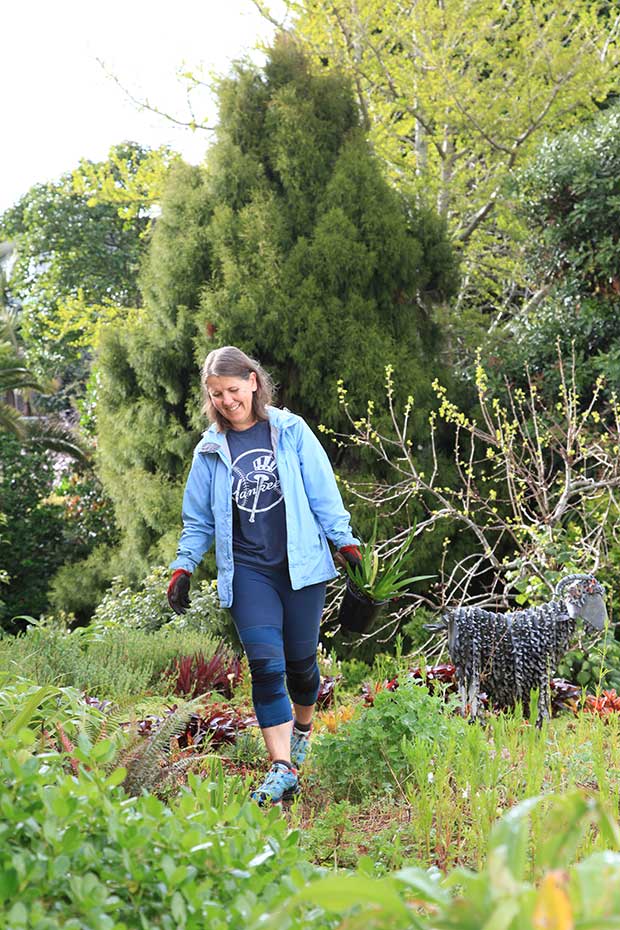 A soil scientist is maximizing her growing capacity by planting well above ground without soil.

Walking through Dr Robyn Simcock’s inner-city Auckland garden can be a topsy-turvy experience.

Her bee-attracting borage, salvias and sedums resemble a meadow – except that they are three metres off the ground on the living roof potager above her workshop. Passersby do a double take at the sheep sculpture among the bromeliads and natives planted on top of the garage. 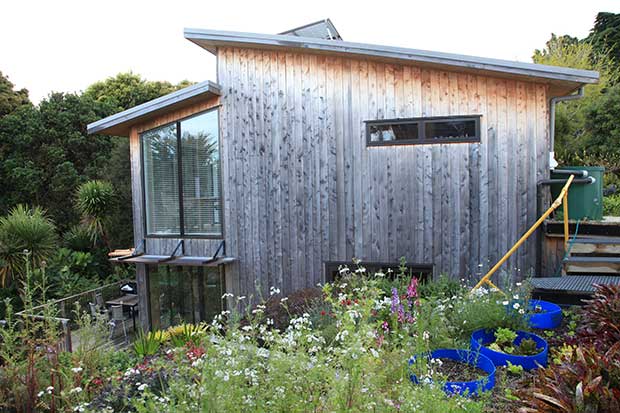 Grow drought-intolerant plants such as lettuce in rings and surround them with 50mm of mulch. The ring prevents mulch from washing away or being distributed by birds.

Out the back, the hen-house roof is camouflaged among native bush with Poor Knight’s Lily, epiphytic ferns and creeping native groundcovers. Robyn and her husband designed and built their eco home, with its living roofs, in 2015.

The property is not only a beautiful green break in the landscape of suburban houses, but its roofs provide productive food-growing space where little of the ground-level garden is in full sun. 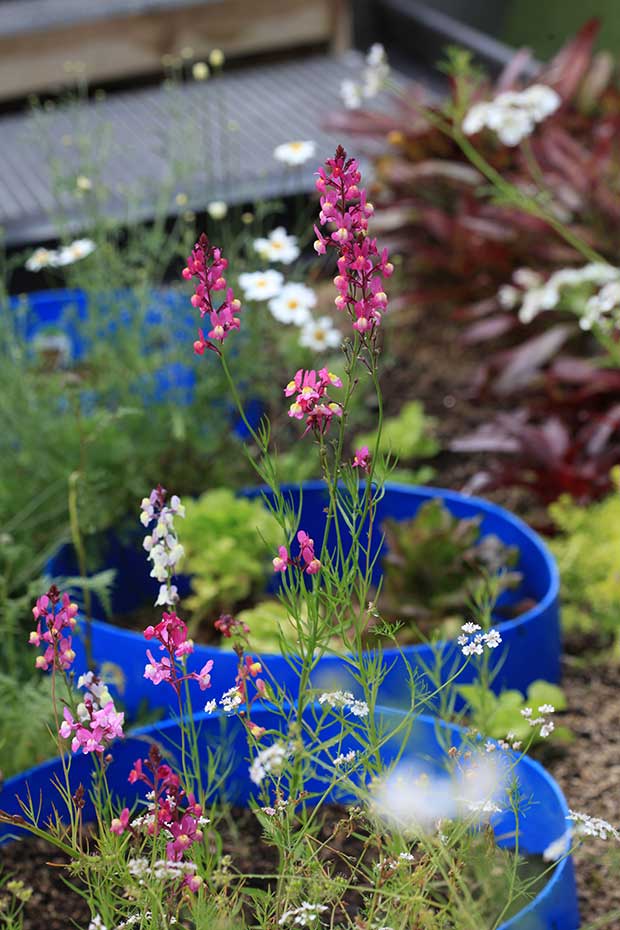 The garden above the workshop produces edibles such as thyme, prostrate rosemary, peas, beetroot and lettuce. The growing media, which is only 200mm deep to reduce weight, dictates the planting of shallow-rooted and low-growing plants.

“If I grew carrots they’d be the globe variety, and because it’s a roof I can’t just put a stake in the ground as it will damage the waterproof membrane,” says Robyn.

“However, there are examples overseas of orchards on rooftops with deep-growing media of 0.5m to 1m,” she says. 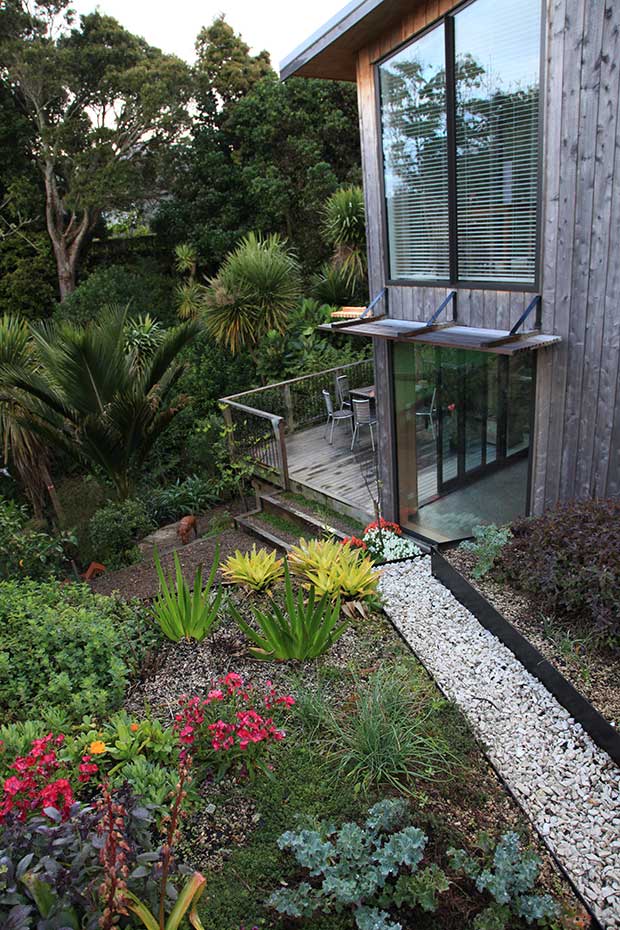 Living roofs do not contain top soil or garden mixes, plants grow in a media of light-weight aggregate such as pumice and zeolite (80-95 per cent) and 5-20 per cent organic matter such as sphagnum peak or composted pine bark fines. 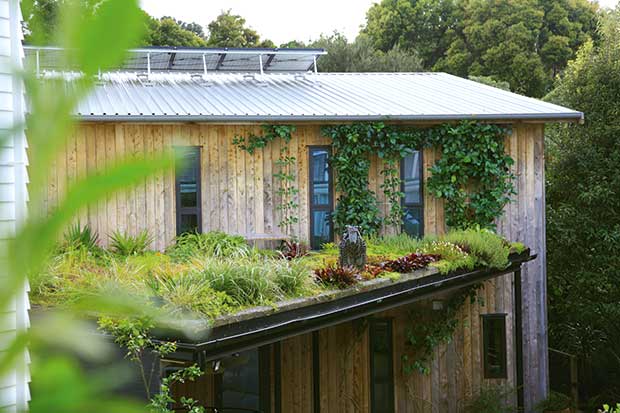 A living roof’s elevation from the ground, and increased airflow on rooftops reduces susceptibility to fungus.

Robyn’s plants are almost entirely watered by rain, which prevents her growing annuals over January and February. However she’s found space to plant other edibles, placing them against fences, including espalier plums, a small fig tree and a bay tree underplanted with silverbeet, parsley and basil. 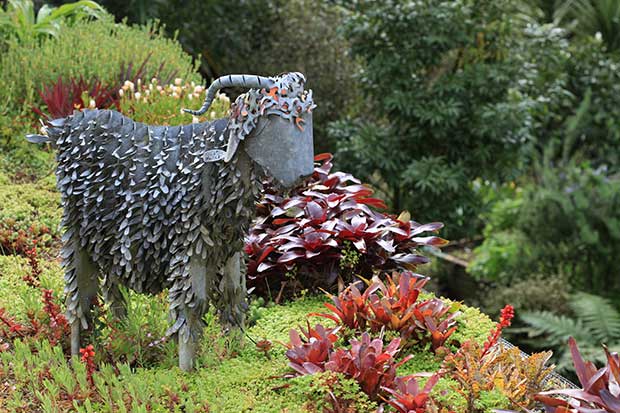 A metal sheep steals the limelight on the garage roof, where the media depth varies from just 30mm to 200mm (where natives are growing).

Robyn is an ecologist and soil scientist with Landcare Research and has consulted with several councils regarding the benefits of living roofs in urban planning.

They provide insulation to buildings and reduce summer temperatures and the amount of run-off into storm water drains. 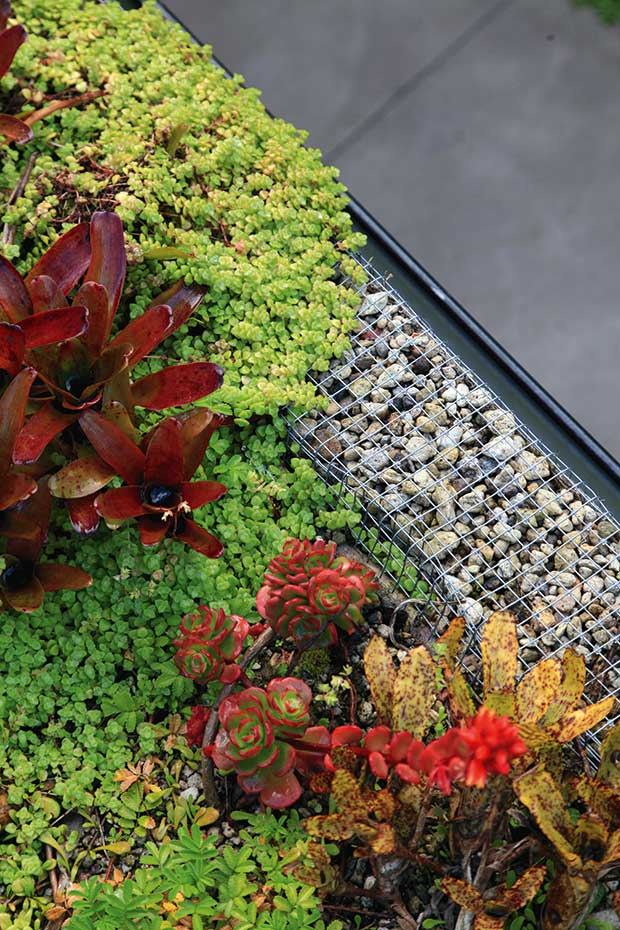 She spent five years working with storm-water engineers Elizabeth Fassman-Beck and Emily Afoa from the University of Auckland, designing and testing the best growing media for living roofs with a capacity of 50-150mm, and to what extent they mitigate storm water runoff in Auckland. 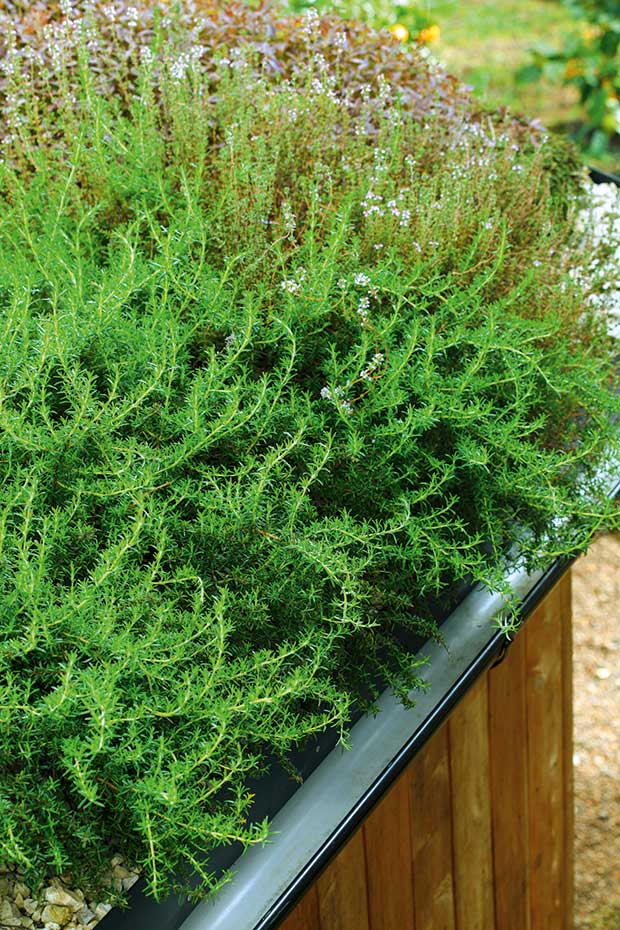 The workshop roof produces edibles such as thyme, prostrate rosemary, chives, peas, beetroot and lettuce – some of these are self-seeding and popping up in places that suit them, says home owner Robyn Simcock.

The results showed a blend of pumice, zeolite, pine bark fines, mushroom compost and sphagnum peak had the best water retention capacity in the Auckland climate.

The study also revealed that even a roof with as little as 50-75mm of growing media can prevent more than half of Auckland’s annual roof-top runoff dispersing into storm water drains. “Living roofs are a well-researched solution to many urban problems such as sewage overflows and lack of plants for insects,” says Robyn.

“The greatest problem seems to be convincing engineers and councils of the benefits.”

➋ Get the structure right: use quality waterproofing and don’t add too much organic matter as it will decompose and thin over time (topping up growing media is a difficult task)

➌ Start with a clean growing media and remove any unwanted plants or weeds before they seed. “The most aggressive and difficult weeds to remove are often legumes, such as clovers and lotus,” says Robyn. Tree weeds (such as pohutukawa, privet, cotoneaster, cabbage tree and silver birch in the South Island) need to be removed annually.

STRUCTURE OF A LIVING ROOF Substrate
A lightweight growing media (mostly made from pumice) with sufficient growing depth.

Drainage layer
Typically made from a synthetic mat or granular material, it helps water flow off the roof and creates air circulation for plant roots.

Waterproof layers
A waterproof membrane of synthetic sheeting and a synthetic root barrier system protects the roof from damage.

A moisture-retention layer or layers increase the volume of water held on a roof.

More stories you might like:
Behind the scenes on the saffron harvest at Wynyard Estate in Central Otago’s Teviot Valley