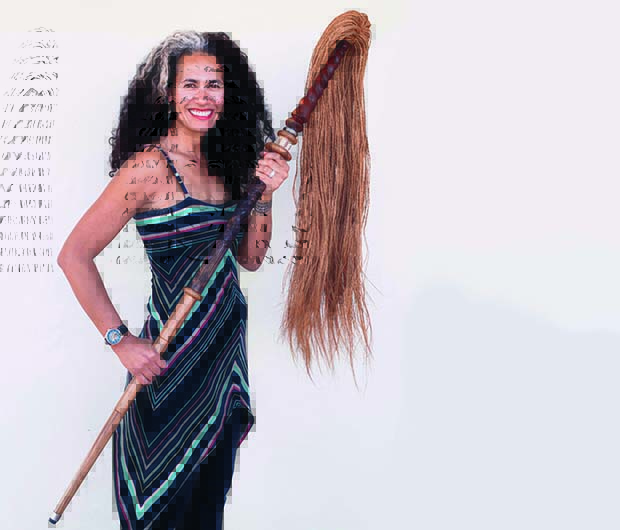 Selina’s time as poet laureate has come to an end, but she has many more stories to tell, beginning with her empowering new book, Mophead.

It took a group of intoxicated Pākehā businessmen to make one Pacific Island woman realise how far she’d come since her days as the kid with frizzy hair – and how far she still had to go.

Buzzing after her farewell as New Zealand’s 11th poet laureate, having held the honour for 2017-19, Selina Tusitala Marsh walked back to her hotel in Wellington through the Parliament grounds. The associate professor at the University of Auckland, who’s of Samoan, Tuvaluan, French and Celtic descent, was in full cultural dress.

She was carrying her hand-carved tokotoko, or ceremonial walking stick, which has accompanied her for the past two years as she has worked on her poetry and promoted the genre throughout the country. (Each laureate is presented with their own tokotoko, a Māori symbol of status and authority. Selina’s is topped with a distinctive Samoan fue, or fly whisk.)

In an instant, Selina realised she had to walk past the men to get to the elevator. The 48-year-old says she instinctively hesitated. They turned to look at her as one called out, “Here comes the cleaner”. Selina says she wasn’t surprised, just shocked at their rudeness.

“I could have been an overseas dignitary, but even if I was the cleaner, you don’t treat people like that,” she says, admitting she was shaking as she got into the elevator.

The encounter, which she describes as “a punch in the guts because it reminded me that I was a brown female body” also inspired a powerful story. “It was an appropriate end to my time as poet laureate because it was a beginning. It confirmed for me how few New Zealanders know about the title.”

Selina gave this particular story three different endings. The first involved eviscerating the man, slicing him from groin to throat.

“And I didn’t mop it up!” The second is what actually happened: she turned to the leader of the group and asked, “Do you know who you’re speaking to? I am the poet laureate and this [thrusting her tokotoko at him] is a toanga [national treasure].”

She now prefers the third ending. Rather than asking a question and inviting further comment, in her new book Mophead: How Your Difference Makes a Difference, she simply writes, “Let’s talk about your rudeness.”

As a child, Selina wrote a poem about an anti-nuclear protest that was published in Grapevine magazine. Something about her printed voice made her realise its power. She also discovered the joy of the spoken word. She’d crawl under the hedge and recite spells, lines that captured rhythm and cadence, as she stirred her mud cauldron.

Her “wild hair” has meant she’s always stood out. Now, she wants her acceptance of her differences to make a difference to others. Mophead is a “graphic mini memoir”, which is designed to appeal to the broadest possible audience. Selina’s dream is to see it in every school in New Zealand and the Pacific. Be it wild hair, red hair or extra height, rather than try to control their differences in order to conform, as she did, even suppressing her flair for writing until she went to university, she hopes kids accept them.

“I want everyone to know about the poet laureate, to take it outside of the elite circle, to show everyone that different is okay.”

Inspired by Spike Milligan, lifelong doodler Selina illustrated Mophead too. Sketches of her trademark tokotoko feature throughout the book.

Selina’s living up to the name she inherited from her Tuvaluan grandfather: Tusitala means ‘teller of tales’, the name that was bestowed on Scottish novelist Robert Louis Stevenson, who died in Samoa. A sequel to Mophead is planned and there will be 11 tokotoko tales, one for each part of the ceremonial walking stick, which can be disassembled.

Selina also intends to expand her PhD thesis into a book. It focused on three Pacific women writers but the book will feature 16. “The floodgates have opened for these Pacific Island writers,” she says.

Other ideas are swirling too; now mother-of-three Selina’s concern is having the energy to get it all done. To ensure she stays grounded and fit, she goes running, which she says feeds her soul. A former kickboxer, Selina has become a serious trail runner. She recently completed the Great Barrier Island Wharf to Wharf half marathon, staying on the island for nine days following it for a self-imposed writing retreat.

FAST FACTS ON A FAST TALKER

* Selina grew up in West Auckland’s Avondale and now lives on Waiheke Island.
* She was the first in her family to go to university and the first Pacific Island student to graduate with a PhD in English from the University of Auckland.
* She has three sons with her husband David Marsh.
* Early writers who inspired her were Patricia Grace and Witi Ihimaera. –
* She composed then performed the poem Unity for Queen Elizabeth II at Westminster Abbey in 2016.
* She’s published three collections: Fast Talking PI, Dark Sparring and Tightrope.
* In the 2019 New Year Honours, she was appointed an Officer of the New Zealand Order of Merit.

For more information about Mophead and to buy the book, visit tusitala.nz.