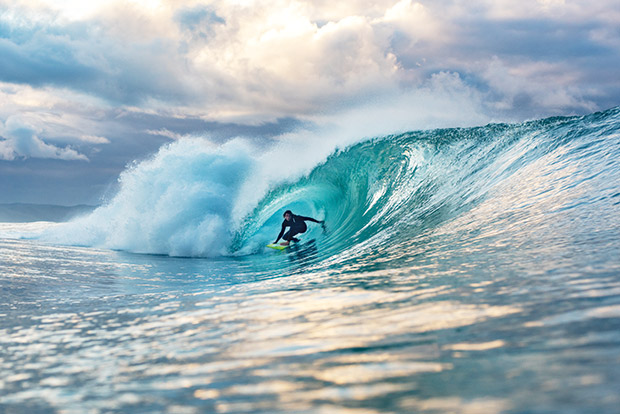 Ricardo Christie started surfing almost before he could walk and was still in his teens when he won the national championship. He is one of only two male Kiwi surfers to have competed on the World Surf League Championship Tour.

Surfing is all about motion. Ocean swells and currents, waves big and small, roiling whitewash close to shore; fierce winds, gentle breezes — either offshore (favoured) or onshore. Nature sets the tempo, calls the shots: changeable, moody, sometimes dangerous. To be among it is, as Ricardo Christie describes, an intensely emotional experience: “Time stands still.”

It has always been this way for him, this visceral reaction to being on the water. “I had that connection when I first started surfing, and it only strengthened as I became more involved in the sport,” he says. “There are certain conditions where the connection is intense, and that’s usually when it’s big and barreling, and there’s a risk to my life.”

The reward for putting his life on the line is the resulting euphoria. In that time-stands-still moment, he says everything else slips away: “Nothing matters. Everything becomes clear. It’s pretty amazing.” 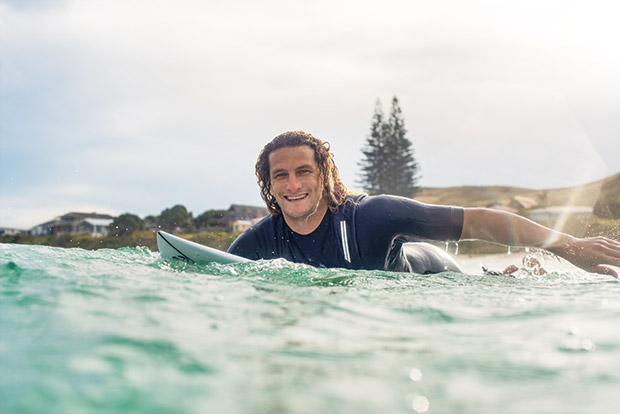 Surfing has always been a big part of Ricardo’s life. He was born in Dunedin, where he lived in St Clair, and was introduced to surfing by his half-brother Danny Carse, five years his senior. When Ricardo was six years old, the family moved north, relocating to the tiny settlement of Māhia, between Gisborne and Napier.

After a year, Danny returned to Dunedin to live with his father, but he always holidayed in Māhia. Between visits, Ricardo spent as much time in the water as he could, hell-bent on emulating the surfing skills of his talented big brother. “I wanted to be like him. Danny was one of the best surfers in New Zealand.”

Danny liked to tease Ricardo by telling him he’d never be good enough to surf competitively. Naturally enough, the ribbing only intensified Ricardo’s desire to prove his brother wrong. “I got hooked; I was obsessed. I surfed every day. Whenever Danny came home, I wanted him to see that I was a better surfer than the last time he had seen me.”

The hard work paid off, and in 2001 at New Plymouth, Ricardo won his first national title, the under-14s. He was 12 years old. The following year at Raglan, he successfully defended his title. The wins kept coming; in Dunedin, in 2003 and at Piha in 2004, he was the under-16s champion.

His greatest national victory, which would propel him to instant surfing stardom, happened in 2005 when, aged 16, he won both the under-18 category and the New Zealand Open. Those victories at Ōpunake made him the youngest ever surfer to win the Open championship title.

Sponsors were suddenly clamouring for his signature. What to do? Opt for the school of life and try to qualify for the prestigious World Surf League (WSC) or stick with a conventional education where surfing would only ever be a pastime? The decision wasn’t difficult.

It wasn’t just riding waves that appealed to Ricardo; he longed to embrace the surfer lifestyle. “If you surf, you must be fit and healthy because you know you have to go out in all elements. It’s about going to the beach, meeting friends and other people doing the same thing. It’s about going on an adventure, being in nature. It’s the whole package, not just the technical sport.”

Ricardo signed up for an adventure that would take him around the globe and offer him the chance to pit himself against the world’s best surfers. When he initially headed offshore, it was to Australia, but he was competing in exotic locations such as Portugal, Brazil, Bali, Hawai’i and Tahiti within a couple of years.

It sounds idyllic, but the reality was often challenging, especially for a small-town Kiwi lad. Although sponsors covered his travel costs, accommodation wasn’t always provided, so Ricardo relied upon his ability to make friends easily to help him forge connections and develop relationships worldwide. “I would go back and stay with the same families every year, and many of those people have become life-long friends.”

Success did not happen overnight. He was 20 when he first competed in the WSL’s qualifying series in 2008, and he didn’t break into the Dream Tour until 2015.

More stories you might like:
This bacon lovin' couple left the city to raise free-range pigs on a 4ha block

Two years previously, he’d decided to move to Bali, accompanied by his family, partner Sophie Steevens and their sons Eli and Milo. Bali’s location made traveling to events much easier. It was also a great place for Ricardo to train due to its big surf, perfect reef breaks, ideal winds and warm, humid weather.

After just one season on the elite tour, his end-of-year ranking saw him return to the qualifying circuit. It was hard going. “A lot of the events were in bad waves,” he says. “I was one of the bigger guys on tour, and I struggled when the waves were small. I was always more confident in bigger surf, like in Hawai’i and Tahiti.”

Tahiti is home to the Teahupo’o break, renowned as one of the most dangerous places in the world to surf due to the size of the waves, their speed and power, and the fact they break over a coral reef lying mere metres beneath the surface.

Ricardo has surfed Teahupo’o and Nazare in Portugal, where waves reach 30 metres. As experiences go, they are equally thrilling and terrifying. Interesting then that his perfect wave is to be found close to home, at Māhia. 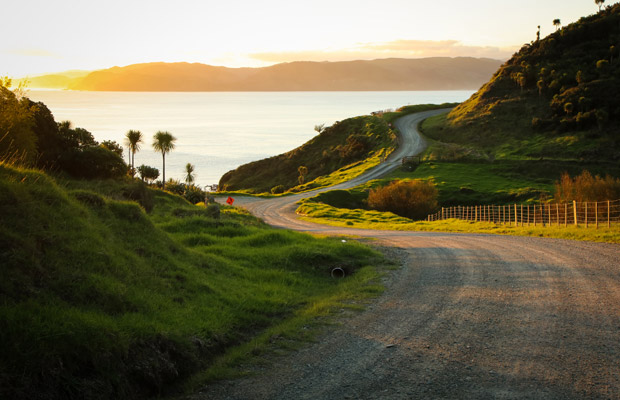 He describes it as a reef break that happens only a couple of times a year. “Everything has to line up — from the offshore winds to a perfect storm tracking in the right direction. It’s going to be hitting the reef so that when it breaks, in surfing terms, it’s a four-to-six foot barreling left-hander.”

Surfing at Māhia is a reality these days, with Ricardo now based in Gisborne after deciding to step away following his second stint on the WSL men’s championship tour in 2019. He had spent the year traveling with his family, which now included his third son Jai, born in 2018, and he hadn’t placed well enough in events to requalify.

More stories you might like:
No matter this 1962 Austin A40 Farina is rife with quirks — its owner loves it all the same

After more than a decade chasing the waves, it was time to come home; no regrets. “I’m as keen as ever. But surfing is now more about enjoyment — having that connection with nature and getting to share that with my family and the local community.”

The most common construction for surfboards is a polystyrene- or polyurethane-foam inner overlaid with fibreglass cloth and finished with an epoxy- or polyester-resin outer shell. The weight and shape of boards vary considerably, and a surfer needs to consider several factors before purchasing a surfboard, including weight and height and skill level.

Surfers fall into four groups — beginner, intermediate, advanced and pro — with the vast majority being either beginners or intermediates. According to Ricardo, a beginner’s board will be up to 2.4 metres in length, 58 centimetres wide, eight centimetres thick and super stable. 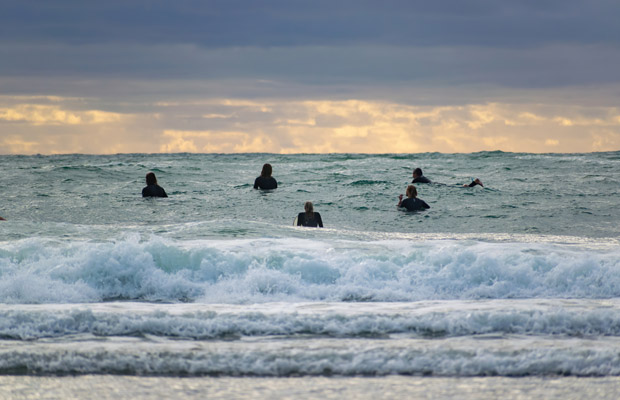 Stability is a crucial requirement when learning to surf as it makes a board easier to paddle and stand upon. Intermediate level surfers should get a board that is one palm higher than their height. There is a range of surfboard types, including shortboards, longboards, stand-up paddleboards and malibu/funboards. Shortboards are the most popular template in use worldwide.

Want to learn to surf? Do it properly, advises Ricardo Christie. The former New Zealand Open champion says seeking out a qualified instructor will ensure a novice is put on the right board, thus giving them the best possible start. Ricardo says there’s a lot more about learning to surf than just equipment. “You’re entering a wild environment, so it’s important to make sure you’re safe, that you know how to read the conditions. A qualified instructor understands the dangers.”

While learning, opt for a quiet spot. Novices are more likely to get themselves in trouble at popular beaches. As well as teaching a client about the ocean, an instructor should also offer instruction on etiquette. “You don’t want to put yourself or others in danger.”

Top tips: Be aware, know your abilities, understand priority, don’t drop in on other surfers, respect the break and the beach.