What to do when you discover a bee swarm 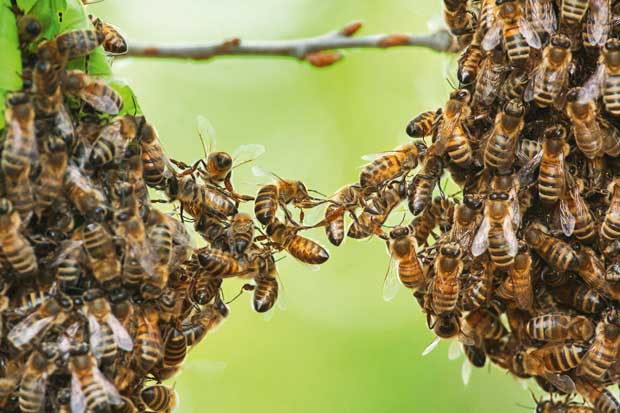 Rudi Robberts stares into the eye of the bee swarm.

My awesome fiancée is the only hairdresser in our lovely one horse town of Patea, 60km north west of Wanganui. Actually, it might be more than one horse but you get the idea. A client rang her, but not for a hair appointment. She had bees in a hole under her window and lots of them! She knew I knew about and owned bees, and her call started panic battle stations in my head. But there was a problem: we only have one car and my wife-to-be was shopping for our wedding. While my patience was in low supply, I just had to hope the swarm didn’t fly away and settle somewhere else before we could get there.

Luckily, when she returned an hour later, the bees were still there, and I had made crucial arrangements with my beekeeper mate and mentor who agreed to help out.

When we arrived, it seemed the bees had already settled inside their hole. They were humming so loudly, you could clearly hear them through the wall. We had permission from the client – who rents the house – to remove them, but we needed permission from the owner and he was nowhere to be found. What to do? Should we cut a small hole and vacuum? Should we leave it for another day?

While we were pondering what to do, we heard reports of a big swarm two streets down and heading our way. A huge swarm. HUGE! Before we could get our gears turning and organise ourselves, they were on top of us. We didn’t have our beesuits on and we were in jandals as any Kiwi would be in summer (even though I’m South African by birth) and they were going into that wall with furiosity.

We scrambled to get ready and get the bait hive into place, the goal to get the bees out and away from the hole in the wall before the queen bee showed up. We stuffed the holes with grass, sweeping the bees that were arriving into their new home. The adrenaline was pumping and bees were zoooooooming around us like it was full scale war. I had periodic thoughts of “oh dang, we’re gonna lose this one!!!” flicking through my mind as the bees flew around us.

But then we started noticing fanning at the entrance of our bait hive and that’s when we knew we were winning. Minutes passed as we moved more and more bees into the special hexagonal hive I had designed. It has a glass window that slides open so we could watch the bees inside, extremely helpful when you’re trying to do this work.

After half an hour we were buggered, sweat dripping from our heads, hearts beating fast, fighting off bees that wanted to get into their preferred location in the wall of the lady’s home. Then, just as fast as it all started, it all went quiet and the panic eased. I am very proud to say they settled into their new home and I survived being in the eye of the swarm. 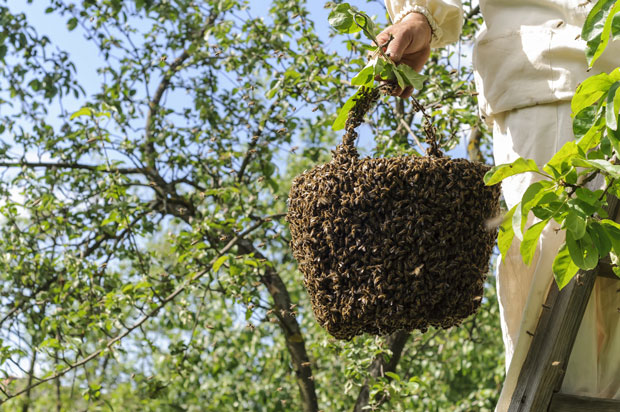 WHAT TO DO IF YOU SPOT A SWARM

Keep away from a swarm, but don’t be scared as the bees should be calm. However, try not to provoke them, and don’t stand in the way of the scouts. Watch carefully and you’ll see them flying off and returning as they try to locate a new home.

A swarm of honey bees will need to be collected as bees in the wild are almost certain to die from disease issues. It’s rare to need to kill a swarm. There are beekeepers nationwide who can help you out.

Find contact details for APINZ beekeepers who will pick up a swarm, NZ-wide: 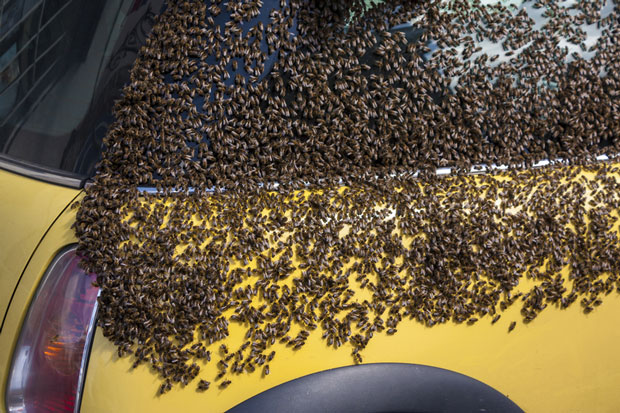 A swarm resting on a car.

WHY A SWARM IS REALLY A BRAIN, TRYING TO FIND A NEW HOME

There are several reasons why a hive will swarm. This is when the queen and often half or more of the bees will abandon their hive/home in search of a new one. The reasons include time of year (spring, summer), lack of food or not enough room to store food to feed the hive, and too many new queens growing. When it all comes together, the queen and her court will leave.

Thomas Seeley is a US biologist who has really got his hands dirty when it comes to the dynamics of swarms. He likens each bee to a neuron and the collective swarm to a brain, trying to work out where is the best new home for the hive. Not too big, not too small, defensible. It’s known as swarm intelligence and it’s the same idea when you see huge flocks of birds seeming to move as one, or schools of fish doing the same thing.

But Seeley’s work with bees is amazing, described as ingenious by his peers. His experiments have included setting up two ‘perfect homes’ for bees in two locations, then marking the scouts that find either one with different coloured paint. When the scout bees come back marked in either pink or blue, Seeley and his team have observed their behaviour as to how they decide which home is better. They have found enthusiasm counts.

A scout that ‘dances’ more than 200 circuits is keen on a particular place and will inspire other scouts to check out her favourite spot. The second lot of scouts will then do the same, sending out yet more scouts. A scout will also repeatedly make the trip to what she thinks is the perfect house, dancing each time she comes back to encourage her fellow scouts.

The more trips she makes, the more she influences her fellow scouts, but she will eventually stop. Seeley’s work has shown this means if a better spot comes up, the group don’t get stuck with a previous site that is not as good. Scouts on one team will head butt scouts on the other, which causes the ‘rammed’ bee to stop dancing, meaning there are more scouts in favour of one spot.

When it gets down to a final group of 15 scouts on one team, they head butt each other into silence, then the swarm makes its move to its new home. This can take 2-3 days, and in the meantime the swarm itself should be fairly calm as they will be loaded up with honey and waiting for the signal to go.