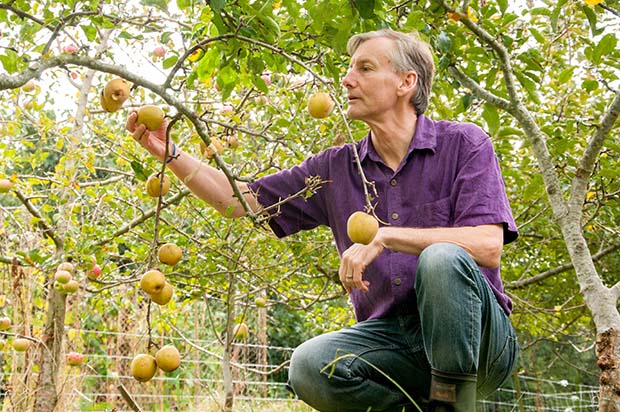 Mark with a Russet apple tree in the trust’s garden.

He looks like your everyday accountant, but in his spare time, Mark Christensen is a super gardener, working with scientists to help give you every chance of eating the very best cancer-fighting foods in the world.

Who: Mark Christensen
What: Heritage Food Crops Research Trust
Where: Whanganui
Web: www.heritagefoodcrops.org.nz
Mark was part of a NZ Tree Crops Association team that discovered an old apple tree which they called Monty’s Surprise, now known to be full of antioxidants that inhibit cancer cell proliferation. In 2006, he received the NZTCA’s Dr Don MacKenzie award for his research efforts. In 2007 he was voted Gardener of the Year for the Whanganui/Manawatu area by NZ Gardener magazine.

Meeting Mark Christensen is like having a collision with a super ball. The enthusiasm and energy is palpable and infectious. If you weren’t a believer before meeting him, you will be after.

For four days of the week, Mark is a chartered accountant. But for the other three days, he swaps his suit for gardening gloves and works to find the best medicinal fruit and vegetables for human health at the Heritage Food Crops Research Trust (HFCRT) property in Whanganui, along with a diverse group of volunteers who have caughthis vision.

Mark is a champion of heritage food crops. He volunteers as director of the Trust, and the Trust’s research has confirmed the superior health benefits of certain heirloom apples and tomatoes, attracting international attention. 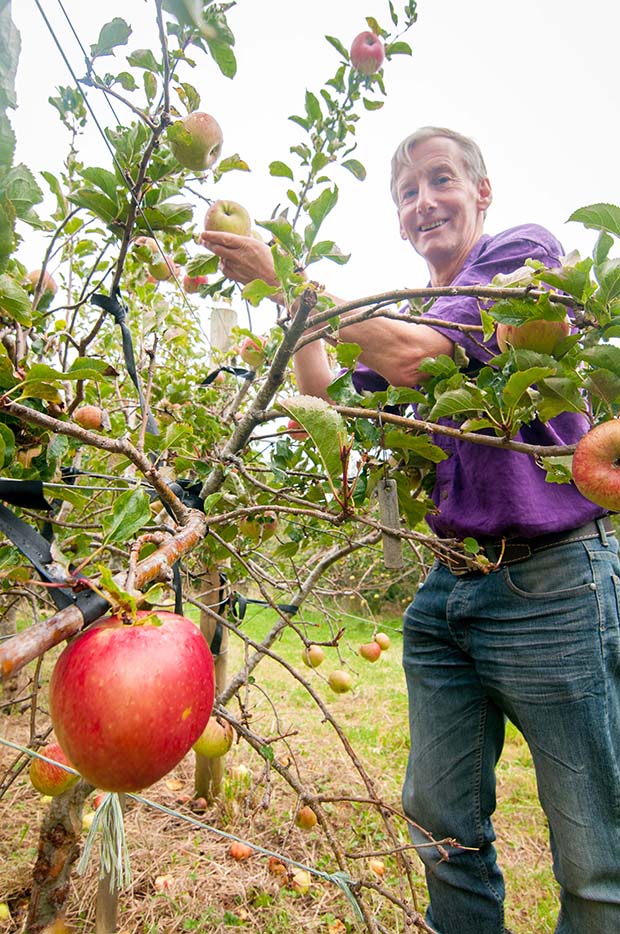 Mark with the Monty’s Surprise apple.

It all started in 2002 when Mark became concerned about what he sees as an epidemic of cancer in society.

“I wanted to know what caused it and what people could do to avoid getting cancer. There is quite a debate about the hereditary component of cancer. Our understanding is that it is an hereditary disease, largely activated by environmental factors.”

We’ve all heard that an apple a day keeps the doctor away. Mark took that much further, discovering overseas studies which indicated an inverse relationship between cancer and apple consumption. 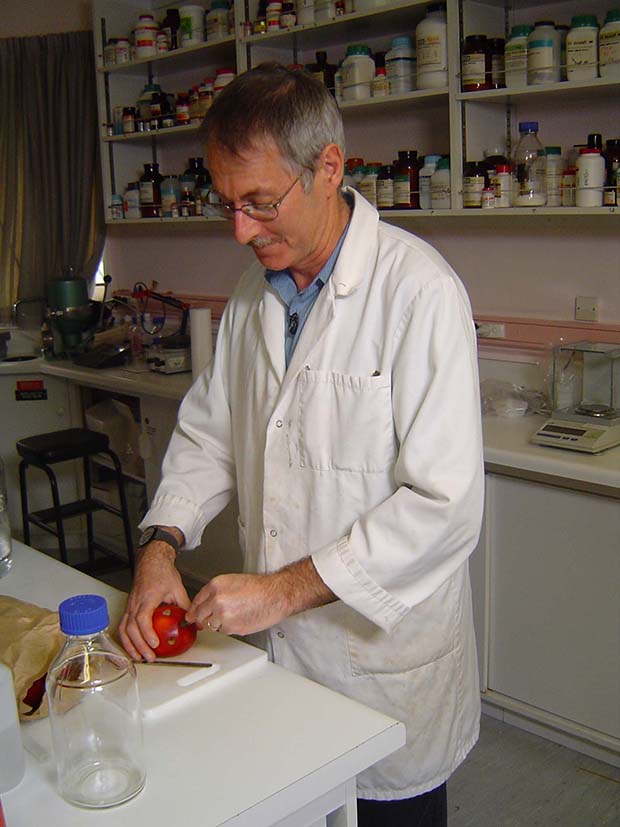 “Researchers at Cornell University had found that phytochemicals in the skin of Red Delicious apples inhibited colon cancer cell growth. A large Finnish study found apple intake was associated with reduced risk of a large number of chronic diseases. My question was how do New Zealand apples compare?”

Eventually Mark tracked down Dr Tony McGhie of Plant and Food Research in Palmerston North. Tony was already interested in the health benefits of commercial varieties for marketing purposes. However a lack of large scale commercial plantings of heritage varieties meant there was no funding for testing them. 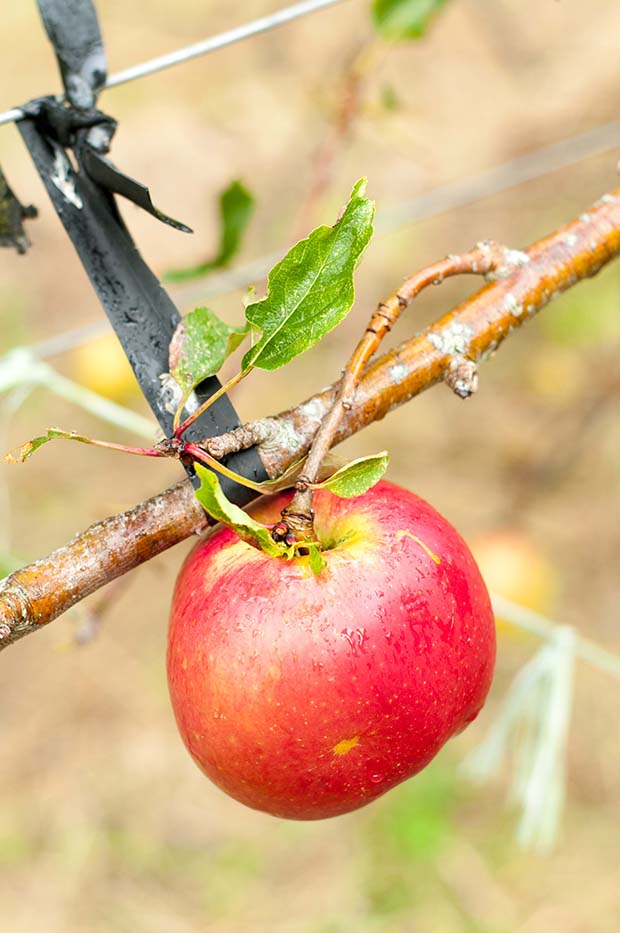 But Mark’s enthusiasm won him over. A small collaborative study was set up which evolved over a four-year period to test 250 heritage and seedling apple varieties.

That’s when they got a surprise of the very best kind. The results showed heritage varieties consistently out-performed commercial varieties for beneficial compounds, which inhibit cancer cells. Two varieties in particular – NZ’s very own Monty’s Surprise, and Hetlina, an old European eating apple – contained levels several times greater than the most beneficial commercial apple variety.
True to its name, the skin of the fruit from a seedling ‘Monty’s Surprise’ was the biggest surprise, testing with higher levels of quercetin flavonoids than any other apple in the world.

“We believe that the unique New Zealand seedling apple Monty’s Surprise is the best in the world for human health, and can be eaten as a preventative measure to reduce the incidence of disease in the human body.”

French researchers had found that procyanidins (condensed tannins) in the skin of a French cider apple were effective in inhibiting colon cancer proliferation. Excited by the New Zealand research, in 2006 they tested Monty’s Surprise and found it even more effective than their cider apple. In-vitro testing in 2007, using a powdered extract, showed an 80% inhibition of those cancer cells. “We were absolutely delighted with these results – it was a breakthrough!”said Mark. He believes it is the combination of phytonutrients in Monty’s Surprise that work with the body’s immune system to prevent cancer cells from activating and initiating a disease process.
Old apple varieties tend to have big advantages over the apples you can buy as breeding programmes in today’s commercial varieties do not use nutrition as a major criterion.

“Modern apple varieties are not bred to keep you healthy,” says Mark. 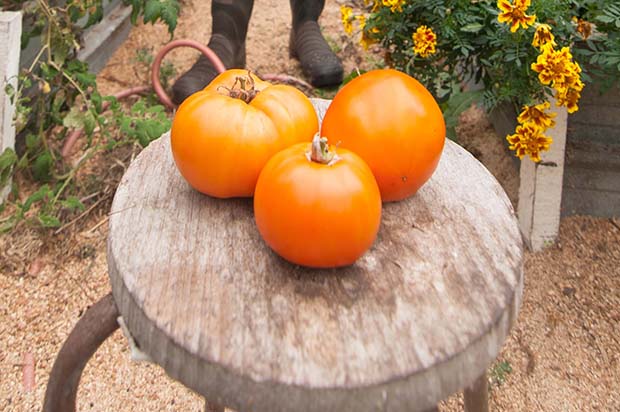 FROM APPLES TO TOMATOES
Mark was so encouraged by the results, he began to question whether old varieties of other fruit and vegetables might also have more beneficial compounds than their modern cultivars.

Red tomatoes are widely recognised for the health benefits of lycopene. It is a powerful anti-oxidant which helps protect against degenerative diseases, but the human body cannot produce it so it has to be ingested. Red tomatoes contain it as all-trans-lycopene, however its linear molecular structure means it needs to be cooked and preferably eaten with fat to make it easily absorbable through the intestinal wall to get it into the bloodstream.

Scientists at Ohio State University had already found an orange heirloom tomato called Tangerine that contained a different form of lycopene, tetra-cis-lycopene, with a ‘bent’ molecular structure. Their trials using tomato sauce found this lycopene was much more easily absorbed into the bloodstream than the type found in red-coloured tomatoes.

“They concluded that if people just switched to consuming orange tomato sauce they would have much greater health benefits,” says Mark. “What was interesting was that when I contacted the American scientists they still assumed that in its raw state, the orange tomato would perform as the red, and not be as easily absorbed.”

But Mark’s team had been researching tomato history and discovered that the original tomatoes cultivated in Mexico and introduced to Europe in the early 1500s were orange, known in Italy as ‘pomodoro’ or ‘golden fruit’. 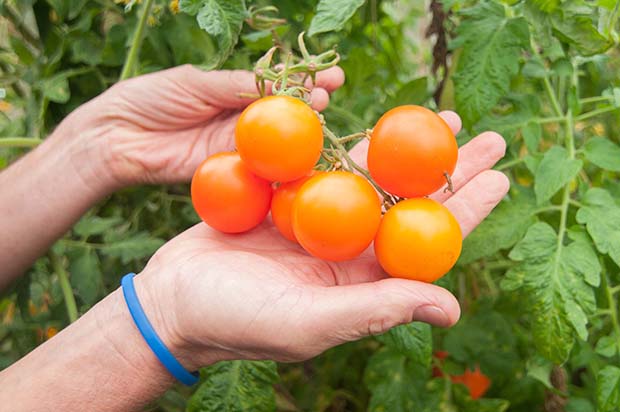 “A little light bulb went on and we realised they would have contained tetra-cis-lycopene (the orange form of lycopene) and should be better for you when eaten raw.”

When gardeners made the first cross to change the golden/orange tomato to be red, it bred in the red form of lycopene because it was a dominant gene, and bred out the orange form of lycopene (the recessive gene), switching the type of lycopene in the fruit.

“The resulting red tomato, which went on to be further crossed and hybridised, is a human construct,” says Mark. “It’s not really appropriate for human consumption, because it lacks the bioavailable form of lycopene, which is a major health component of tomatoes.”

In 2007 the Trust began searching for original orange types of tomato, importing hundreds of varieties of seed, planting them, then testing through Plant and Food Research. Initially all colours, shapes and sizes were looked at. Mark in his greenhouse.

“It wasn’t until 2013 that we had our first breakthrough in finding 12 varieties containing the original form of lycopene, all heirlooms and all distinctively in the golden to orange colour spectrum.”

They now have 56 varieties with confirmed tetra-cis-lycopene. Mark’s hypothesis that these tomatoes should be better for you when eaten raw was tested in a human trial in 2014 with the orange variety Moonglow compared alongside a high lycopene red tomato control called Rosalita. Volunteers at Plant and Food ate a ‘meal’ of diced up tomato, then underwent blood tests at four, seven and 24-hour intervals afterwards. The results were a breakthrough.

One scientist described it as ‘a goldmine, from a scientific point of view’. 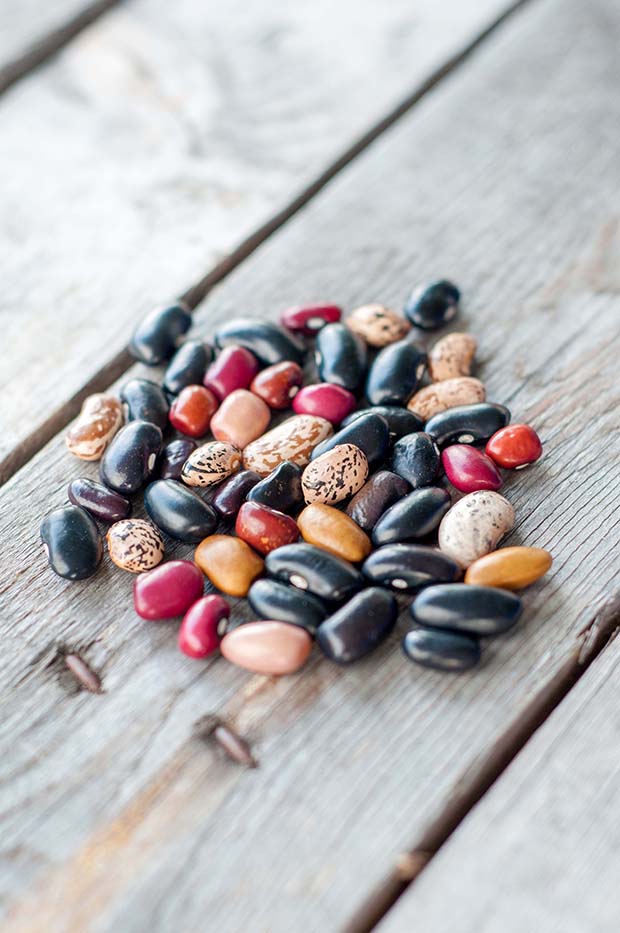 “It’s fascinating. There has been quite a bit of research on the potential health benefits on preventing cancer, but it has all been done on red tomatoes. With orange tomatoes there is not only much better absorption but there are other intermediate compounds not found in red tomatoes.”

Mark believes these may also have beneficial effects and a synergistic relationship with lycopene. A further planned human trial will determine how long lycopene circulates in the blood.

The cost of growing and sharing of the plants is minimal because everyone is a volunteer says Mark.

“But it’s the science that is the expensive part.”

Mark has been very appreciative of the funding the HFRCT has received from local people. The next step will involve comprehensive studies over three years for the prevention of prostate cancer and will need philanthropic funding from further afield. The trust would be interested in hearing from anyone who would like to support this research. Mark is in it for the long haul. As we walk around the property, tasting and chatting, Mark shows me plantings of heritage stone fruit, potatoes, wheat varieties, and stores of fascinating, imported bean seeds, all awaiting their place in the research queue. The next project will probably be carrots because the team can see similarities with tomatoes in that nutritional benefits may have been lost with the breeding for the orange colour.

“We are here to make a difference.”

Mark admits that at the end of his four day working week, he can’t wait to race down the road to check out his heirloom tomatoes and fruit trees. The fact that he gets paid nothing for this half of his working week is irrelevant. 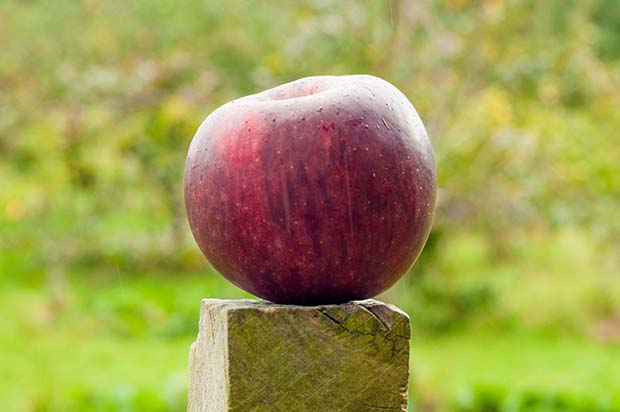 “A long time ago I realised my accounting work would inevitably end up at the shredder, and I wanted to make a more lasting contribution. Here I can be a guardian for the plants and trees and the vision holder for the research. As a charitable trust supported by volunteers, we are not here for the money, we are here to make a difference.”

I leave with a bottle of Monty Surprise cider apple vinegar, a fistful of seed packets and a passion to grow and eat these amazing plants. He has already made a difference for me. 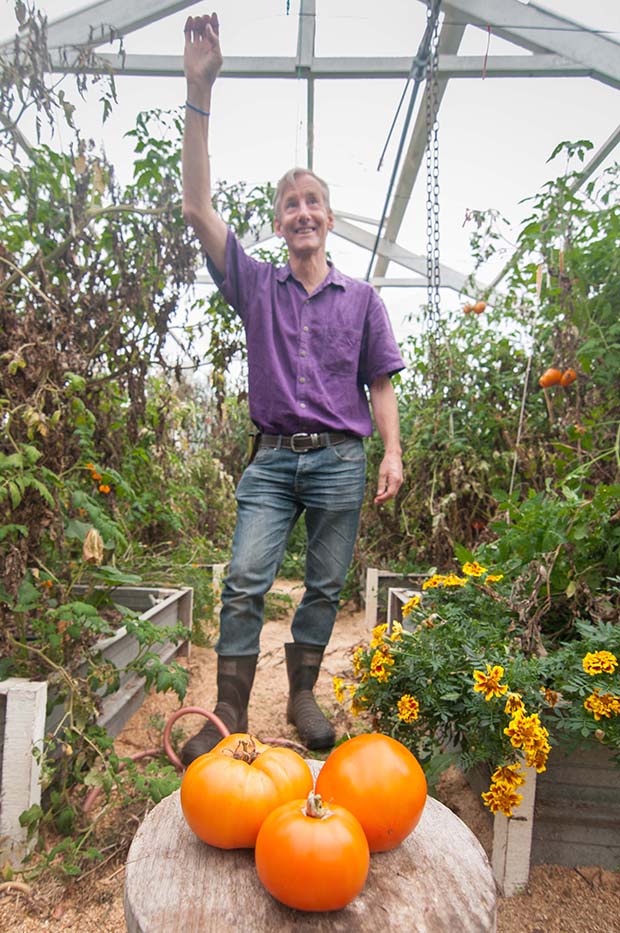 HOW TO SAVE TOMATO SEEDS

Heritage tomato seeds like the ones Mark and the Trust pass on have the ability to self-replicate. Saving seeds is simple:
• Allow one or more tomatoes
to ripen past best eating stage.
• Cut open, squeeze the fruit pulp into a jar, add a small amount of water and leave in a warm place. Do not stir. Allow to ferment.
• After three days scoop off any foam on the top, add water and pour the mixture through a fine sieve. Wash and gently rub the seeds around the sieve.
• Spread seeds onto a sheet of paper and allow to dry (baking paper is good for this).
• Place dried seeds in an envelope and label with the variety name for planting next season.