Do cows need loos? Researchers successfully train cows to use the ‘MooLoo’ Cows can be taught to use a toilet as a way to make farming more eco-friendly. When cows are free to do their business wherever they like, it contaminates the soil and nearby waterways. Confining them to a barn means urine and faeces combine to create ammonia which contributes to greenhouse gases.

University of Auckland-affiliated researchers working with German scientists have successfully demonstrated that cows can be toilet-trained, and it can have a significant effect on nitrate leaching and greenhouse gas emissions.

Researchers Lindsay Matthews and Douglas Elliffe and their German colleagues trained 16 calves to use the MooLoo, a distinctive pen where they were rewarded with food for toileting.

First, they demonstrated that most calves could be trained to hold off urinating. If they began to urinate in the wrong place, the scientists would make their collars vibrate. While the vibration didn’t hurt them, most of the calves soon learned to walk to the MooLoo to urinate.

Next, the calves were put in the bright green latrine pen and rewarded with a food treat when they urinated. 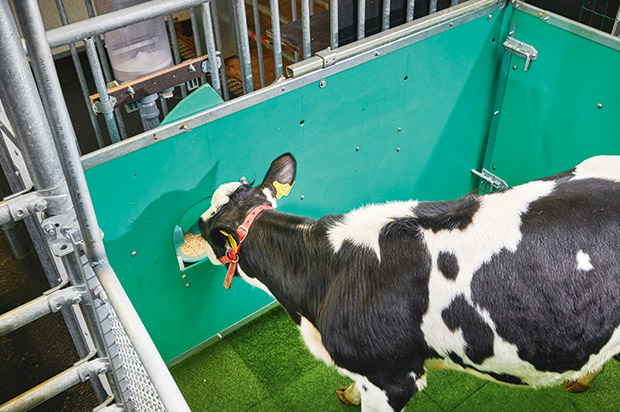 “This is how some people train their children – they put them on the toilet, wait for them to pee, then reward them if they do it,” said Matthews. “Turns out it works with calves too. In 5-10 urinations for some animals, they demonstrated they understood the connection between the desired behaviour and the reward.”

Then, they increased the distance cows had to walk to the loo. If ‘accidents’ occurred in another part of the barn, scientists would squirt a little cold water at them. Most of the calves soon learned the ultimate toilet-training skill.

The calves received only 15 days of training. The majority learned the full set of skills within 20-25 urinations, which compares favourably to toilet training time with toddlers.

Toilet training cows that live outdoors is more of a challenge. However, they do gather for milking and receiving supplements, so it may be possible to train them to use a latrine at those times.

“If we could collect 10-20% of urinations, it would be sufficient to reduce greenhouse gas emissions and nitrate leaching significantly,” says Douglas Elliffe.

The lifecycle of the honeybee