When you think of moisturising creams, soap and shampoo, you probably don’t think potato harvesters, carrot washers and chip slicer that can cut up 25kg of roots in just 10 minutes, but that’s what goes into this award-winning skincare range which has turned out to be the holy grail of lifestyle block business.

There aren’t many people who get excited about modifying their potato harvester, but Georgia Richards is giggling at the thought of the 100-odd days of back-breaking manual labour hers is going to save her and partner Dot Kettle as they expand their peony-based skincare business in Dove River.

“We trialled one last season… a 60 year old potato harvester we borrowed from a guy down the road and it definitely worked really well,” says Dot. “So we bought a more modern equivalent and imported it from China, and we’ve been testing and modifying it.” The glamorous flower is just one, short-term crop

It sure beats getting out the shovels to dig up the peony roots that contain the magical ingredient in their Pure Peony skincare range. By hand, it would take them about 4-5 days to dig up, divide off part of the root system, and then replant one row of about 100 plants, just a fraction of the tens of thousands of plants the couple are now growing. Their new harvester will do the same job in days, but it has been a three year search to find and perfect the process.

When they first started harvesting roots three years ago they were doing it all by hand. Last year they used an onion lifter, but it wasn’t quite right. 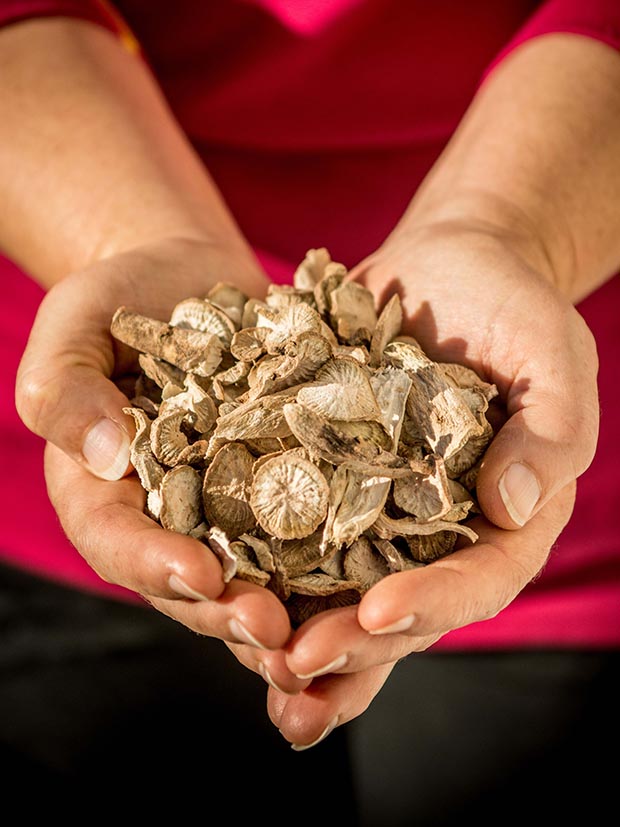 “I watched a lot of Youtube videos of people harvesting cassava and all sorts of root vegetables and how they do it,” says Georgia.

“The key thing for us is we don’t want to damage the plant so we have to get right underneath it, pick it up and not damage the ‘eyes’ on it because we want to put the plant back in the ground once we’ve harvested some of the roots.” 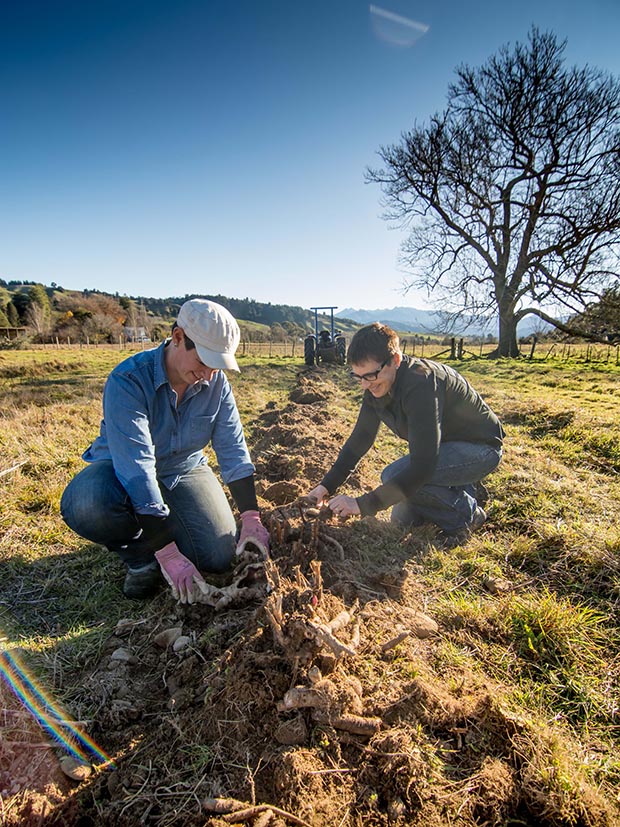 Their new modified potato harvester picks each plant up and drops it onto the row, then can be adjusted to go deeper, harvesting more roots at lower levels with each pass.

More stories you might like:
Why low-fuss Wiltshire sheep are the best breed for Kenmore Farm owner Jane Penno-Chisnall

“You get a whole lot more roots, and it’s those roots that we’re using for our products,” says Dot. “It’s a hell of a lot more efficient than doing it by hand and a hell of a lot less back-breaking.”

When we first met Dot and Georgia back in the May 2015 issue of NZ Lifestyle Block, they had just won a top rural farming award for their Dove River business and had already developed several skincare products, inspired by their sons who all have issues with eczema. Peony roots, ready to be washed

The key to their success is the peony, renowned for its stunning flowers, but now also gaining acclaim for a key ingredient found in its roots, paeoniflorin. The couple were already growing peonies for flowers and were looking to expand their business but weren’t sure what they wanted to do.

The chance discovery that the roots of their peony plants – something peony growers have to dig up each year as part of the growing process – could provide the answer to the issues they were having with their sons’ skin was life-changing. This year, their harvest is bigger than ever thanks to customer demand for their specialist products.

“We’ve expanded and we’re having to cultivate a lot more of the land for peonies,” says Dot.

“We’re looking for better mechanisation to help us achieve that, so a harvester is one thing, the other is we bought locally a cultivator so once we harvest this root, we have to plant the divisions in six acres.

We started with eight acres of mature plant, so there are about 18,000 plants in the ground, and with the new plantation another 10,000 plants will go in.” 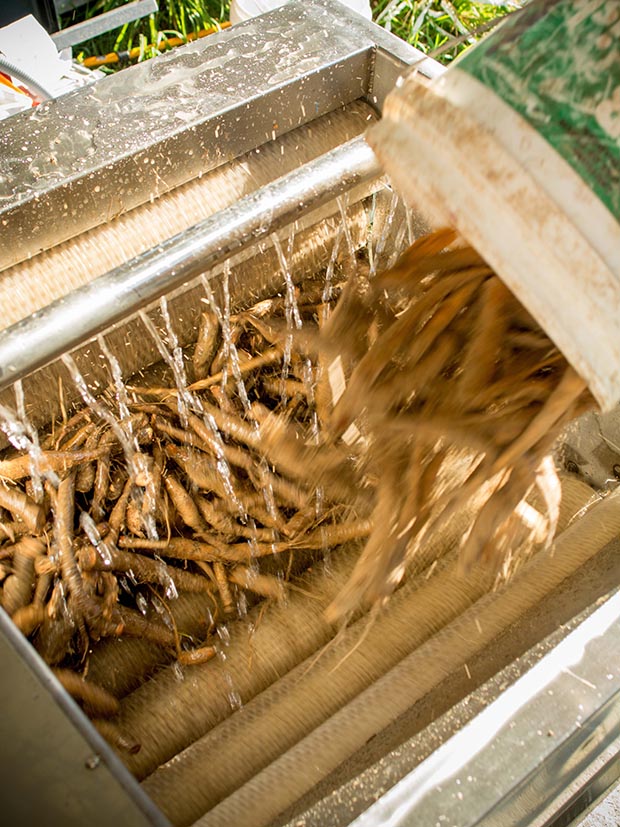 A carrot washer is also perfect for peony root

That has repercussions further down the line. Roots need to be carefully washed and the couple had been using a water blaster to do the job, but this was also a slow process says Georgia.

“We bit the bullet and imported a carrot washer so that was a very exciting machine to take possession of, and that reduced the washing time from 8 hours for 25kg down to about 10 minutes so it’s a massive improvement for us.”

The root must then be sliced wafer-thin so it dries quickly, and that work is now done by a commercial slicer, similar to the ones used to make potato chips. That in turn led to the need for a new dryer.

“We’ve now tripled the size of the dryer this season, and it’s so exciting, it gives us so much more capability, and we can get so much more root through.” 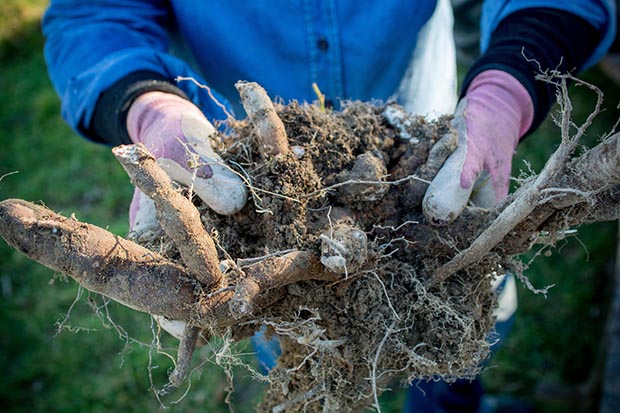 THE RIGHT PEONIES
Georgia and Dot have also been keen to find out which of the 24 different varieties of peony they grow has the highest levels of paeoniflorin, but the testing process could only be done in Australia and was very expensive.

However, as with so many aspects of their operation, their tenacity got them through. They approached Nelson’s Cawthron Institute, a private research company that specialises in food testing and product analysis, to see if it was possible to come up with a testing regime.

“(Testing in Australia) was hellishly expensive, like thousands of dollars,” says Georgia.

“We talked to the Cawthron Institute and we received R&D funding from Callaghan Innovation to test for paeoniflorin which is really exciting for us.

“Now we know which of our varieties have the highest potency which is great for planning our plantations because we know which ones we want to be dividing, and it was really exciting to find out our plants were well above the British Pharmacopeia standards, about 1.7% paeoniflorin.” 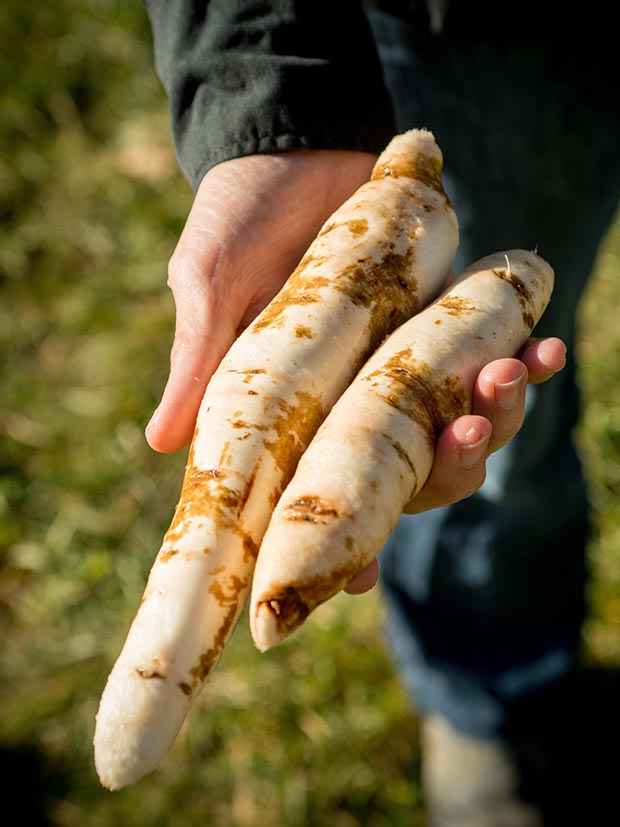 Cleaned and ready for slicing

CUSTOMERS FOR LIFE
One of the important aspects of growing the key ingredient on their farm and running a skincare company that creates healing products is keeping everything as natural as possible.

Their newest skin repair cream has been developed using both Manuka honey – known for its own unique healing properties – and peony root, and the ideas keep coming in from customers.

“When people use our product, they’re a customer for life,” says Georgia.

“They send us wonderful feedback, suggest products to us all the time, so part of our R&D has been around developing new products. One thing that’s been quite exciting is about the product we originally developed for eczema – people with psoriasis have been using it too but one of the problems is they get psoriasis in their hair, so people have been asking and asking for a shampoo.

More stories you might like:
Jared Gulian's journey from city slicker to Moon over Martinborough olive oil

“I never realised but people with really sensitive skin have a problem putting shampoo in their hair because if they put it on their hands, it can destroy the skin on their hands. One of the guys who was in our test group who loved our products told us the problem is, any kind of shampoo for psoriasis wrecks your hands.” The roots are sliced thinly, then placed on racks in a dryer.

The new shampoo has gone down a treat, with the customer sending them before and after shots of his hands, showing how much they have healed.

Another product their customers wanted to see was for acne, so Georgia and Dot now have an acne face mask in their line.

It’s not just their local supporters who have bought into Dove River. The couple are now selling into China through NZ Post’s online storefront on Tmall, a Chinese-based website similar to Amazon. They have a Chinese business partner working with them, and they’re hoping to sell into Singapore soon.

While the sales are good, it’s the practical problems that still require Dot and Georgia’s careful research and experimentation. How to control weeds organically between rows of peonies is a challenge they’ve yet to solve.

“You can’t get out there with the glyphosate,” says Georgia. “We have to come up with intelligent methods that don’t break your back. Last season we used self-propelling lawn mowers, and we mowed and mowed and mowed…”

“And wwoofers!” says Georgia. “One thing we’re doing for this season is we’ve got a cultivator which has arrow head-shaped tines that come off the back of it – we drag that through the rows, it goes down about 5cm under the ground and turns the weeds over.” 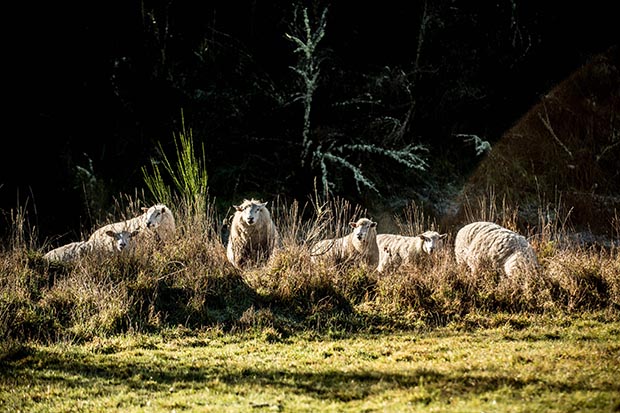 The weeding team getting in some practice

Their other weed management system is now 45 strong and spring lambs will bolster the flock.

“They’re Romney-crosses so as soon as the peony season finishes – the flower season that is – they eat off all the leaves,” says Georgia. “Our sons have got very good at their sheep herding tactics – one is slightly more talented at it than the others!” WHAT IS PAEONIFLORIN?
Peony roots have been used for their anti-bacterial and anti-inflammatory properties in traditional Chinese and European herbal remedies. Modern science can now back up what herbalists have thought for centuries, with the discovery of the naturally-occurring ingredient paeoniflorin.

Paeoniflorin concentrates in the roots during mid-to-late autumn, which happens to be ideal timing for growers who will often dig up, divide and discard unwanted roots at that time. Georgia and Dot then process it for use in their products.