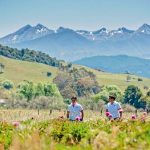 Dove Valley Peony farm is is nestled at the base of the Kajurangi Ranges west of Nelson. Growers Dot and Georgia do not have organic certification but have been growing organically for 18 months. 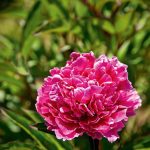 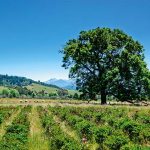 Peonies thrive in a climate with a hot summer and cool winter. 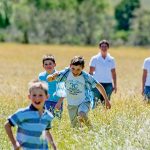 The couple say they have found their paradise, and moving back to city life wouldn’t be possible when their boys are so used to making a lot of noise and running free. 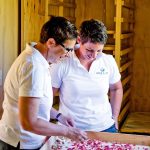 Dot and Georgia use an organic dryer to dry the peony root and petals. 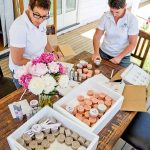 Packing products for clients in New Zealand and around the world.

The peony is one of the most beautiful flowers in the world, but it’s what it grows beneath the soil that has turned into a unique business for one Nelson couple, and changed the lives of their eczema-suffering sons.

There aren’t many, if any, flowers more elegant than the peony. It was serendipitous that it turned out to be the perfect plant to grow on the Dove Valley block Georgia Richards and Dot Kettle bought in 2008.

The lawyer and the IT analyst were living the full-on life of Wellington executives; Dot working for the State Services Commission, Georgia as an IT consultant. They had two sons, a baby on the way, and they were far too busy, says Dot. 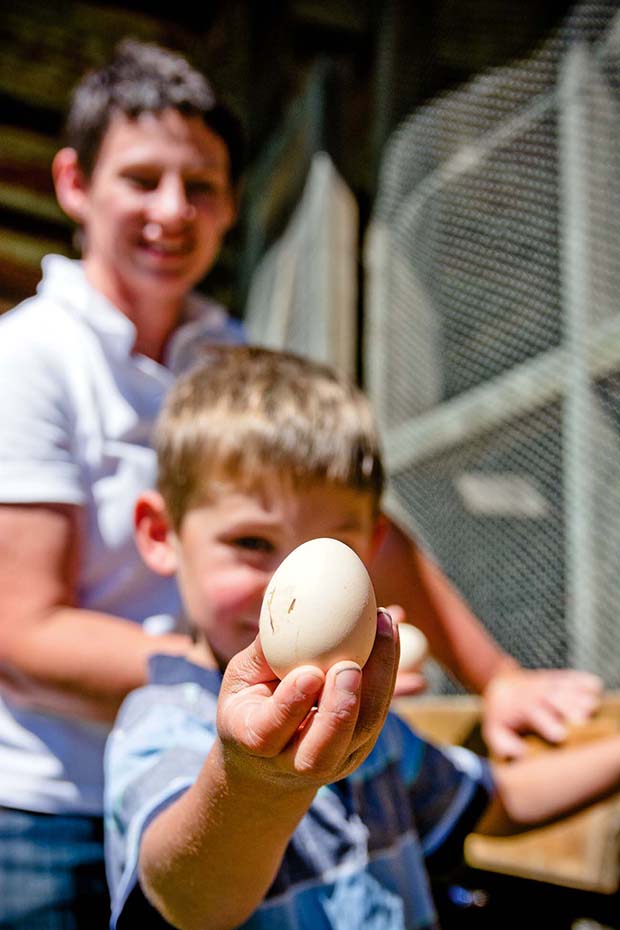 “We actually wanted to have more time as a family together, provide the kids with a real kiwi upbringing. It’s the dream I guess, having plenty of space for them to run around and be boys.”

The plan was to find a small block somewhere around Nelson, set it up over a year or so, then make the move. It didn’t turn out that way.

“We found the property online and we just fell in love with it as soon as we saw it,” says Georgia.

“It was a lot bigger than what we had anticipated buying, but we thought ‘it’s just gorgeous’; one of those moments that women have, we just had to have it.”

A few months later and the family were unexpectedly on the move. Dot took on a new job, as CEO of the Nelson Chamber of Commerce, and Georgia worked from home. But the couple also wanted to develop a business using their land. Enter more serendipity for the two agriculture and horticulture experience free corporates.

“Neither of us had any background in dealing with stock except for grandparents who ran farms,” says Georgia. “But my brother was growing peonies, so we looked into whether peonies would work on our property… and it was definitely a good fit.”

“You just feel like fortune favours the brave, everything just fell into place,” says Dot. “We were worried financially about how we’d make it work, but Georgia moving her job and me getting a job locally meant we could really do it.”

Peonies are pretty particular plants. They need hot summers, very cold winters, frost, free-draining soil and protection from the wind. Dove Valley ticked all those boxes: down to -9°C in winter, up to +33°C in summer, sheltered. Plants take three years to mature and become commercially viable, and thanks to advice from other growers, they made a smooth move into selling the flowers.

But it was Georgia’s research into other uses for peonies that brought them to a moment of serendipity so big that even today it has them shaking their heads in wonder. 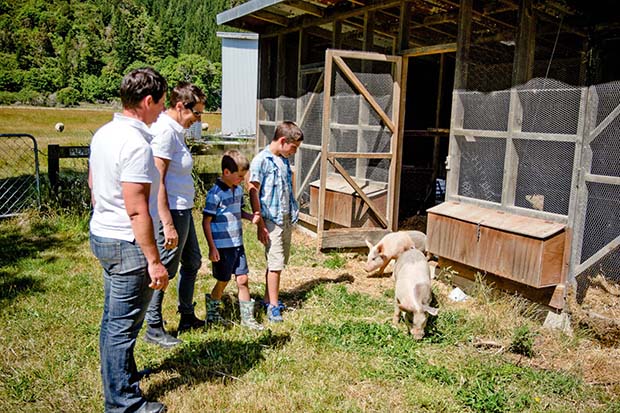 Their sons have all suffered from eczema. Baxter copped it the worst, first developing the itchy, oozing, sore skin when he was just six weeks old. That was the beginning of years of treatment, hours of time and thousands of dollars on doctors, dermatologists and immunologists in a bid to control the immune condition which is common around the world.

The big surprise in Georgia’s research was the discovery that peony root is used in Chinese herbal medicine as a treatment for skin conditions so the enthusiastic cooker and preserver decided to dry some root and mix it into a DIY skin cream.

But it wasn’t until she and Dot attended a Chamber of Commerce function where a company called Global Soap was showcasing its business that things stepped up a notch.

“They were making soap out of beer hops and all sorts of things, and I turned to Dot and said ‘Oh my god, we could make soap out of peonies!’

“Our boys can’t use soap… I bought a dehydrator from China and we dried peony root and Global Soap made it into this soap. All of a sudden we found the kids could use our soap and it really was helping their skin.”

The key ingredient in the peony root is paeoniflorin. It’s now well known for its anti-bacterial and anti-inflammatory properties thanks to scientific research backing up what traditional herbalists in China and Europe have known for centuries. Paeoniflorin concentrates in the roots during mid-to-late autumn, which happens to be ideal timing for growers who will often dig up, divide and discard unwanted roots. 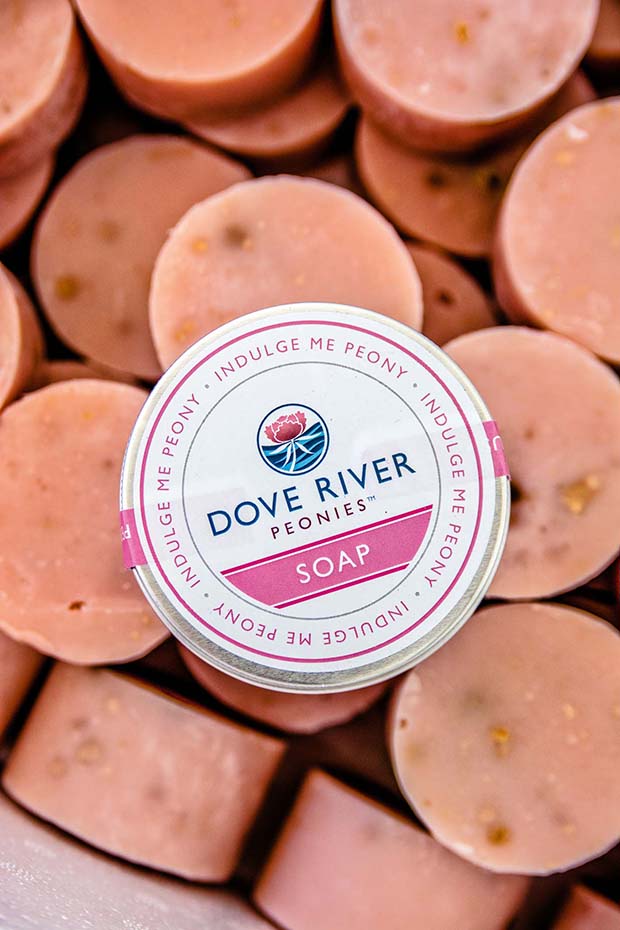 “I can still remember that ‘aha’ moment when Georgia uncovered all this research about the use of peony root,” says Dot.

“We both looked at our paddock full of peonies and went ‘you’re joking, you can’t tell us our paddock is full of something that potentially could help our kids and lots of other families who are struggling to find a natural product that works to help soothe and treat eczema?’ It was one of those moments that was almost too good to be true but it turned out to be absolutely true.”

It has been a roller coaster ride ever since. Georgia began working on developing the soap to find the most effective version for their boys and other people with eczema who volunteered to try it. The winning formula had the minimum ingredients: peony root, vegetable oils, olive oil, water, and lye (sodium hydroxide).

The next step was to make a better version of their cream so they turned to natural product manufacturer Alaron Products, also based in Nelson. Together with Alaron, they developed a more sophisticated extraction process for the roots and spent months experimenting with blends of paeoniflorin (the main ingredient), avocado oil, cocoa butter and natural preservatives.

“We harvest the root and we’ve built an organic drying facililty on site in one of the buildings we have here,” says Georgia. “We have to wash it – there’s a protocol that you have to meet for the harvesting process of paeoniflorin – then we dry it.”

The magic number is 43: take the drying temperature any higher and you cook the magic out of the root. Once they had perfected the process they spent 10 months testing formulas on volunteers with eczema and other skin conditions.

“I’ve found it very frustrating at how slow it has been going,” says Georgia. “But it has been a really vital part of the process and you can’t skip that part because it’s the only way you end up with a product that you’re really proud of.”

What they discovered during testing was that like their own children, many of their volunteers suffered from nut, bee (honey) and lanolin allergies, ingredients commonly used in natural healing creams.

“There’s no lanolin, no nut products and no bee products in our cream,” says Georgia. “And what we found by stripping the cream right back and just having as much paeoniflorin as we could and nothing else, we actually got the best results from that.”

“It takes the inflammation away which helps stop the itching,” says Dot. “And being anti-bacterial, kids scratching with their fingers all the time, they’re spreading bacteria throughout their skin and if they’ve got broken skin it’s just a recipe for disaster.”

The Dove River range now includes night and day creams, a range of soaps for adults and babies, and a refreshing tea containing dried peony root mixed with chamomile and peppermint.

But it’s their sensitive skin products which give them their best moments, says Dot.

“We get an incredible buzz out of it when people say it’s working. We know the stress that it causes, particularly on young children, so that they’re coming up and saying it works is such a fantastic feeling for us.”

There’s now research to show paeoniflorin can help with arthritis and menopause so they’ll be doing more research and development over the next 3-5 years. Dot and Georgia confess they find it hard to stop raving about the plant that has become their root cause.

“It’s pretty all-consuming so it takes a lot of your energy and passion and income,” says Dot. “But we are living the dream, and we are living in a fantastic piece of paradise.”

“We get asked ‘do you miss Wellington, would you go back there?’ and we say we absolutely don’t miss it,” says Georgia. “We couldn’t live anywhere else now, and anyway our children are too noisy, we could never live in a built-up area again! They are used to making as much noise as they like and running as free as they like.”

THE CURIOUS WORK OF A FIRST-TIME PEONY ROOT FARMER

When you’re the only people in New Zealand harvesting the root of the peony, you have to come up with some creative farming techniques. For example, how do you harvest peony root on a large scale without damaging it?

“Every single day you’re doing something new that people aren’t doing so you have to work out the best way,” says Georgia. “We’ve looked at different ways of harvesting the root. Last year we had staff who did it by hand and that was a very labour-intensive, painful process. Speaking from experience, it’s backbreaking work.

“But with the volumes we intend to harvest it’s just not feasible to do it like that so we’ve tried using diggers. At the moment we’re looking at using a modified single row potato harvester to actually speed up the process but it’s all experimental.”

Once you’ve got the root out of the ground it must be washed and the outer layer of skin removed, without bruising the root. That’s had Georgia looking at commercial potato peelers and carrot washers.

“You’re trying to mechanise and innovate as much as you can to speed up the process and make it much more effective. It is trial and error – you make some investments in machinery and you have to go ‘woops, that didn’t work’ and put it down to experience.”

The organic dryer they had built is based on one used by a mushroom farm up the road. To be organic it had to be built completely from untreated wood and the end result looks like a sauna room says Georgia.

“It’s all completely lined with untreated timber, and inside the actual dryer we use food grade mesh for all of the peony root to sit on; it’s got a metal floor to it but the rest is all untreated timber to meet those requirements.

“My long-term plan is to move to a solar solution to run it… because it’s very low heat so it doesn’t require a lot of electricity.”