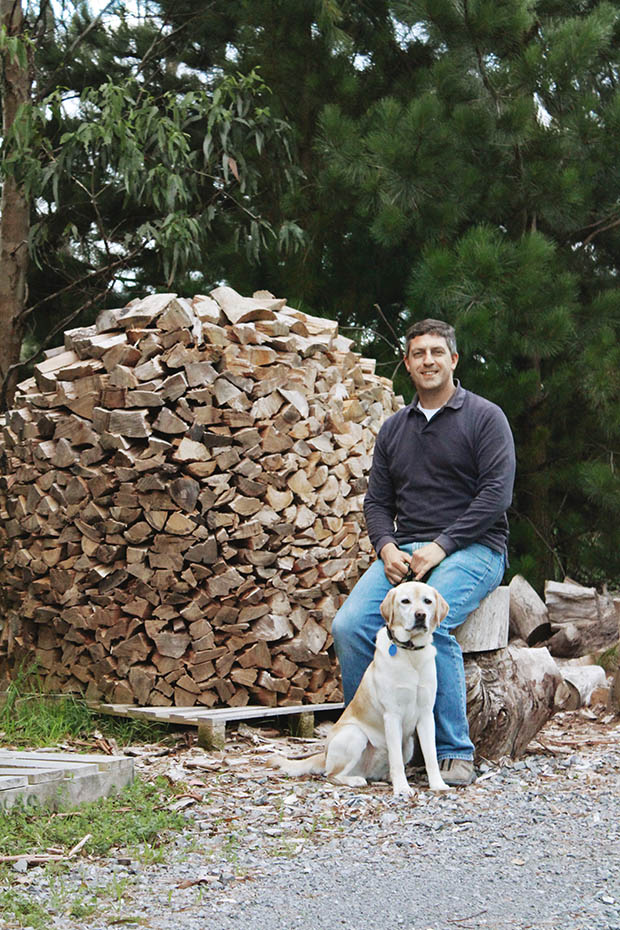 During the week Jason Price is a management consultant and efficiency expert. At the weekend he becomes a chainsaw-wielding, firewood-stacking ninja who also likes efficiency.

The book that inspired Jason Price to write a fan letter isn’t glamorous. It doesn’t have a famous author. For most people it’s a pretty dull topic. But Jason’s favourite book is about chopping, stacking and drying firewood. Efficiently.

There’s something about taking firewood and making it beautiful that has a strange appeal and Jason isn’t alone in his fascination. Half a million people around the world have bought and loved Norwegian author Lars Mytting’s book about firewood. It inspired Jason, who spends most of his time working at a computer, to start what he now freely admits is a fanatical obsession.

“I had three big gum trees and had some professionals in to fell them properly. I’d never owned a chainsaw before. I got a chainsaw! A friend who worked in forestry said ‘I’ll help you with the first one’.

“We did that kind-of massive under-estimation of looking at something and going ‘yeah, we’ll clear that in a few weekends’, and then spent most of last year chopping up gum trees.” 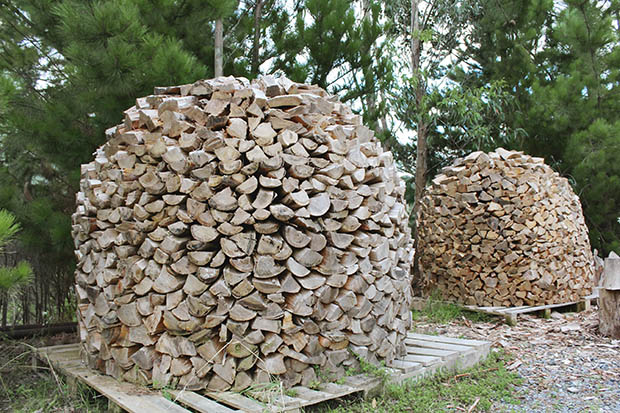 When you have the huge volumes of firewood that come out of the remains of three 20m-high gum trees, you need to stack it and dry it. Like most people, Jason had only ever stacked firewood in rows, but the professional efficiency expert was wowed by a clever technique Lars Mytting writes about, called the Norwegian round stack.

How to build a Norwegian Round Stack

“I thought I’ll have a go at that because that looks like one of the easiest to build. But what’s quite engaging about the book is he’s focused on the stories of individual people. The whole section on the Norwegian round is an interview with a guy who built one on his lawn. He’s not just saying ‘this is how to build a round wood pile’, he’s telling you the story of the guy.” 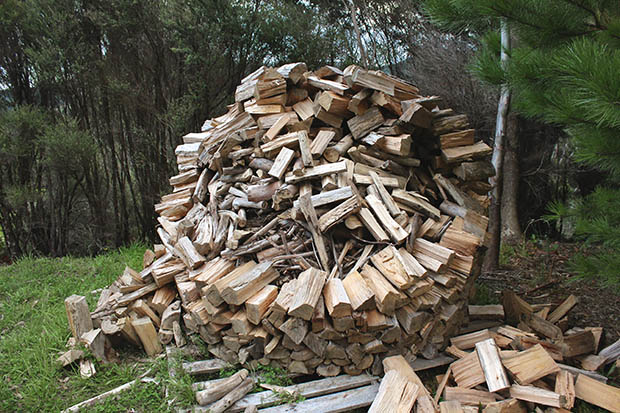 Cross section after a collapse, showing the tricky shaped pieces that fill the middle.

Jason admits when he moved from the hilly, leafy suburbs of Wellington to his dream block a couple of years ago, he had a lot to learn. For example, if a big, turn-of-the-last-century villa in a damp valley with high rainfall has two wood burners, they’re probably not for show.

More stories you might like:
Thinking caps on: Offcut's hats made from upcycled fabric bring sustainability and fashion together

“They’re the only heat source… it’s no longer a luxury feature, it’s actually my primary source of heating the house.”

He realised it was time to get serious about firewood. Mytting’s book fanned the flames of his unusual new pastime.

“I think the thing I found quite surprising about it is I wasn’t expecting it to be fantastic! People were saying this is a great book, you have to read this. Anyone who owns a chainsaw will appreciate it. There’s a really subtle sense of humour runs through it, it probably appeals to the no-nonsense Kiwi attitude, and if you’ve ever stood there in front of a wood burner wondering why it’s not burning like it should, it’s technically useful and interesting. 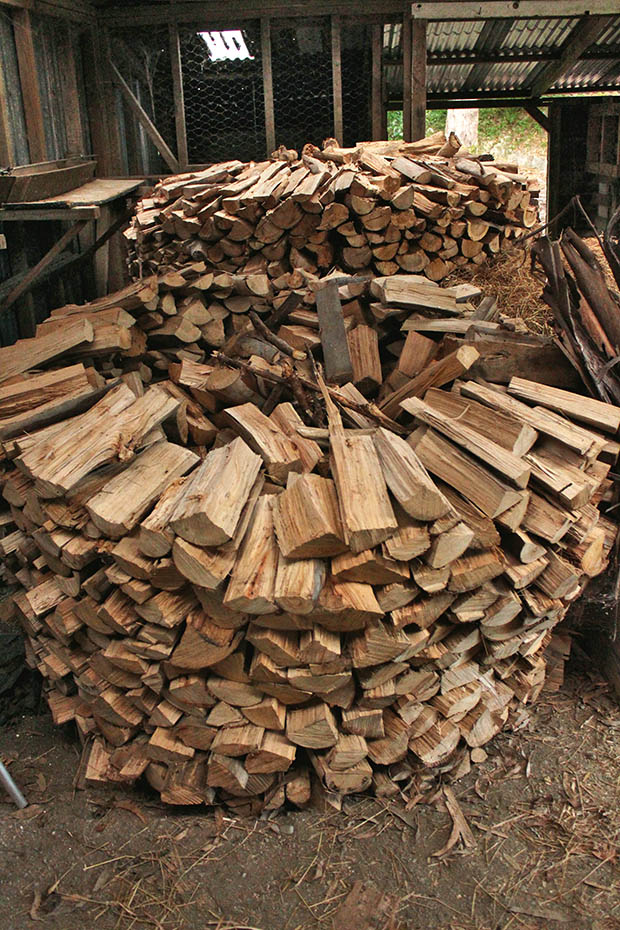 Round 1 was a bit too small and as the wood seasoned and shrank, it has had small partial collapses.

“There’s a whole section on a guy who’s about 90 who’s been chopping wood down all his life. Now he can’t chop the wood down anymore so he’s bought a log splitter and carries on. You’ve got this seasoned advice from wizened old men about how to get the best out of wood.”

Jason learned quite a bit from his first attempt at building the Norwegian rounds that are dotted about his block. Round 1 sits in a shed directly on the ground. As he now knows, it was a bit too small and it has a damp bottom.

“The mechanism for building it is you get some pallets, four small pallets and you make a big square. I’m now always on the lookout for pallets, going past places thinking ‘oh, that would be a really good pallet.’ 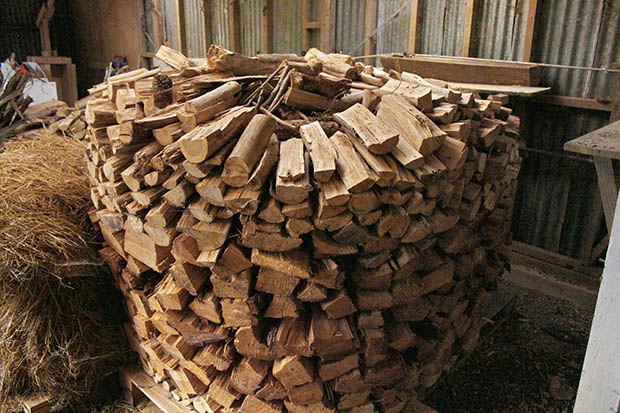 Round 2 was bigger, and is sitting on pallets so is sturdier, and has a dry bottom.

“You just lay out a circle with wood blocks and you just wind the thing up, layer by layer. The first one was a bit too small so as it was getting bigger and bigger, it tended to bow out at the top. As the wood seasons, it shrinks so it’ll have a bit of collapse now and then, it slides, it slightly leans. For the second one I went another half a metre wider and it’s much better.

“I build up to the point where I can get out safely, then build it from the outside so you’re just building around it. Then all the awkward bits, the gnarly-shaped bits, you just chuck in the middle as you go so it’s nice and stable.

“Don’t let it lean out (as you build) because as it shrinks it starts to lean out.

“ When you’re building you have to keep standing back and looking at it and going round and making sure it’s in a circle, but that’s half the fun.”

What’s amazing about building a round wood stack is how much room you save compared to stacking your firewood in straight lines. Jason’s three masterpiece rounds sit on a corner of unused land as you come up his driveway. Each one contains most of the wood from a 20m-tall gum tree.

“If you’re short of wood shed space and you want to store it, I just think it looks great, it’s a talking point. That space on the drive wouldn’t be used for anything else, it’s out of the way under the trees, it’s a dead space, I can’t do anything with it, so why not put three trees worth of storage on it?

“I work in customer service and business efficiency so it’s all about performance improvement and efficiency. I look at it from a slightly nerdy, technical point of view, going ‘now that’s a really efficient way of storing wood’.”

Case in point is Jason’s life before he got a chainsaw. His original firewood supply was 4m³ he bought from the local sawmill.

“It was stacked in traditional rows and it took up half the garage. Now I’ve got a round and it’s sitting in half of that space but it’s neatly packed and it probably contains more wood. I reckon you could work out if you use some basic school maths… it’s 4-5m³ of closely packed wood. It’s not thrown wood, so you’re probably getting the equivalent of 6-7m³ of thrown wood stacked in rows.

“You could get two, two and a half years’ wood supply in your city garage; you could buy wet wood for next year, buy the cheapest wood one year ahead, and then dry it yourself.”

There’s a strange beauty in a Norwegian round and it affects people, even those who deal with firewood all day long.

“Everybody who has come up has said ‘that looks really good’. You get the professional woodcutters coming up saying ‘that’s awesome mate’.

“You could have one in the garden as a talking point – it opens up the wood store that you’d normally want to keep out of the way.”

Jason’s weekends are now very different to his city days. They consist of him assessing pallet suitability when he’s out driving, and dreaming of ways he can use his chainsaw. He’s already watched enough videos on carving to think he wants to turn stumps into art. 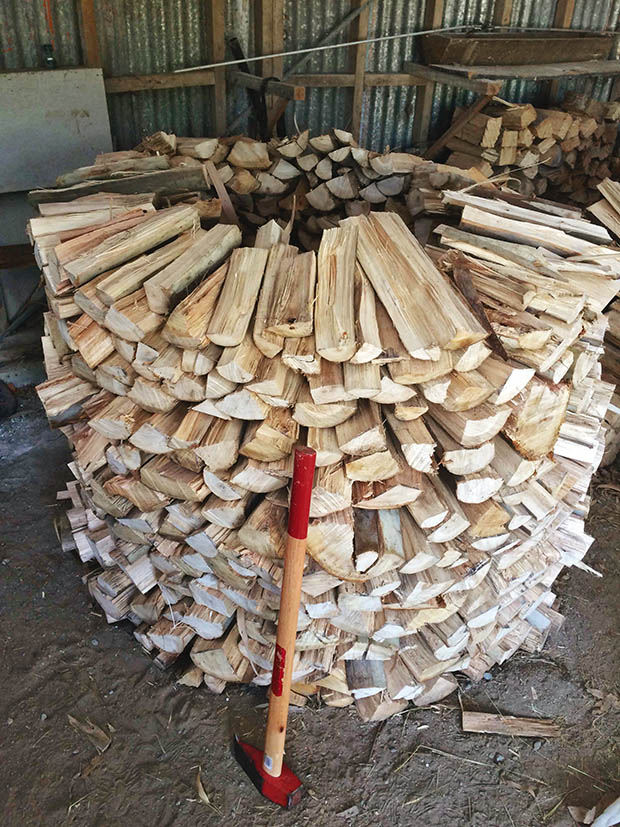 Jason’s first round under construction, but not built on pallets.

“People joke about lifestyle blocks being ‘no lifestyle blocks’. I deal with consultancy projects and there’s a lot of stuff where you can’t really see the result, so it’s really quite nice to get out of the office and think ‘alright, I’ve got to chop some wood, and then build it’. Every day you go down the drive and see it, it’s that sense of achievement from building something. You’re outside and you’ve got days of sunshine and the dog is sitting around helping you. That was the point of moving somewhere rural, it’s something completely different to the office job.

“Now I’m looking around this block and I think I haven’t got enough trees. I want to cut down another tree and put another round up so I’m going to have to start a planting strategy or buy a bit of the neighbour’s pine forest block!” 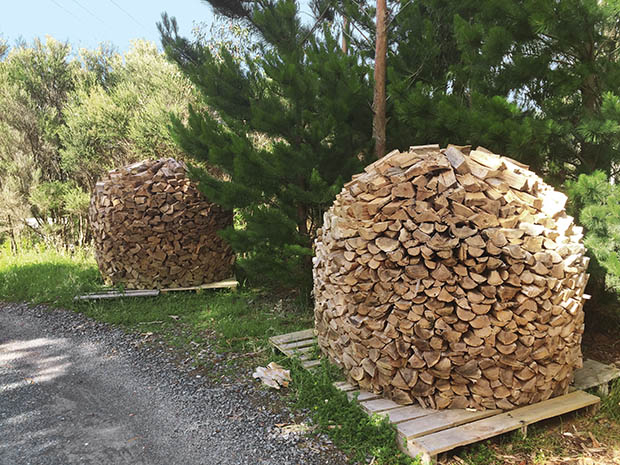 The rounds on an unused corner of Jason’s driveway delight visitors.

1. They’re free-standing, no need to lean wood against anything, meaning it can be put anywhere and isn’t confined to leaning on a wall.

2. It allows the wood to dry and season quickly thanks to its porous design. “Lars says in the book it has to be loose enough that a mouse can run through the middle. You’ve got this airflow, you can stand on the other side of the wood in the wind and you can feel the air coming through it, so it dries really efficiently.”

3. Pallets on the base keep the bottom dry.

4. The top layer can sit bark-side up to create a ‘roof’ but Jason has found it sheds water very well anyway.

5. It’s a very satisfying thing to do. “My favourite passage from Lars’ book is where he says: You know exactly where you are with a woodpile. Its share price doesn’t fall on the stock market. It won’t rust. It won’t sue for divorce. It just stands there and does one thing: it waits for winter.”