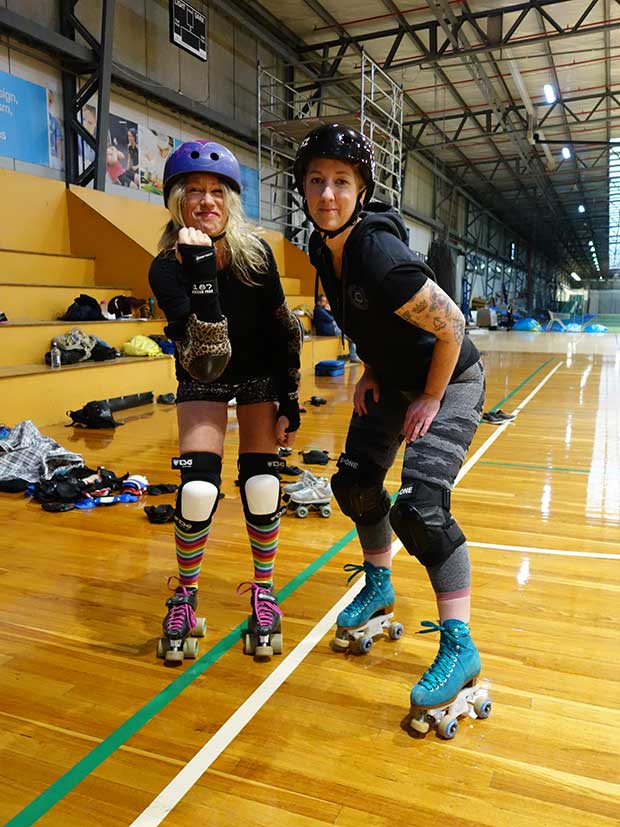 Lisa Scott gets her skates and her badass attitude on at the roller-derby rink.

Dunedin Derby is home to the world’s southernmost A-team, the Gallow Lasses.

Freshmeat intake is held yearly and we freshies walk in to the Edgar Centre as the Lasses are walking out of their own training, marshmallows passing walnuts.

With the slogan ‘meet new friends and beat them up’ this could well be the perfect sport for me, a person with an untapped reservoir of rage and violence. Only problem being, the last time I donned a pair of roller-skates, I broke both bones in my right leg.

However, I was skating home drunk from a party at the surf club wearing a skin-tight red cheongsam. Sober and dressed in less restrictive clothing (sparkly hot pants), I wasn’t too worried about repetition. That leg is titanium from the knee down now making me a bit like The Terminator – except I don’t come back. 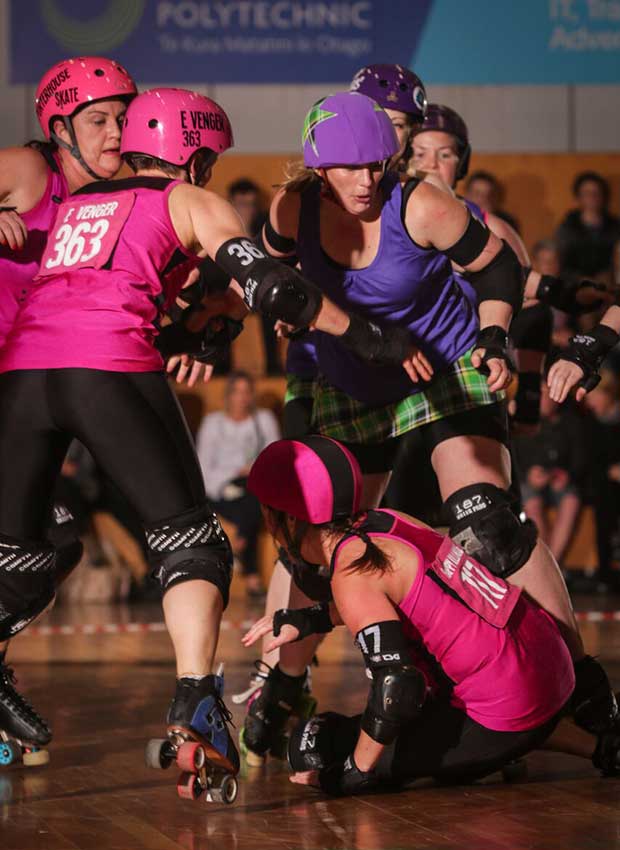 First, a disclaimer. If your reason for playing roller derby is because you’ve got a thing for fishnets or you think it will help in your quest for this week’s must-have fashion accessory – bruised legs – you might want to check yourself before, as they say, you wreck yourself.

Derby is too intense (time, energy and cost-wise) to be anyone’s brand-new favourite thing for a few weeks.

Because this is a sport. A team sport. And everyone knows writers don’t play well with others. Just look at Joyce. Complete jerk.

I’d cut my fingernails the night before. “Have you got a mouthguard?” asked my boyfriend, who wasn’t skating because derby is one of the few sports with a gender bias. “It will be hard to continue your line of work without teeth.”

More stories you might like:
The ancient art of glamping: Why Kiwis are returning their camping roots at Nikau Sanctuary in Raglan 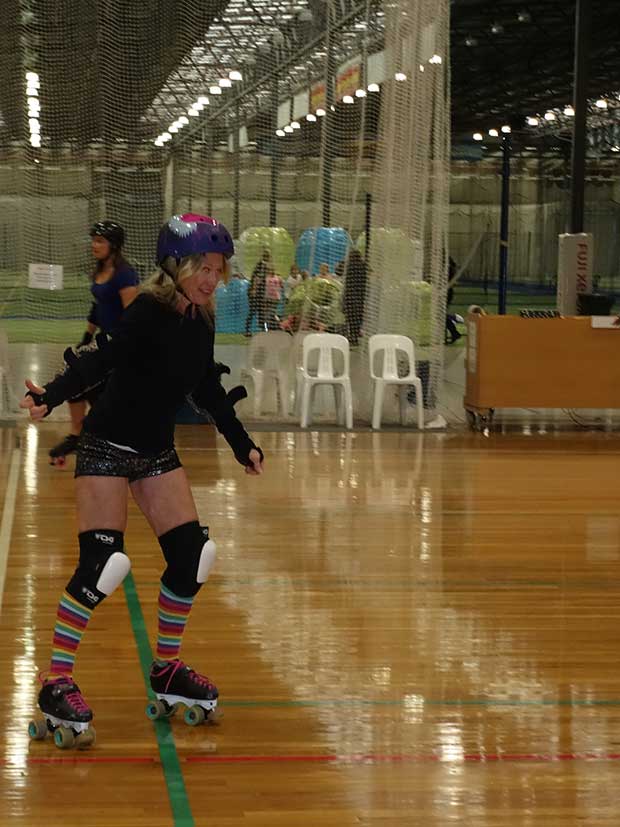 The organizers had reassured me there wouldn’t be contact (other than with the floor) at this early stage of the proceedings, but my friend Rocket Queen, a 10-year veteran of this bloody sport, offered to teach me some moves so, if I was of a mind to, I could smash someone.

“Basically, we adhere to the Women’s Flat Track Derby Association’s rules,” she explained. “Minimum skills are built up in the first three-month block of training: how to stay on your feet, stop, fall, turn around, all important before someone sails in and hits the shit out of you.”

People’s real names disappear in Derby Land. Rocket and instructor Lady MacDeath are addressed by their Derby names alone on the rink, “and in 80 percent of my life,” says Rocket.

“It’s super weird at the supermarket. Derby insinuates itself.” I had imagined women with faces like Soviet brutalism but that wasn’t the case. Rocket says girls go from withdrawn to outgoing and bubbly after taking it up and I could see it happening even in this first session.

Young women, many with the ladder-rung scar tissue of self-harm, donned helmets, pads and skates and, even wobbling up and down, arms out like babies learning to walk, or taking a knee Al Jolson-style to stop, were transformed into smiling, laughing kamikazes that got up as fast as they fell down.

Amateur and self-organized (otherwise they would potentially have to surrender their fabulous names, something that has been hotly debated in the international derby community when discussing the push for it to become an Olympic sport),) roller derby is run by volunteers. 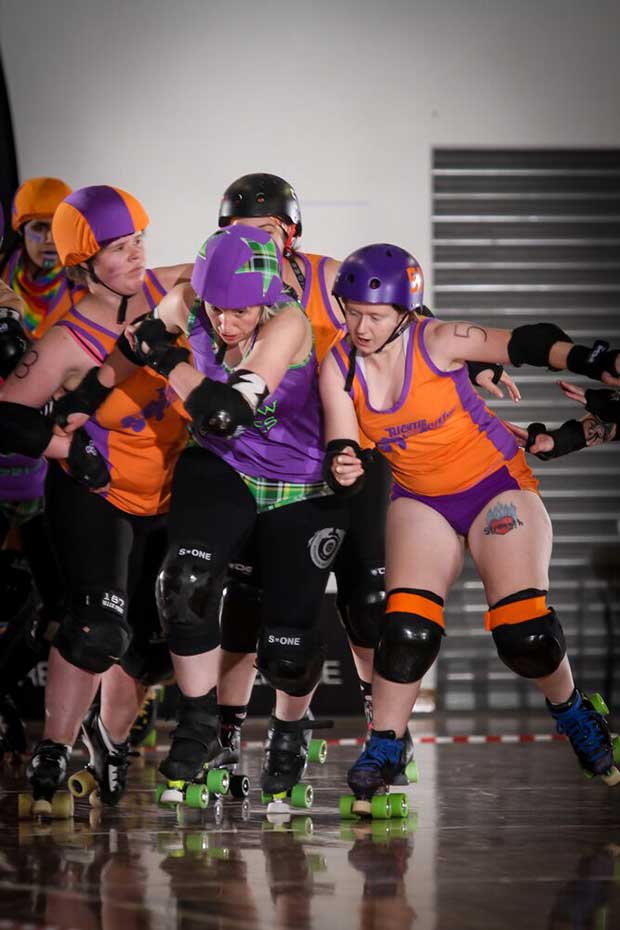 It’s not a cheap kit-out: skates, elbow and knee pads, wrist guards and a helmet will set you back more than $1400 but the second-hand gear trade is pretty good. Men do play “but more like cones”, individually and for personal glory, while women play strategically.

More stories you might like:
How this French traveler became a proud tiny-home owner in Burkes Pass

Plus, they hit differently, have hips and butts. One American player, Beyon-slay, is famous for an ability to lift and toss opposition players across the court with her rear end. I bash Rocket with my hip and carom across the court. Derby girls have asses like brick walls.

Derby is heavily refereed: three on the outside, two on the inside, “There’s a lot of ‘strategy’ going on.” The most common injury is an ‘ass-winding’ – landing on your tailbone forcing a fish mouth grimace ‘up up’ out of you; the most painful: landing on a wheel. “It’s the worst bruise I ever had that nobody saw,” says Rocket. Time for my Derby name. It should reflect your personality and be humorous yet mildly threatening. I liked Busta Tibia, but Mia Psycho’s Roller Derby Name Generator (rumandmonkey.com) came up with Billie Cut Throat.

Skating in ovals around the court, occasionally skating backwards now I remembered how, I could feel pressure in my old break, but I also felt like Jacinda Ardern must in a roomful of grey-haired walruses: powerful, able to roll right over life’s moronic minutiae.

“You’re a natural,” says Rocket. Faster and faster, ploughing through the fallen, I swerve, court hog, became shouty and aggressive. Forget the old adage about alcohol bringing out your true personality, get me on eight wheels and you know I’m a derby girl.

WHAT IS ROLLER DERBY?