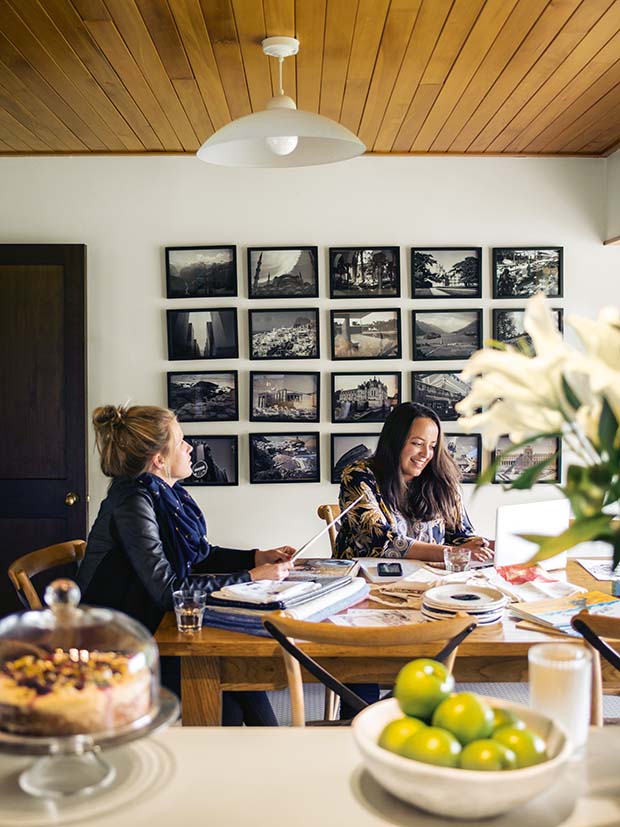 Sarah with Bex (left) at Sarah’s kitchen table at Dome Hills. The kitchen is often used as a makeshift office. While Sarah may now be many miles from her old life in London, her memories (captured in framed photographs) are never far from sight. The plates are Sarah’s own creations.

From two sprawling high-country stations on either side of the Waitaki River, two young and creative rural ladies are empowering and connecting like-minded women.

A network of crossed paths led Sarah Douglas and Bex Hayman to farms with unreachable horizons, and to each other. Despite growing up at opposite ends of the country and with different careers – one with a microphone in hand, the other with colour swatches and interiors magazines tucked under an arm – they found themselves tripping over one another in the most unexpected of places. 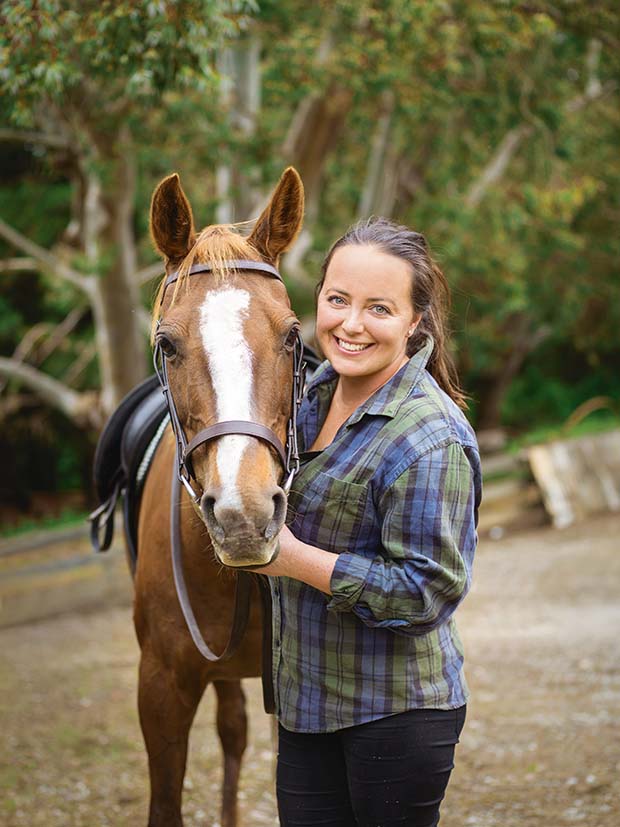 Introduced as friends of friends at a university party in Auckland, they went on to spot each other across a crowded London street and later bonded as rural women learning the ropes in Kurow. It’s a predetermined friendship that could have been written in the stars.

Reinventing themselves as young rural ladies was never on the cards for either Bex (nee Murray) or Sarah (nee Connell). But when both fell in love with farmers disguised as bankers – dressed in business suits but with Stubbies in their heart – the back blocks began to look rather appealing. 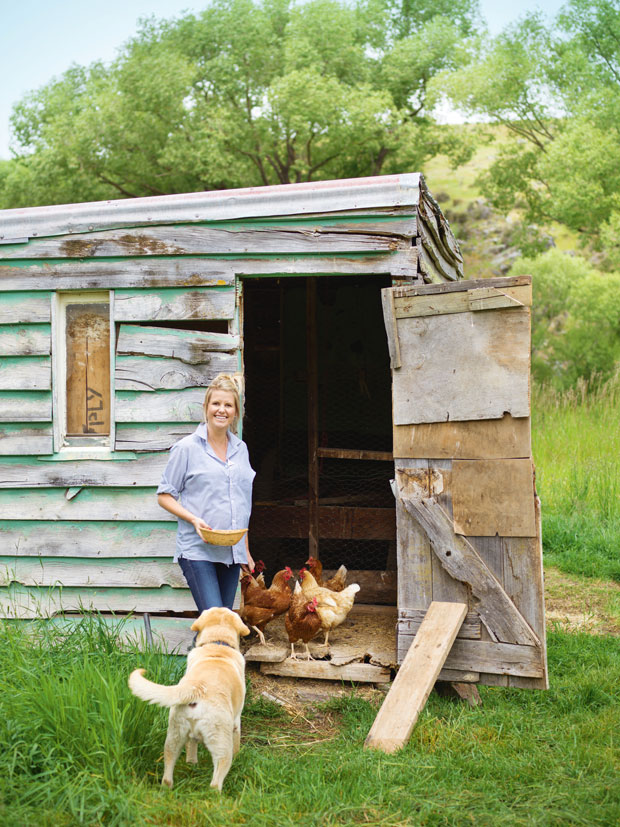 Both had careers that allowed them to wander past the city limits; Bex as a country/pop singer who released an album (Heart That Talks) and opened for Creedence Clearwater Revival, the Hollies and Bonnie Tyler, and Sarah as an interior decorator and magazine designer.

So when their soon-to-be husbands proposed not only a life together but also a life on the farm, they packed their bags, their laptops and their Red Bands and started life “just down the road from each other” (only in the South Island is 100 kilometres considered such). Wrangling seven dogs is generally utter chaos, says Sarah (with husband Dougie). Herding cats would perhaps be an easier task. All the dogs but one earn their dinner by working but are mainly treated like pets and love their morning strolls (or runs, rolls and chases), although the views over Dansey’s Pass are wasted on them. The exception – Frankie (barking) – is pure pet; while the outlook is worthy of a painting, this spot is barely midway up the farm – Dome Hills stretches for kilometres further into the valley.

Between gigs for Bex and decorating jobs for Sarah, both took to country life with gusto – training dogs, creating and growing gardens, hosting parties and honing their cooking skills so that less ended up as feed for the chooks. What didn’t come naturally was learnt through hard work – and it was this tireless creative energy that brought Bex and Sarah together to launch a business. 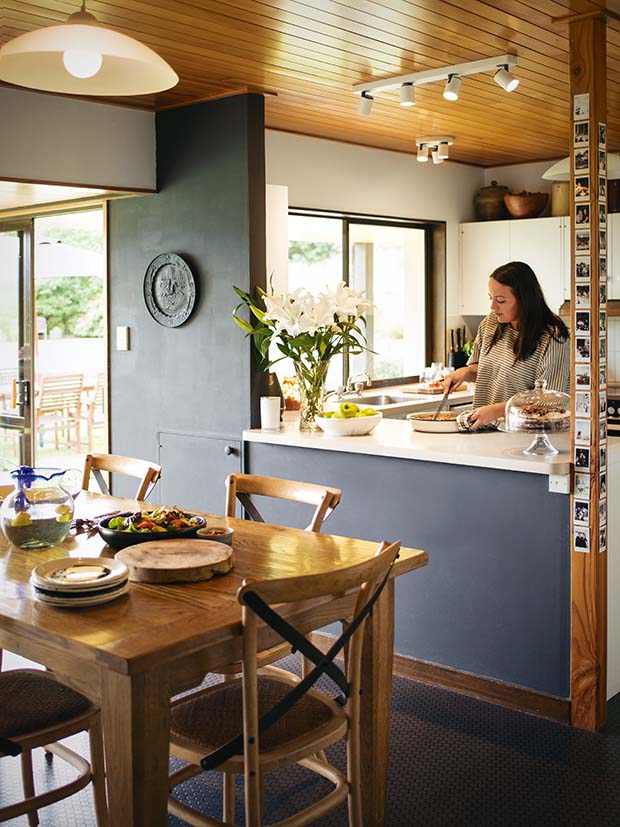 Their Facebook page Young Rural Ladies, created in winter 2015 as a place to trade recipes, farming stories and share DIY projects, grew quickly. The audience? Women throughout New Zealand on farms large and little. Some in small towns where the main street is Main Street, others hours from the nearest off-kilter road sign. Some born and bred in their region and others, like Bex and Sarah, who’ve moved from larger towns for love and the land. 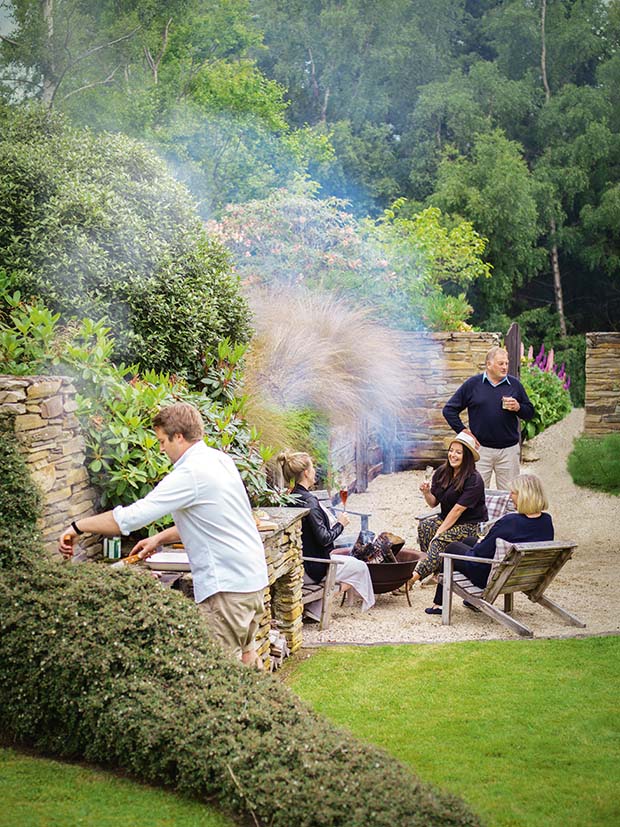 Bex and Dougie’s parents David and Cindy join Sarah and Dougie for a meal prepared on the schist barbecue built by Dougie’s grandfather more than 30 years ago.

All experience isolation, whether it’s measured in distance or in finding their feet in an unfamiliar new world.
“The Facebook page encourages other women to share their lives. It’s fun, inspirational and showcases women making the most of rural life. We don’t try to be professional bloggers; we want it to be refreshing and easy to relate to.” 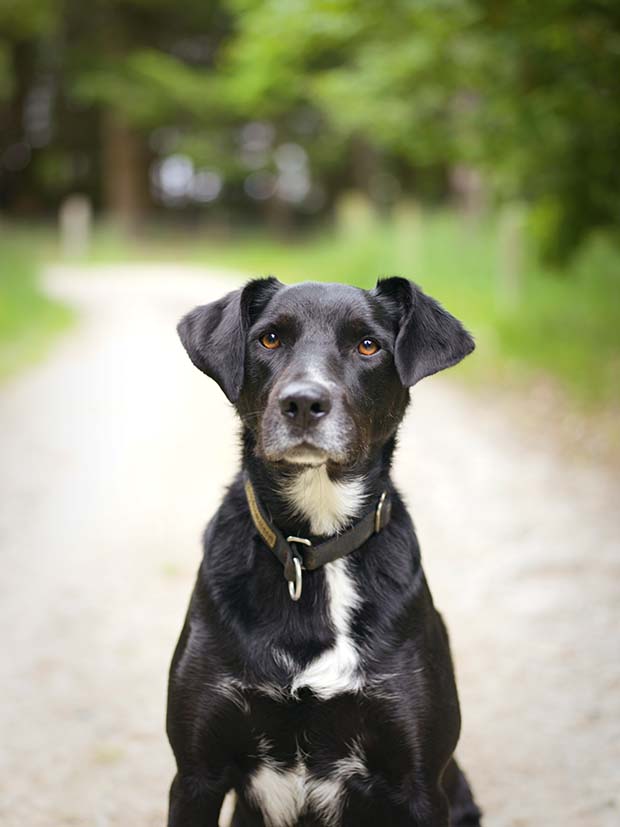 Frankie was a gift from Cindy and David when Sarah arrived at Dome Hills.

The duo has stumbled upon a new generation of rural women. The multiple hats worn by farming women have always, and do still, bend the sturdiest of hat stands – chef, child-minder, animal wrangler, manager, builder, accountant, gardener… a rural woman’s CV runs longer than her fortnightly shopping list. 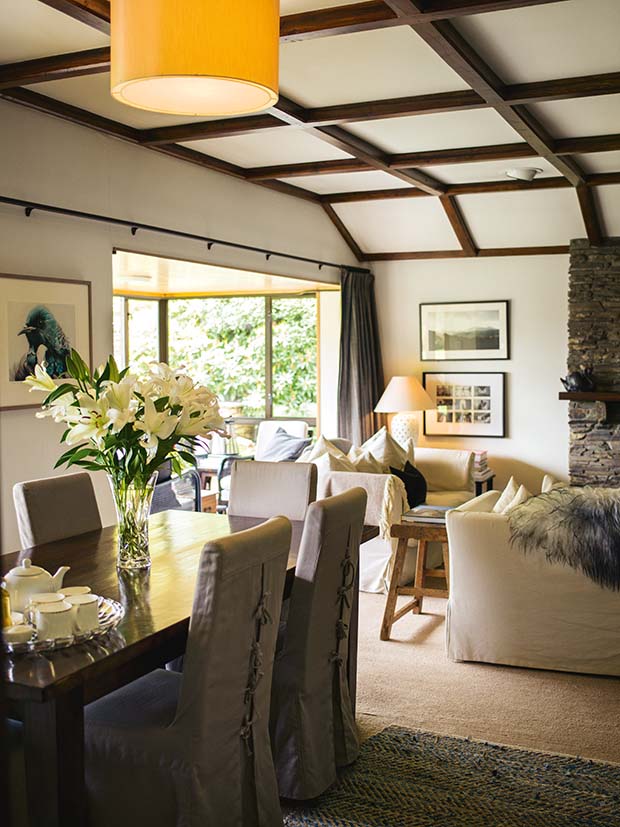 The Douglas’ home was built in 1980 and designed by Mason & Wales Architects. Two generations have lived here, and each has left its fingerprint.

However, the typical “farmer’s wife” is an outdated stereotype. Their helping hands are as busy as ever, building businesses and income from home offices, gumboots left at the door.

“We discovered so many amazing people creating businesses from their farms and started promoting them on the Facebook page to support them,” says Sarah.

“It formed the idea for The Marketplace, a recently launched online store (youngruraladies.com) that stocks the products made on farms all over the country. Everyone wins. The audience loves it as they are buying from like-minded women. We’ve created something for ourselves and it also helps support small businesses.” Having had a past life as a lodge, the Douglas’ home was fairly well furnished upon their arrival
but the couple have added touches of personality thanks to Sarah’s well-honed sense of style and some beautiful wedding gifts. The silver soup tureen on the cabinet was a wedding gift from Dougie’s grandparents.

The online store has also given both women an opportunity to flex their creative talents. The Marketplace stocks Whistle and Pop, a limited range of jewellery designed by Bex and crafted by a local artisan. The main piece, a dog whistle on a chain, was inspired by an 18th birthday gift and is what husband Tom received instead of a wedding ring – perhaps the only time the phrase “with this whistle, I thee wed” has been uttered in the Church of the Good Shepherd. As for Sarah, the hours she has spent practising at the pottery wheel won’t be in vain – she has plans to create a pottery line. To be called Frankie Ceramics, it will be an extension of a love of home wares that blossomed during her days as a graphic designer at NZ House & Garden. 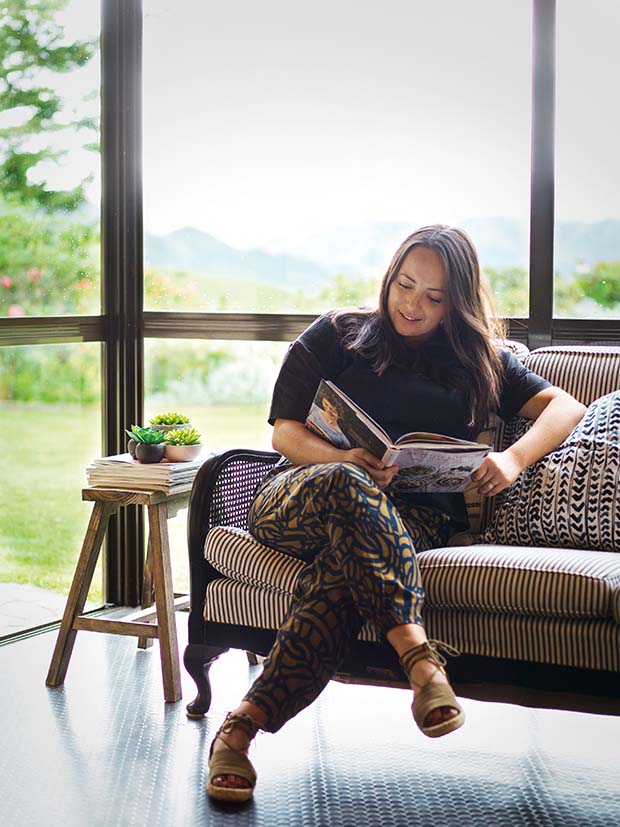 Mother-in-law Cindy has helped Sarah to add a few modern touches. Cindy spray-painted the wicker sofa  black to match a wall in the dining room that Sarah decorated with chalk paint.

“We could expand and get more people involved but for now, we want our business to work for us,” she says. “When we have families, one will take up the reins, then vice versa. The Marketplace launched in December so it’s early days but we love it – every order is exciting. When you buy from a small business like ours, just know that someone out there is doing a happy dance.”
As Bex’s first child arrived in January, it’s currently Sarah dancing around the office for the both of them. Husband Dougie (actual name Ben) just laughs. The pair was introduced in Dunedin while Sarah was on a weekend’s holiday from Auckland. It wasn’t long before Dougie joined her in the big smoke, working in corporate analysis banking while Sarah nourished her love of interiors at NZ House & Garden. 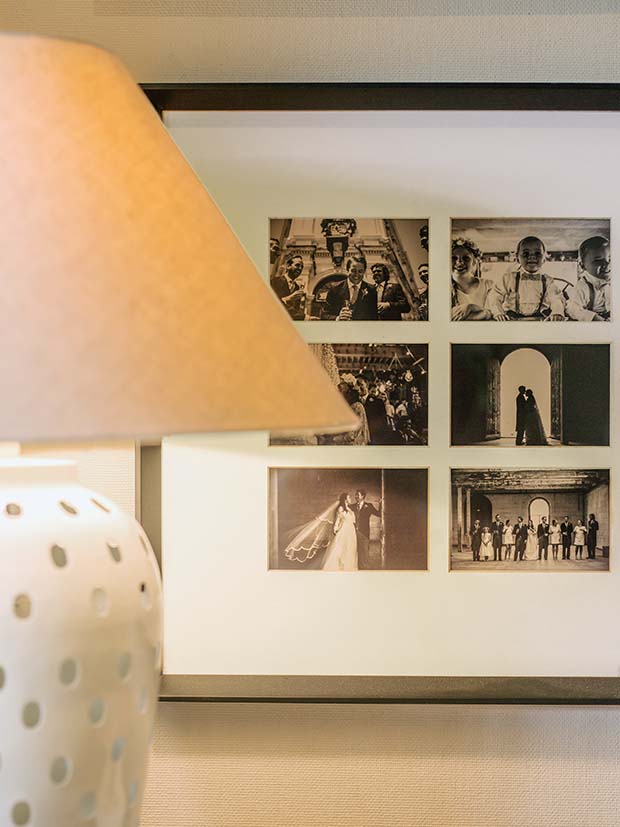 Wedding photographs of the couple who were married in January 2016 at the Loan & Merc in Oamaru, an old grain store turned venue.

Three years in London followed, where Sarah studied interior design and worked on luxury magazines. Then one day, the gloss of London faded. Friends started moving home, jobs lost their lustre and an idea started to form.
Sarah and Dougie moved to Dome Hills in 2014 for a 12-month trial period.

It’s ongoing. They’ve settled into a home just a few hundred metres from Dougie’s parents that was built for his grandparents before being used as a lodge. 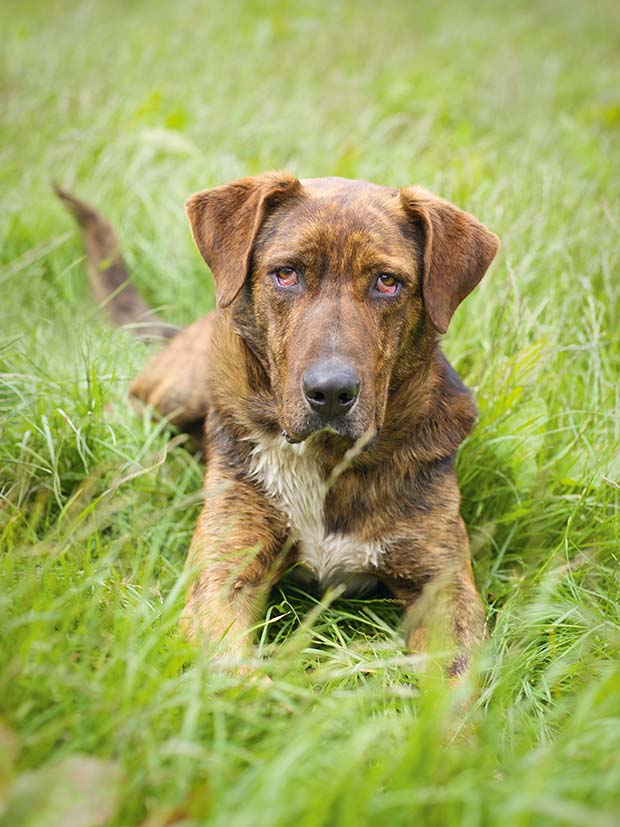 Both have had to adjust to farm life; Dougie works on the station alongside his father and is still mastering the classic farmer skill of pinpointing exactly where to stop the ute when opening farm gates, while Sarah pitches in between interior design commissions and her online work.

Dome Hills is a mix of sheep, cattle and crops. Friends come often and happily, bringing with them a fresh enthusiasm for rural life. The role of the hostess is one Sarah embraces – loving every opportunity to style a beautiful table. “We entertain now more than ever – when people come over it’s all up to us.” 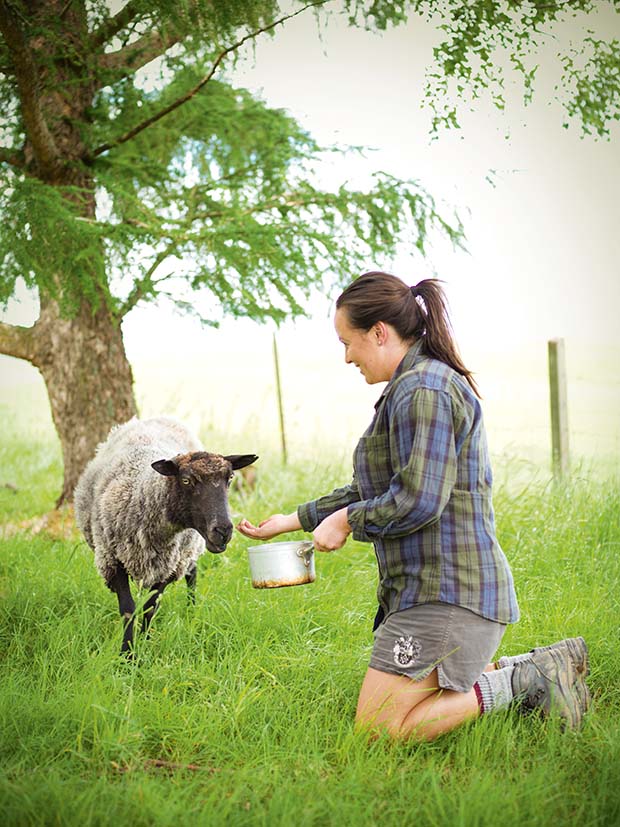 The black sheep are favourites of Cindy and Sarah’s. The ewes (including Michelle Obahh-ma, above) are brilliant lambers, and currently wearing coats that are to become handspun, all-natural black tartan crafted by local artisans McLean & Co. Hopefully the fabric will be for sale on The Marketplace under the name Black Yarns later this year.

She means it – a recent dinner party for 18 inspired her to create her own dinner set – which barely survived Dougie’s driving on the way home from the kiln. On hearing what sounded like breaking pottery after a particularly enthusiastic corner, he thought their marriage might also be in pieces. 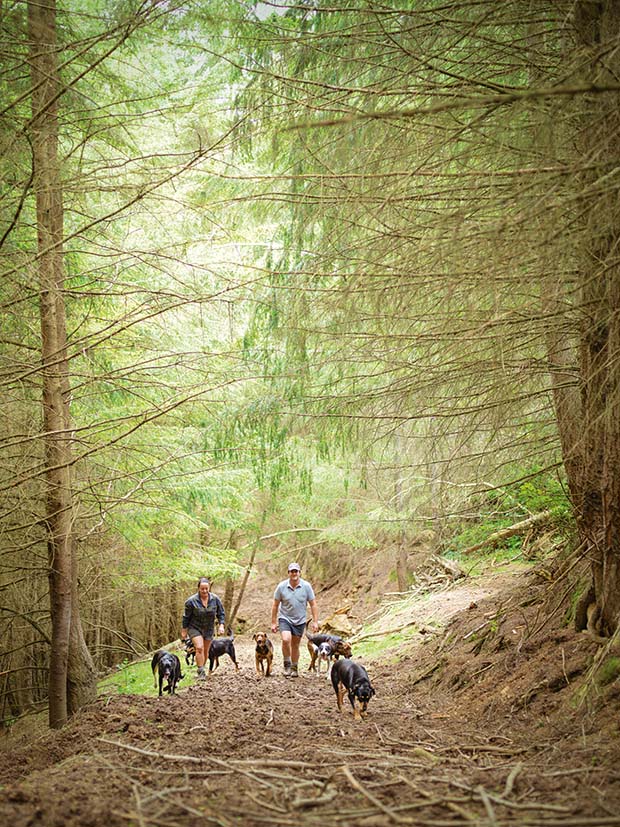 Luckily disaster was avoided not only for the plates, but also for Dougie, who admits that returning to run Dome Hills Station wouldn’t have been on the cards without his partner-in-crime.

“Returning to the farm wasn’t in our long-term plan, definitely not. But we love it and doing this with Sarah makes it so much better – she’s a girl from Auckland, but I truly need her here.”

Use Facebook. It took 18 months to build our Facebook followers to about 7000. We weren’t buying fans or putting money in; it just grew organically. This audience gave us the foundation upon which to build the website. Don’t underestimate the power of social media – it provides the connection to an audience of like-minded people. We’ve now started investing money into Facebook.

Ask for help. We couldn’t have done it without lawyers, accountants and a web developer. We made sure we set the foundations before getting too big. We’ve had to invest, but it’s worth it in the long run. Until recently it was an expensive hobby, now it’s a business.

Set the tone. We’ve kept our writing casual – like we are chatting to our friends. It’s a community. We try to make sure the posts benefit people – they want to feel they’ve gained something.

Just do it. Anything is possible. Now that we have people signing up and putting their trust in us it makes it real. We are starting to realize that we’ve created a business from what was just a Facebook page.