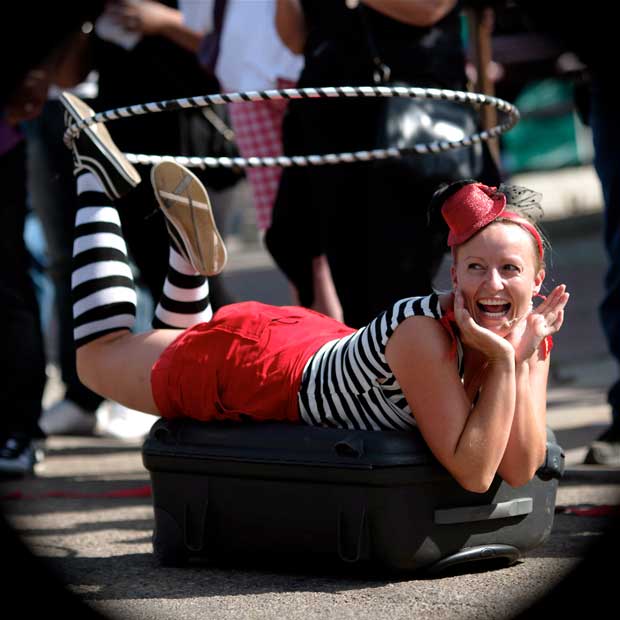 She has dangled from a high wire 46 metres above the street and appeared on TV and in a movie. She’s fun, funny and, when she’s not flying around wearing a ridiculous cape and achieving acrobatic feats, she’s shooting hoops straight from the hip over human targets. Petite and perky, Toni Smith is one cheeky, talented New Zealander.

While home for Toni is Christchurch, this bona fide citizen of the world has earned an impressive reputation as a street performer and circus artiste. Thomas Scott, programme director of the Edmonton International Fringe Theatre Festival in Canada says, “Toni’s stage show is dynamic, fun, unique and one of the top acts in the world…”

Her repertoire includes comedic hula hooping which, she says, involves “climbing on people while making saucy jokes that the kids don’t get”. They get the prat falls though, so it plays to two levels – the wordplay for the adults, the physical comedy for the kids. Everyone enjoys the hula hoops. 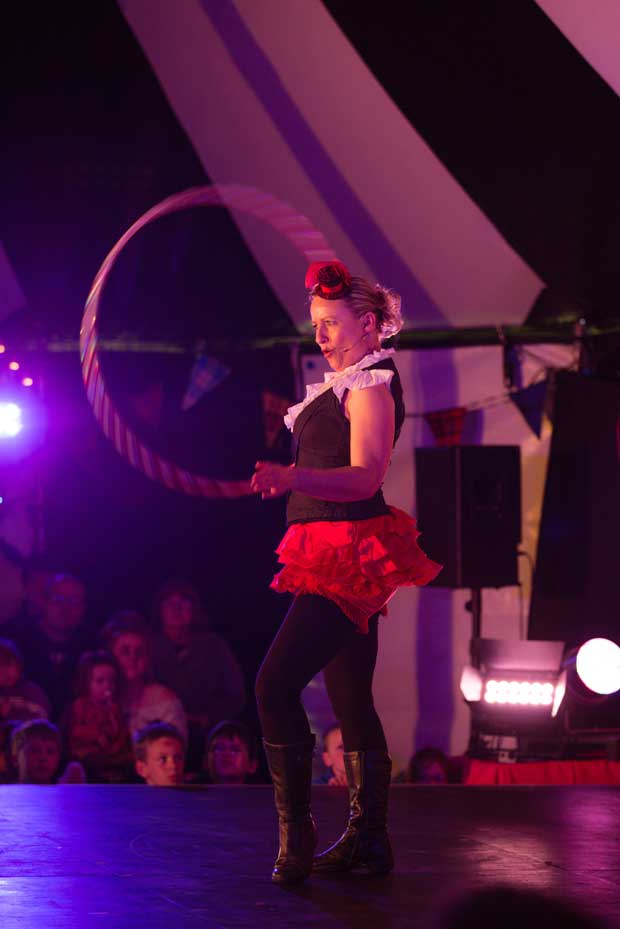 Toni became hooked on the circus arts and street performance in her late teens. “I had recently left school and CircoArts was being set up.”
She learnt acrobatics, trapeze and tightrope. “I thought it would be fun for a year, but I carried on. A surprising number of people from my time at CircoArts are still in the business.”

When she was in her early 20s, she learnt to hula hoop because “the props were portable and I wanted to be a busker.” She put an act together and ran away with the circus with her then husband. “I learnt street performance in Germany.”

More stories you might like:
Hinerangi Raumati-Tu’ua on the value of elders, cultural values and making room for Māori to be part of leadership

Since then Toni has worked all over Europe and Canada as well as in places you might not expect to find street performers, like Fiji and Iceland. She has been on stage in the Shetland Islands where she was looking for family connections dating back to the 1500s.
“As I was approaching Fetlar, the ferry captain printed out my family tree and discovered that he and I were distant cousins. There were 60 people living on the island and two thirds of the population – 40 – came to my performance.”

About 12 years ago, Toni left the circus to return to study. She graduated from the University of Waikato with straight As in the sciences, majoring in biology, psychology and animal behaviour. Then she returned to street performing with a refreshed emphasis on verbal humour.
Most recently she performed with a family-run community group called Let’s Circus in England doing an outdoor spectacular – a mash-up of The Nutcracker and The Greatest Showman.
“I was a hula-hooping Sugar Plum Fairy on top of a huge mirror ball.” 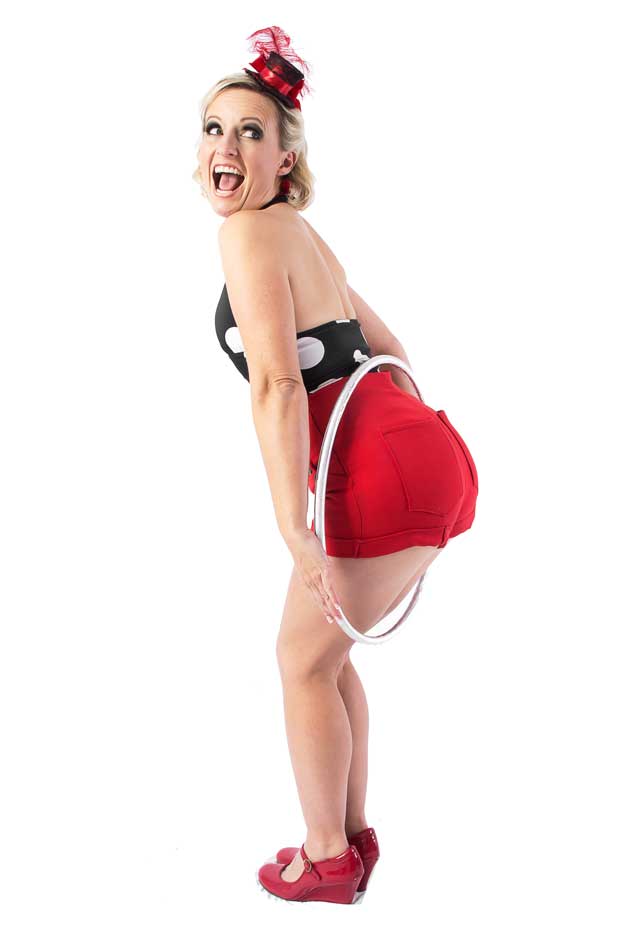 Circus and busking work account for only part of Toni’s CV. “I enjoy skiing and became a ski instructor in Canada. It cost me more than I earned from it, but it was a teenage dream fulfilled.”
She’s also a part-time animal behaviourist/dog trainer, which fits in well with housesitting stints.

After the World Buskers’ Festival, Toni will stay in Christchurch a while to reconnect with her immediate family.
“England is cold and grey at this time of year and dark at 4pm,” she says. “I need to be where it’s bright and warm. I need a feed of green-lip mussels and Vogels.”

She’ll no doubt return to Canada or the UK once the summer here fades but when she’s had her fill of hulas and humour, she’d like to resume her academic studies and qualify as a counselor or psychologist.
“I’m really lucky to have traveled the world and I like to think I can spread a little joy and happiness around with what I do.”

The Circus Circuit: is it for you?
“Yes, if you can work very intensely for short periods and then keep moving. It’s like gambling – you never know when you’re going to win. When all the stars align you feel great but when there’s a long period without work, it’s really tough.
“Street performing is more organized than it looks. It’s largely self-governing but many cities have a permit system so you need to arrange your pitches (the places where you do a street show outside of a festival) and you might need to have insurance – that sort of thing.
“It requires others skills in addition to that of the specific performance: like crowd management, public speaking, salesmanship, quick thinking, and adaptability. It requires self-confidence and a lot of gumption.
“You need to be able to live on very little money at times. And even if you’re good at all that, if you have a long break, it’s hard to get back into. So yes! If you’re fit and supple, yearn for adventure and the thrill of living on the edge, street performance is for you.”

For more info, see The Toni Smith Show at breadandcircus.co.nz

More stories you might like:
This Auckland mum studied the Spanish shoe-making industry before launching children's shoe brand Pretty Brave
Discuss This Article