Christopher and Susanna Grace, both well-known in the farming and horseracing industries, downsized when they moved from their Hunterville farm to the Kāpiti Coast. But they continue to live as if just out of the starting gates.

On their previous property, Rathmoy, the Rangitīkei farm on which they raised their three children, Christopher and Susanna Grace could stride in wide, open spaces before reaching a boundary. Now, at their seaside Raumati home on the Kāpiti Coast, they’re unlikely to exceed two dozen steps before they reach the beach.

The transition from a busy farm to the breezy beach five years ago has gone well. Christopher admits it was a wrench to leave the 800-hectare sheep and beef farm where he was born, raised, lived and worked for 76 years, but the move doesn’t mean he’s out of farming. “I’m tired, not retired,” he says, adding he nips up to Hunterville for one or two days a week with 11-year-old labrador Max along for the ride and happy to be back on the farm. 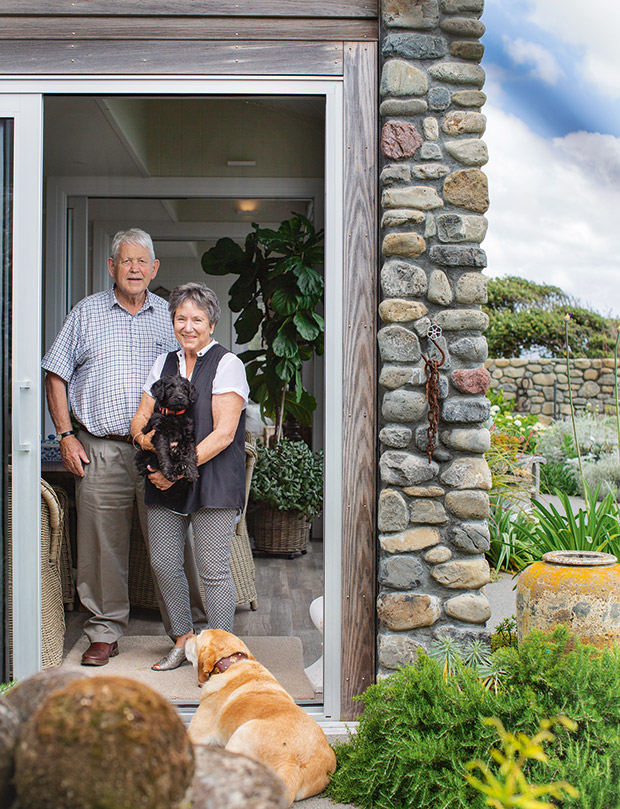 Christopher and Susanna Grace’s Raumati Beach home is named “Hakawai”, or “Dancing Water”. Hakawai is also what Christopher Grace called his first racehorse, a yearling he bought when he was 21. It’s entirely appropriate that the moniker is extended to their Kāpiti Coast home, only a few metres from the hustling Tasman Sea.

When back at Rathmoy, Christopher and Susanna no longer stay in the homestead, as that’s where their son Mark, his wife Andrea and three children now live. Instead, the couple is comfortably at home in an onsite guest cottage by the lake with views over the garden, which they created during the decades they lived there.

At 81, and even while domiciled off the farm, Christopher was no gentleman farmer, although he’s every inch the gentleman.

“I still very much manage the land. At seven o’clock this morning, I was sent an email about weeds in a certain paddock, and I will have to sort it out. So next time I go up, I’ll have a boot-full of agricultural spray. But it is what it is…” His smile confirms he’s not unhappy about that, nor about splitting his days between Hunterville and Raumati Beach. 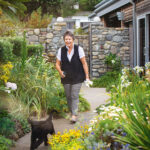 Over the five years they have lived here, Susanna has built a lush coastal garden with the help of several tonnes of topsoil, constant feeding, and careful selection of plants that don’t mind sea salt. Stonework is also a feature, chosen for its low-maintenance and “imperfect” look. 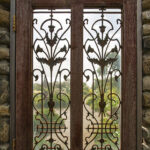 Perhaps that’s because the Graces have fetched up in a jolly lovely spot. It’s a beachfront property with an “infinity lawn”, says Susanna of the roll of green that, from the house, seems to stretch out into the Tasman Sea with Kāpiti Island peeking into frame from the north. “On cool, clear evenings, we can see the South Island. We look straight across to D’Urville Island and French Pass. The sunsets are glorious,” says Christopher.

It was quite a find. When the Graces began thinking about moving from Rathmoy, Christopher set Susanna the task of finding their next place to settle. “He said to me, ‘When you drive home from Wellington, why don’t you turn left every time?’ I did that for quite a while and saw some amazing little beaches, but suddenly I saw this spot in Raumati. I went home and said, ‘I think I’ve found the place that I’ll finally take you to look at.’”

Says Christopher: “I came here, stood looking at the sea and said, ‘Well, if I have to go anywhere, I’ll come here.”’ 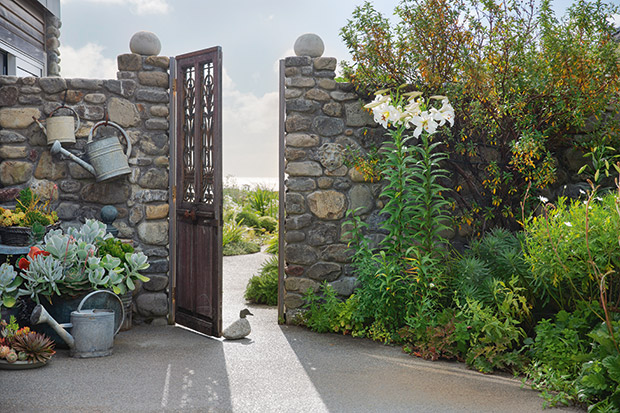 The old French door leads to the garden and onto the beach. The courtyard is a suntrap where Susanna’s succulents thrive.

And so here they are, in a new house designed by a friend’s son, Mike Evans. “I didn’t want a modern house,” says Susanna. “I wanted a house for my old junk, for all this stuff I love. We inherited a lot of lovely things — well, I think they’re lovely. We planned the house around the furniture — I measured everything I wanted to take [from Rathmoy] and designed a special spot for it. It was all part of the fun.”

By any measure, the pieces decorating the Graces’ home are lovely. Antique, yes — old, certainly. Each one has an origin story — the paintings in the entrance hall, the horseracing cups won by both Christopher and Susanna’s forebears, the antique sideboards and chairs that glow with the polish of age, and Susanna’s grandmother’s rocking chair that looks frail, but which Susanna loves sitting in. 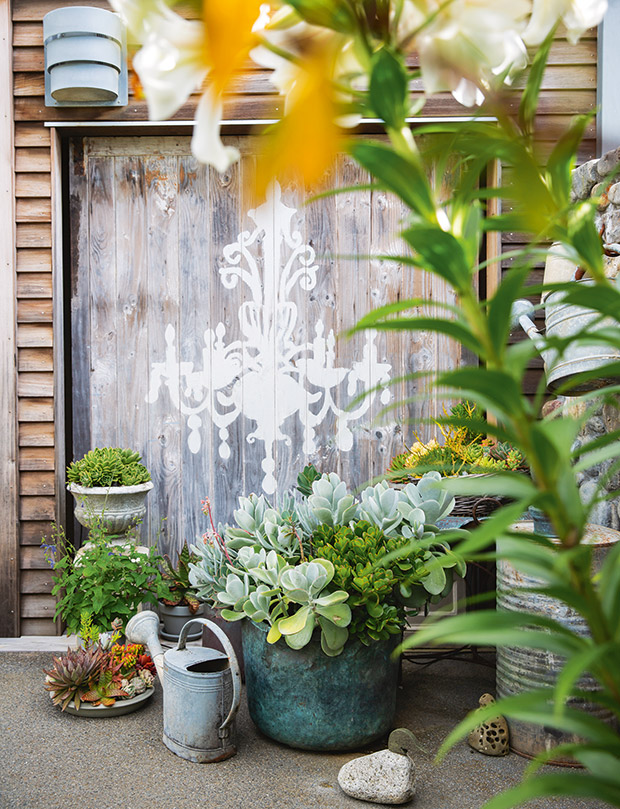 The majestic bust of Julius Caesar and the nearby marble plinth have a great story. “These are the only two things that survived the fire in the original Rathmoy homestead when it burned down in 1947,” says Susanna. “And they only survived because they’d been taken to a second-hand shop. ‘Who’d want these?’ the owners clearly thought. But after the fire, they were hastily collected.” And now they sit in Grace’s entranceway, accented by the deep green of the fernery just outside.

As much as Susanna loves the house, its beachy feel promoted by tongue and groove throughout with not a sheet of plasterboard in sight, and a sunroom that looks straight out to sea, it’s the garden where she is most content. 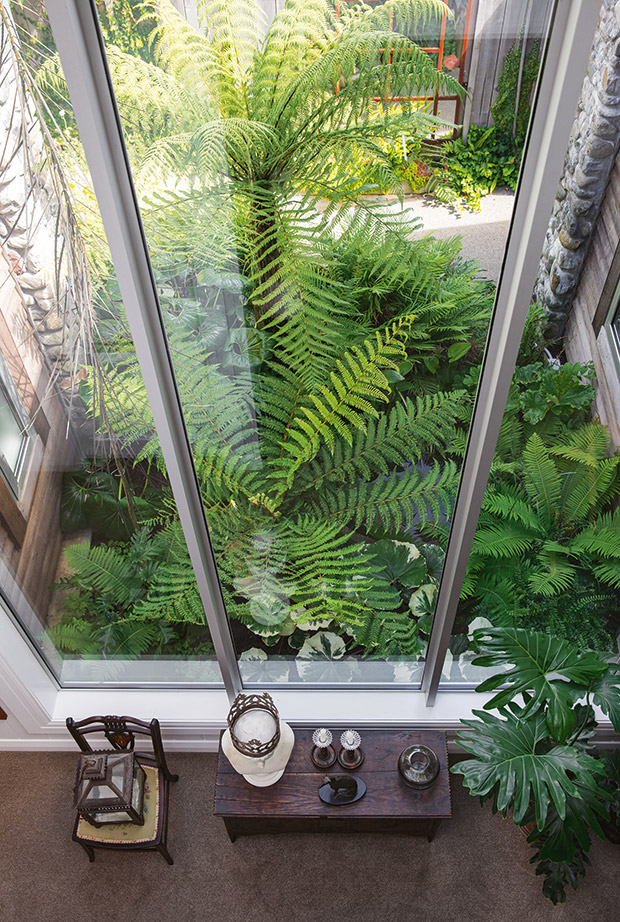 “It’s my happy place. But I don’t take it too seriously because a plant might thrive one minute and die the next. You’re here for such a short time so you must have fun. I live out there in the garden when Christopher is away if I haven’t gone with him.” (See page 85 for Susanna’s beach-garden tips.)

The pair also often head up State Highway One, not as far as Hunterville, but stopping at Bulls to go to Surrey Farm, where they have built up a small thoroughbred farm over three decades. They’ve bred more horses than they care to count, many of which have enjoyed much success at the races. “You have to have a hobby, and horses are ours,” says Christopher.

“Horses are our passion. Even though racing has lost a lot of its glamour, we stay for the love of the horses,” says Susanna. 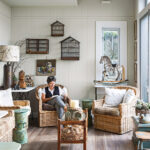 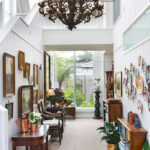 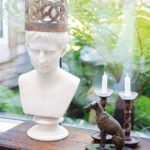 The bust of Julius Caesar is one of only two items to have survived the fire that razed the original Rathmoy homestead in 1947. 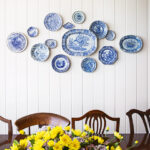 Their horsey interests started at an early age. Susanna loved her hunting, and Christopher’s great grandfather, GG Stead, was a founder of horseracing in Canterbury, owning many highly successful horses. His grandfather from his maternal side, Sir Thomas Duncan, was also a renowned thoroughbred owner and breeder in the early part of the 20th century.

Christopher and Susanna married 56 years ago, not long after Christopher had bought his first racehorse. He was 21, and the filly, which he named Hakawai (Dancing Water) after his grandfather’s farm, cost 2300 guineas (a guinea was one pound and one shilling) in the days when he earned three pounds, six shillings, eight pence working six days a week. A pair of work boots cost five pounds. “Buying Hakawai took all the pennies I had, and it took a lot of moonlighting to earn that.” That’s “moonlighting” in the literal sense, as Christopher would often find himself toiling on a tractor in the dark, working all the hours available to scrape together the money for the yearling. 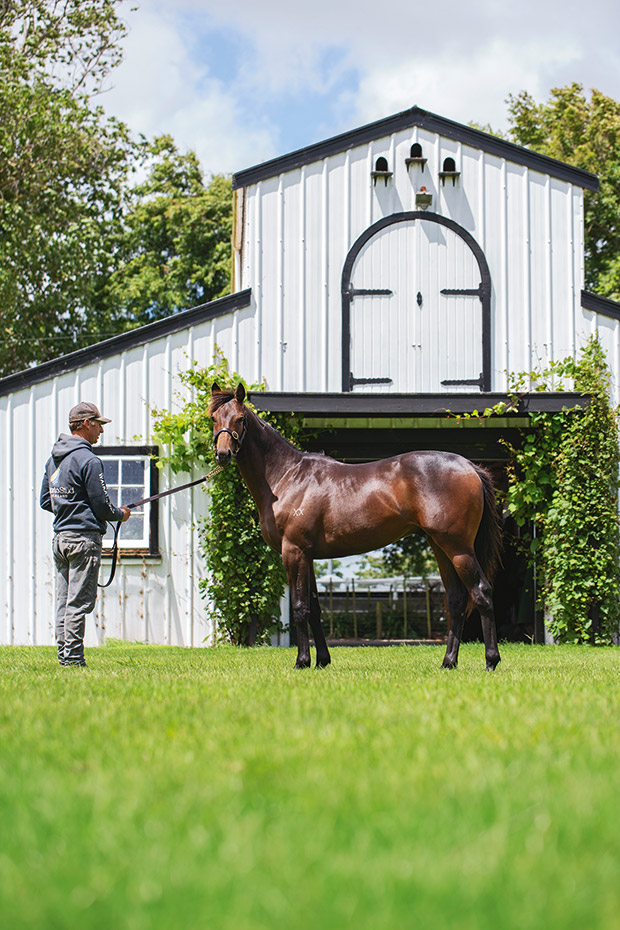 David McKinnon, in charge of the horses on Surrey Farm, stands with a yearling ready for the Karaka sales. When Christopher and Susanna were newly married, they owner-trained their horses together. “He was the ‘boss’, and I was the ‘boy’. We won 15 races,” says Susanna. It’s still her job to name the foals. “Whenever I see an interesting word, I write it down. I like real names for our horses, and preferably just one word. It’s an incredibly difficult job to find a name New Zealand Thoroughbred Racing will accept because each has to be unique and can’t be reused for a long time.”

Hakawai was very successful and much loved and still has an enormous place in the Graces’ hearts nearly 60 years later. She continues to occupy a significant part in their bloodlines, too, even though she died before Christopher could breed her. “After she died, I saved again, getting enough ammunition to buy the daughter of a three-quarter sister to Hakawai. Six generations later, that same family is still producing stake-winners,” he says.

The mare remains with them, too, in the name they’ve given their Raumati house. “Hakawai” is indeed the perfect name for a home within a few steps of the dancing waters of the Tasman.

GARDENING AT THE COAST

Susanna’s garden at Rathmoy was an extensive country garden with lakes, lawns, shrubs and established trees, which thrived in the rich soil and inland climate 450 metres above sea level. She has had to re-think her approach on the much smaller coastal plot.

“My garden here is very different in size and plant selection. When I came to Raumati Beach, I thought I’d have to garden for the wind, but actually, it’s about the salt.” 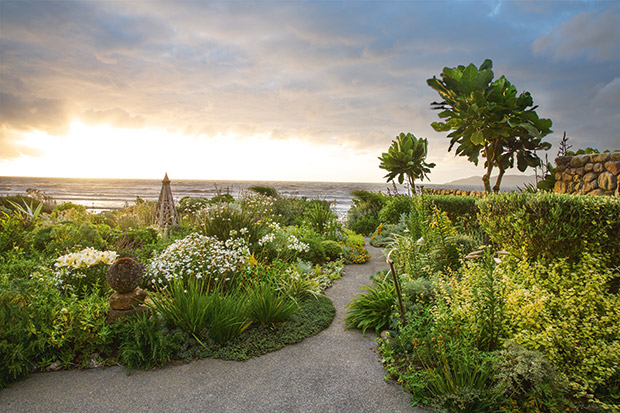 She started by asking her “very kind husband” to supply her with few tonnes of topsoil, which she used to cover the sandy base soil on four areas facing the beach. “That’s made a world of difference. My garden would look nothing like this without that topsoil. People said the sand would come up in a few years and take over again. But so far, it’s okay.”

“I’ve put the irrigation up high because it’s more about washing the salt off the plants than watering them. I’ve planted things that don’t mind the salt too much. I’ve had the best success from ‘Grey Box’ westringias, which are stunning Australian plants. I love coprosmas or anything I can clip. Corokias are good, and hydrangeas, renga renga lilies, daisies, astelias, euonymus and rosemary. But as with almost everything, gardening should be fun, and you can’t take it too seriously.” 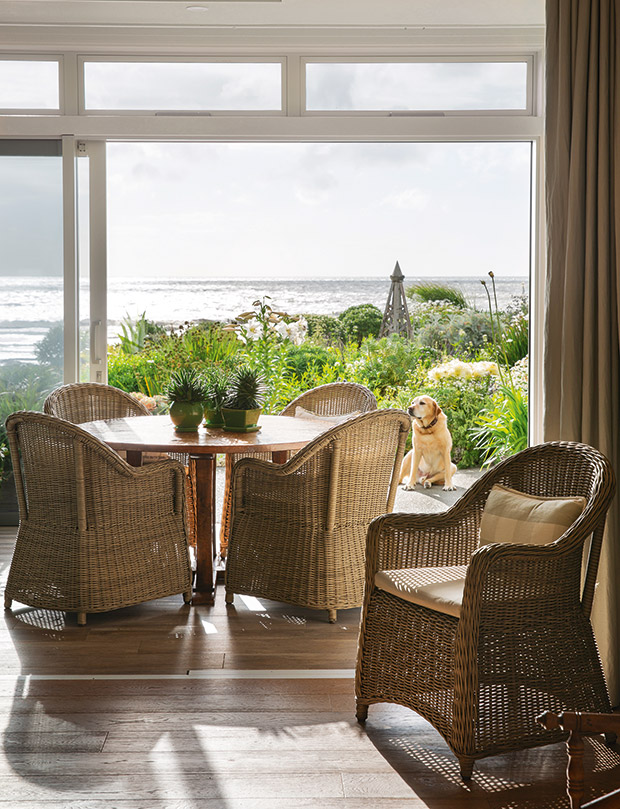 The couple spend much time at the circular table, enjoying the ever-changing view; the Graces’ entranceway is lined with paintings and items handed down by their forebears.

The plants Susanna enjoys now, which she would never have grown in Hunterville, are succulents.

“They grow so well in the heat of the courtyard. I love living at the beach, but I miss trees and their autumn colours. We had amazing trees at Rathmoy and around Hunterville, but they won’t grow here with the wind from the sea. Giant grasses are my trees now.”