Family and friendships formed on the Tora Coastal Walk 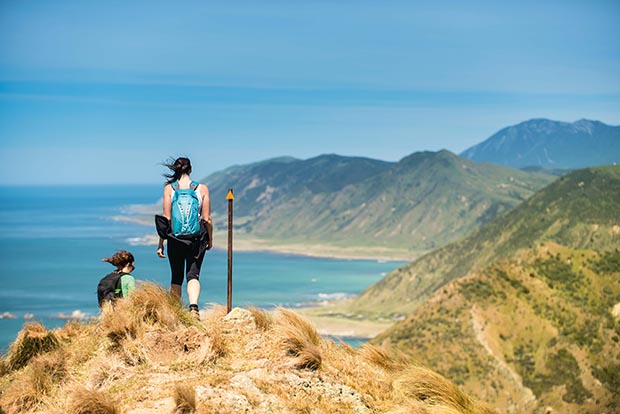 Kiri and Jenny say their guests are different people at the end of the three-day walk, thanks to a combination of fresh air, exercise and being away from the stresses of everyday life.

The journey has been every bit as important as the destination for two farming families behind New Zealand’s longest-running private walk.

When it comes to running a business, Kiri Elworthy and Jenny Bargh have broken every rule in the book. Their business sprang into life on the back of a university assignment, and ran for years without any formal agreement, business plan or even a company bank account. But operating in an organic, intuitive way hasn’t stopped the Tora Coastal Walk from being a runaway success. In fact, it’s probably been partly responsible.

“People say it’s really bad to go into business with your friends or neighbours, especially in a small rural community, and we’ve committed all the cardinal sins on that front,” Kiri says. “But we’ve always been honest with each other, and we share the same high standards. You can’t put on a face with this business; you have to be yourself. If you were putting it on, the cracks would soon show.” 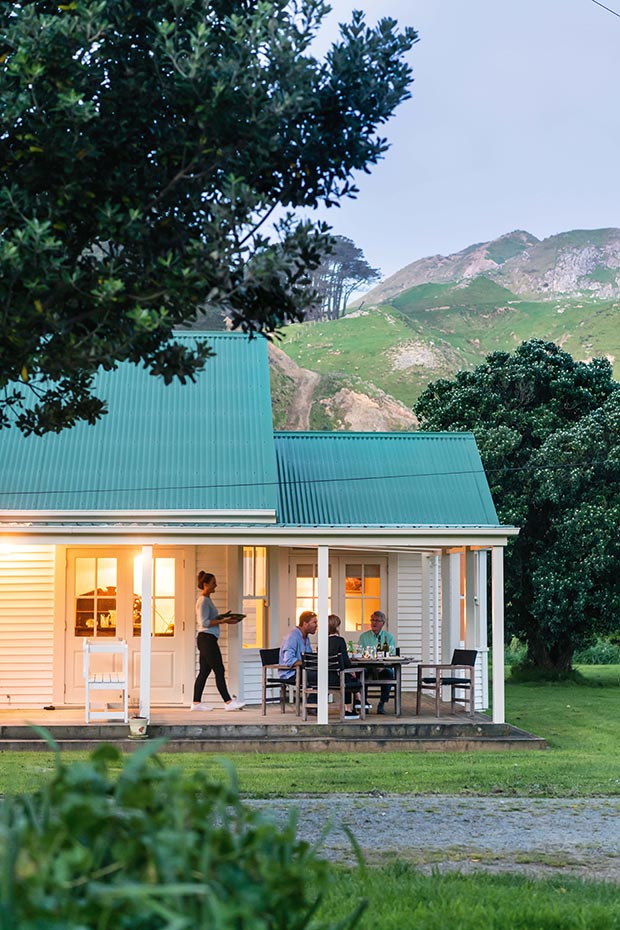 Like many rural families, the Elworthys and Barghs have looked beyond traditional farm management to bolster their living.

Private walks were just starting to catch on in New Zealand when Jenny and Jane Elworthy, Kiri’s mother-in-law, started thinking about setting one up in their isolated Wairarapa community. They were inspired by a walk in Kaikoura and prompted into action after Jane’s daughter had to create a mock tourism business for a university assignment.

“Jane rang me and asked if I’d be interested,” Jenny says. “We just thought, ‘yes, we’ll have a go at that’. It wasn’t a big capital outlay at the start because we all had buildings we could use for accommodation, and we had the tracks. We had no idea what we were getting into though.” 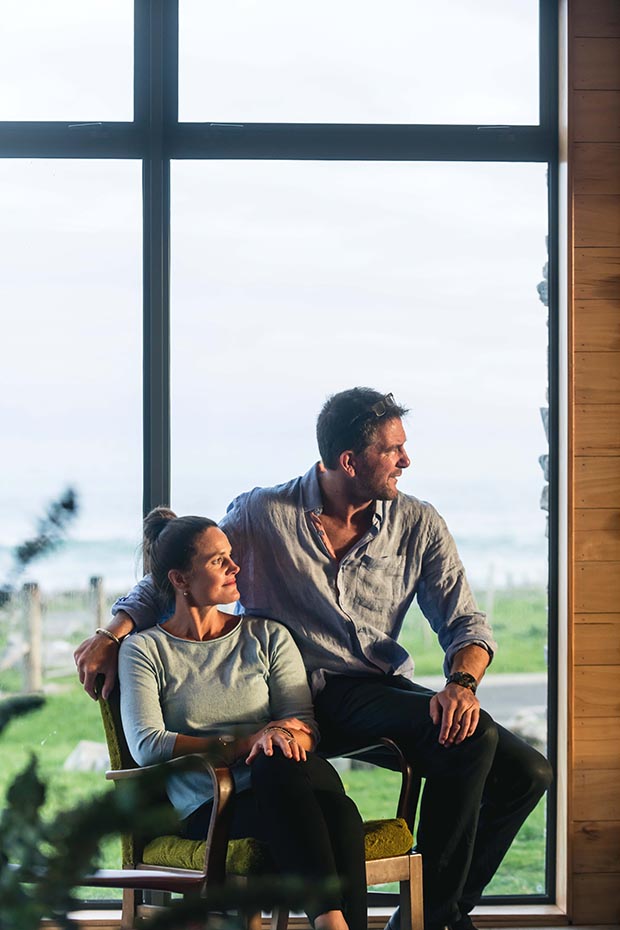 Kiri and James met after he gatecrashed a 21st birthday in nearby Gladstone. “It sounds corny but our eyes met across the room and that was it,” Kiri says. “We couldn’t wait to get married and get on with our lives together.”

The Tora Coastal Walk is a one-way 33-kilometre loop across five hill-country farms, taking in river valleys, ridgetops, creek beds and native bush. It’s adventurous, but very civilized, with proper beds and home-cooked meals rather than bivouacs and beef jerky.

Walkers spend one night at a cottage on the Elworthys’ 650-hectare sheep and beef farm, one night at the purpose-built Stony Bay Lodge near the mouth of Awhea River on the Tora coastline, and the last night at the Barghs’ 650-hectare sheep and beef farm at Te Awaiti before walking back to the starting point. Walkers need only carry daypacks (all luggage is transported for them), and the hosts do all the cooking. “We didn’t think about the variety it offered when we started in 1995,” Jenny says. “We didn’t have the smarts for that,” her husband Chris laughs. “We just thought, ‘What’s the shortest way to get to the Elworthys?’”

More stories you might like:
A Miranda couple turned an old citrus orchard into a productive garden, café and gallery

Chris, who has long benefited from his wife’s culinary skills, says the food soon became one of the walk’s main drawcards. “It’s the food and the hospitality,” he says. “Having the freedom to walk over the hills is a big thing for people, too. It’s got the coast, the high points, the river walk, the bush walk – all sorts of facets of nature. 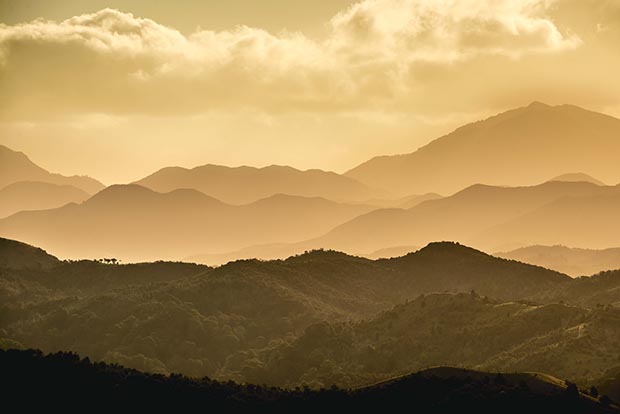 The rugged Tora coast, often buffeted by brisk nor’-east winds, is just under an hour from the wine village of Martinborough.

“Many of our walkers have never been on a farm. In my generation, everyone had an aunt or an uncle who lived on a farm who they went to visit, but lots of people don’t have that these days. They do things like ask if it’s okay to take photos of our sheep.” “[Walkers] arrive all wound up and worried about everything, but by the end of it they’re so relaxed it’s hard to recognize them,” Kiri says.

When Jane Elworthy and her husband Ed decided to move away from the area in the late 1990s, Kiri stepped up. She says her mother-in-law’s concept was ahead of its time. “It’s funny, because lots of the things we do, like home cooking, growing our vegetables, collecting rainwater and shooting meat are fashionable now.”

She’s grateful that her relationship with Jenny has grown and strengthened over the years, despite personal and professional challenges along the way. “Jenny and I inherited each other,” she says. “Jenny was a really good friend of my mother-in-law, but that was no guarantee we were going to get on with each other. We laugh about it a lot actually. Jenny said to me once, ‘I don’t know what category you fall into really. You’re not like a daughter, but you’re not like a friend either.’

“I think of Jenny and Chris as family in a lot of ways; Jenny is probably one of the people I’m closest to. We just know what each other thinks.” Jenny adds: “There’s 20 years’ age difference, but we’ve always got on well and I’ve always admired Kiri. Not everyone can be thrown into business together, especially a business that’s all about people. It’s a funny old relationship, but it works.” 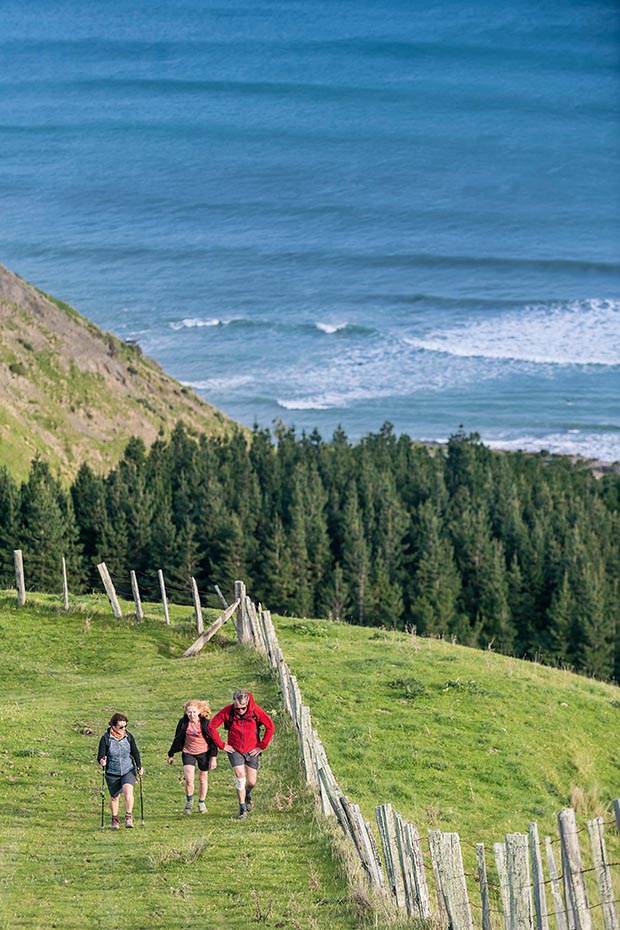 It’s also a working partnership that includes their husbands, children and grandchildren. James and Chris do their fair share of talking to guests, maintaining the tracks, rescuing the odd lost or injured walker and transporting bags (mostly without incident, except for one memorable time when they got talking about a farming issue and created the mother-of-all bag mix-ups).

All Jenny and Chris’ five children and nine grandchildren have been involved in some way – one son and daughter-in-law used to be the hosts for night two. The Elworthys’ four children, aged 16 to 26, have also grown up doing their bit. 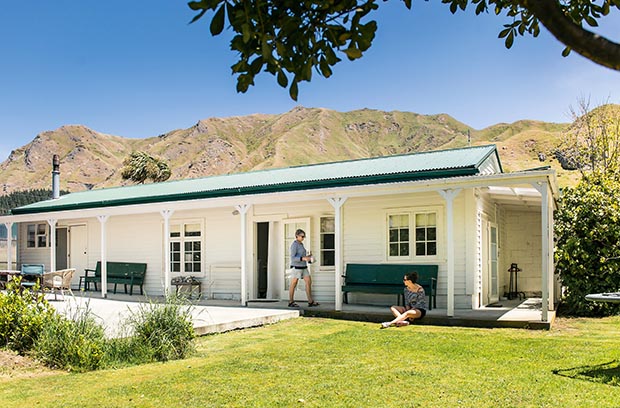 “We all know exactly what the system is – you have to operate like that when you have a different group of people coming up the driveway every day,” Kiri says. “My lemon tart is my signature dish, and I’ve taught all the kids how to make it. If I’m in town, running late, I will ring up and one of them will make it. Sometimes I think I’m redundant, particularly if the boys go down carrying the lemon tart. The walkers love it.”

“We share our lives with people, and they want us to be ourselves,” Jenny adds. “People see you as you are because we couldn’t do it any other way.” 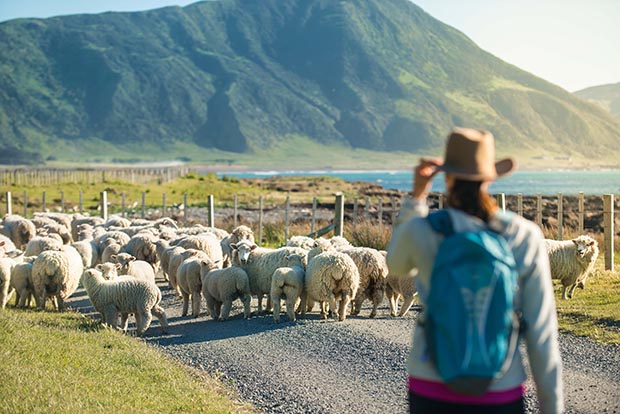 Developing the business has helped family harmony in other ways, including providing an important second income stream. “It’s helped pay for boarding school fees for a start,” Kiri says. “Life would have been very different without it. I’ve watched lots of girls come into this area with great jobs in the city, but the commuting is tough and a lot of them find that it’s just not feasible once you have small children. I’ve never lost sight of how lucky I am that we have this.

“We were all so green at the beginning. Jenny and I have had a lot of personal growth. We started out doing everything ourselves but we’ve attracted a lot of people who have wanted to help us and advise us along the way.”

Jenny says they continue to draw inspiration and strength from the walkers themselves. “We’re incredibly lucky with the kinds of people who come. That’s a real bonus. I think the whingers stay home because the people we get are really inspirational. We’ve had lots of walkers in their 80s who have done the whole three days. “It always surprises me when people say they’ve loved it, even now. We never take it for granted that they will enjoy it. I think if we ever feel like we’ve got it all sorted then we’ll go wrong.” One of Kiri and Jenny’s most ambitious projects to date has been the construction of the purpose-built Stony Bay Lodge, designed by Martinborough architect Victoria Read.

Kiri says she feels incredibly lucky at how things have worked out. “I think it helps that I think Jenny is amazing. We love what we do and we love doing it together.”

WHAT WE’LL BE DRINKING
Jenny: “A mocktail in a beautiful glass.”
Kiri: “Poppies’ Rosé is always at the top of my summer drinks list.”

THE GAMES WE’LL BE PLAYING
Jenny: “Pétanque. We have a court and even play in teams for a Boxing Day cup.”
Kiri: “Cards Against Humanity – slightly inappropriate at times, but always good for a laugh.” 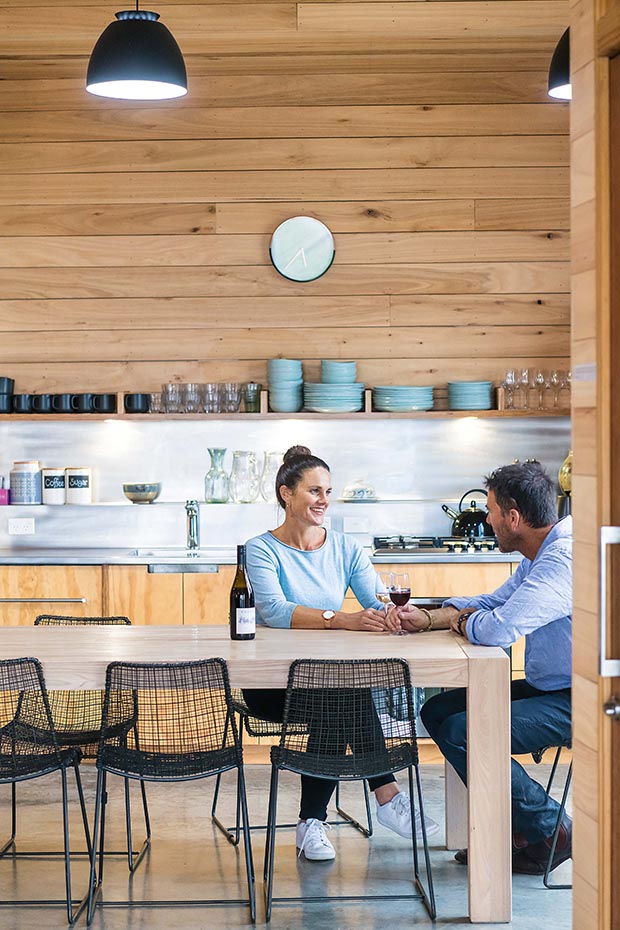 WHAT WE’LL BE LISTENING TO
Jenny: “Joan Baez and Carole King.”
Kiri: “Whatever my husband has on his Spotify playlist. His taste in music is eclectic and you never know what you’ll get.”

WHAT WE’LL BE READING
Jenny: “For a good laugh, anything that Dawn French has written. Nothing too heavy.”
Kiri: “Something character-driven and thought-provoking.”

WE’RE LOOKING FORWARD TO
Kiri: “Our oldest daughter Margot recently got engaged and the wedding will take place in a marquee on our lawn in late December 2018, so I’ll be spending 2018 getting the garden ship-shape. I can’t wait.”

LABOUR OF LOVE
Stony Bay Lodge, which sleeps 14, was completed in 2014 and is available for holiday lets in the winter season when the walk is closed. The open-plan living area, with expansive views of the rugged Tora coastline, is match-lined with eucalyptus milled from the Elworthys’ farm, and a huge Axminster-style rug that Kiri rescued from a friend’s house in Hawke’s Bay largely inspired the décor. 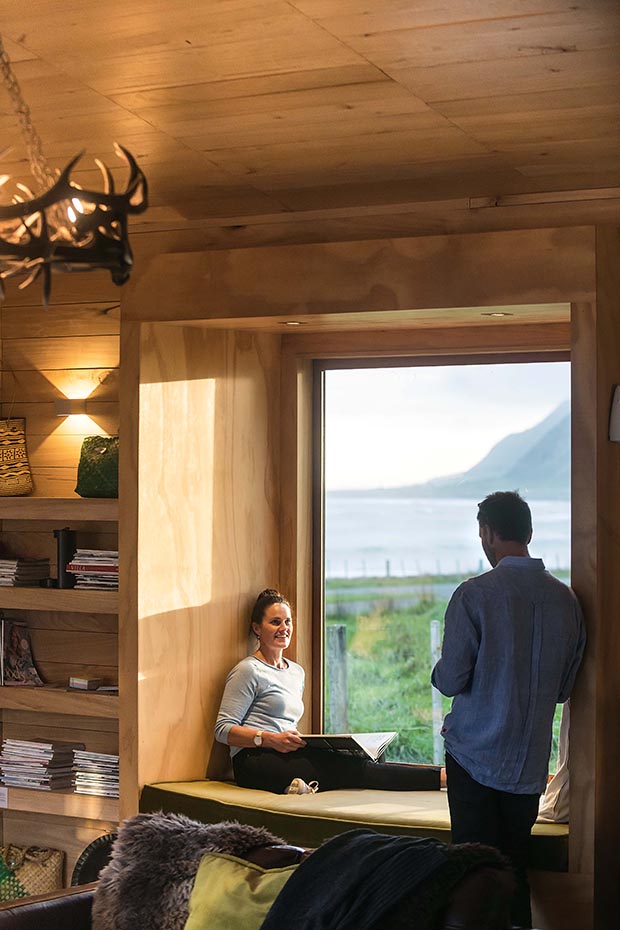 “Jenny and I have had a lot of fun furnishing this place,” Kiri says. “We’ve tried to keep it lodge-y.” Kiri’s husband James made the striking chandelier from cast antlers found on the farms, while Jenny has sourced all the hand-thrown pottery platters and jugs.
“Occasionally I’ve got something for the lodge, and Kiri has said, ‘ummm…’ so I know it doesn’t work,” Jenny laughs. “I don’t mind at all.” FOOD, FOOD AND MORE FOOD
The Tora Coastal Walk is known as much for its fine catering as for its dramatic scenery. Jenny says people often mock-complain about putting on weight during the three-day tramp. “Sometimes people arrive saying, ‘Do we have to walk? We’ve just come for the food.’”

Both families have extensive vegetable gardens, while the sea and farms provide much of the protein. “Our boys are mad-keen hunters, so they come home and fill the freezer with the most beautiful venison,” Kiri says. “People’s eyes nearly pop out of their heads when I say, ‘this was shot on that hill over there’. People just don’t cook anymore.” 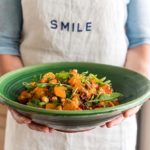 Old-fashioned rural hospitality – and plenty of home baking which gives walkers the boost they need to climb another peak. 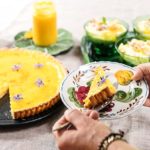 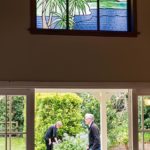 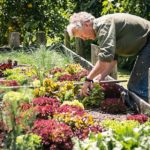 The families’ combined veggie patches produce enough each season to feed nearly all the Tora walkers. 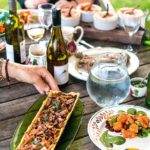 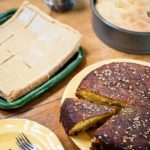 Jenny and Kiri are currently working on a second cookbook of their most popular recipes, due to be published in 2018. Their first, Tora Coastal Walk Recipes is available from toracoastalwalk.nz. MAKE IT: An easy lemon tart from the ladies behind the Tora Coastal Walk in the Wairarapa.