Far North Queensland: A roadtrip from Cairns to the tropical marvels of Daintree Rainforest 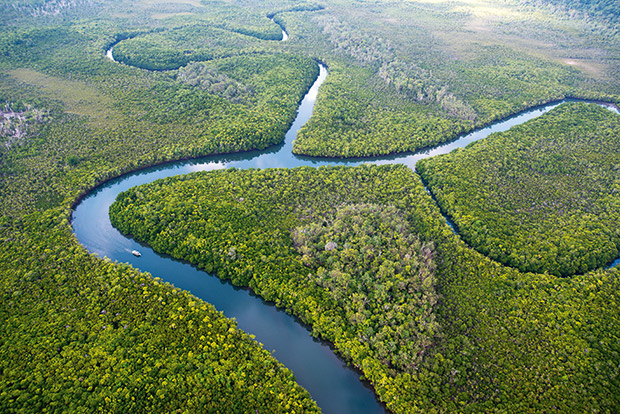 The expanse of the mangrove forest along Cooper Creek dwarfs a tour boat.

Northern Queensland is the stage for an adventurous road trip between coastal treasures, a World Heritage rainforest and the cultural and geological wonders of the dry interior.

Our voices drop to a hush as though stepping into a cathedral. Yet this masterpiece — inspiring a feeling some might call spiritual — is made by nature, not man. Slender grey trunks of fan palms rise to a thick canopy, filtering light in an eerie glow.

This large stand of palms is one of many highlights on a road trip through Far North Queensland, starting in Cairns, the region’s main city. This is the gateway to the Great Barrier Reef and its terrestrial wonders, including 1200 square kilometres of Daintree Rainforest, the largest block of tropical rainforest in Australia.

This ancient forest (180 million years old) is rich in wildlife, with 30 per cent of all the frog, reptile and marsupial species in Australia, 65 per cent of the country’s bat and butterfly species, 18 per cent of all bird species, and 12,000 insect species. Dense vegetation presses in on the narrow winding road, shaded by tree tunnels. It is eternal twilight in this primaeval forest. Roadside signs warn that cassowaries, large flightless birds living in the rainforest, may step onto the road. 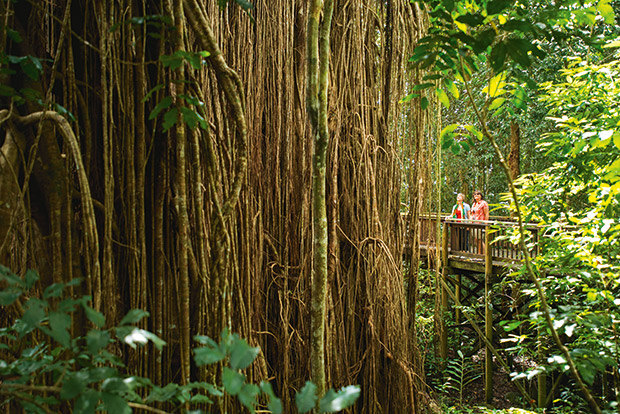 Another great ecosystem of the Daintree is mangrove forest, the tidal transition zone between land and ocean. A particularly rich mangrove forest, along the meandering Cooper Creek, is accessible only by boat. Skipper Ernie, a laconic local, hopes large crocodiles inhabiting the waterway might make themselves known to his customers. No guarantee.

What is a given, however, is the raw beauty of the scenery. Around the first bend, Thornton Peak, at 1374 metres, the third-highest mountain in the area, rises over the mangroves and forms a supreme wilderness that dwarfs us.

The Daintree’s tourism centre is Cape Tribulation. With accommodation options from camping to resorts, this small community is the base for exploring the surrounding rainforest.

We check into the Ferntree Rainforest Lodge, hidden in dense jungle, then explore the nearby Dubuji Boardwalk. In the evening, we stroll along the deserted Myall Beach, a long sandy stretch fringed by coconut palms. In the background, the dark rainforest-clad mountains soar into rain-heavy clouds. Twilight bathes the land in an orange glow. 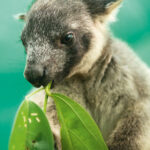 The region boasts a variety of tropical wildlife, such as this young tree kangaroo. 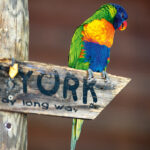 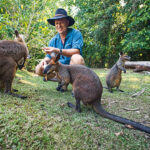 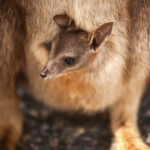 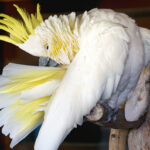 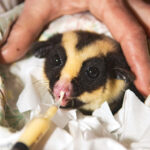 In such tropical splendour, it is easy to forget that this is a wild place. Not far from here, at Thornton Beach, Hamilton woman Cindy Waldron was killed by a crocodile while on an evening beach walk in 2016.

At Cape Tribulation, the famous Bloomfield Track starts. Dirt replaces bitumen. Creek crossings add spice and a touch of adventure. A 4WD is required, and in wet conditions, this section of the road trip can be tricky. In the early 1980s, protesters blockaded the road’s construction, fearing the unique rainforest would be logged. Ultimately, these protests led to the protection of large tracts of the Daintree Rainforest, now recognized as one of the most diverse and oldest on Earth.

We stop at Stingray Bay along the Bloomfield Track, where solitary trees sit in the glittering shallow water, creating a surreal landscape. The Ferntree Rainforest Lodge at Cape Tribulation is surrounded by tropical jungle.

Not far from here, the vegetation begins to change. The almost frivolous lushness of the rainforest gradually morphs into the dry, dusty outback. The Bloomfield Track eventually leads to the small Aboriginal community of Bloomfield and the thundering Bloomfield Falls, accessible by a short track.

By the end of the wet season, the 40-metre-high falls are at their most spectacular. Even during the dry, they are impressive. The wind generated by the falling waters pushes fine spray into our faces and buffers the vegetation.

Just an hour’s drive from Bloomfield is Cooktown, the only significant settlement past Cape Tribulation on the east side of the Cape York Peninsula. On the way there, we stop at an intriguing geomorphic oddity protected in Black Mountain (Kalkajaka) National Park. Huge black boulders, some the size of houses, pile up to form a mountain that features in many indigenous Dreaming Stories. A refreshing swim in the upper Cooper Creek.

Other stories, dating back to the late 1800s, tell of people disappearing without a trace — horses and even whole herds of cattle vanishing. For the local people, these stories serve as a warning that Black Mountain is a dangerous place. Climbing the mountain is strictly off-limits.

Cooktown, a pleasant outpost at the edge of the vast wilderness of the Cape York Peninsula on the mangrove-fringed mouth of the Endeavour River, is where Captain Cook spent seven weeks in 1770 repairing HMS Endeavour after hitting a coral reef. During Cook’s stay, the first-ever contact between indigenous Australians and Europeans took place. When the budding relation soured, both sides managed to quell the animosities and reconcile. Until today, this is the only case of reconciliation between Aboriginal people and early colonizers. 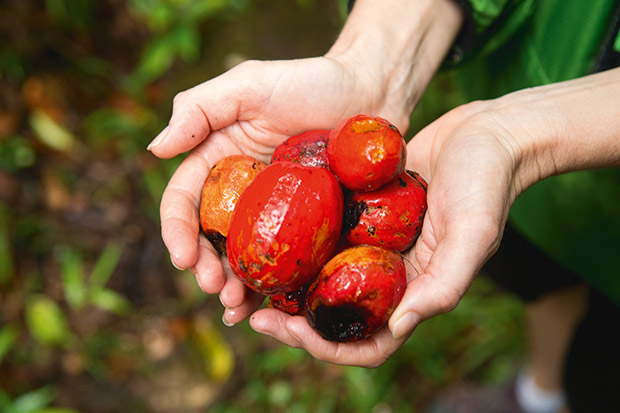 The fruit of the rainforest.

North of the historic town, the road becomes dusty, with dry savannah woodland dominating the vegetation. A great sense of remoteness envelops us. Following the unsealed Battlefield Track, we turn inland towards Laura. The small village sits on the Peninsula Developmental Road, the main road on the Cape York Peninsula.

More stories you might like:
Exploring Oita Prefecture on Japan's Kyushu Island: Where to eat, where to stay and the best onsens to visit

Covering 4.8 million square kilometres, this wild and remote part of Queensland has a strong and diverse indigenous culture. This is what makes Laura a destination. In the surrounding rugged sandstone country are numerous rock art galleries. UNESCO considers the sandstone belt around Laura among the world’s top 10 rock art sites. The ancient paintings, hidden in a confusing world of narrow canyons, large overhangs and vertical cliffs.

At one rock art gallery, a representation of a crocodile, a row of fruit bats, other local wildlife and spiritual figures adorn the walls. But our guide keeps the best for last, leading us under a sprawling overhang, the back wall of which is decorated with large, gangly figures, hands outstretched and sporting strange hairdos. These are the Quinkan, spirit figures unique to the area. The age of these paintings is not yet determined. Estimates range from between 15,000 and 40,000 years. 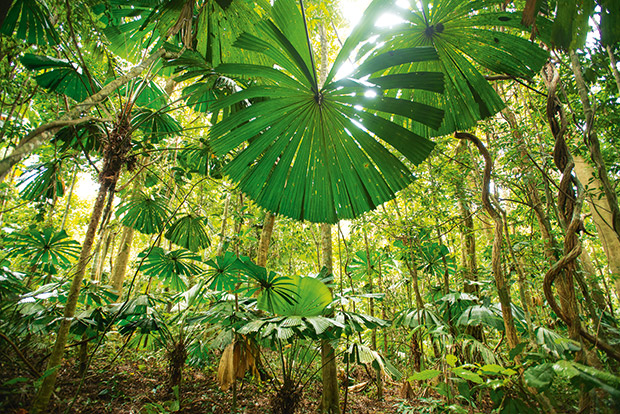 A pure stand of fan palms in the Daintree Rainforest.

Far North Queensland has three distinct environments: the wet rainforest-clad coast, the dry outback of the Cape York Peninsula and the volcanic plateau, over 700-metre-high Atherton Tablelands roughly 300 kilometres south of Laura. To get there, we head to Lakeland, a tiny settlement only worth mentioning because that night, we end up sitting with about 30 other spectators in camping chairs to watch something we didn’t know still exists. The circus is in town. No large tent, just a bright red trailer, some floodlights powered by a generator, a llama and a goat, a juggler, a clown and an older gentleman in a circus director’s outfit.

Under the sparkling night sky, rugged up to keep warm, we are transported back to a time where life was simple and bigger didn’t mean better.

The Atherton Tablelands cover almost 65,000 square kilometres and are a hotchpotch of intense agriculture (sugar and coffee plantations dominate), volcanic crater lakes, pockets of rainforests, picturesque villages, and thundering waterfalls. It is also a great place to see rare animals. One of the giant trees in the Mossman Gorge.

We stay at Lumholtz Lodge, a B&B where the owner, Margit Cianelli, cares for orphaned tree kangaroos; at Granite Gorge, endangered rock wallabies can be observed; a bat hospital makes close encounters with these creatures of the night possible.

Near the quaint village of Yungaburra is Crater Lakes National Park. This reserve protects Lake Barrine and Lake Eacham, two water-filled maar volcanoes surrounded by rainforest. These lakes were created by powerful explosions when rising magma came in contact with groundwater.

Volcanism is also the topic of an excursion from the tablelands worth considering: Undara Volcanic National Park. The reserve with its famed lava tubes is about 130 kilometres south-west of the town of Atherton. These caves were formed about 190,000 years ago when the Undara volcano erupted. The lava tubes in the Undara Volcanic National Park and the rock art galleries with their famous Quinkan figures near Laura are only accessible with a guide.

The fire mountain expelled a large amount of fast-flowing lava that followed riverbeds for 160 kilometres. The surface of the flow cooled and hardened quickly, forming essentially a pipe through which the hot lava kept flowing. Once the eruption ceased, the lava drained out, leaving behind caves. These lava tubes are as big as railway tunnels.

The route from Undara to the coast is a cross-section of all that makes Far North Queensland a perfect playground for a road trip: the wonders of an extraordinary geology; the vastness of the dry savannah; the beauty of the many waterfalls; the tropical rainforest at the eastern edge of the tablelands, accessible via the Mamu Tropical Skywalk.

From there, the dramatic Palmerston Highway plunges to the fertile coastal plains around Innisfail, rich in sugar cane and bananas and backed by the rainforest-clad mountains of the wild Wooroonooran National Park. We are back in the wet tropics of the coast, a fact underscored by showers drifting in from the sea. The picturesque cascades of the Josephine Falls give us a last fix of the rainforest. After traveling almost 1300 kilometres in 10 days, the road trip ends where it began, in Cairns. Along the way, we only touched the surface of this diverse tropical region. With more time on our hands, we would have loved to spend an extra day or two at Cape

Tribulation to explore more of the extraordinary Daintree Rainforest. And to have gained a better cultural insight by exploring Bloomfield and its surroundings on a tour led by local Aboriginals instead of just breezing in to have a quick look. For now, though, the wonders of the Great Barrier Reef await.

How to get there: Air New Zealand flies non-stop from Auckland to Cairns from March to October. At other times, it’s possible to fly to Cairns via Brisbane or Sydney.

Where to stay: Cairns, Cape Tribulation and Cooktown offer a range of accommodation options. Accommodation in Laura and Lakefield, however, is quite restricted and basic. The Atherton Tablelands and the coastal region offer a multitude of stay options.

How to get around: A 4WD vehicle is essential for this road trip, especially since the unsealed Bloomfield and Battlefield Tracks require high clearance. Some of the creek crossings can be challenging after rain. 1300truckhire.com.au

Best time to go: The dry season between June and October offers pleasant temperatures, blue skies and very little rain. Dry conditions are essential for the Bloomfield and the Battlefield Tracks.

What to do: Jarramali Rock Art Tours and Ang-Gnarra Aboriginal Corporation: guided rock art tours with traditional owners from Laura, jarramalirockarttours.com.au and anggnarra.org.au