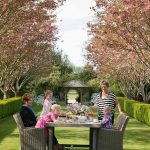 Hideaway owner Joanne McCallum (right) and her friend Karen McEwan set the table for afternoon tea overseen by Karen’s granddaughters, Leah and Kacee. Meanwhile, Joanne’s grandson, Jonty, seems more interested in what might be on offer in the snack department. 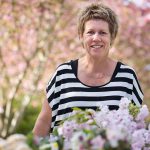 Joanne never has a problem coming up with new ideas for her 4.5ha of garden. 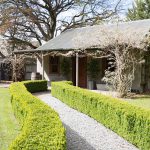 Where it all began nearly 20 years ago… buxus hedging lines the path to the homewares store, Joanne’s first enterprise. 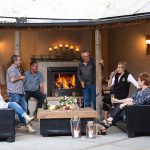 The restaurant courtyard is a great spot for a neighbours and helpers – (from left) Joanne and Wayne, Wayne’s brother, Kevin McCallum, Keith and Mary Cooper and Karen McEwan. 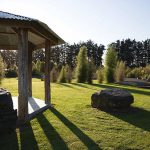 The ghostly shapes of young ribbonwoods in the native garden. 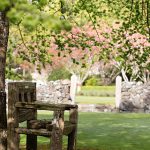 A totara-post chair made by Wayne’s late father, Mick McCallum. 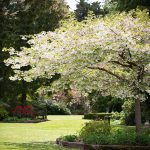 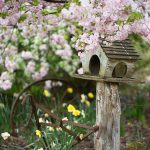 One of Wayne’s hand-crafted birdfeeders. 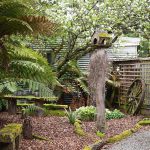 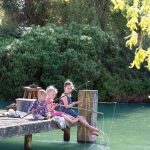 Watch out goldfish… Jonty, Leah and Kacee try their luck off the jetty. Wayne says the hardwood timbers were bought for next to nothing when an old wharf was dismantled in Owaka many years ago. 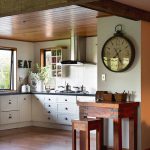 A large and welcoming kitchen is essential to the McCallums, especially when catering to the constant flow of family, friends and clients… coming, going, chatting, planning and partaking in multiple cups of tea. 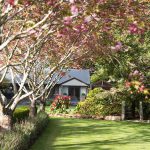 The McCallums sometimes travel overseas during the winter months , returning to the sight of masses of cherry blossoms in front of the family home.

A love of beautiful things- particularly weddings- has transformed the lives of a Southland family from the ground up. 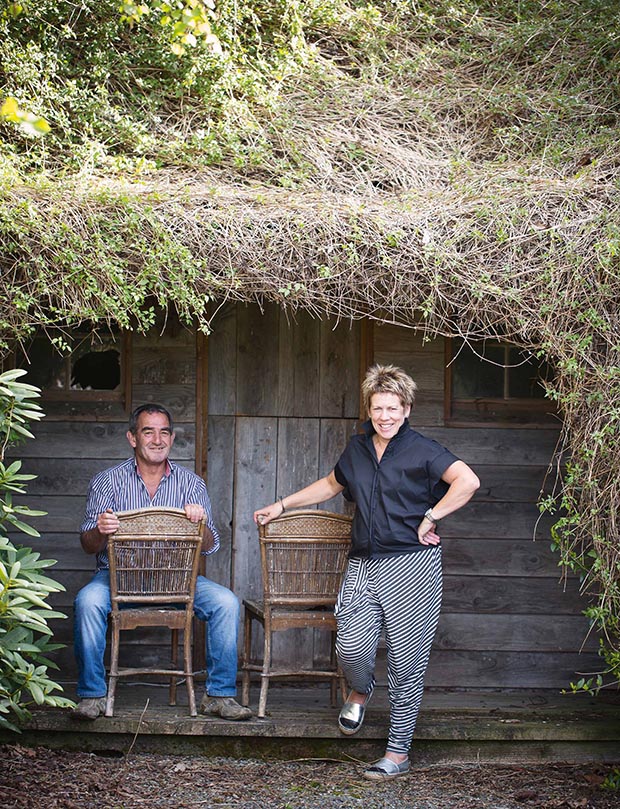 Everyone seems to know everyone within the rolling hills of rural Southland. The social fabric may have changed as farming practices alter, but these remain friendly pastures where family and tradition have the status and significance they deserve.

Southern weddings, as Joanne and Wayne McCallum know well, are a big deal. The McCallum’s elegant 4.5-hectare garden has provided a backdrop for hundreds of occasions over the past 13 years. Both born and bred Southlanders, the couple met through local rugby and married young – Joanne was 20, Wayne 21. Settling on Wayne’s 18-hectare sheep farm at Lochiel, they built themselves a simple farmhouse. Wayne worked then, as he does now, as a stock agent and livestock trader and a few short years later the first of their three sons arrived. When the McCallum boys were approaching school age, Joanne – a lover of beautiful things – began toying with the idea of opening a homewares shop in nearby Winton.

Sheep dominated the farming landscape back then – Joanne’s own family’s farm had been at nearby Hedgehope. She worked for an agricultural company post-school so the sum of her knowledge of retail and interior design was nil. She did, however, possess a passion for design and a great belief in leaping in and learning along the way. “I’d never even worked in a shop so I knew absolutely nothing but sometimes you do just have to jump in the deep end.”Establishing a business at home became the best option, allowing her to be there at school-bus time when three little boys arrived home each day. So she gathered stock, set up shop and there discovered an eye for design that was to transform the couple’s home, garden and businesses. 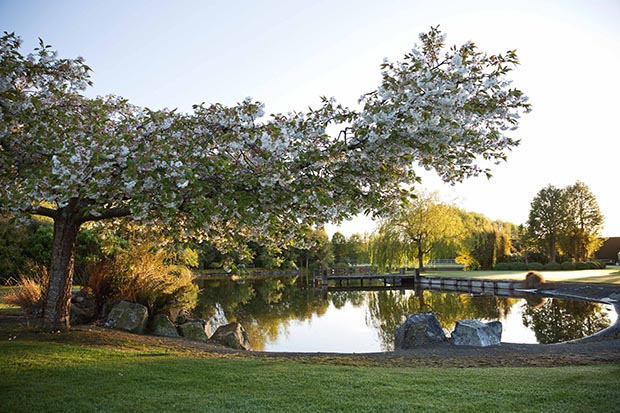 The pond – complete with its own beach, jetty and waterfall – is a treasured spot for bridal photographs and ceremonies; Wayne and Joanne McCallum outside the old rabbiters’ hut.

Creating the store in the pre-online shopping days was an advantage, Joanne says. People tended to tour about enjoying visiting gardens and shops more than they do now. On sunny afternoons customers would wander out into the small garden and not want to leave.

“People liked to go for a stroll around our garden, which led to people wanting wedding photos in the garden, which led to wedding ceremonies. They started to do canapés afterwards so we’d get the braziers going for them. It was pretty cosy out there and they just wouldn’t really want to go home.”

Joanne expanded the garden, then expanded it a bit more and added another pond, some more lawn, another walkway. Southland’s moist, temperate climate lends itself to the quick establishment of plants and trees. No irrigation needed – just a close relationship with a spray pack to keep the weeds at bay and, she says, it’s fairly easy-going. Within four or five years the long avenue with its glorious flowering cherries edged with lavender and buxus hedging had taken shape. People kept coming and Joanne began eyeing up the implement shed next to the house – a venue was now needed for the growing wedding business. “It was under a big oak tree that is 100 years old so of course we wanted to keep that but we did the shed up barn-style and that became our venue and later a restaurant. Everything just seemed to evolve as we went along. We didn’t plan it all out and we certainly didn’t have lots of money.”

More stories you might like:
This Auckland mum studied the Spanish shoe-making industry before launching children's shoe brand Pretty Brave 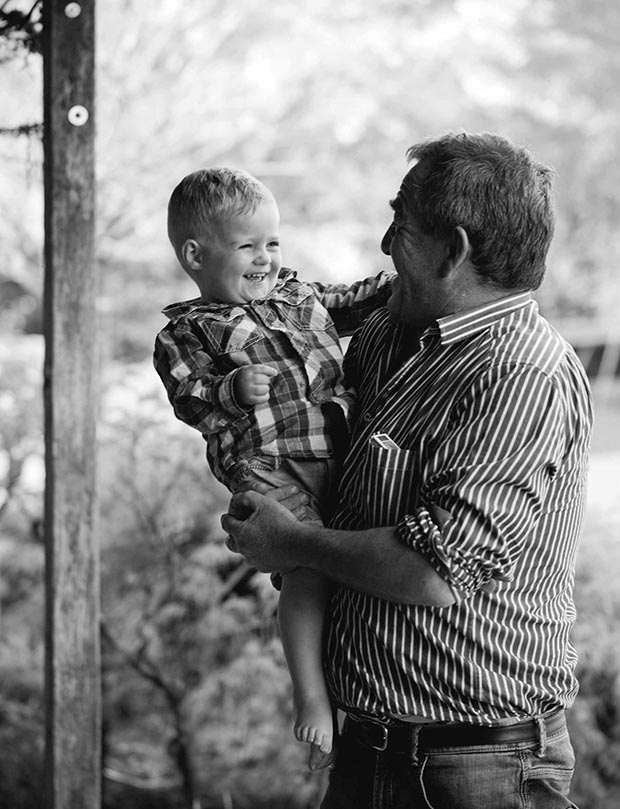 The garden continued to grow and before long the couple were hosting 30 weddings a year. “We could have three weddings in one weekend. My friend Karen helped out, but yes, it was a really busy time. I think because we are probably quite down-to-earth people we just made everyone feel welcome. There was nothing fancy about it and it had that personal touch to it… you went the extra mile.”

The tempestuous Southland weather certainly can be challenging. One bride’s veil was swept off her head in a gust and tossed into a pond where it elegantly floated until being rescued and dried just in time for the ceremony. There has been at least one bride who has walked down the Hideaway aisle twice and many local families have long associations with the place.

The friendly and relaxed atmosphere, Joanne says, relieves any nervous jitters and helps couples embrace with good humour anything unexpected on their big day. Like the time someone forgot to tie up the family’s aging black labrador when a ceremony was about to begin. A hush fell on the crowd gathered in the garden, music flowed forth and the bride set out to walk down the aisle. Out wandered the dog to lead the way, tail wagging at this unexpected opportunity for being the centre of attention.
A grand silk-lined marquee stands permanently in the garden and is the scene every two years of a charity ball that the couple, as part of a small local group, took on. 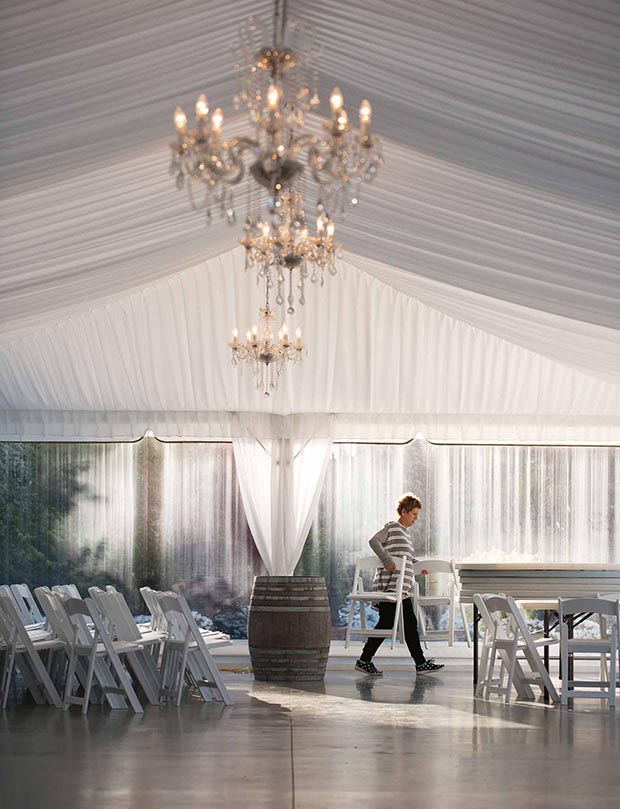 Having a reliable and talented team is essential for success in the weddings game, Joanne says, setting up the silk-lined marquee in preparation for florist Rachel Reed to arrive and add her creative magic.

About 340 people danced the night away at the last event, raising about $35,000 for child-cancer research. The Southern Artisans pre-Christmas Fete is also held each November at the Hideaway and for a day the garden bustles with music, colourful stalls, shoppers and excited children. Joanne has two gardening ladies who prune, tidy the beds and plant out new plants. The trio team up when there are new ideas afoot and Wayne gets called upon help with bigger jobs. Being her own toughest critic, Joanne tended to look at garden vistas she had created, see faults and immediately have to fix them.

“I am a shifter of trees. Some of the trees here have been shifted three times. And I’m very critical of my own stuff – it’s an attention-to-detail thing and if I can’t sleep I will start thinking about something in the garden that I want to change.” It isn’t just the garden that has been the subject of Joanne’s enthusiasm over the years. She has also transformed the basic farmhouse from top to bottom, more than doubling its size. This now comfortably accommodates friends and their ever-growing family, including grandsons Jonty and Jackson. Their own boys are now grown. Hayden, the eldest, works locally in rural real estate; Brad is farming the 325-odd hectares that the family bought in the nearby Hokonui hills. Ryan, the youngest, is completing his master’s in political science at Otago University. “Things continue to evolve,” Joanne says. “This season we have taken over the restaurant ourselves which is an exciting new challenge we are getting our teeth into.”

The couple’s retreat is an Arrowtown holiday home but Southland will always be special to them. The province’s population has grown and changed, particularly with the dairy boom, which really got going in the early 2000s, bringing waves of newcomers. As a result Fonterra flags and rapid numbers have replaced names on many mailboxes, as family-run sheep farms were converted for cows.

The deep-seated caring of its small rural communities, however, has not disappeared. “We have a close-knit community here,” Joanne says, “and we have a street party each year. Yes, it is different now and people generally have less time for each other but you still know if anything happened they’d all be there for you. Southland really does have some of the most caring and supportive people in New Zealand. You have to give the place credit for that.”