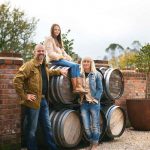 The French wine barrels (Poppy sitting on top between father Michael MacMillian and mother Jackie Crow) from nearby Neudorf Vineyards will be crafted into a range of homewares. 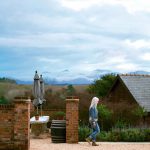 The family live an artful life against the dramatic backdrop of the Mount Arthur ranges. The Japanese Cypress table in the courtyard was made by local Mark Perry who named his business Peg Leg Woodwork following the loss of a limb in a logging accident. 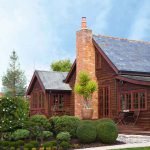 From the exterior, the house is unrecognizable as the former Neudorf school hall. Buxus and hebes planted near the front door are trimmed into shape three or four times a year. “Michael can’t help himself, he has to have form and the hedging plants lend themselves to this,” says Jackie. 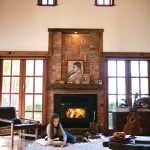 The oil painting on the mantel of the living room is a portrait of Michael’s father, Howard, completed in 1960 by Trevor Moffitt. Michael’s bronze, Bathing, is silhouetted in the light from the window while the low coffee table is an upcycled wool press lid with castors added. 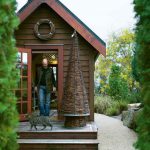 Taylor, the tabby, is nonchalant about the fellow feline on the roof of this former gallery space. The 2.5 metre vine-wrapped trees are created from cuttings woven onto a welded frame. 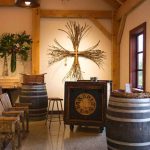 The couple serve coffee in the gallery where a wool press has been converted into a table on wheels. The large cross is made from vine prunings. 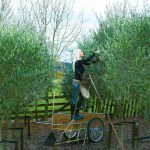 Jackie picks olives in their frantoio grove and transfers the haul for later pickling;

With art in his arteries, Michael MacMillan maintains a family tradition in a valley of hops and hopefulness, his greatest supporter by his side.

A contained thrill sparkles in the eyes of the archivist at Te Papa Tongarewa. With practised ceremony, she pulls on her white cotton gloves then, like Alice’s rabbit, disappears into the cooled gloom of the vault.

Sculptor Michael MacMillan and his partner Jackie Crow have travelled to the museum to unearth a piece of family history. Maori Patterns Painted and Carved is a respected turn-of-the-century record of rafter patterns by Michael’s great-great-grandfather, John Henry Menzies.

The couple watch in silence as the archivist returns then runs a hand over the intricate cover. Their own first-edition of this rare book is displayed on the coffee table at home. In that copy, a three-year-old Michael’s unrestrained pencil scribbles add a naive interpretation to the kowhaiwhai. “Heaven knows what Mum and Dad thought,” he laughs.

For five generations the MacMillans have been artists of one sort or another. When there’s a master carver, two or three celebrated painters and the first woman to build and fire a diesel kiln in Canterbury in the family, a creative path seems destined.

“My parents met in Christchurch at art school,” explains Michael. “They were tutored by [landscape artist] Bill Sutton.” They taught art, became potters, moved to Monaco on the outskirts of Nelson and gave their four boys lessons in resourcefulness. Just as well. Art as business is often a self-contradictory concept.
So when Michael met Jackie, a former schoolteacher, on a blind date 14 years ago, they formed an indomitable team to challenge the status quo.

“Mike is a dreamer and I’m a realist,” says Jackie. “We were born one day apart.” They sold their respective houses and took a calculated leap of faith with the ultimate goal of allowing Michael to become a full-time sculptor.
Central to this plan is their 1.5-acre property in Upper Moutere, a rural enclave where long-farmed pastureland meets the moody Mount Arthur ranges. 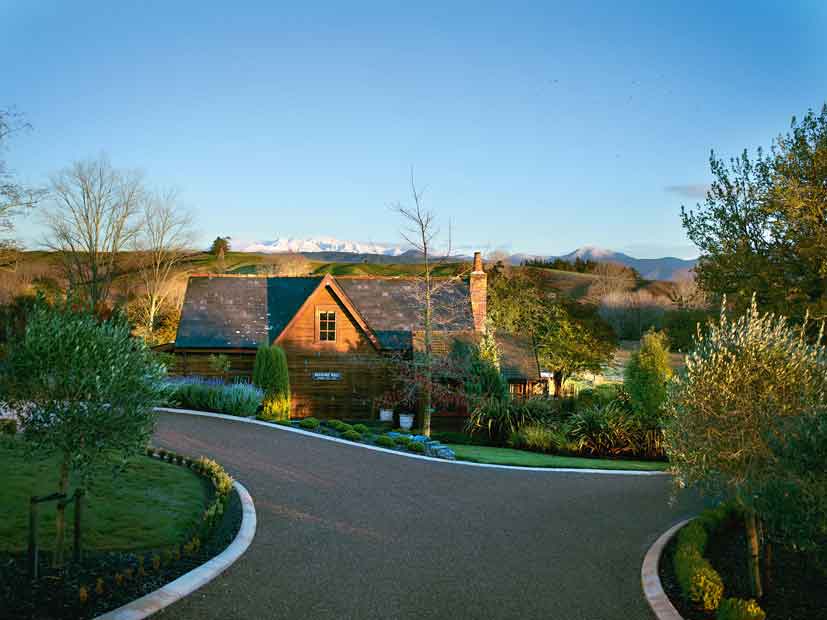 The building that occupies the land was constructed in 1870 as the original school, the simple wooden structure later re-designated as the community hall. In 2004, a wealthy, eccentric Englishman converted it to a picture-book home.

He piped Andrea Bocelli to the paddocks for his opera-loving sheep and nailed two pairs of worn-out boots to the ample girth of a splendid oak tree as symbols of his hard-graft dedication.

“We fell in love with the romance of the house and, because he liked us, the owner decided to sell to us,” says Jackie.

In a design where English sensibilities reign against a backdrop of colonial craftsmanship, the gabled skeleton remains but there’s a new sunroom on one side and a paved conservatory with petite-paned windows on the other.

Weatherboard cladding is made more substantial by a red-brick chimney, the Welsh slate roof and wooden shingles on the extensions.

Inside, pit-sawn rafters soar above the couple’s mezzanine bedroom and honey-toned matai floors are original. Six years after they bought, Michael and Jackie built a gallery in a like-minded architectural spirit alongside the house.
Since then, the pair has honed their business plan on intuition and observation. 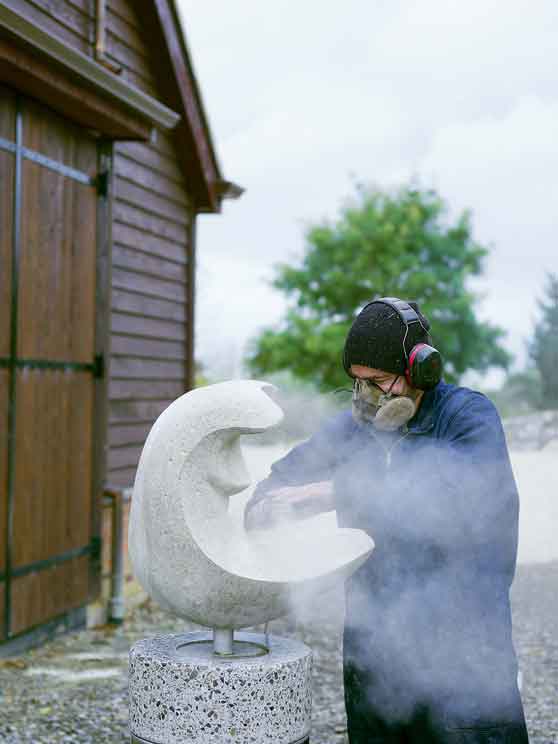 “I worked at Neudorf Vineyard right next door for a while and [owners] Tim and Judy taught me such a lot,” says Jackie. Each day after the couple return from a regular morning run through the tall, trailing stands of hops, she scans the gallery carpark for leaves. Keeping it immaculate is her self-appointed role: “Michael’s work is of such quality that everything needs to reflect that.”

The initial plan was for visitors to view the sculptor in action in one part of the gallery. But it was soon abandoned. He’s far more relaxed in his gumboots beneath a tarpaulin stretched from a shipping container in the paddock over the fence. Besides, sculpting large outdoor pieces takes robust, industrial effort.

Concrete aggregate, mussel rope, fused copper and mild steel are transformed by the orchestrated cacophony of angle grinders, drills and welders. The lost-wax process by which Michael creates limited-edition bronze figurines may be quieter, but it takes patience and many hours to reach the intricate finished result.

The fine art of sculpture-making is, of necessity, balanced by a bread-and-butter proposition the couple identified at the outset. Recycled French oak wine barrels from the neighbouring vineyard are shaped into country-style homewares. Hand-sculpted bowls, platters, cheeseboards and boot racks are the utilitarian objects of beauty that underpin the business. In the frosty breath of a winter morning, the pair makes an annual pilgrimage next door to gather grape prunings for a yuletide best seller – metal Christmas-tree frames wrapped in vines. Between running the gallery, keeping the homeware department well stocked, and operating their boutique B&B, this is the quintessential country life, without much leisure.

When the mood takes her, the couple’s daughter Poppy (12) joins in the enterprise, heading to the mezzanine studio above the gallery to paint or sew bookmarks, which she sells on Facebook. Making time for Michael’s grown-up children – Jordan, Roie and Neil – is just as important. They are always welcome to lunch at the dining table overlooking the valley. At Christmas, the grevilleas drop a festive red carpet on the lawn.

Life is idyllic at times, arduous at others, ever surprising. Jackie, whose late brother, photographer Gregory Crow, died in 2012, is determined to give it 60 seconds worth of distance run. 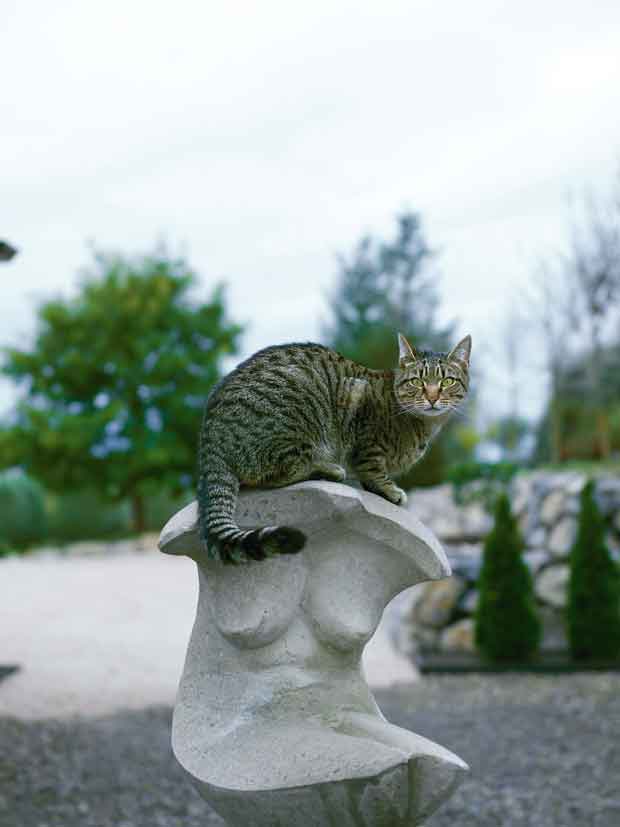 That could mean keeping up with customers – both face-to-face and virtually – pursuing her own ambitions in photography, pickling olives from their own grove, or a date with the secateurs so the topiary garden is well trimmed.
“When Gregory died, part of me wanted to pack up and run away in a campervan,” she admits. Instead, she’s made a commitment to helping this business fly; a huge heart powers this diminutive package.

For Michael, elbow grease, filing and fettling are all part of the everyday. At 53, he’s reached a stage where he has some perspective on his role in the creative chain of his family tree. “I think I’ve done my apprenticeship. I want to immerse myself in the bigger process now,” he says.