Finding paradise in Costa Rica, one of the happiest (and biodiverse) countries in the world 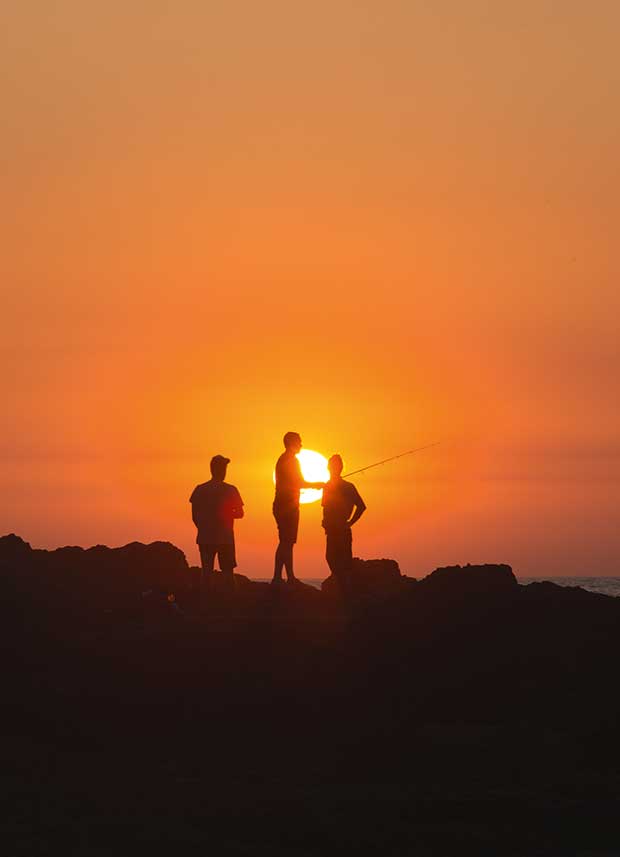 Costa Ricans are rightfully proud of their political freedoms and stable economy, which is largely dependent on eco-tourism. Rugged and rainforested, the country offers jaw-dropping scenery and striking biodiversity.

The guttural call of howler monkeys echoes through the trees as the hot afternoon sun beats down on Matapalo, a small northern Costa Rican town.

Around the central square — the only paved road — are a couple of rustic bars, a restaurant, a grocery store and two locals chatting under a shady tree. Modest houses with rambling gardens and compact fenced yards line the dirt roads that radiate from the square; pink bougainvillaea adds a pop of colour as it meets jungle foliage. We are with family — chef Frank Carroll (my partner Rick’s nephew) and his partner Tabitha, who live in the Guanacaste Province in northern Costa Rica. Expats from the United States, Frank and Tabitha run a private catering business for visitors in the tourist town of Tamarindo. A keen surfer, Frank is excited to drive us north of Matapalo, his 4×4 loaded with bouncing surfboards.

The Columbian drug lord Pablo Escobar — “the King of Cocaine” — once drove down this road, too, hiding out in a nearby hotel from United States and Columbian intelligence agencies.

We’re heading to the beach at Playa Bahia de Los Piratas, an area infamous long before the King of Cocaine hid here thanks to its popularity with pirates. Today there are no Jolly Rogers, just smoke wafting from a barbecue as a man cooks shrimp on sticks, which he serves with corn tortillas to visitors. The sea looks inviting, and as we paddle out through the warm surging waves, a large pelican dives then emerges with a silver fish. 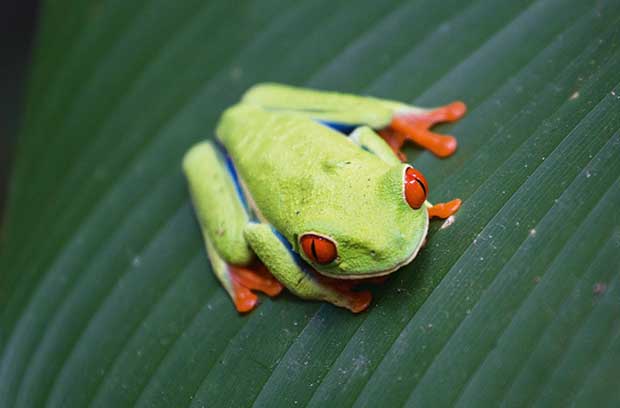 Costa Rica is known for its deserted white-sand surf beaches, volcanoes and fascinating wildlife. The nation’s diverse flora and fauna arise from its curious geological history — millions of years ago it was part of a land bridge between North and South America bordered by two oceans, the Pacific to the west and the Atlantic (Caribbean) to the east.

More stories you might like:
Photo essay: Images captured in Russian villages along the Trans-Siberian Railway route

Species from the two landmasses made their homes in the forests, wetlands, jungles and volcanic highlands resulting in some of Mother Nature’s most endearing curiosities. 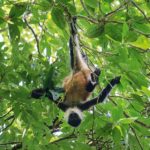 A spider monkey high in the canopy. 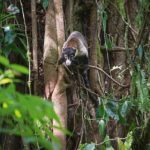 Coatimundi or pizotes are a member of the raccoon family notable for their long snout. 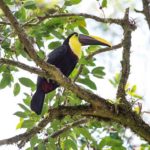 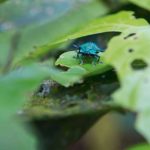 One such natural anomaly? Surfing crocodiles. Our first encounter with one of these reptile Kelly Slaters (“Kelly Gater”?) is a young crocodile swimming in the whitewater at Playa Avellana.

Curious to meet more of Kelly Gater’s relatives, we take a tour croc-hunting up the Tamarindo Estuary, a wildlife sanctuary and home to American crocodiles. 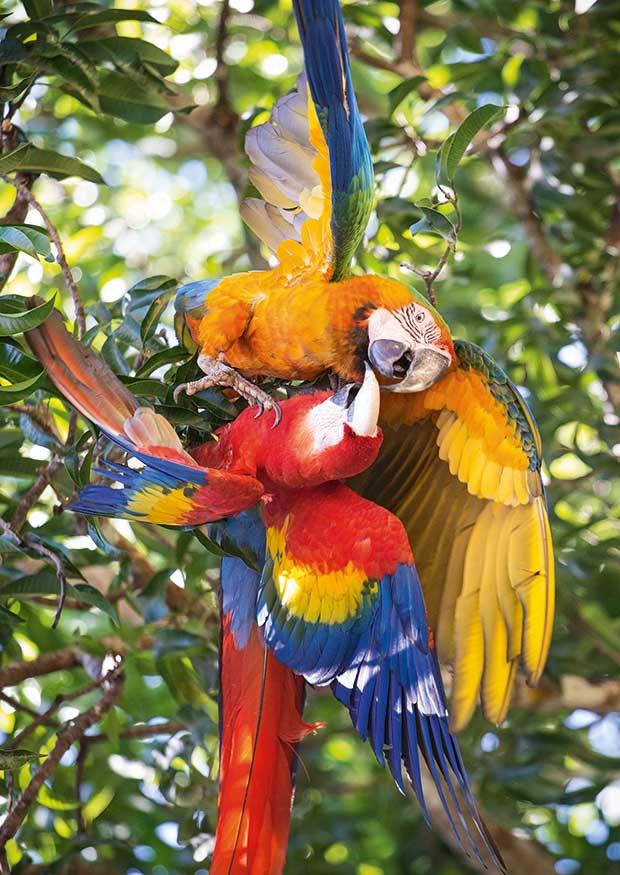 A screeching red macaw engages in an aerial battle with a blue-and-gold one.

We’re on high alert as our small, canopied boat glides up the estuary through towering mangrove trees. All is calm until I spot a semi-submerged dead heron mysteriously moving against the current.

Then I see them — the thin irises belonging to a pair of big reptilian eyes. A set of jaws open wide and jagged teeth clamp shut on the bird. As I focus on the crocodile, the heavily lidded eyes watch me intently. 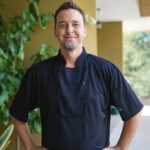 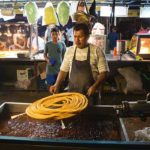 A tyre iron is used to remove churros from hot oil at Fiesta Brasilito.

Daniel, our captain, pulls the chord to start the motor. Nothing happens, and we discover the chord is broken, leaving our boat stranded. Quickly, Daniel uses his phone to call for help as we drift into the mangroves.

We wait to be rescued by another boat while I continue to lock eyes with the sleepy croc. 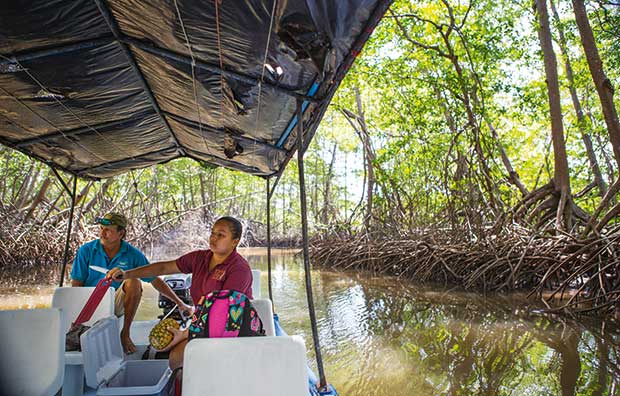 Crocodile hunting up the Tamarindo Estuary.

Towed back to shore, we decide to shake off our nerves with some local culture, Frank taking us to a traditional Tico fiesta. (Tico is the name given to Costa Ricans like Kiwi is to New Zealanders.) Each small town hosts a fiesta between November and July, with bull riding, traditional cuisine and a disco among the attractions.

Hot merengue beats are pumping as we survey the food on offer at the beachside town of Brasilito — mainly sizzling cauldrons of fried chicken and pork. In the shadows, colourful wooden-sided trucks hold bulls, quiet before they must survive in the ring. 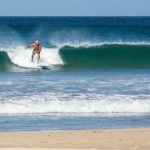 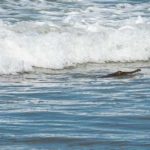 But here, Rick unknowingly shares the water with “Kelly Gater”, a young crocodile. 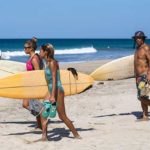 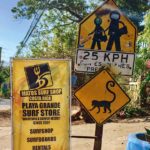 Signs of the times.

Perched on a rough plank up in the stand, we listen as the announcer winds up the crowd. Young men scatter as a bull charges around the ring. The bull bounces wildly and its rider loses his hold, falling and then scrambling to his feet. The bull then charges, tossing him like a rag doll into the air.

The rider lands hard and is motionless. He is quickly rescued by a group of men who run across the ring and shove him through a hole in the wall to a waiting emergency crew. We decide it’s time to make an exit. 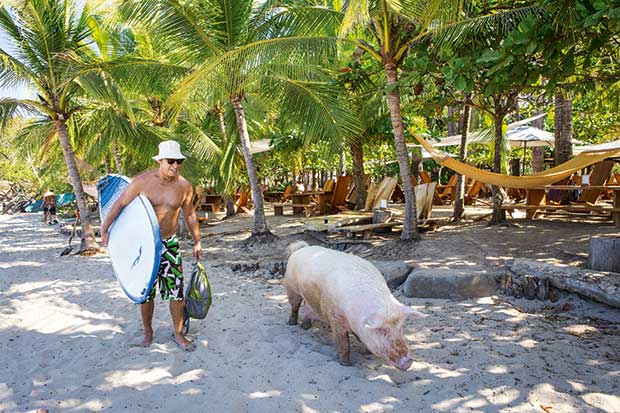 At Playa Avellana, Rick (the author’s partner) meets Lolita the pig, who also loves to swim in the ocean. Lola’s Restaurant in the background was named after Lolita’s round-bellied mother.

As if crocodiles and bullfighting weren’t enough, we dial up the drama with a visit to an active volcano at Arenal Volcano National Park. Costa Rica has six active volcanoes and more than 60 considered extinct or dormant. At 1633 metres, Arenal Volcano is still firing, with frequent lava flows following a large eruption in 1968.

A five-hour mini-bus ride away from the heat of the coast, the small town of La Fortuna is known as the gateway to the park and is the best place from which to access the many activities on offer, including hikes, hot springs, horseback rides and whitewater rafting. A howler monkey grazes near the author’s apartment.

When the clouds clear, the cone shape of the Arenal volcano looks a little like Mt Taranaki, except Arenal is surrounded by tropical jungle and exotic wildlife. The eco-friendly Arenal Observatory Lodge promotes sustainability and responsible tourism and provides tours for visitors.

We walk through the forest with a guide who turns over a large leaf to uncover a red-eyed frog and points out spider monkeys high in the canopy. A large toucan rests quietly in a tree oblivious to the fascinated humans below him. Hanging bridges span the river gullies, offering views into the treetops. 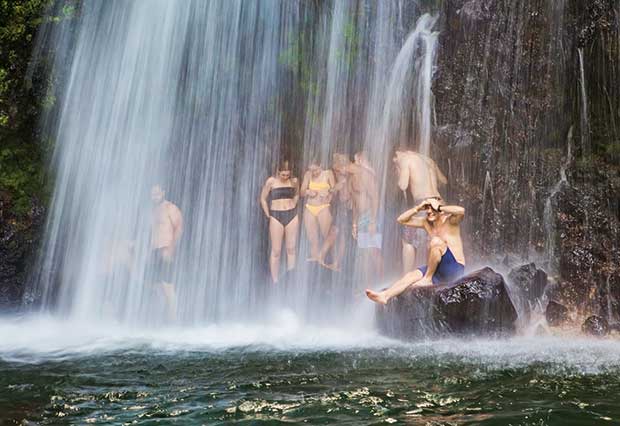 A massage shower under a waterfall is invigorating after a rainforest hike.

After our walk, we soak tired muscles in the natural hot springs in the Rio Chollin, lounging in a rock pool under a canopy of fluttering trees. Life appears comfortable in Costa Rica; the country has had no army for 71 years and is politically stable. The money saved from military spending is used for education, healthcare and as a social safety net. At Arenal, hanging bridges offer a view into the rainforest, home to more than 500 bird species.

We traveled to Costa Rica under the guise of a surf trip and discovered a country full of amazing wildlife and friendly, relaxed people. One of the most-used Tico phrases is “pura vida”, which means pure life. It reflects the Costa Rican attitude of a simple life filled with colour.

Getting there: We flew Air New Zealand to Los Angles, spent a night and then flew Alaska Airlines to Liberia in northern Costa Rica. There are flights to Costa Rica from a number of other United States cities.

When to go: Costa Rica’s dry period or “verano” is January to April; the rainy winter or “invierno” is May through December. Summer is the busiest time thanks to the number of North Americans escaping their winter. April is hot in Guanacaste (30°C to 37°C). The less-touristy rainy months are known as the “green season” and can be a good option as it often only rains for a couple of hours in the afternoon. Arenal Observatory Lodge was built in 1987 as a scientific research station for the Smithsonian Institute to observe the activity of the Arenal volcano.

Safety: Costa Ricans are welcoming, and it is safe to travel. But don’t leave valuables in cars or on the beach. Driving at night can be difficult as there are many hazards on the roads, i.e. no streetlights, many pedestrians, free-roaming dogs, and rugged terrain.

Visit: Take time to visit at least one of the 20 national parks such as Arenal Volcano, Monteverde Cloud Forest, Corcovado or Rinċon de la Vieja. Explore volcanoes, wildlife, birds, endangered turtles, crocodiles and so much more. The Arenal volcano is the centrepiece of the town of La Fortuna.

Don’t worry, be happy: Costa Rica is 51,000 square metres — about half the size of the North Island — and has a population of 4.9 million. In 2018, National Geographic named it the happiest country in the world. It ranked 12th on the United Nation’s 2017 Happy Planet Index.