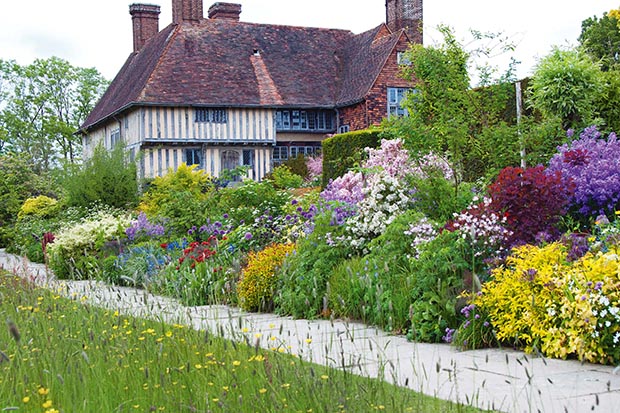 The long border at Great Dixter in June with the house as the backdrop.

When a legendary gardener dies, what becomes of his or her garden? Ask Fergus Garrett, the guest speaker at November’s Nelmac Garden Marlborough

“There are two lasting bequests we can give our gardens,” wrote the German poet and philosopher Johann Wolfgang von Goethe. “One is roots; the other, wings.”

Okay, I admit to taking liberties with Goethe’s quotation, which originally applied to raising children, for gardening has many parallels with parenthood. Some gardens, like some children, do as they are told. They’re well-behaved and respectful, their shoeshine never scuffed, their hair neatly brushed. But others are raucous and rebellious, causing their parents quietly to rue their creation. When it’s your own garden – or child – you can forgive them for showing off or occasionally stepping out of line. But what if you’re awarded full custody of someone else’s little darling? What then? 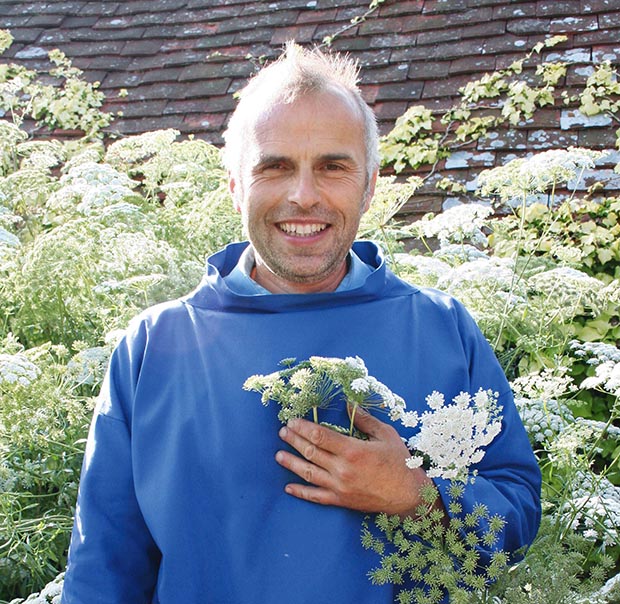 Fergus Garrett in front of a bed of Ammi majus

Ask Fergus Garrett, head gardener at Great Dixter in East Sussex, home of the late, legendary Christopher Lloyd, and he’ll tell you to keep calm and carry on experimenting.

Christopher Lloyd, known to his friends and the horticultural cognoscenti as “Christo”, was the original enfant terrible of English cottage gardening, a man who encouraged hedgerow weeds such as cow parsley to rub shoulders with shrubs in herbaceous borders, but who, by his death in 2006, had evolved into an elder statesman, or at least a kindly eccentric uncle, with Fergus as his protégé.

Fergus, this year’s guest of honour at Nelmac Garden Marlborough, has now spent more than half his life at Great Dixter. He’s accepted his late mentor’s mantle and is now famous in his own right as an adventurous plantsman, lecturer and Chelsea Flower Show judge. A pot display in Great Dixter’s walled garden, which changes every three to four weeks.

Fergus was a teenage horticulture student when he first visited Great Dixter, notebook in hand. He was invited back for one of Christo’s legendary weekend-long parties (imagine the Bloomsbury Set arguing over bulbs and perennials rather than books and politics) and their friendship morphed into a symbiotic partnership.

There was never any doubt that he’d continue at Great Dixter after Christo’s death. “The garden isn’t the same, of course. But I think it has the same spirit and atmosphere and joie de vivre. There’s a familiarity but it’s different. Great Dixter was always fluid, even when Christo was still alive. No garden should be set in aspic.” In high summer, when the long border – all 64 metres of it – is at its glorious peak, it’s not unusual for visitors to burst into tears at first sight of it. “That seems to happen when the garden is at its wildest,” says Fergus.

“It’s extraordinarily moving. But then others come here and say, ‘Oh my god, this is a mess.’”

He’s not exaggerating; flamboyant gardens often polarize the public. I took a tour group to Great Dixter in the early 2000s and, because it’s within driving distance, we stopped at another of the UK’s finest gardens, Vita Sackville-West’s Sissinghurst Castle, on the way. 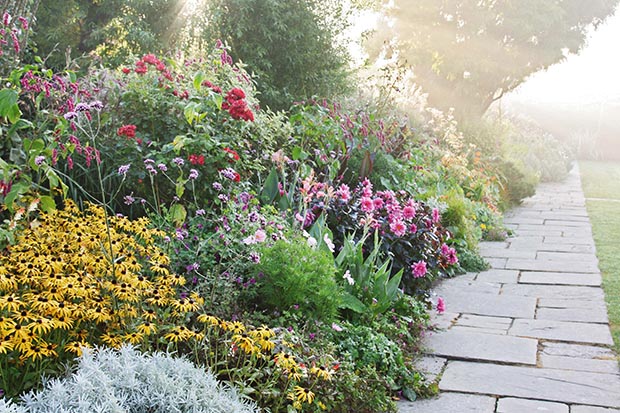 Sissinghurst looked pretty enough that day but Great Dixter was fantastic, with a tropical border of bold foliage and vibrant flowers. I loved it, but some on our tour were openly hostile to its clashing colours, especially when they spotted the caster oil plant (Ricinus communis, a noxious weed in New Zealand) sidling up to golden-striped cannas.

“We’re always doing things people don’t approve of,” admits Fergus. “And, if anything, the garden has an even wilder look to it now.” The famous porch of the 15th century Great Dixter House.

An equal-opportunity plantaholic, Fergus has a fetish for all things great and small. “I like plants with character and anything umbelliferous, but I don’t just like big, butch muscular plants. I like soft little things too. If I gardened on a rock, I’d love to grow little alpines in the crevices.”

Are there any plants he just can’t stand? “Indeed,” he says, adding a sly aside, “and some people, too.” Fergus staking on the long border

GARDEN HINTS FROM GREAT DIXTER’S FERGUS GARRETT
* The secret to good border control is succession planting, he says, by which he means integrating permanent plants with a multi-layered, more transient community of bulbs, self-seeders, ferns and perennials that rise and fall over the course of the season.
* Be inquisitive and extend your planting palette. “Who wants to eat the same thing, day in, day out?”
* Put aside any sense of snootiness and find good in every plant, even a dwarf conifer. “I’m playing with them the way Christo played with bright dahlias and cannas.” NELMAC GARDEN MARLBOROUGH
Hear Fergus Garrett in conversation with Australian designer and garden writer Michael McCoy on Friday 10 November, 6.30pm, or at a special lecture on his plant passions on Sunday 12 November from 9.30am to 11.30am. Tickets on sale at gardenmarlborough.co.nz