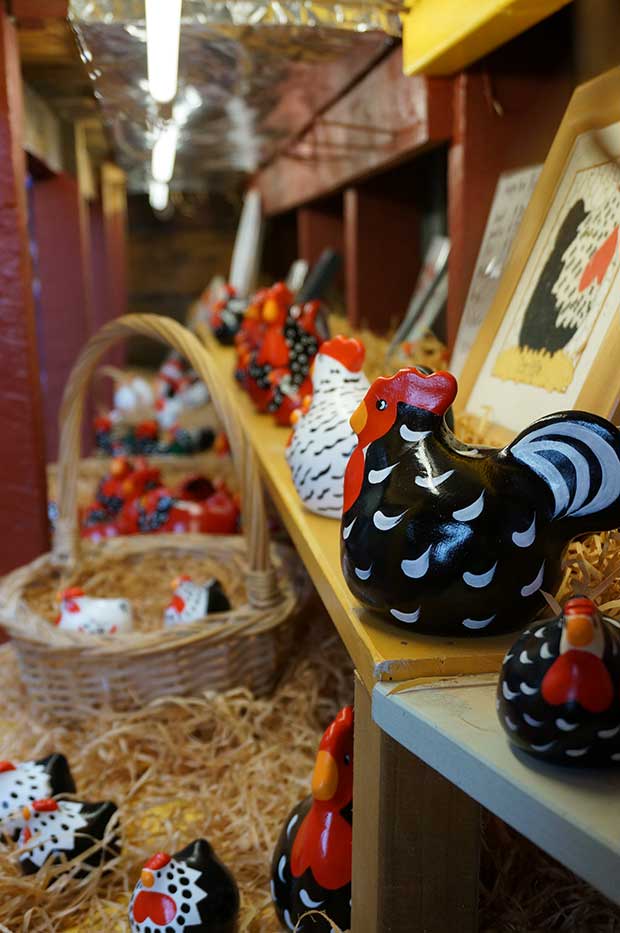 “Happy is a magic word,” says Yvonne who believes that’s one of the reasons her pottery poultry – made in Portobello, Dunedin – has been so popular for 34 years. “Nearly everyone has warm, fuzzy stories about hens; people project their happy emotions onto them.” She says all cultures can relate to hens and roosters, rather than, say, pukeko or parakeets. “I’ve been asked to do things like kiwi and sheep over the years, but no, we’ve stuck to our hens – and that’s been part of our success.” 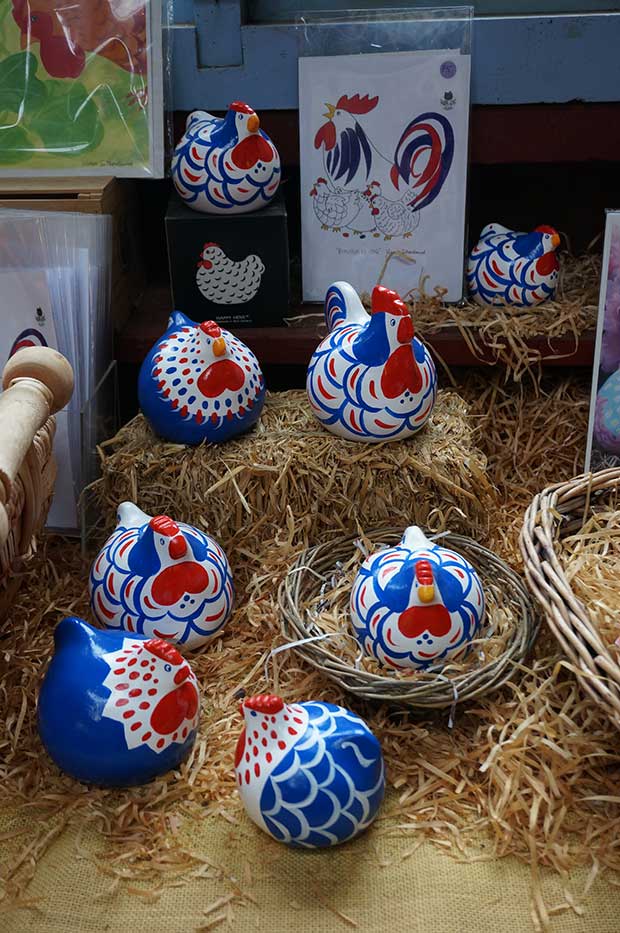 Yvonne has warm associations with hens; her grandfather kept them and she still has a couple of her own. They give her endless amusement and inspiration however the creation of Happy Hens was unintentional. The business fledged nigh on three-and-a-half decades ago, so Yvonne is understandably fuzzy about the details.

“I was an art teacher and surrounded by colour and design. I think it was a spin-off from the clay-modelling lessons I did with the kids. When the subject was birds, well, I rolled a hen. Then I probably thought, ‘How am I going to decorate this?’” 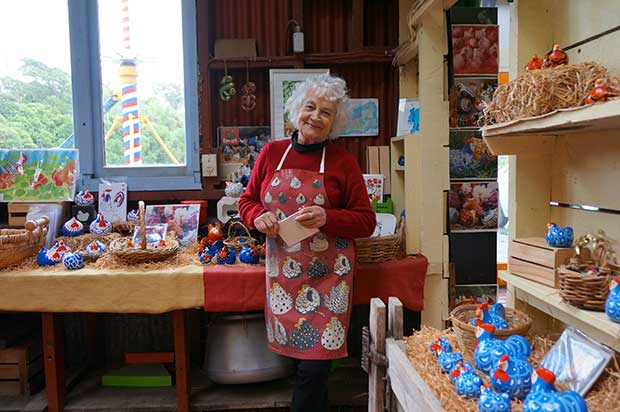 Yvonne is interested in social history and learned there were many decorative heritage hens that colonial women brought out to New Zealand. “I based some of my first designs on them, combining my interests of art, history and hens, and started selling them at markets. From there it caught on as Happy Hens and grew like topsy.” So did the range on offer. While Yvonne’s bestsellers are heritage hens – such as the wyandottes, pencilled Hamburgs, Norfolks and black anconas – she often gets creative to support special events. 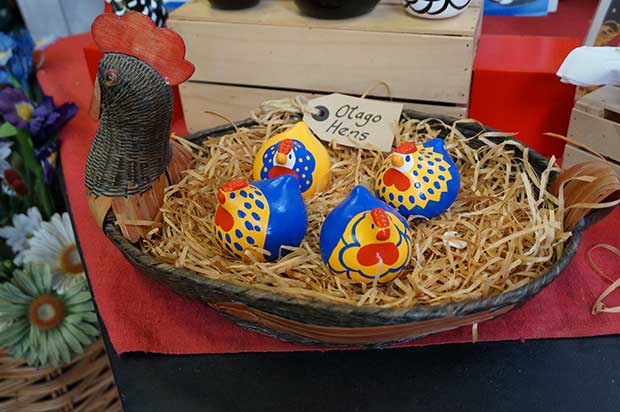 There’s a yellow and blue Otago hen – “I’ve just painted a whole lot to go to someone’s family reunion in Scotland” – a tricolour French hen, and when popstar Pink was in town, bright pink versions sold very well indeed. She even produced a set representing the nations in the Lions rugby tour. For Happy Hen’s 25th anniversary Yvonne dreamed up a silver-grey dorking hen. For the Year of the Rooster she painted a red and gold rooster and after the Christchurch earthquakes, a black and red hen raised $1500 for recovery efforts. “Some people really like the traditional ones but the wackier ones sell really fast. I’ll also paint in any colours to order,” she says. 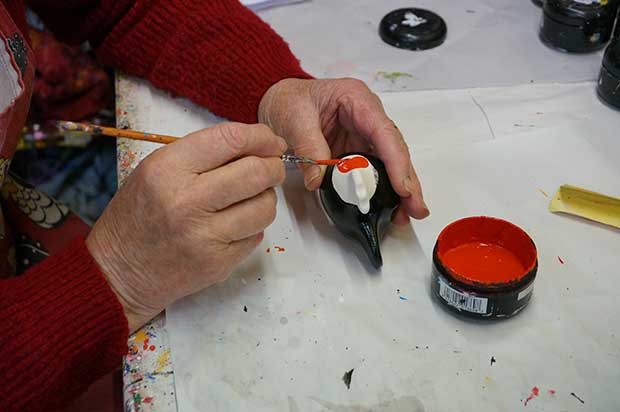 Yvonne’s hens have inspired their own clutch of picture books. About 20 years ago, she illustrated her first few where Joy Cowley wrote the story. Recently she produced two more, taking both roles this time. Called Sand Saucers and Jump Up, Fly Down, they’re prompted by the antics of her own hens and are available from her delightful shop/workroom in Portobello or online. 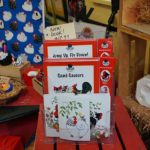 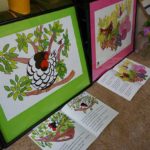 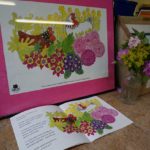 The hens also feature on plates and mugs, tea towels, greeting cards, tiles and fabric – “Give me a surface and I’ll put a hen on it” – and her family of poultry are truly world travelers. “I’ve sent hens to Finland, Canada, and Czech Republic. I’ve also heard a hen spotted in a farmhouse on one of the islands beyond the Isle of Skye.” 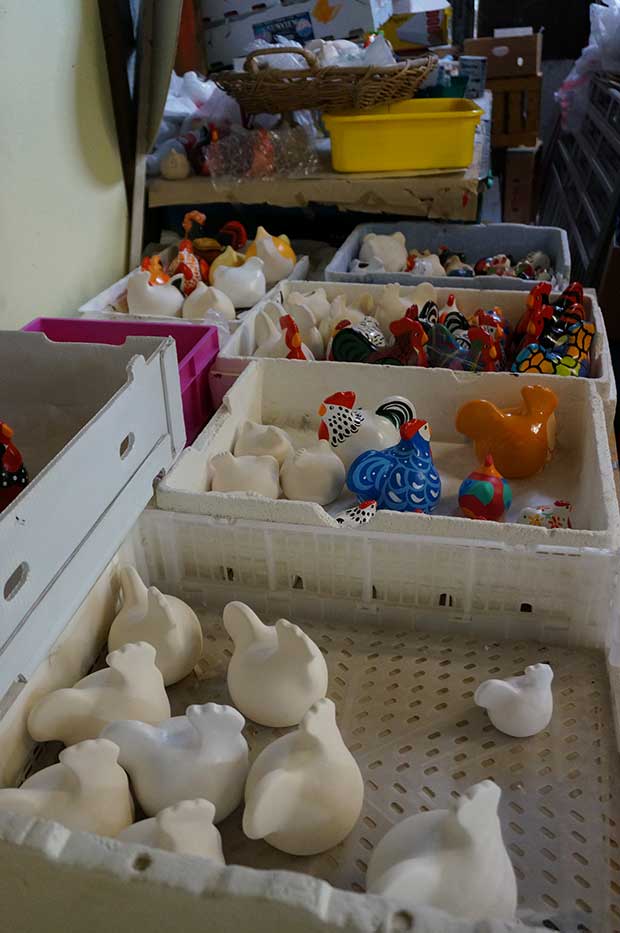 Most customers are Australian, American and European, and New Zealanders, of course, all drawn along the harbour road from Dunedin central to Portobello by a love of hens. “A wee while ago a Japanese film crew came in and a beautiful young actress painted her own hen. The segment was shown on a Japanese travel show,” says Yvonne. Over the years, the stylised hens have become highly collectable.

“People from around the world come in saying they’ve built the hens shelves or wee houses.” Fans span the ages and genders and, to keep up with demand, Yvonne and her assistants hatch about 10,000 Happy Hens a year. The team sit companionably applying high-gloss enamel colours to the slip-casted, bisque-fired birds produced in Yvonne’s kiln, to her original mould. 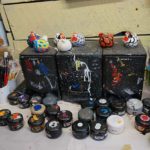 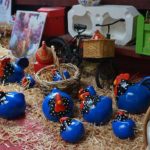 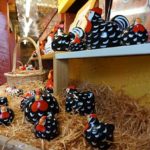 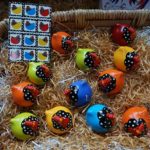 Painting each hen takes only a few minutes but trays of hens are done at once, layering on the paint, giving each coat time to dry. “I’m limited in what I can produce because I don’t have a big workforce. But that’s absolutely okay. I’ve been trying to ease back a bit, but it doesn’t seem like I can,” says Yvonne, appearing unperturbed about her ever-elusive retirement. Besides, she enjoys the process. “We sit here quietly painting, talking to customers and listening to the radio. It’s like occupational therapy.”