How Tuhoe is leading the way in sustainable design

THE STORY BEHIND THE BUILDING
Seven years ago Tūhoe spearheaded a “Where to from here?” conversation with its people as part of developing a new generation blueprint.

Change was imminent – negotiations were underway with the Crown in the lead-up to the Tūhoe Deed of Settlement (2013).

Tūhoe was searching for a way forward that would replace the iwi’s historic sense of hopelessness and loss with new optimism. The concept of a new central headquarters for Tūhoe – the first for centuries – emerged as part of the blueprint dialogue. WHAT IS TE KURA WHARE?
The headquarters and meeting place for the people of Tūhoe, the iwi whose traditional land is the remote forested landscape of Te Urewera in the eastern Bay of Plenty, including Lake Waikaremoana.

Set on the outskirts of the tiny settlement of Tāneatua, a 15-minute drive south of Whakatane, Te Kura Whare is the 15th building in the world to be certified as a Living Building.

A Living Building is a super-green quadruple net positive building which generates renewable energy, collects and treats its own water and is constructed from non-toxic materials. In essence – it has no environmental footprint. 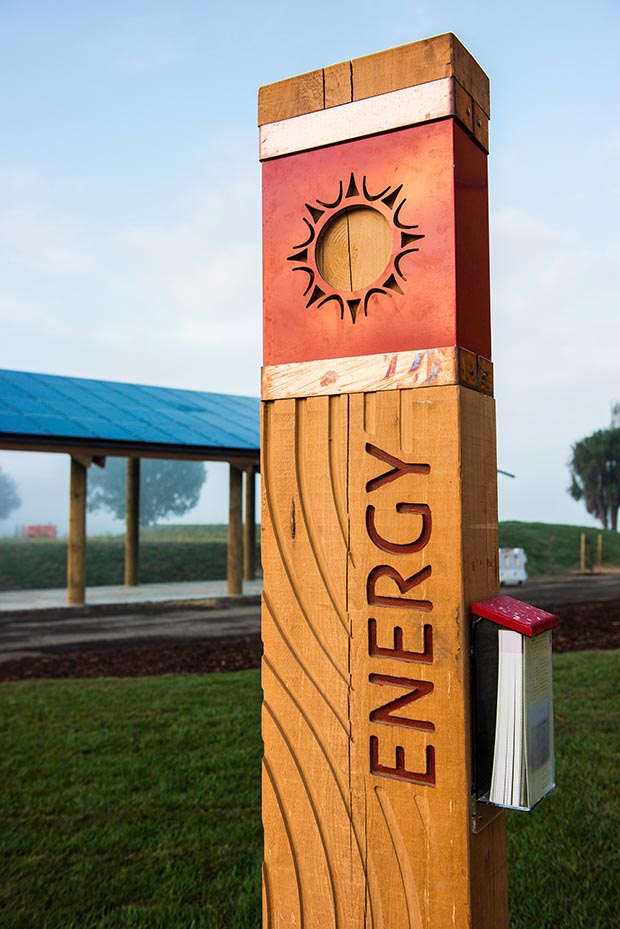 While Te Kura Whare is an administrative hub, it is also a symbol of hope and a place of lightness that shelters Tūhoe’s future.

Te Kura Whare comprises a tribal chamber (seating for 500), library/archives, meeting rooms, a café, and a shared māra kai (garden) of vegetables and fruit trees for the kitchen and local community. The natural amphitheatre in front of the building seats 3000 people.

Te Kura Whare is not a marae. Tūhoe wants the building accessible to all people – devoid of intimidation for visitors who may not be versed in marae protocol.

THE DRAWING OF AN ARCH A 23-metre waharoa or arch spanning the front entrance to the building, made of non-toxic FSC laminated local pine, represents Te Mana Motuhake o Tūhoe – the identity of Tūhoe intertwined with its whenua or land – and symbolizes the rising of the sun, the continuity of life, whakapapa and the safety of light out of darkness.

“When Ivan (Mercep, the architect) met with Tūhoe for a second time he drew a simple arch on a white board with a black pen – one arch was upwards as it now appears on the building and the other was the reverse. He asked us how the two designs made us feel. The first said ‘Come, move forwards, welcome’ and the second spoke of defensiveness. Ivan showed us that shapes and structures can inspire, raise and lift us up.” – Kirsti Luke, CEO, Ngāi Tūhoe. 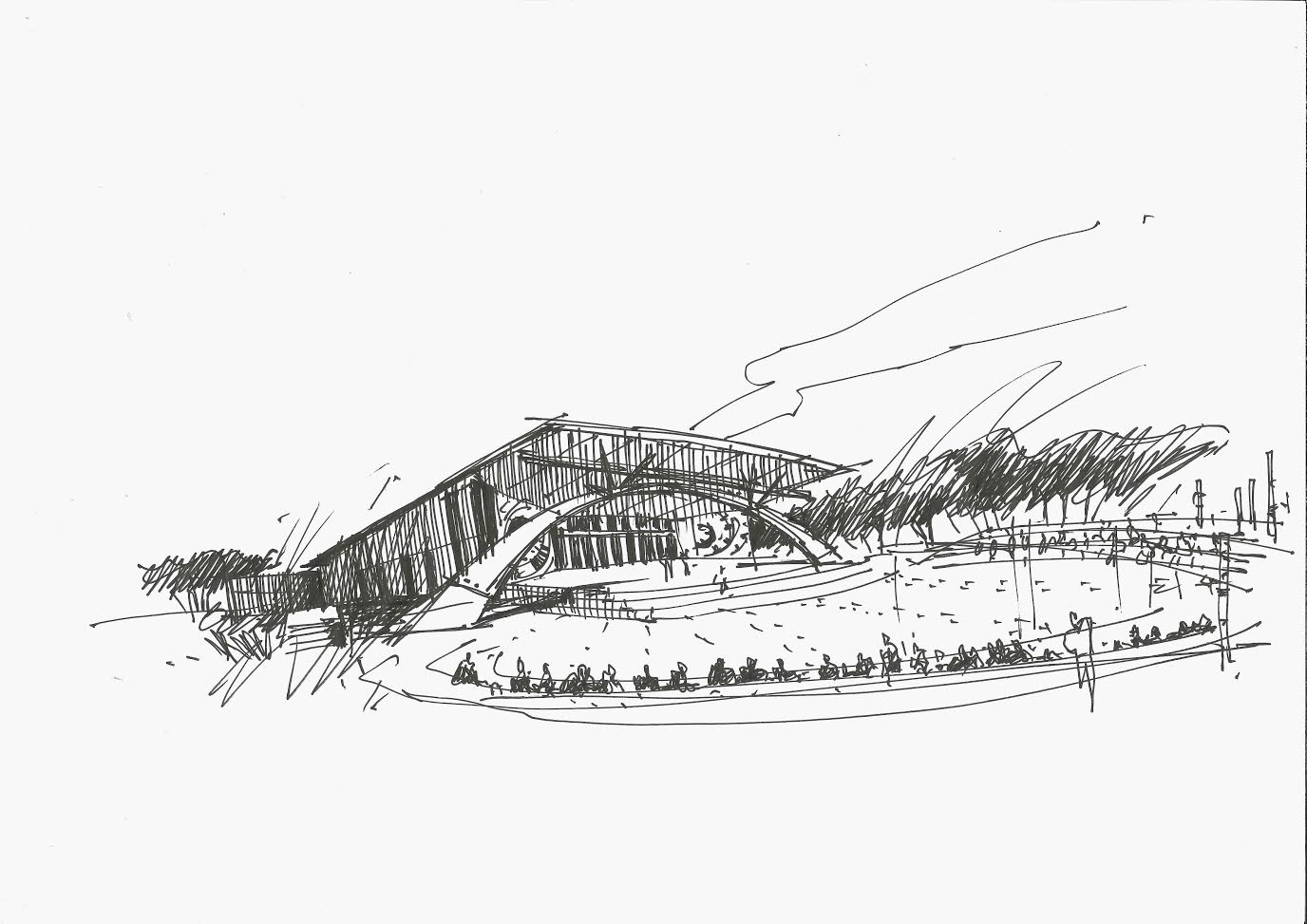 FINDING THE ARCHITECT
Tūhoe put an advertisement in the Whakatane Beacon calling for proposals from architects interested in designing the new Tūhoe headquarters.

“We thought no one would reply because they would never have heard of Taneatua but we had 49 responses. We short-listed five. When architect Ivan Mercep of Jasmax first walked through the door at our temporary office at Taneatua he was humble and full of humility. He didn’t look us in the eye. He understood that this building wasn’t a building but a vehicle for hope – a way to disrupt the despair of our iwi. He brought nothing on paper – instead he asked, ‘What does Tūhoe want?’ We felt at once he was the man for the job.” – Kirsti Luke, CEO, Ngai Tūhoe

Ivan Mercep died a month after Te Kura Whare was completed. He was able to watch the opening via Skype. 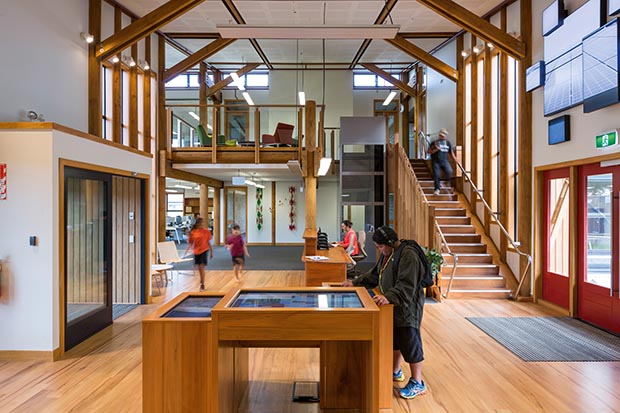 SPIN-OFFS
The project employed 59 locals and attracted more than 80 community volunteers. Members of Tūhoe traveled from as far away as Australia to assist.

Several manufacturers have since removed chemicals from their products after supplying toxin–free options to Tūhoe.

Skills honed during the project included scaffolding, the construction and laying of earth bricks, landscape planting and knowledge of species for waste-water treatment, carpentry, painting, insulation, native timber sourcing and milling. Some Tūhoe trained during the project have pursued trades. 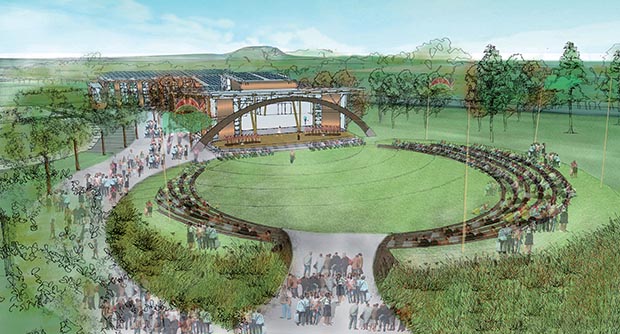 ‘The Crown apologises for its unjust and excessive behaviour and the burden carried by generations of Tuhoe who suffer greatly and carry the pain of their ancestors.’ At Taneatua, August 2014.  Drawing by Senior Architectural Graduate, Lars Von Minden

A POTTED HISTORY OF TUHOE

Tūhoe did not sign the Treaty of Waitangi in 1840. Despite having no mandate, the Crown assumed control over Tūhoe land.

Following a tragic history of interaction, Tūhoe and the government reached a settlement in 2013 – including financial redress of $170 million, an apology from the Crown and the right to manage Te Urewera National Park in partnership with the Crown.

Tūhoe has a population of about 40,000. Today 83 per cent live outside Te Urewera – many displaced by the ramifications of the past. Of the 4000 who remain within Te Urewera, a large proportion suffers from severe socio-economic deprivation. 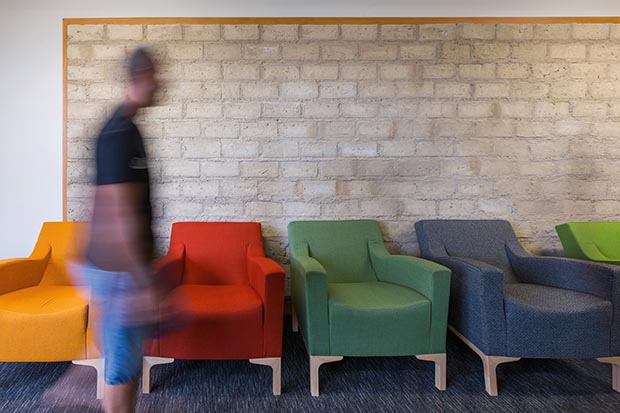 ❯ 95 per cent of the building is timber.

❯ Its frame and structure are built from whole pinus radiata logs (rather than steel) sourced from nearby Kaingaroa Forest.

❯ Fallen matai, rimu, tawa and totara found on the forest floor and in local rivers is present – all wooden furniture and fittings are crafted from native timber.

❯ The building has 352 solar panels – one of the largest grid-connected photovoltaic solar set-ups in Aotearoa – and generates 110,000 kilowatts of electricity per year.

❯ Grey and black wastewater is treated onsite via septic tanks and an adjacent constructed botanical wetland – the system handles 5000 litres a day.

❯ There is only one small domestic heat pump in the 2200-square-metre building.

❯ The building is shut down and sealed at night to retain heat in winter, and pre-cools via vents in summer.

❯ All 750 materials used in the build were scrutinized as part of LBC’s Red List of  toxic chemicals.

❯ 70 per cent of the construction budget was spent within a 100-kilometre radius of Taneatua.

❯ 90 per cent of waste was diverted from landfill during the build.

❯ The project had a two-year planning phase and a 13-month construction phase. WHAT IS A LIVING BUILDING CHALLENGE (LBC)?
① The LBC is a stringent green building standard – the most advanced international measure of sustainability in the built environment.

② It demands that buildings be self-sufficient, produce more energy than they use and collect, and treat all water on site.

③ It is viewed as a platform for deep, innovative change in the building industry.

④ The LBC uses the metaphor of a flower as a framework, with seven performance areas called petals – place, water, energy, health and happiness, materials, equity and beauty.

⑤ It is underpinned by social justice, cultural richness and ecological restoration.

⑥ It emerged in North America in the mid-1990s.

⑦ Tūhoe has pursued an LBC because its cultural values of kaitiakitanga (respect for the land) and engagement with the natural world are strongly reflected in the standard.

⑧ Te Kura Whare received its LBC certification in May 2017. It is the first fully certified Living Building outside of the United States.

LEARN MORE
· Te Kura Whare, 2 Tūhoe St, Tāneatua. The building is open to the public during the week for tours. ngaituhoe.iwi.nz/te-kura-whare

· Ever The Land – an award-winning documentary spanning the background and build of Te Kura Whare. evertheland.com