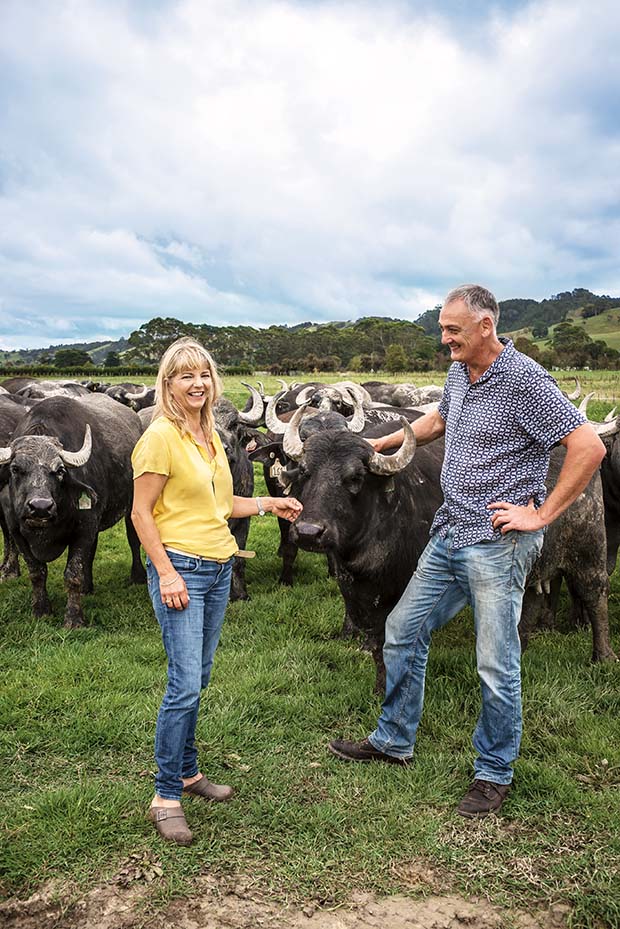 It’s impossible not to eat this soft and silky fresh cheese without letting out an involuntary moan of pleasure. It’s moreish  but not cloying, with a subtle hint of thyme and black peppercorns. It looks like feta, but it has a velvety texture and a clean after-taste. It’s also impossible not to finish up a jar in one sitting.
Not surprisingly, the people behind this marinated fresh buffalo cheese, Richard and Helen Dorresteyn of Clevedon Buffalo Co, think it’s “terrifically exciting” too. But then, they always knew they were on to a good thing. 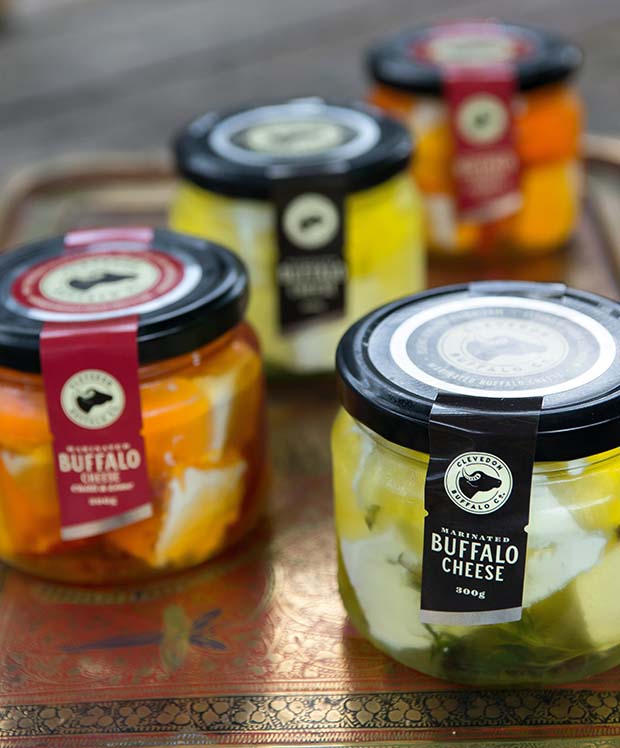 “Buffalo milk is so beautiful – the sweetness, the texture, the lightness on the palate – so one of our rules is that unless the cheese is going to embody those characteristics, don’t bother,” Helen says. “It’s a lovely product and so versatile. I’d been pestering Richard for four to five years to make a marinated feta. We worked on it and then realized we got a better result from marinating a fresh cheese. He’s very clever; I just need to give him a good shove sometimes. That’s how we work.”

There’s no doubt there’s more to it than that, but Helen’s strategy obviously works because Clevedon Buffalo Co is the Supreme Champion of the Outstanding NZ Food Producer Awards 2018. Its Clevedon Marinated Buffalo Cheese also won the Dairy section of the awards. Judges praised the fresh cheese’s uniqueness, well-balanced flavours and outstanding texture. Another summed it up in just three letters: “OMG”. 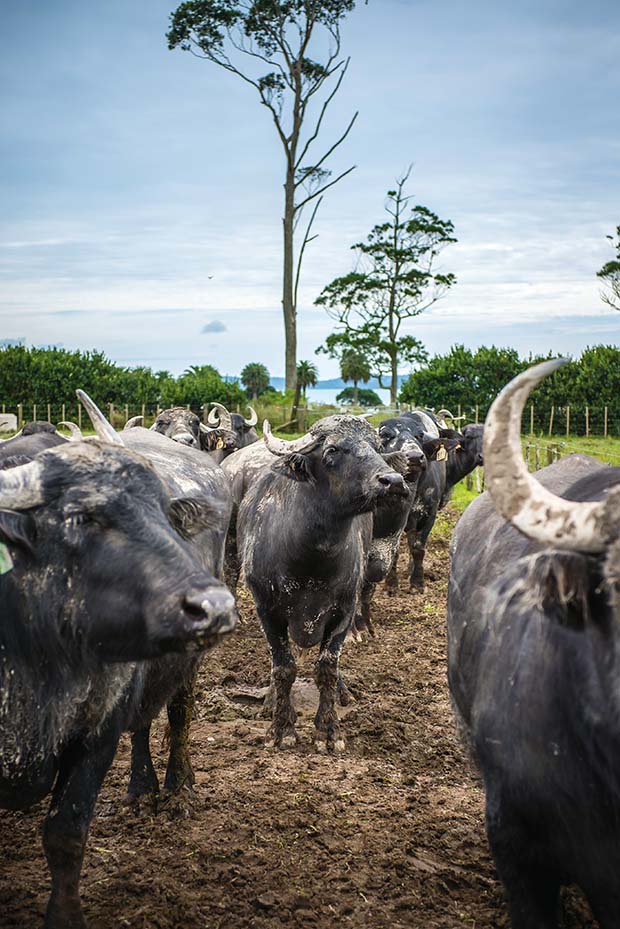 The Dorresteyns are no strangers to winning awards – their fresh cheeses and yoghurts have been claiming medals since they launched on the market a decade ago. In addition to winning the Champion of the Dairy category in these awards, Clevedon Buffalo Co was awarded the Champion of Champions Cheese Award – Artisan category, at the 2018 NZ Champion of Cheese Awards for their Clevedon Buffalo Ricotta (actually they won four awards including one of the two supreme awards). But that doesn’t mean it has been an easy ride.

“We’re doing the whole damn lot,” Richard says. “We had to learn how to farm these animals, we had no back up, and we couldn’t just go to someone else in New Zealand to ask for help. It’s a seven-days-a-week thing; we live and breathe it.” 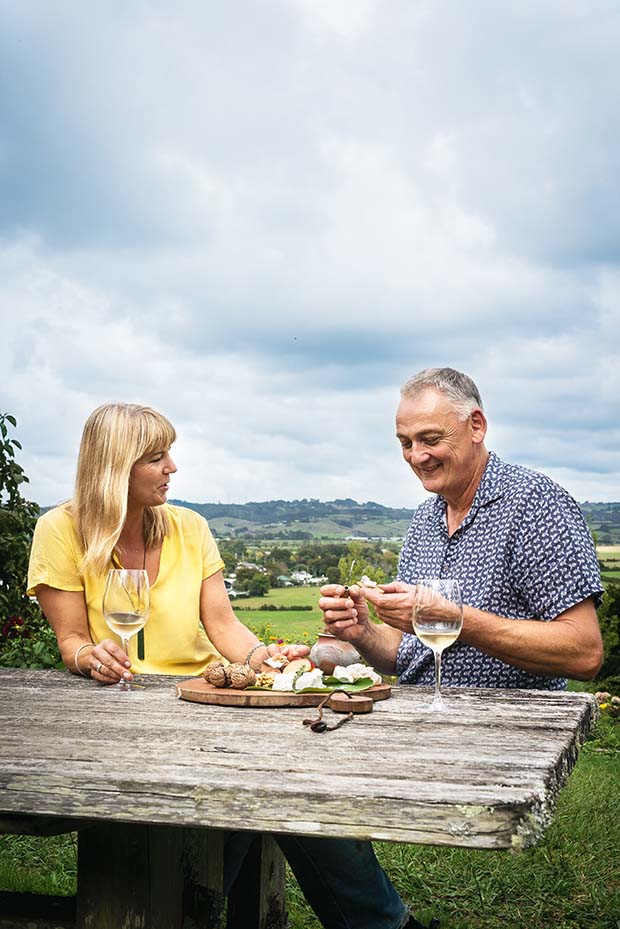 The story of how this couple became respected cheesemakers – not to mention buffalo farmers – begins in 2005 when former art teacher Helen decided Clevedon needed a farmer’s market. She and Richard, an industrial electrician, had taken a month’s holiday in the South Island and she was blown away by the markets they found.

“It struck me that we were living in this place with all these growers, but there was no respect for what they did,” Helen says. “They’re wonderful now, but back then the local supermarkets in Papakura had terrible fruit and vegetables. It felt like they waited for all the produce to go off and then sent it to south Auckland. I was growing a lot of stuff in my garden and I couldn’t sell it anywhere – and I thought, ‘Bugger it, we’ll have a market.’”

It took a lot of door-knocking to convince the community, but gradually the idea gained momentum. When Helen realized there was a cheese-shaped hole in the market, she turned to Richard for help. 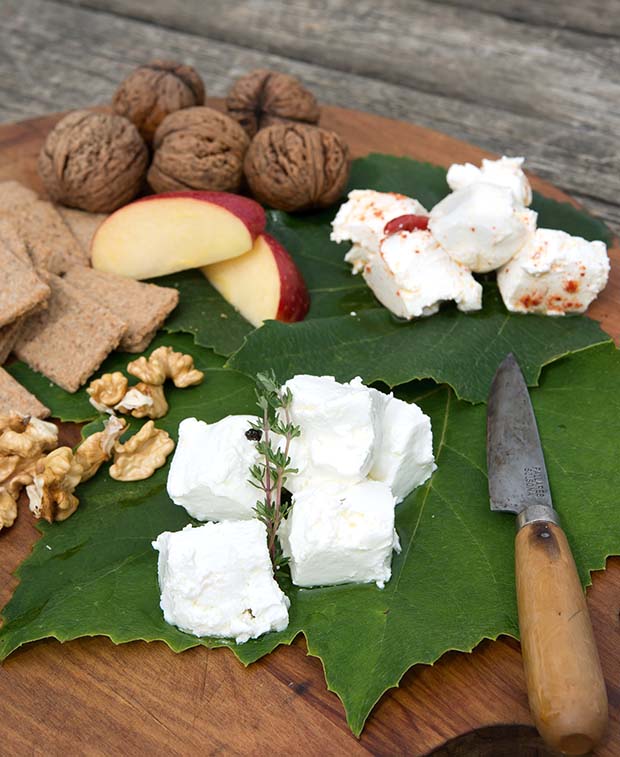 “He said, ‘Ok darling, I’ll make cheese for you.’ There were plenty of cow, goat and sheep cheeses, so we knew we had to do something different and fresh.”
It sounds like a whim, but it was also a calculated move. The Dorresteyns knew they needed to make something that couldn’t be imported cheaply. “We knew that if we made something that needed to be that fresh then we had to have a trading advantage that would justify the risk,” Helen says.

They saw buffalo mozzarella as the obvious choice: “We’d had it in Italy and we’d had it in New Zealand and there was a striking difference between the two.”
But first they had to find – and import – the buffalo, not to mention suddenly give themselves crash courses in dairy farming, cheesemaking and owning a small business. “We were much, much younger, we had paid off our mortgage and we thought we were absolutely and utterly bulletproof,” Helen says. 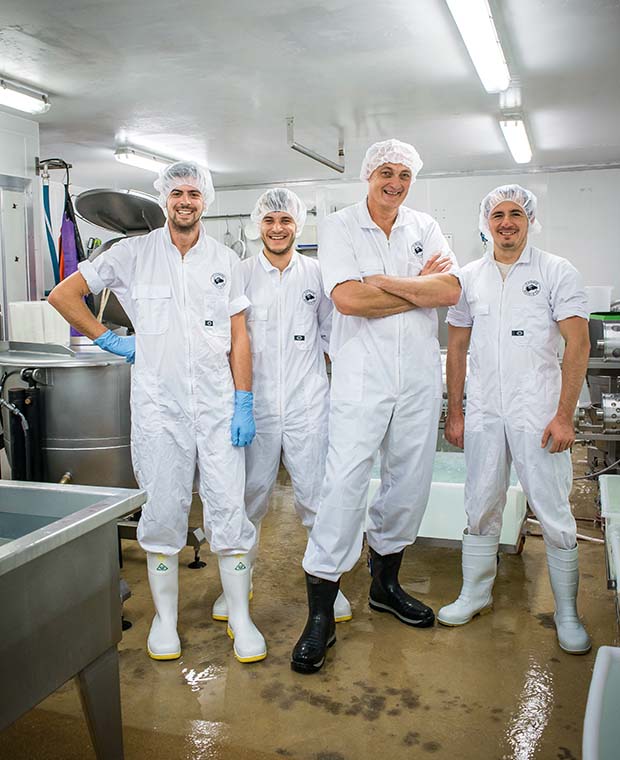 The couple initially imported 60 riverine buffalo from the Northern Territory, aided by “an old guy called Buffalo Bill”. The process was hugely educational, but tortuous and expensive.
“The process of getting them here was very long,” Helen says. “By the time we got the animals over, each one probably owed us about $10,000.” They thought making the actual cheese would be simple by comparison.

“We did a cheesemaking course with Katherine Mowbray where you magic up some mozzarella in about half an hour. We thought, ‘That looks easy.’”
Reality bit hard on both fronts. The buffalo were producing a measly average of three litres each a day (“we were going broke fast”) and the cheeses the couple were making weren’t up to scratch.

“We started making mozzarella and ricotta straight away but didn’t release it for years because we weren’t satisfied with it,” Helen says. “One day it would be perfect, the next crap. Everyone was interested and there was phenomenal pressure to get it out there, but we had to wait until we got it right or the industry would be written off.” 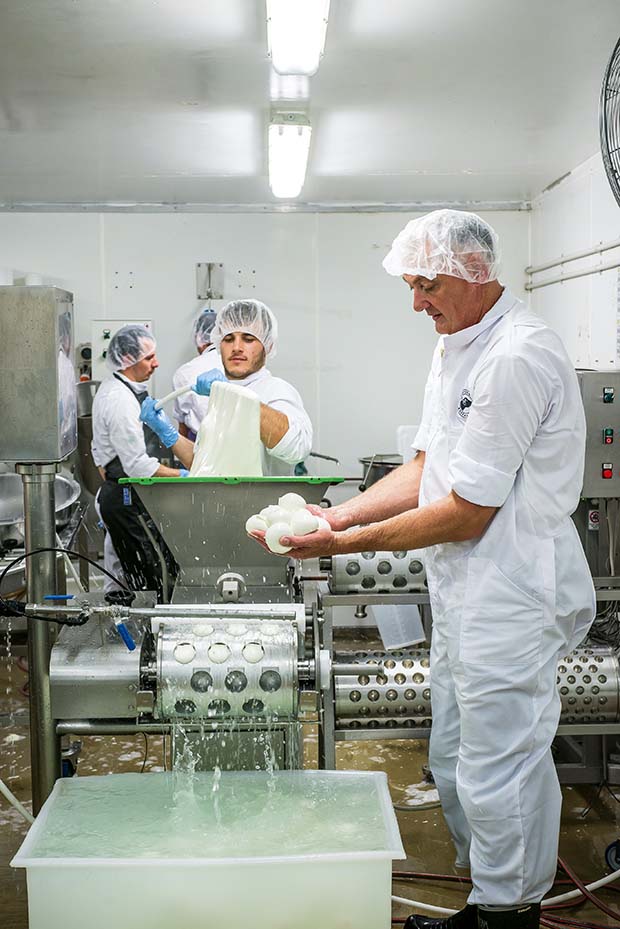 Salvation came in 2008 after they took off to the World Buffalo Congress in Italy and received tutelage from a mozzarella expert. Thus empowered, the couple returned to Clevedon and hired
a former Fonterra cheesemaker to teach them “all the basics”.

“He worked with us for over a year then little by little, accident by accident, we got there. We put the ricotta and mozzarella in the 2008 cheese awards and won. We were gobsmacked.”
While that early recognition helped a lot, it was still hard slog at times. “It’s been a long journey,” Helen says. “When we started I had to just build one account at a time. We had great support in those early days from chefs like Peter Gordon, Geoff Scott and Tony Astle. Tony was wonderful. In our first year he bought a kilo of cheese a week and I swear he didn’t use it.” 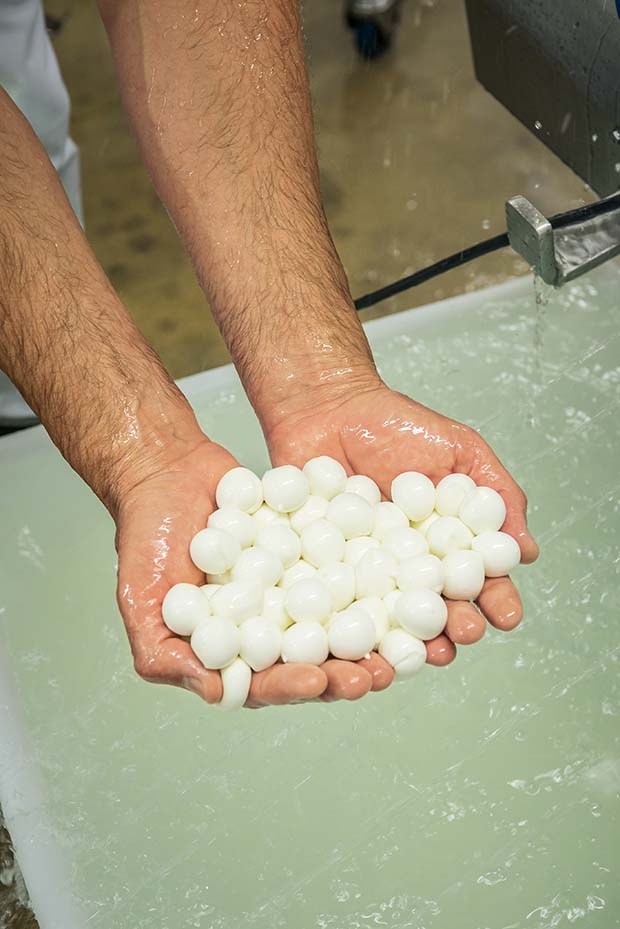 Their fan base has grown exponentially since. Clevedon Buffalo Co products – which now include yoghurts, ricotta, mozzarella and bocconcini as well as the new marinated fresh cheeses – are still sold at the Clevedon Farmers’ Market as well as around the country. The Dorresteyns’ milking herd has grown to 150 and production has improved significantly thanks to selective breeding.
Helen jokes that they wish they’d known they were going to be farmers when they bought their 14ha bush block in Clevedon (“we would have been able to buy a farm back then”) but for now they lease two blocks of land: 24ha near the sea for the milking herd and almost 50ha for dry stock and bulls. The cheese is made in a small Papakura factory (fitted out by Richard) and they’ve gradually employed staff to share the load, including a herd manager and relief milker. Richard remains the head cheesemaker, as well as managing the farm, feed and crop rotation.

More stories you might like:
10 key tips to marketing a profitable food business in New Zealand: Advice from Kelli Walker, Valerie Manna and Martyn Atack

“People think cheese is romantic but when you’re a cheesemaker you’re cleaning most of the day,” Helen says. “For years it was just Richard and me and we’ve learned a heck of a lot.”
“People have no idea what it takes,” Richard adds. “It’s good fun, but high pressure and you can’t muck it up. I still get a buzz every time I make a cheese.” www.clevedonbuffalo.co.nz Porcelain-white buffalo milk contains nearly 60  per cent more calcium and 40 per cent more protein than cow’s milk, but 43 per cent less cholesterol. The Dorresteyns milk their herd in a herringbone-style shed that Richard has modified to suit their needs, including inventing a hydraulic backing gate and some straps to keep the buffalo tails out of the way.
“They’re too big to push around,” Helen says. “The head of a buffalo is longer and bigger than my torso. They won’t hurt you on purpose but they’ll do it by accident.
“They’re lovely animals. Some of them want to know you, some are more standoffish. They’re all wary when you first go in, unless they know you. But after a while they’ll come over and have a sniff and start to lick you. They’re curious.
“We don’t take the horns off because they have fewer sweat glands than a cow and we believe that horns are like a radiator, so we leave them on. And they look magnificent.”