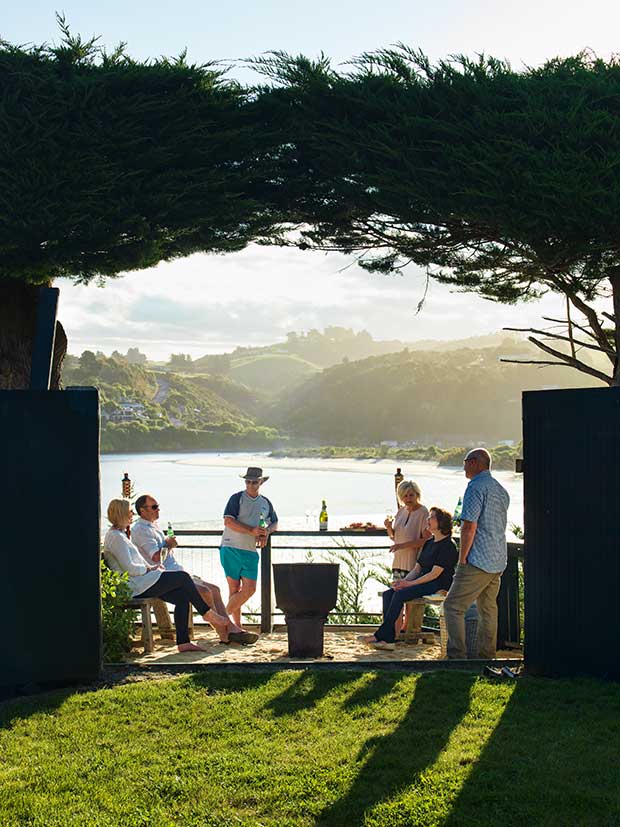 A workshop, once bursting at the joists with a lifetime of useful things, is reworked into an exceptional holiday home.

“Ange isn’t dressed and I’m stuck in a bush,” says Greg Mirams who’s six metres in the air trimming the macrocarpa. “We keep things pretty relaxed here.” “Here” is The Shed at Taieri Mouth, a small fishing village 30 minutes’ drive south of Dunedin where the Mirams family has been holidaying since about 1910. Then, beach housekeeping consisted of digging a pit to keep food cold. Today, the estuary still offers a view of constantly changing sandbars; the nights forever perfumed by lupins.

Greg grew up summering on the other side of the river mouth — the southern side — in what the Mirams now call the “old” place. The family, which includes Greg’s brother Phil and sister Sue, are so much a fixture of Taieri Mouth their aunty Win Parkes co-wrote a history of the area. Taieri Mouth and its Surrounding Districts features photographs that show the old Mirams place obscured by the marram grass that was introduced in the 1950s to control the sand dunes. 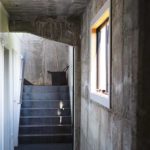 Putting in the stairs meant cutting through a bunker-thick concrete floor. 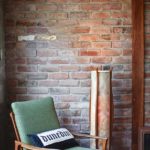 Much of the furniture in The Shed was “discovered” in the old workshop during the rebuild. 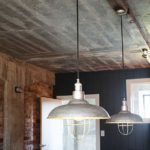 The pool table was owned by Greg’s late father, Bill.

Entire chapters of Greg’s life are bookmarked by this area. The roads were still gravel when he had his 21st in his dad Bill’s shed. The shed, 250 square metres and the epitome of Kiwi blokedom in storage form, was filled to the gunnels thanks to a lifetime of odds and sods.

“It was a ramble of Dad’s old farm stuff. He moved the farm here, made stuff, bought more and never threw anything away,” says Greg. Years later, seven 12-metre skips were filled when the building was emptied before its transformation to what it is now — a seaside sanctuary. 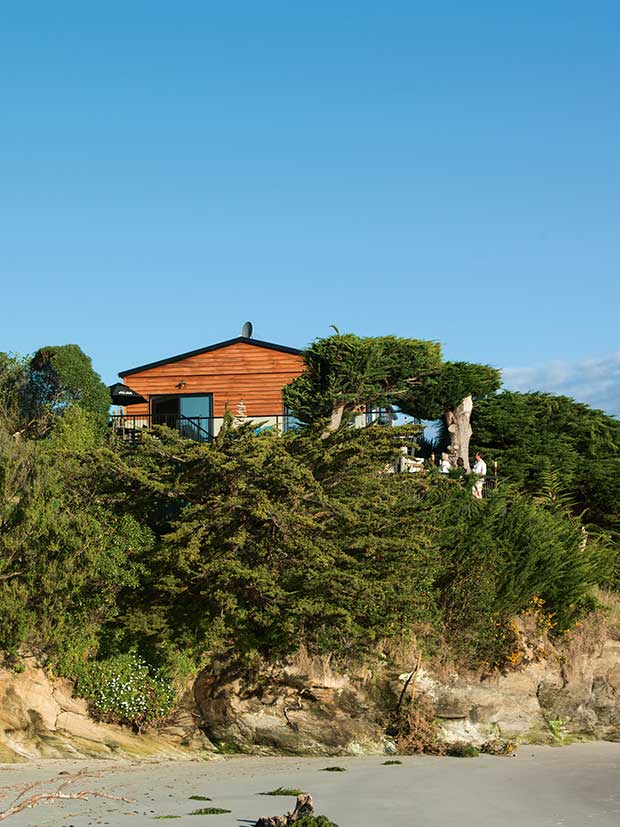 The beach is both feeder and furnisher — Greg whitebaits from the steps that lead down from the house, while Ange found a hefty piece of driftwood there that was later made into a table.

“When dad and his wife Mary moved into town, it wasn’t too tricky to turn it into the family holiday home.” OK, maybe a little tricky. The Shed is made of hand-poured concrete (laced with railway iron) so thick that three and half tonnes were removed when the stairs were put in. The macrocarpa hedge against which Greg has leant his ladder remains an important feature.

“It’s not always like this (balmy, sun-swamped). When the southerly blows, this protects the house.” The hedge is also a source of treasure. A whale oil pot made by Dunedin’s Star Foundry discovered beneath it takes pride of place on a deck the family call the Survivor deck, so named for its tiki torches, beloved of the television reality show. 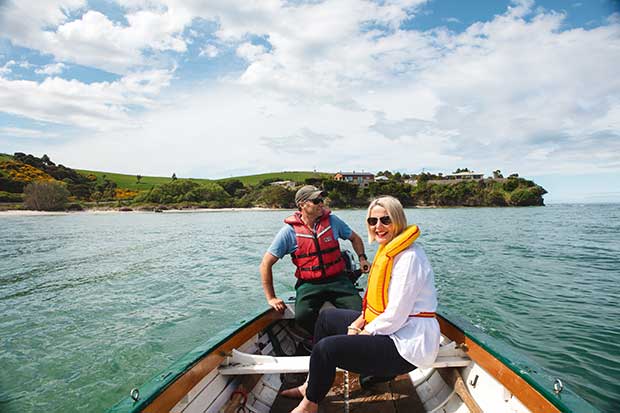 Greg and Ange in a clinker boat that has been in the family forever — Ange pinched the original oars to hang over the bed in the master bedroom.

A hammock hangs above the corrugated wavelets. “The seats were made from old timber Dad had.” Greg is a chip off Bill’s old block: a finder-keeper, maker-mender — only these days it’s called sustainability. Old water tanks do double-duty as wood sheds. The concrete bench beside them came from the old AgResearch centre, Invermay in Mosgiel, and is useful for filleting a catch. Bill built the staircase down to the sea out of old gates. The rusted railing is salted, bottom tier eroded by the powerful tide. It’s a good place from which to whitebait on a calm day. When it’s stormy, it pays not to. “It’s powerful, this sea.” The ute belonging to Bill — who had a huge influence on The Shed — is still parked outside.

So too the tide that tugs the heart. Reuse, renew and remember are the rules of a rebuild that began and ended with the kitchen table, once Bill’s workbench. It’s still in the same place, the now-clean wood battered and criss-crossed like the palms of a working man’s hands.

More stories you might like:
Ellis Emmett on conquering mountains, underwater explorations and life in a treehouse

Despite the filled skips, stuff keeps surfacing; Bill’s collected works are revealed like objects caught in a receding dune. His Wee Willy Winky candle-holders have been found and added to the table, right at the centre of things. “The only things new in the house are the sofas and the kitchen fittings; everything else is second-hand or made to go another round in a new role,” says Ange. “She’s basically a recycled job,” says Greg. A family project, the build went exceptionally smoothly. Ange would scope for bits and bobs on Trade Me, traveling to pick them up as far as Christchurch, where Sue lives. “Sue and Phil were supportive and pretty much said ‘go for it’. We had an adaptive design. Our builder — Jason Stewart of Pomahaka Building in Tapanui (who lived on site with his team) — just rolled with the changes.”

Two cases in point: an unplanned window was added in the master bathroom to expose a sea view; a living room was going to be fully lined in flat plywood until they saw what the exposed beams looked like and adapted. 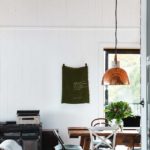 The walls in the living area may look like tongue and groove but “some poor dude in Gore” routered each line in the ply individually. 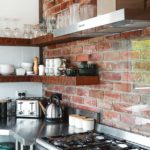 The open-plan kitchen was designed without cupboard doors so that arriving is as stressless as possible, the bricks were repurposed from another Mirams’ home, this one in Taieri Plain. 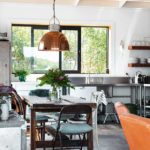 The focal point of the living area (apart from the view) is Bill’s old workbench, now a dining table. 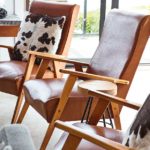 More stories you might like:
How artist Emma Bass harnesses the healing power of beauty in her floral works of art inspired by the Dutch Golden Age

“Design-wise, we were dealing with an existing building,” says Greg. “A building with which we were intimately familiar. We knew that this end bakes in the sun; that it needed a wrap-around deck; how we wanted the building to function.” With help from the wider family when possible, the renovations took two years, worked around full-time jobs. Greg runs a diagnostics company, Techion; Ange works in sales for Independent Liquor. 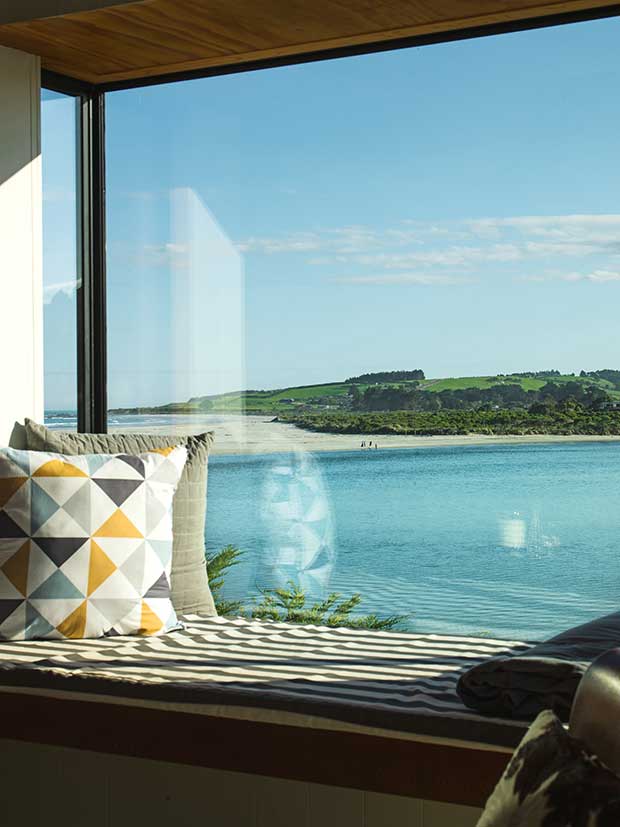 The window seat, once the cause of “should we or shouldn’t we” debates about the merits of building it is now the source of fights over who gets it first.

“The only disagreement…”
“Was there only one?”
“…the window seat in the living room.”
“He won, and it’s the best seat in the house whether stormy or a beautiful day. It’s amazing in a dirty great storm,” says Ange.
“I rarely get to sit there,” says Greg, bemoaning an idea whose success he fails to reap. “She’s a race.” 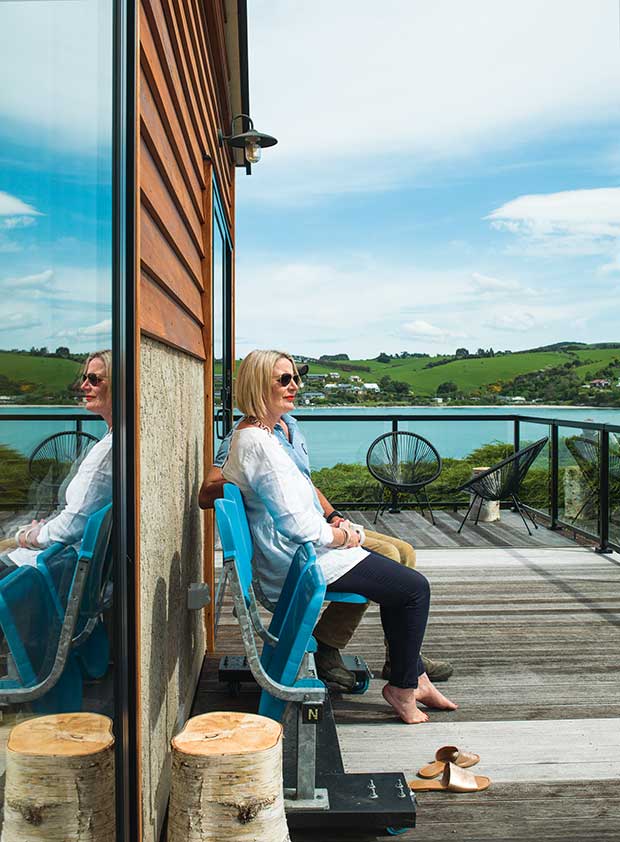 No whales for Ange to spot today, but they have been observed basking just past the breakers.

The Easter after they finished, Ange and friends went for a walk on the beach and came across a massive piece of flotsam. “I said, ‘bring your chainsaw down, I found a side table.’” It took four people to carry the waterlogged wood back to The Shed. The family named it Duncan because a) it had been dunking in the sea and b) while Ange was waiting for Greg to get there, a small dog called Duncan came and piddled on it.

The concrete floor is original and once caught drips from a hoisted chassis; Ange viewing the oil stain in the living room as a Shed “birthmark”. Pitted and chipped, the floor is unforgiving to a dropped glass. The old school bell atop the fridge was Bill’s and is used to signal “tucker’s ready” to those on the beach. The slim golden oars above the master bed come from a clinker boat that had been in the family forever.  “I want those oars,” said Ange when she clapped eyes on them.  “They’re for rowing the boat,” explained Greg. Luckily there was a spare pair. The photo above the bed in a guest room is from a holiday Greg and Ange took in Tonga and is a happy memory of getting up close and personal with the marine life.

From the main bedroom, guests can watch the clinker set out on a fishing expedition, gulls ridge-riding the buffeting wind, a skyscape of stars at night. Southern right whales have been seen wallowing just outside the breakers, fearing the oil pot no longer.Bill’s pipe is on the oak dresser in the bedroom. He passed away a year ago. A farmer, there wasn’t too much he couldn’t do, says Greg. The home is in praise of him. Bill, in an orange tartan shirt rolled to the elbows, beams from photos about the house. 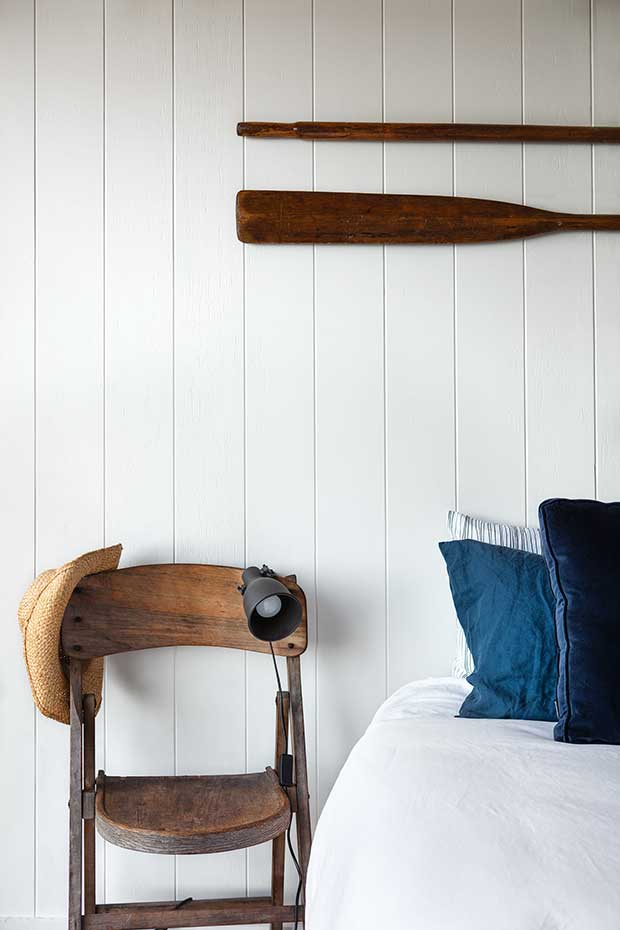 The chair in the master bedroom is another find from Bill’s old workshop.

Downstairs, through walls super thick, is the snooker room. “Dad bought the slate table home when I was 10,” says Greg. “It sat for 40 years, and he never had time to finish it.” The green baize, rolled up for a long while, was thought to be moth food but when unwound was perfect. The snooker-room fridge once dispensed Coke to small sandy hands at the Waitati service station. Greg made the lamp. “I put it up yesterday and finished wiring it this morning. Just in time. That’s how it rolls.”

One of the real challenges was finding bricks. Three thousand were needed for the walls to make rooms. But — wouldn’t you know it? — a fella down the road just happened to have some under his hedge. Taieri Mouth: where the hedges giveth and time deceives — hours often pass in the observation of the day, book lovers find themselves reading the same line over and over, eyes distracted by the view. The tired arrive and fall asleep. 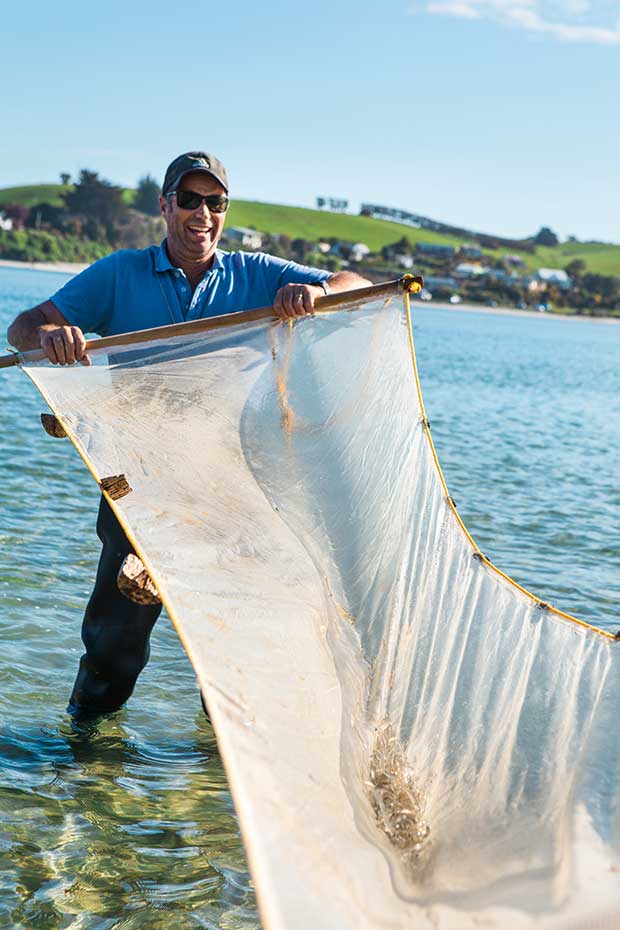 In the workshop, a hint of the vastness of Bill’s collection remains: ice skates, the skulls of sheep, cabinets full of nuts, bolts and screws, a concrete mixer, saw horses and old wine barrels. The workshop is Greg’s happy space, the place in which he creates, fixes absolutely anything, and demonstrates his knack of repurposing finds from his father’s collection of “better keep that”. “Bill has a real connection to The Shed, to what it was and what it has become,” says Ange. Out the front, Bill’s flatbed truck is parked next to the roses, exactly where it always was. “Dad and Mary loved their roses and we’ve kept them up. He’s still here in every way,” says Greg, standing in the outline of his dad’s absence, filling it the way the children of good men never wish to but are destined. The hedge is trimmed, the beds are made: ready, Shed, go. Looking forward to: “Stopping — enjoying the beach and the river and long balmy nights with friends and family.”

Listening to: “Our go-to album is Based on a True Story by Fat Freddy’s Drop. It’s the first thing we put on when we get down here.” The stereo system is courtesy of an old friend of the family — Bart, a sound engineer.

Renting: “As people have become aware of the shed, we get regular enquiries regarding its availability. Yes, it’s our family place, but we are happy to share it and already have hosted several corporate retreats over the past few months.”

Reading: A complete escape novel for Greg, NZ Life & Leisure for Ange. “I’ll buy the summer issue to get me in holiday mode.”

Eating: Blue cod, whitebait and flounder. Greg catches the whitebait at the bottom of the self-built steps leading down to the beach from the house.