From city to Central Otago: A couple finally surrenders to Naseby’s charm and slower pace of life 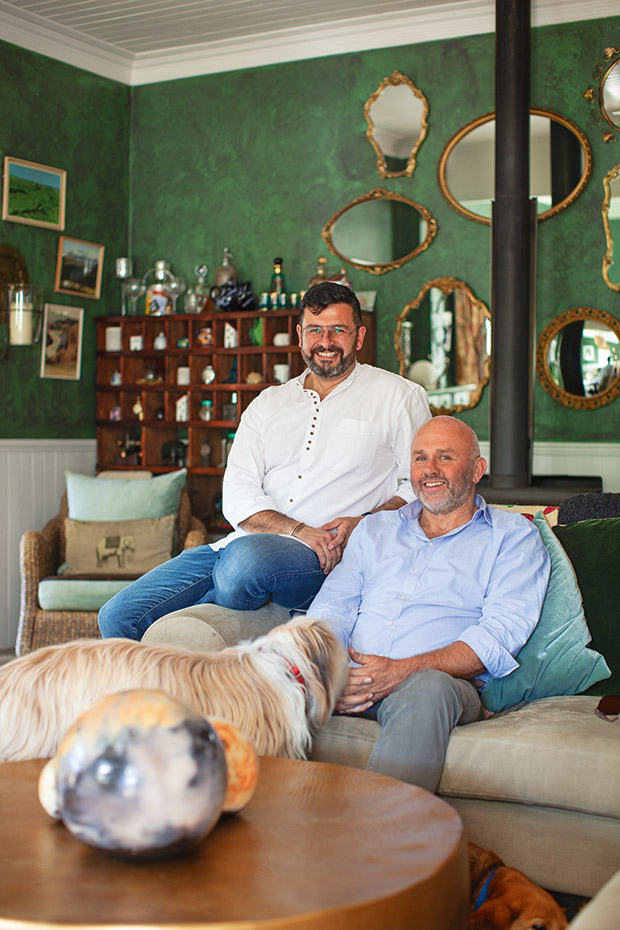 Paul O’Sullivan (left), Craig Sherson, and their dog Jennie. Behind Paul is a post office sorting cabinet he found “out the back” when the couple moved in. A bit of scrubbing and oiling revealed its charms.

If the tiny township of Naseby has far more phones per head of population than is normal, it’s entirely Craig Sherson’s fault. He is a man with a profound weakness for old telephonic treasures and thinks there might be 50 or so under his roof — a tally upon which his partner Paul O’Sullivan keeps a wary eye.

But more on this rampant phone fancying (and its domestic consequences) later. Craig discusses his morning tea with dog Jennie and visiting pooch Bo Bo. “The dogs are living their best lives here,” he says.

Craig and Paul fell for Naseby quite by accident eight years ago while hunting for a Central Otago crib they could escape to from their base in Dunedin. St Bathans had been in pole position until Naseby nosed ahead with its proximity and fancy trappings: two pubs, a café, a shop, and a museum. There were 36 houses on the market in Naseby at the time, but only one 1890s mud-brick house.

“It was just what we were looking for — old and kind of cute,” says Craig.

Such were the charms of this house and its historic gold-mining town that the couple’s plan to love it just once or twice a month was soon thwarted. “Our notion was that we’d just come here occasionally and rent it out,” Paul says. “But we were returning every single weekend. In the summer, you could leave Dunedin on Friday after work and be here, sitting on the deck with a bottle of beer, by seven o’clock. And we didn’t have to leave until Monday morning to be back at work.” Craig says he and Paul did all of the home’s demolition and painting themselves. He’s not entirely convinced about the living room walls, though. “The mud-brick surface is like an outdoor garden path, so that’s why it has anaglypta wallpaper on it. I painted it green and made a wash with grey paint. I have a love-hate relationship with it.”

After three years of toing and froing, the pair yielded fully to Naseby’s tug. Craig had cut back his Dunedin hours in business development and training for a real estate firm so that he could renovate another old 19th-century Naseby house (purchased as a project). Paul, meanwhile, had landed a new job as a medical science liaison for a pharmaceutical company, which meant he was no longer tethered to Dunedin. “When Paul’s job changed, we decided to pull the pin and come up here.”

Happily, the move coincided with Naseby’s improved telecommunication capacity. “When we first came here, there was no cell phone coverage, no real internet access,” Paul says.

“You had to walk up a hill to get a signal — which I had to do every weekend because my parents are at home in Ireland, and if Mum sends a message and I don’t respond within a certain time, she immediately thinks I’ve expired.” 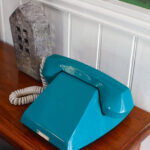 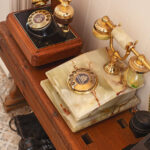 Some of Craig’s phones, including a posh marble affair from the early 1980s. 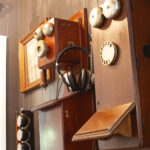 Craig adds: “We had broadband in that first year, but it was such that if you wanted to watch something on Netflix, everyone had to turn their phones off. You knew how many people were in the village by whether you could get the internet or not. All that changed in 2015 when fibre came to the exchange and sped up everything. In fact, we have better internet in this house than we’ve ever had in Dunedin.”

They added a small hut to the rear garden as an office for Paul. A taxing work commute it is not: 10 strides from the back door to the desk with views of the mighty Hawkdun Range and Naseby Forest and only a dog or two (Tip and Jenny), who are always keen for a pat, to factor in along the way. “I have no excuse for being late to meetings,” says Paul. “I can’t say, ‘I’m sorry, traffic was a nightmare.’” 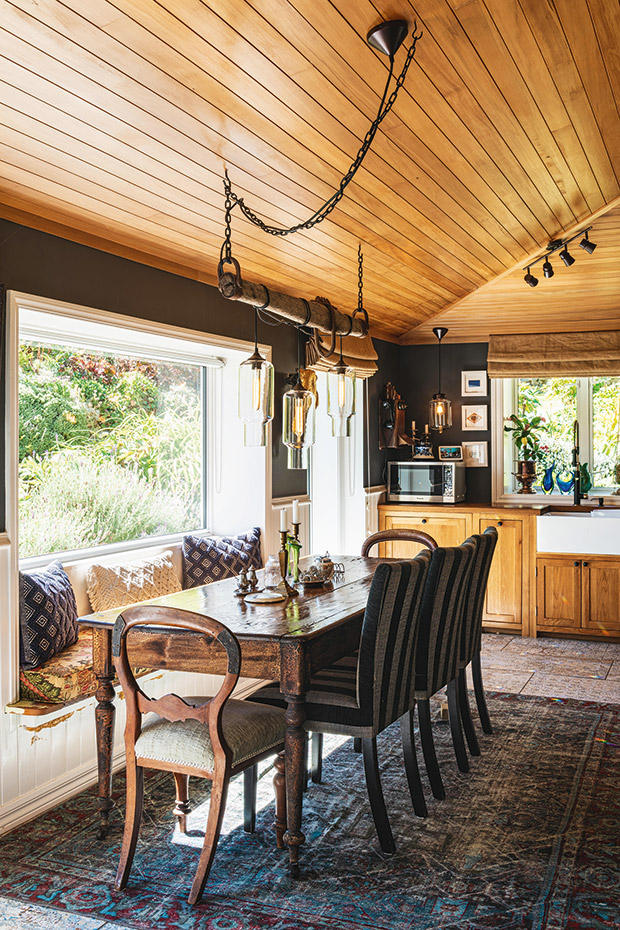 The house itself needed a bit of love to make it full-time-worthy, so they lavished it with new tiles and wallpaper, a fresh lick of paint, and some underfloor heating. (Naseby winters are brutal. A minus-12 degree Celsius night once froze their kettle solid.) The pair also turned an overrun 7000-square-metre section of knee-high grass, seedling conifers and towering broom into a profusion of flowers, shrubs and trees, with a fenced grazing area for their two alpacas, 13 chooks, two pigs and three sheep.

Once the house was spruced up, that phone collection was free to colonize available surfaces. It was Craig’s father who kicked the phone fervour off: “Dad found me an old one when I was a kid and it’s just become an obsession.” The most intriguing of the lot is a blank-faced one that Paul bought from Russia as a birthday present.

More stories you might like:
Inside Patagonia Chocolates: An Argentinian couple builds the sweetest empire in the Southern Lakes Craig describes its eerie appeal: “It has a receiver but no dial, so you were obviously supposed to just wait for someone from the KGB to ring on it and tell you that you were going to die.” There’s not been a peep out of it yet. “We have joked about what would happen if we woke up to it ringing in the night — especially in these times.”

But it’s not just phones that Craig accumulates. “Okay, so I’m a hoarder, and I wouldn’t mind living in a complete shambles if I had my way. I’m quite attached to things. If a distant family member has passed their hand over it, it’s basically an heirloom and must stay.” 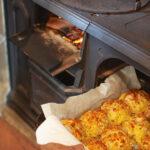 The coal range is on the go throughout winter — it is excellent for cooking and heating three radiators. 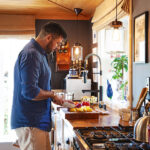 Paul’s collection of art, photography and ornate gold mirrors adorn the home’s walls. But he’s in the less-is-more camp: “I don’t necessarily want a minimalist look — especially in a house like this. You need a level of interest and activity in an old house, but I think we’ve reached a critical mass.”

That said, Paul isn’t above feeding Craig’s collecting habit. He’s responsible for the thimbles proliferating stealthily on the doorframes — something that began as a small joke: “I was on my first New Zealand work trip from Dunedin to Tauranga and was only going away for one night. Craig said, ‘I presume you’re going to bring me back a present.’ So I deliberately went into a tourist shop and asked for their cheapest item. They sold me a one-dollar thimble. I wrapped it up in nice tissue paper and presented it to Craig with great aplomb. He was horrified. So, every time I go on a work trip, I buy him another one.” 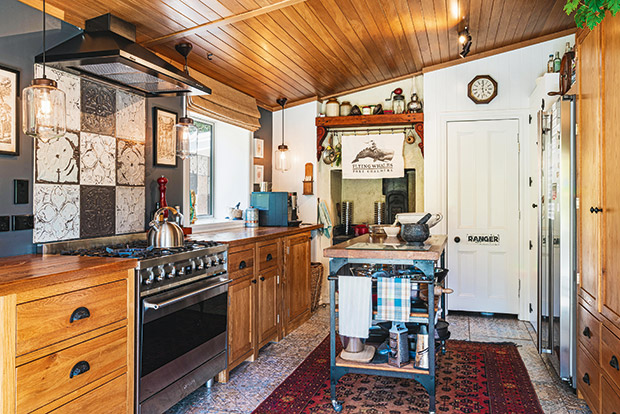 The couple chose the Spanish kitchen floor tiles for their beauty and practicality. Craig: “We got them because they’re interesting; they can’t be scratched and don’t show dirt. It gets muddy and snowy here in winter, and they’re very forgiving.” Paul adds: “A bunch of people have asked if it’s the original floor, so it’s kind of cool that it marries with the vibe of the house.” Photo: James Mackay.

When asked if they are serial renovators, Craig says, “We haven’t been serial for a while. We’ve been in this house for eight years now, and that cottage was just a project.” But then he quietly admits that they’ve just bought an old house in Kyeburn, another former goldmining settlement nearby. Is it perhaps a little more modern this time?

More stories you might like:
Zeffer Cider Co's boozy twist on ginger beer is heating up the beverage scene

“It was built around 1900. So, yes, it’s a bit more modern than our current one. We’re going to have a new aesthetic out there. We will build a sleek glass box attached to the old house with a glass corridor. I’ve been told that I’m not to be carting my entire mausoleum out there. I’ve made my peace with the fact that I will go out to Kyeburn reasonably empty-handed.” 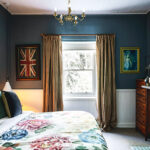 The home’s walls are host to art treasures and photography Paul and Craig have collected. 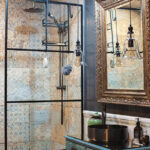 The tiles used in the kitchen were too good not to use in the bathroom. 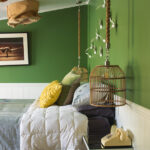 That’ll be a while off yet, though, for Craig has only just settled in behind the counter of the Naseby General Store. After snapping some knee ligaments, he needed a less physically demanding project. “I had to find something to do before I annoyed people to death.”

He and Paul combined forces with friends and Naseby cribbies Julie Ashton and Grant McLean to take on and expand the store. It’s a community-minded bid to provide their township with a wide range of fresh produce, groceries and artisan products, as well as nostalgia-rich items, such as milkshakes, cheese rolls and one-dollar mixed-lolly bags. 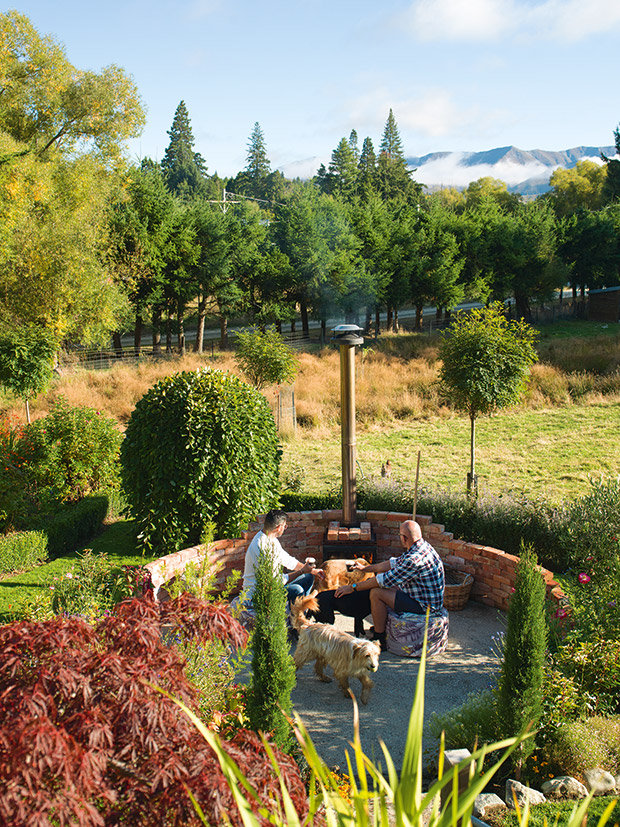 Beside the outdoor fireplace is possibly the best spot for star-spotting. Craig: “The night sky is amazing here — it’s crystal clear. About two years ago, the council replaced all the bright orange street lights with LEDs that face down. We’re at the same darkness level as Tekapo now.”

“Naseby’s important to us,” says Paul of the store venture. “We’ve been here for long enough that the success of the town really matters. It allows us to pay forward the openness and welcome extended to us when we arrived here.”

There was a bonus, too: some of Craig’s old phones were relocated to the store, helping to give it a historic feel befitting the tone of the neighbourhood. (Naseby’s lovingly-preserved 1860s watchmaker and boot manufacturer shops sit just down the road.) 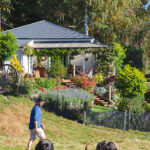 Paul with the couple’s two pet kunekune and a pig-friendly chook. 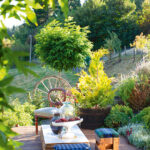 The property’s generous girth yields many outdoor nooks, making outdoor lounging a necessity (especially on the two much-loved, wool-covered Swappa Crate seats that arrived full of beer as a gift from Naseby friends Julie and Grant). 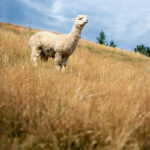 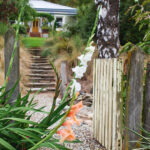 Some of the township’s locals subsequently chimed in and offered up old radios, kitchen scales and biscuit tins to help grow the store’s history-saluting atmosphere. And given that, technically, these donated items aren’t part of Craig’s “mausoleum”, they might just turn up in that future glass Kyeburn box.

“When we moved here, we got a card from somebody saying, ‘Congratulations, welcome to Naseby. You’ve increased the population by two per cent.’ And I think at the time, that was factually correct.” 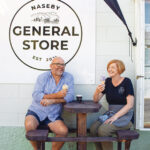 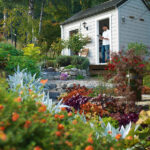 These days, a permanent population of about 150 residents and more are cottoning on to the town’s charms. Craig: “It’s not on the way to anywhere — you must choose to come here. It stops it from feeling like a transit town. There are quite a few people from Queenstown turning up here for holidays and saying it’s like Arrowtown in the 1980s.”

The town’s slogan is “Naseby: 2000 feet above worry level.” Slow living is the thing. “If you come to a place like this, there’s a different pace of doing things,” says Paul. “If you ever need help in a hurry, it’ll be there just like that, but otherwise, you must wait your turn. And if you’re happy with that, you really can stay above worry level.”