How a personalised number plate led to rockabilly love 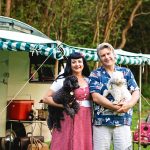 JoJo and Paul outside Kitty the Caravan with dogs Fabian and Lola. 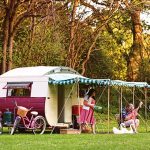 Kitty the 1954 lantern-topped caravan is believed to be one of only three in New Zealand. 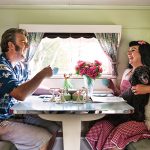 Tea for two: JoJo and Paul chillin’ and laughin’. inside their retro caravan. 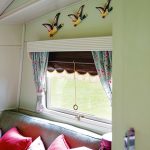 The cushions on the banquette are made from fabric found at a vintage fair. Not quite enough for a dress, JoJo’s mum made it into cushions instead. 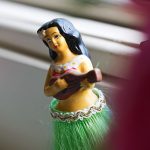 The Hawaiian hula girl on Kitty’s windowsill saw out the earthquake: “She must have been hula-ing like mad that day!” says JoJo. 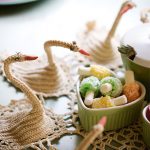 The crochet swan doily has pipe cleaners inside to make the necks adjustable. It was found in a vintage warehouse in Christchurch: “Oh my god!” I just had to have it.” 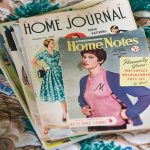 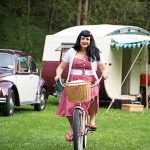 Jojo leaves Bettie the Beetle behind to go for a cycle. 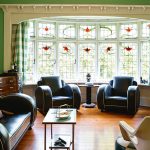 Still going strong after a 6.3-magnitude earthquake, the Nixon-Sparkes’ bruised, boarded but lovely 1914 villa is a monster mash of Jane Mansfield’s boudoir and Lost in Space. 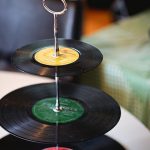 JoJo made the cake stand herself. The original china one broke in the EQ and she kept the metal bits. One night she had a brainwave: “I could use records!”, dropped everything and made it right there and then. She has since made a few for friends. 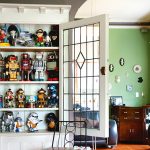 Danger, Will Robinson! No robot collection would be complete without a Lost in Space robot, officially known as the B-9, Class M-3 General Utility Non-Theorizing Environmental Control Robot. 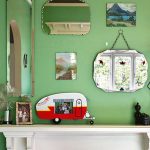 Paul made the caravan photo frame, long before the couple actually bought one. 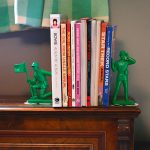 The mantel sits where the fireplace will be when the EQ repairs are finally done. In the meantime it just sits there looking pretty. 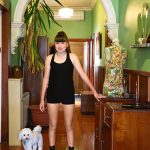 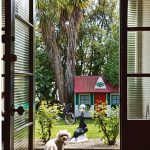 JoJo longed for a seal with a ball on its nose but just couldn’t find one. Paul saw the one outside the front door on a website for an antique shop in Christchurch and bought it. Her dad painted it up, the kids added the glitter ball and the whole family surprised her with it on Christmas Day. Overwhelmed, she had a wee cry. 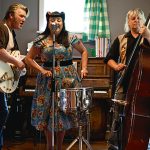 It was an office romance with a science-fiction twist that almost failed to launch due to a question of rocket fuel. Working for TVNZ in Christchurch, Joanna Nixon in admin, Paul Sparkes as an editor, a personalised plate suggesting there might be more to him than days spent in a dark room. The plate in question advertised “Sparky’s Cosmic Journey”, Paul’s then-band, a psychedelic glam-rock ensemble complete with fire-breathing dwarf. Dangling this kind of bait, how could JoJo resist asking him for coffee? “I don’t drink coffee,” said Paul.
Not put off by manly stupidity, our heroine smoothed her skirts, straightened her stockings and set her phasers to stun. Over a chai latte, lo and behold, here was Paul, running a parallel life, sharing the same musical influences – Bowie (The Who, the B-52s), the same interest in retro styles and a mutual love for mid-century collectables.

They were spliced on the 01-10-10 (“we like to keep things binary”, says Paul) between both earthquakes (“so we shook, rattled and rolled through our first few years as a married couple”) at the Loons performance theatre in Lyttelton in front of a homemade 1950s Las Vegas backdrop by a celebrant dressed as Elvis, waitresses on roller skates. And after a dozen years and 6.3-magnitude earthquake, the Nixon-Sparkes, including daughter Willamina (12) and son Pierre (15), are still going strong. Their bruised, boarded but lovely 1914 villa is a monster mash of Jane Mansfield’s boudoir and Lost in Space. “People say we’re a pair of bookends,” says JoJo. The kitchen is a kooky cocktail of kitsch and woodland creatures – demented-looking squirrels clutching their nuts, big-eyed fawns straight out of Bambi − all opportunistically found in junk shops around the country. The Carlton Ware lobster platters survived the quake, even more precious now there’s so little old china around. Hopefully the remainders are unshakeable, as “a lot of our stuff’s stuck down with museum wax”.

The original internal back-to-back fireplaces and chimneys, once dividing kitchen and living room, collapsed while Paul was on the second floor of the TVNZ building. “With time, I was quite happy it fell down,” says JoJo, with that chipper Cantabrian cheerfulness born of having lost people and knowing how lucky you are, even if your fence bricks look like teeth in a punched mouth and plywood is your new wallpaper. “It opened up the whole space.”
It also made it easy to step from forest glade to full-on Jetsons in the living room, where a disturbing number of poodles stareout from shelves and cabinets − some with holes in their heads for the dispensing of salt or pepper, others with a lighter mechanism used to ignite many a cigarette. Some ceramic mini-babies are joined by gilded chains to their mama poodles and there is one uber-
styly poodle complete with a 1950s hat and cat-eye sunglasses.

If hundreds of beady black eyes and beatific smiles freak you out, look away now. A full-size pair snooze on the couch (their feline fellows, Queenie and Alfie, are off somewhere doing the Persian version of the stray-cat strut). “I was always going to have a black toy poodle called Fabian and a white one called Lola,” says JoJo. Happiness equals oodles of poodles.
Paul likes lots of lasers and tin robots hailing from a time when child’s play was left to the imagination; the era of Forbidden Planet, Lesley Neilson as leading man, and Attack of the 50ft Woman. He finds them in second-hand stores, on eBay and Trade Me.

Often the box is worth as much as the toy, meaning the most valuable are, sadly, the ones never played with. As the century twisted out of the 1960s, toys started being made out of plastic, like his two Black Saturn Robots, one dulled by little hands, the other box-fresh. Also kept in the robot room: Sparky’s Magic Piano. Are you reminded of the radio play, Sparky and the Talking Train? So is Paul. His dad was a locomotive engineer. “Right front wheel, right front wheel…”

Swallows, three making a summer, fly across minty walls. The recent surge in popularity of the vintage scene and things rockabilly has seen a huge call for swallow tattoos. How does it feel, folks favouring as fashion something you live and breathe daily? “It’s nice that people embrace it,” says JoJo. With her victory rolls, cat-eye flicks and flouncing skirts she’s so far ahead of the curve, she is the curve.
Both still occupy the same roles at TVNZ, although JoJo’s branched into freelance wardrobe design for music videos, of which Paul produces two to three a year. Long fascinated by the politics and sociology of textiles, what rising hemlines say about the emancipation of women and the story behind florals trending post-war (dresses were made out of curtains and upholstery fabric due to shortage of material); her mum was a dressmaker who every week “would make herself an outfit on Thursday night to go out on Friday”.
It was going through old albums and raiding her parents’ wardrobes that gave rise to a lifetime enchantment with frocks and frou-frou: pinched-in waists and petticoats, capes and handbags. Leopard print and polka dots. Vintage styles from art deco to the 1940s, 1950s − even 1960s and 1970s, as long as it’s glamorous, has panache and polish. And while corsets might be authentic, “I’d rather breathe.”
Paul, aka PJ Sparkabilly, always had his own particular style, paid more attention to detail than most blokes. Musically, he remembers gravitating to his dad’s Bill Haley and the Comets album playing on the HMV radiogram in the lounge. Growing up with sisters, “He’s lovely and gentle and understands women … well, as much as any man can.”

On stage though, he’s a strumming show pony with a hitched lip and a quiff to die for, playing his beloved Gretsch White Falcon in the couple’s band, Cry Baby Jo, the name a hat-tip to cult movie Cry Baby starring Johnny Depp. JoJo sings numbers by another Johnny − Cash, albeit an octave up.

“There’s a lot of songs about wild, mean men, trainsand prisons.” She can’t wear her Russian Red lipstick while using the big metal microphone though, or she risks looking like a flesh-eating extra from Dawn of the Dead.

Rockabilly is faster than rock and roll, is its rebellious, sexy sibling, combining American blues, gospel and a touch of hillbilly moonshine. As the world’s southernmost rockabilly band, Cry Baby Jo play “all over the show”, − the New Brighton Rockabilly Ball, the Whangamata Beach Hop and recently, poolside in Fiji at the International Jazz and Blues Festival.

They take to the road in Bettie, a 68 VW Beetle named after pin-up queen Bettie Page, and while her fender might wink invitingly, the two-tone beauty can be a bit of a sulk. The starter motor needs to be either sweet-talked or hit with hammer, which JoJo does by crawling under the chassis, petticoats and all. At 80 kilometre an hour, Bettie’s speedo cable starts screeching.
“It sounds like the needle is going to come the through the glass and spear you through t he heart.” She’s a diva.

“A loud diva, but I wouldn’t be without her!” Summer holidays mean an uneasy coupling (despite matching maroon and ivory livery) with Kitty the lantern-topped caravan.
All the way from Kaeo in Northland and believed to be one of only three left in the country, she’s a 1954 wood, chrome and Formica honey-pie decorated with pictures of pin-ups and poodles (of course).

Original fittings unmolested: tiny ventilation windows and gas cooker, a dinette that turns into a double bed, she came complete with a set of Melamine dishes and her original fringed roller blinds. Chilling outdoors by the side of a river, picture Paul and JoJo, stretched out on the fringed sun loungers like a postcard from your parents. Long gone, Daddy.

Breaking news: Cry Baby Jo has just received a Creative Communities grant to fund the production of a first rockabilly album to be recorded early in 2016. It will feature both original compositions and re-workings of classic boppers.

What we do while camping in Kitty the caravan:

Activities include playing old board games, Scrabble or cards under the stripey awning, toasting marshmallows, campfire singalongs and games, yarning and laughing with friends, swimming, walking the dogs. “We camp anywhere quiet near water, and prefer no power − far more relaxing as no washing (as in laundry) to do.”