From city life to the Chathams Islands: Why Helen Bint chose a life of isolation in remote New Zealand 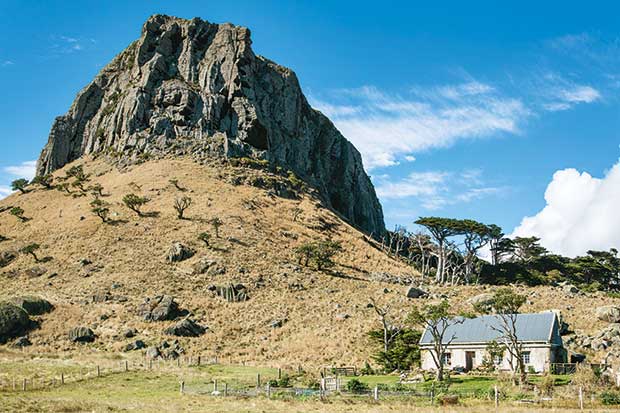 Helen Bint turned her back on the city to live a pioneering life on New Zealand’s remote Chatham Islands.

She lives alone in a Category 1-listed historic stone cottage where she spent part of her childhood, in the shadow of a massive rocky outcrop almost 200 metres high. 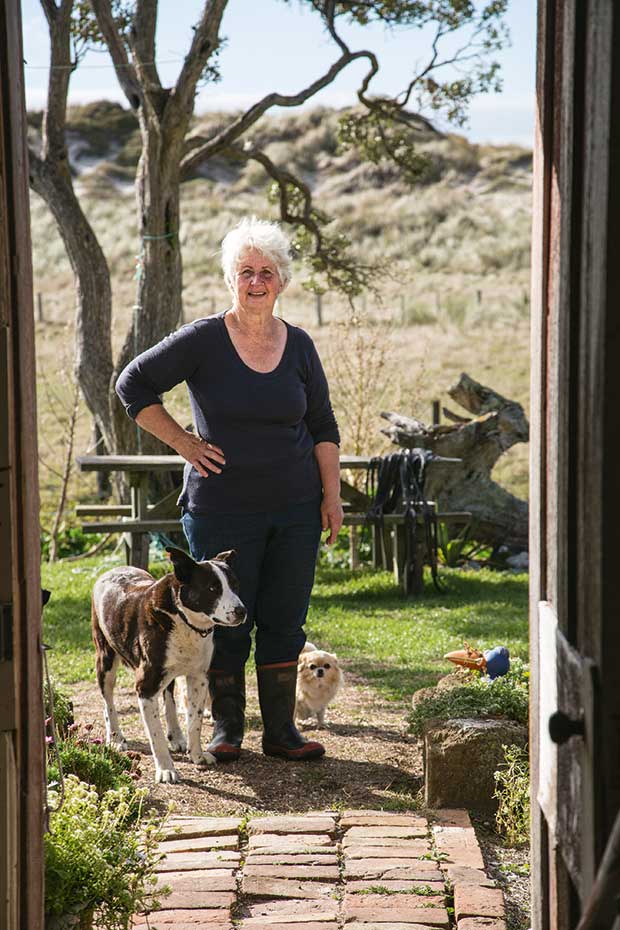 Helen with two of her companions – Wag a retired pig hunter and Pekinese-crossed-with-chihuahua Elmo.

There is no electricity and few home comforts. Her nearest neighbour, Nick Zimmerman, originally from Switzerland, lives 10 kilometres away on a farm that 100 years ago spread over 8000 hectares and was owned by Helen’s grandparents.

For a long time Helen had yearned to go back to her pioneering roots, living like the old people had lived. After raising five children and spending years in horticultural pursuits as diverse as working on hop farms, picking raspberries and the occasional gardening job, she eventually found that food and general living costs were too expensive in the city.

READ MORE: The land before time: A road trip through the Chatham Islands

That and her husband’s religious beliefs plus a mortgage weighing her down led to her making the life-changing decision to return to the Chathams. Her children had left home but encouraged her, saying, “Good on you, Mum – go off and have adventures”. The exterior walls of the cottage were originally plastered with ground shells gathered from the nearby beach. Over time the plaster has slowly crumbled away, exposing the stone blocks. A lone akeake tree frames the cottage.

It’s been close on three years since Helen made the move. In that time she has been interested in investigating the history of the house and gathering information about her ancestors; she is keen to relate much of this to an increasing number of visitors.

She gestures at the hill behind the cottage, known as Maunganui, saying it is the remnant of a volcano and hopes “it won’t do that again, at least not while I’m living here”. 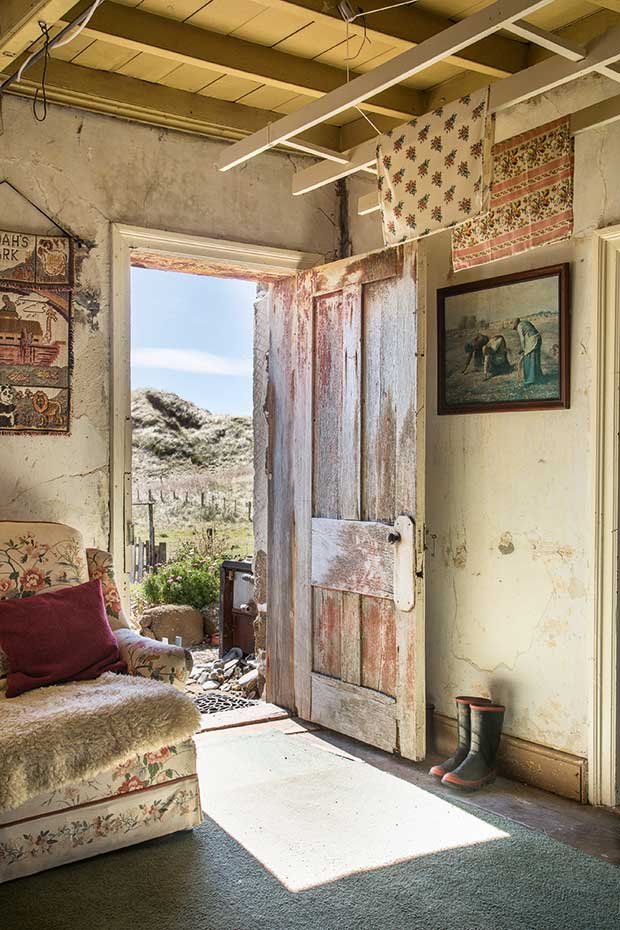 An original timber door opens directly into the main room; an old-fashioned but useful clothes drier hangs from the ceiling.

This huge outcrop came in very useful when five German Moravian missionaries arrived in the 1840s. Two of them, Johann Engst and Johannes Baucke, settled down and between 1866 and 1868 built a house with blocks of basalt stone hewn from its rocky flanks, axe and saw their only tools.

The outpost they created became known as the Mission House. Although no converts were claimed, it’s said that Engst held a service of the hellfire kind there every night. Helen’s bedroom is sparsely furnished but features her grandparents’ piano which was transported from town on a horse and sledge.

Later it became known as the Stone Cottage.

It stands alone today, a prominent landmark on the Chathams. Early photos show outbuildings, long since vanished, and the remnants of a dying forest, but the house remains virtually unchanged.

It’s a long drive from Waitangi over gravel roads and then across a paddock; with typical Island hospitality Helen warmly welcomes visitors. She is definitely on the tourist route and remarks, “I think I have been discovered. Just yesterday three young men off a yacht called in on their way to Chile”. 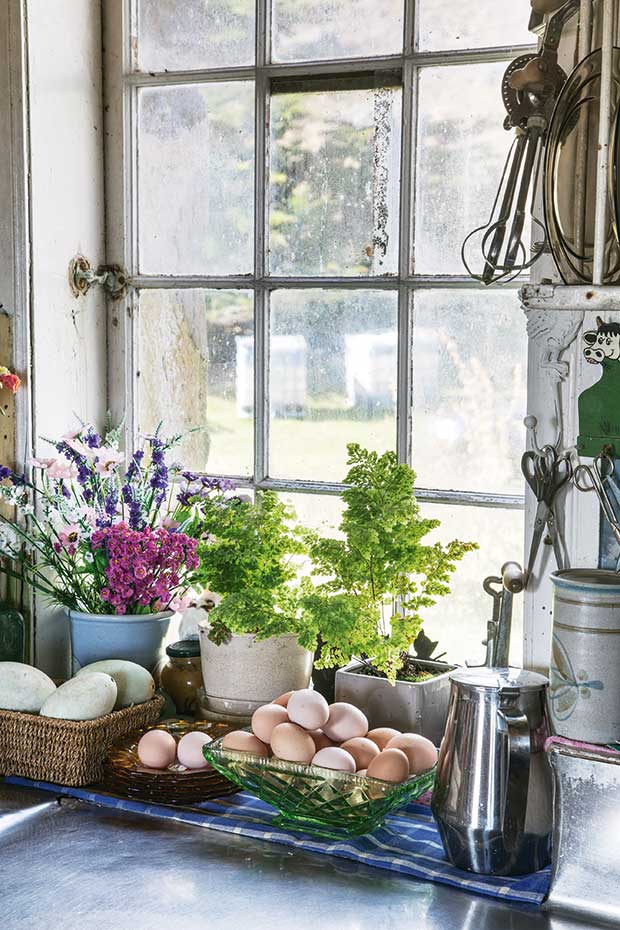 The window panes are old and fragile. They look as if they need cleaning but Helen explains they have been permanently etched with blown sand over the years.

The weather-worn timber front door opens directly onto a small room that doubles as a living room and kitchen. Two large sofas and three chairs occupy much of the floor space and the memorabilia of a long life is arranged on shelves and on the walls. A simple kitchen lines the far wall where a gas hob is one of the very few modern appliances.

It’s not possible to run a fridge or freezer and Helen says any meat or fish will last only three days. 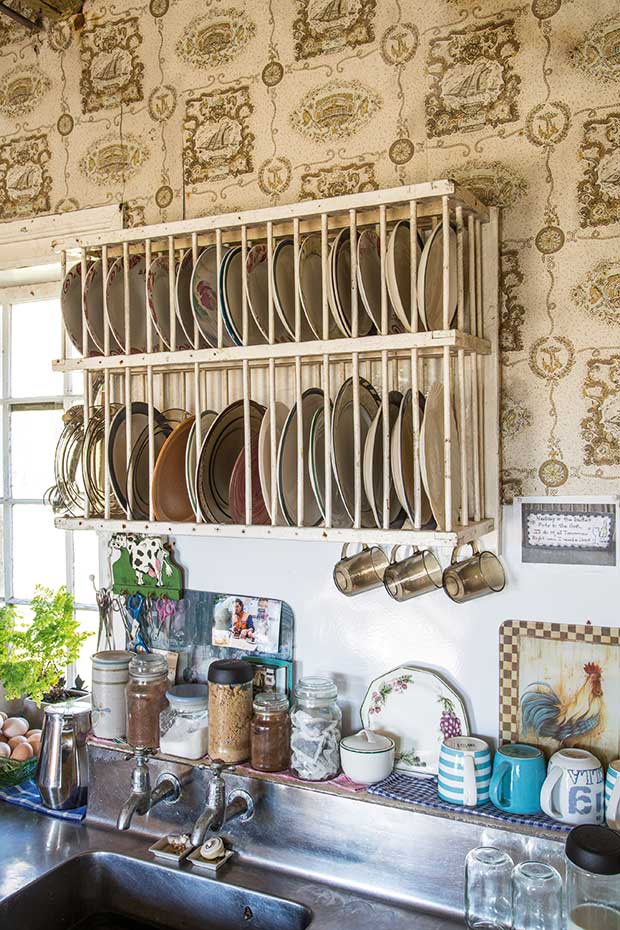 An old-fashioned plate rack saves space in the compact kitchen.

In one corner a portable radio, running off a battery charged by a small solar panel, belts out some of her favourite country music. An old-fashioned rack for drying clothes hangs from the ceiling.

That’s all she needs although she admits there’s a brand-new generator sitting out the back that has never been turned on.

There is no TV and certainly no cell phone but by some miracle of modern technology Helen communicates with the outside world by telephone and talks to her family in Nelson on a regular basis. 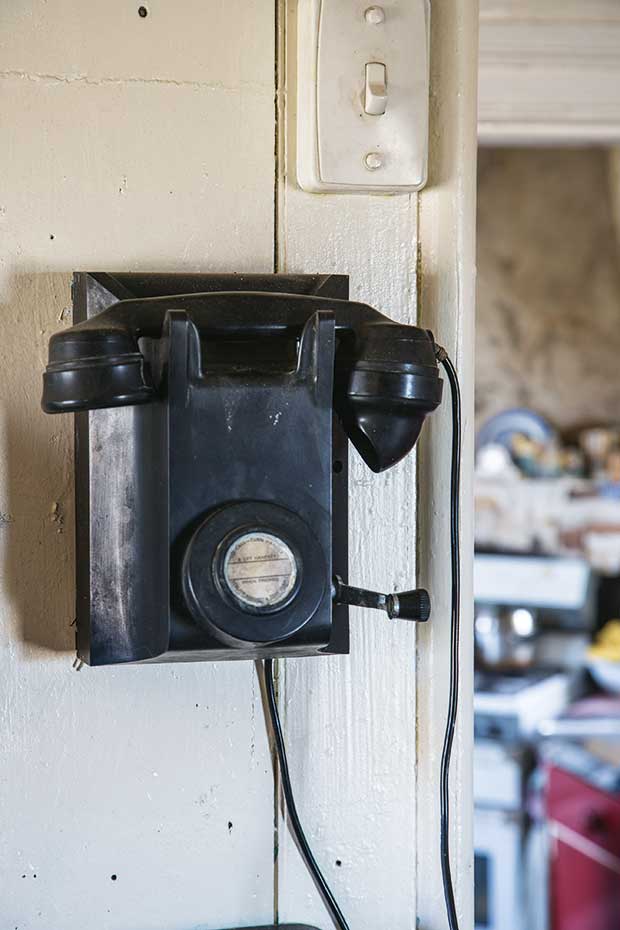 This old manual telephone is Helen’s lifeline to the outside world.

She is not fazed by the isolation. She doesn’t miss anything except her family and friends.

She goes to town in her four-wheel-drive Hilux, usually on a Tuesday, when she has lunch with her sister Shirley, collects the mail, the gas bottle, the groceries and the diesel. She thinks she is well off compared to her grandmother who got in groceries only once a year.

Loneliness is not a concern as Helen fills her time with cooking and gardening. Weka and possums are the bane of her life and her vegetable garden is well fenced to keep them out. These pests leave pumpkins and potatoes alone but it’s an uphill battle. 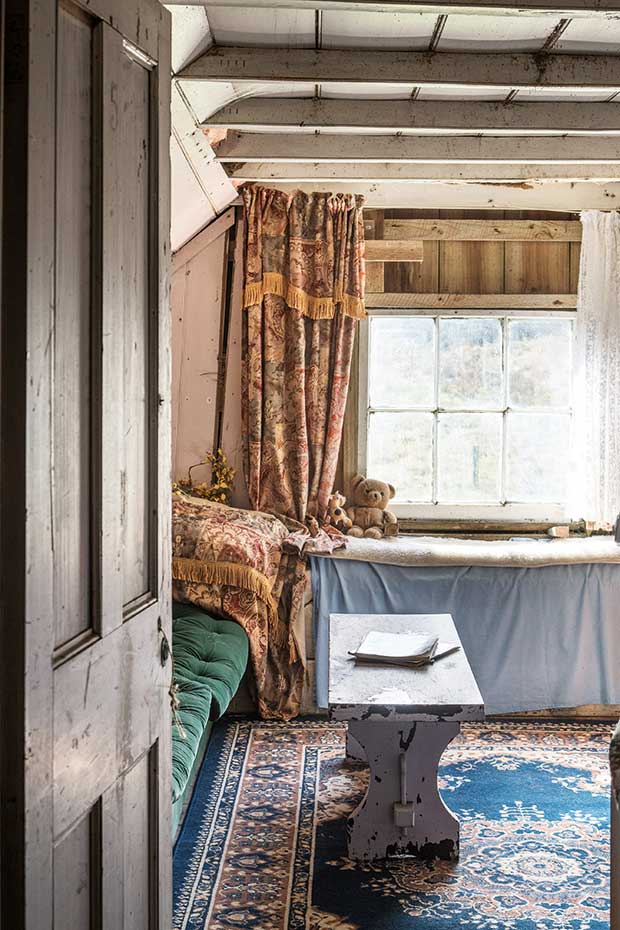 The guest room upstairs has two single beds made up for visitors but no wardrobe.

Nic Zimmerman gives her meat and apples so she doesn’t have to buy much; milk comes from her goats, eggs from her chooks and mussels from rocks down at the beach.

Walking on the beach is a daily pleasure when the weather is fine – it’s just a few minutes over the sand-hill where endangered oyster catcher birds are often seen. 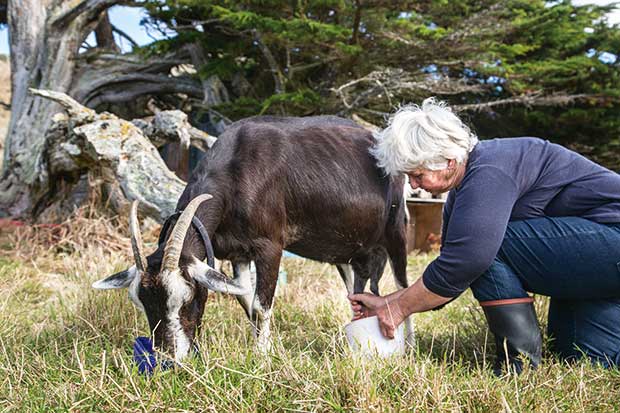 Helen milks her nanny goat Heidi once a day, getting all the milk she needs.

There are hundreds of things to do. An entertaining menagerie helps to keep her company. Jill the fox terrier is always by her side along with Wag, a retired pig dog of uncertain parentage. There’s a black cat called Tiki and two tiny bundles of doggie fluff, Elmo and Honey, said to be Pekinese crossed with chihuahua.

Outdoor free rangers include two goats, five roosters and 15 hens. Helen has a wry sense of humour. She says she never tires of the roosters crowing and it’s as if the Beverly Hillbillies are here except she hasn’t struck oil. 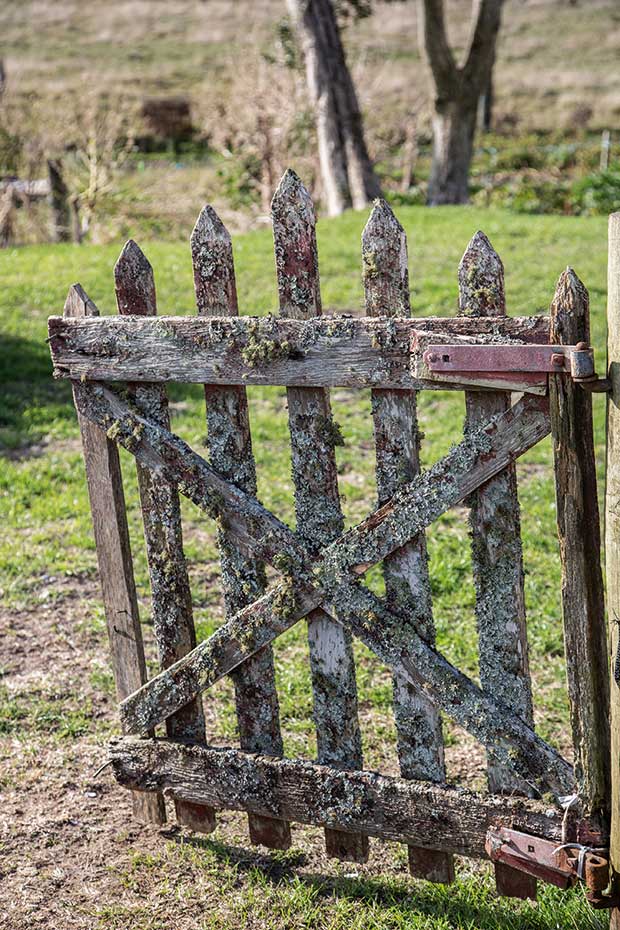 An old garden gate and potted plants on a windowsill add homely touches to the cottage.

Helen Bint leads a contented life. She misses her friends but expects to stay for years.

Besides, she has planted lots of trees and wants to see them grow tall. She goes to Nelson about three times a year to see her family but is tired of people asking if she is getting married again. 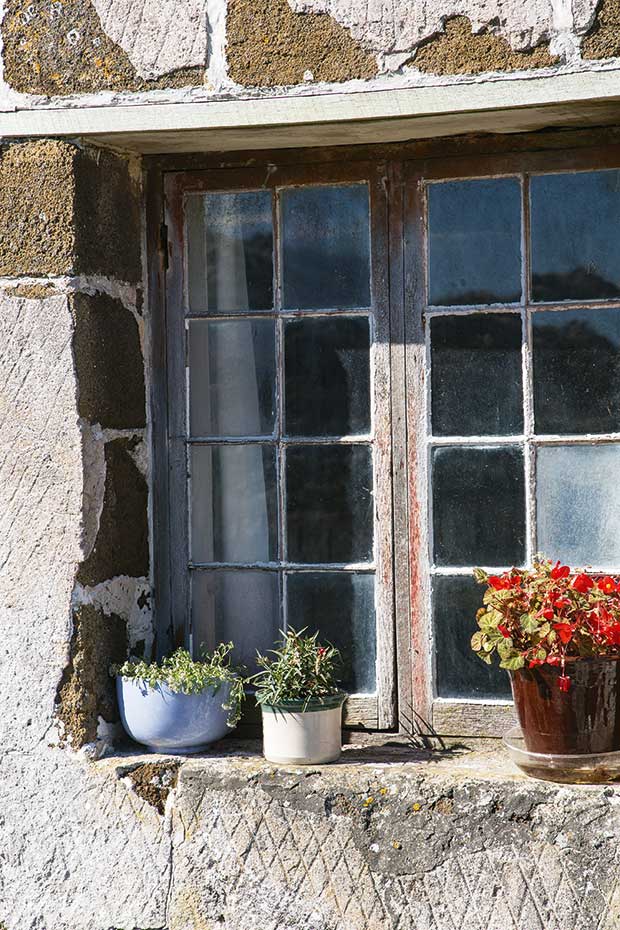 The reply comes instantly. “No! I’d rather have a carrot cake. I could have a piece every night without the consequences.”

The Chathams, population 600, are a group of 10 islands in the Pacific Ocean almost 700 kilometres south-east of mainland New Zealand and in a time zone 45 minutes ahead.

The second-largest island, Pitt, just west of the international date line, is the first inhabited land in the world to see the new dawn. A ship from Timaru lands heavy freight weekly the trip takes two days. Air Chathams flies daily to and from the mainland. The Stone Cottage stands alone beneath the volcanic remnant known as Maunganui, from which it was hewn 147 years ago. Helen’s isolation is emphasized by the view from halfway up Maunganui. Cape Pattison is seen in the far distance.

A small hand-painted sign by the Post Office makes known that the antipodes (a place diametrically opposite) of Waitangi, the island’s main township, is Alzon in France.

When Val Croon, a well-known local, was travelling around there he came upon Alzon and was astonished to see someone walking down the street wearing a Chatham Islands t-shirt.

Living costs are expensive but the Islanders are known to be resourceful. Helen Bint explains that because of the Islands’ small population everyone feels as if they are first cousins.

She says, “You know everyone and you take time to talk”; waving to passing cars is the normal thing. “The Islanders help one another and you don’t need to be scared of burglars as everyone knows everyone else.”

Weka are a common sight ducking in and out of cover all over the island and they eat Helen’s eggs as quickly as her chooks can lay them.

Unlike their mainland kin which are protected, island weka are often hunted and make a tasty dish. Sweet and sour weka is Helen’s favourite.

She suggests that after skinning and cleaning, the birds should be boiled in water for an hour, the resulting strong-flavoured liquid tipped out and fresh water added along with whatever vegetables are available – silver beet, carrots, potatoes, puha – and all should be boiled together for another hour.

The bird is tender cooked this way and is often served at celebratory events when it is called a “boil up”. Helen says that two weka make a good meal for four people.

The land before time: A road trip through the Chatham Islands in the new Holden SUV range