From Frodo’s chainmail to Kaynemaile architectural solar screens: How Kayne Horsham became Lord of the Rings 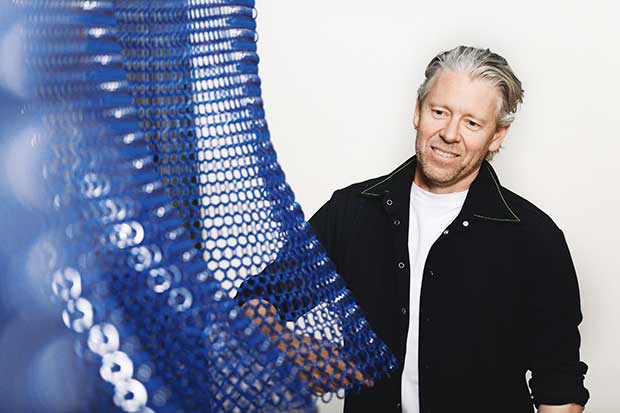 A Wellington entrepreneur who created chainmail worn by Frodo and others in The Lord of the Rings film trilogy is making sturdy armour for buildings.

Not many businesses were forged in the shadow of Mount Doom but on the slopes of Mt Ruapehu, on which Sir Peter Jackson shot Tolkien’s Mordor mountain, Kayne Horsham had an idea that is now Kaynemaile, an architectural product exported to more than 30 countries.

As the artistic director for The Lord of the Rings, Kayne grappled with a hefty problem. Steel chainmail worn by the kings, dwarves and hobbits was simply too heavy for any modern-day mortal. It weighed 35kg per person; within 30 minutes the actors were collapsing in exhaustion.

Kayne looked closely at the 2000-year-old concept of chainmail and had another go at it. His modern version of the armour of the Middle Ages is a lightweight series of interlocking polycarbonate rings – the same material used to make aircraft windows and astronaut helmets.

Viggo Mortensen, the actor who played Aragorn, named it ‘Kaynemaile’. Unlike chainmail mesh in which metal loops are joined by rings, Kaynemail is a string of linked rings. Assembly was nevertheless time consuming as the art department created each link by hand – it took one person 500 hours to assemble a single tunic.

When the trilogy wrapped, Kayne wondered if there was potential for his chainmail beyond the set. He knew that for the product to be commercially viable it would need to be created by a machine, but his idea was laughed off by several engineers.

Eventually one said yes and in 2006 Kayne and an engineer in Petone built an injection-moulding machine to create pre-assembled continuous links.

As it hardens the polycarbonate becomes a seamless series of loops. This product has strength, durability and flexibility with applications for everything from fish netting to body armour and shrapnel containment.

Kayne also approached environmental recovery groups to see if there was any interest in using the product to contain oil spills, but investors didn’t think this was a viable market. “It was a rude awakening. In the film industry, the only limit is time and your imagination, but I soon realized that the product’s infinite possibilities were confusing people. It was better for us to focus on one application,” says Kayne.

He switched focus to the architectural market choosing this industry because of global growth and the product’s potential as a façade and solar screen.

His first sale was made in China for the Jardin De Mile restaurant in Shanghai and now Kaynemaile is in use in more than 30 countries including Saudi Arabia at the Medina airport terminal, the Greater Columbus Convention Centre in Ohio in the United States, Australia’s Pacific Fair Shopping Centre on the Gold Coast and the University of Auckland. A screen at the University of Auckland.

A polycarbonate chain material with a higher strength-to-weight ratio than steel used as a façade material and for solar screening. It’s fire-resistant and can be moulded into organic shapes, doesn’t corrode and requires an eighth of the energy to create compared to metal screens or mesh.

More stories you might like:
Water cooler: Walks with the kids, recipe misadventures and a lamb update

Popular in hot climates for solar protection, it reduces temperatures by up to 75 per cent and air-conditioning requirements by up to 25 per cent. This single-chain polymer can be infinitely recycled and reused without losing structural integrity.

Early funding from Movac Venture Capital (whose previous investments include Trade Me) provided the funds to build the injection-moulding machine which cost more than $1 million. Another factor leading to early success was the slew of awards including Best Architectural Product at the NYCxDesign Awards in 2017.

Kaynemaile launched in 2007, in the depths of the global financial crisis when many architectural projects ground to a halt. The building industry is also challenging to enter for new players without a traditional construction background, says Kayne.

The long lead time can cause cashflow challenges. “We’ll talk to an architect about providing material for a job, but it’s five years down the track until we actually provide the goods and receive payment,” says Kayne. 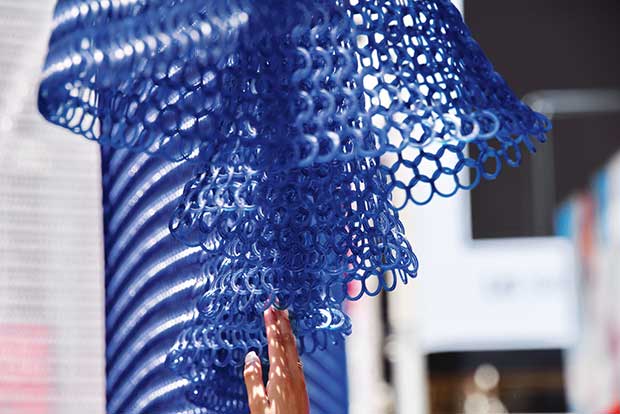 An installation for the Dubai Eye Ferris Wheel (to be part of Expo Dubai 2020) and the development of a consumer product, a prototype for prefabricated privacy screens in homes.

“In the early days, I didn’t realize the importance of making sure my whole team was on the same page and working towards the same goal. In a start-up business, everything seems trivial compared to the question: where is the next sale coming from? I’ve learned you’ll bring more ideas to the table if your team has an aligned vision.”